I wish to be mentored by George on anything and everything.

Had the pleasure of teching for George briefly in 2009. Amazing boss! Paid me well and let me jam on his guitars as I tuned em up!

One of my fave players of ALL TIME! Was quite an honor!

Fave songs would be HellChild off Lynch Mobs 1st album and I actually really dug Souls of We.

ABSOLUTE fave would be "The Hunter"

We are looking for someone that knows how to play George Lynch to a "T" or close to it.

We are a community and a large fan tribute website about everything George Lynch. We would like to start featuring videos on our site a few times a month of you riping it up..showing the tricks of the trade over athttp://lynch-fanatics.wix.com/welcome

While many guitar heroes from the '80s metal scene have faded away, George Lynch is as vibrant as ever. We would like you if your a fan of his to join are LYNCH-FANATICS Scary Riffs and start showing all the Lynch fans your Evilicious Licks, riffs...... 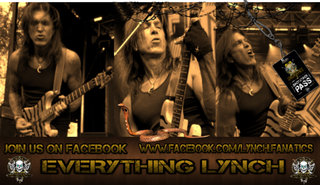 George is coming to GoDpsMusic for a live stream performance! Here is more event info  http://www.godpsmusic.com/info/george_lynch

Hey guys! First time post on here. Huge George Lynch fan. Check out my profile to see my toys. MANY Lynch related toys to include the his Mr. Scary Tiger prototype and the very first Tripler Pedal prototype thanks to the man, Gerry Ganaden. I also have one of Gerry's personal guitars. It's the Tiger with the red/orange on the outside fading into yellow center in my profile pic. Dan Lawrence personally painted this bad boy, and the Strat neck was hand made by the one and only Mike Shannon of RR fame. I love these guitars like they're my babies! I hope to hear from some of you to hear about your experiences and gear!!!

I have a seriously up graded GL 500K. I love the way the guitar plays and feels. The thing is heavy as hell, and just screams through my blackstar. I always play that guitar live check me out on you tube paying homage to the great Lynch by using his sig series to write/play my own tunes. Band Toxic Reign, influences, THRASH and LYNCH!

Back when " Tooth & Nail " came out I thought Dokken was a german band & I had a closed mind about bands outside the U.S. ,mainly because Aerosmith was getting no recognition . I was walking out of my room 1 day & I heard something on Mtv , I turned around just as George was spinning into his solo on " Alone Again " - I was totally hypnotized by him . It's funny that he doesn't really like doing ballads , but he puts such great solos in them , along with the main riffs that I don't really look at them as ballads .In Lynch Mob ," Dream until Tomorrow " is fantastic ! Ilove everything he does ,my first Kamikaze got stolen a few months ago ,I just got a new one ,T.G.! Keep on rockin George !!!

Thats a great story Anna.  I hope I do get to meet him someday.  There are a couple members on here who are really big Lynch fans and play very well.  Tony Fuentes and Jay Parmar.  Both have Lynch down cold and Tony has his tone spot on.  Tony built a skeleton guitar for George and gave it to him at a show in LA I think.  When I first started playing, I had the usual idols, Eddie, Randy, etc. , but once I heard Dokken, it was all over, it was George all the way.  I wish I had 1/100 the talent he has.  Love the Lynch Mob stuff, old and new.  Really havent listened to much of the Souls of We, Shadow Train stuff.  I'm 80's hair metal all the way, so the lighter distortion, eccentric tones kinda stuff I'm like "eh, its ok".  The KXM stuff is good, but still not 80's hair metal.  Understandably musicians evolve and move in other directions, but to me George will always be the Mr. Scary of the 80's and early 90's.

George is the reason I got serious about guitar.  I saw the video for "In My Dreams" and said " I want to do THAT".  I have yet to see him live though.  I was going to go to a show in New Castle PA, but right before the show, the bass player left and they cancelled the show.  Before that he was to be at Altar Bar in Pittsburgh with Michael Schenker, but I heard that show go cancelled too.  If I were to ever meet him I would probably be like the teenage age girls who went to see the Beatles.  I would be a nervous wreck and probably stutter like an idiot.  That is how much I worship George and his playing. lol

haha! yeah when I met him at a Guitar Clinic at Sam Ash, I was all drooling and and stuttering and stuff. He probably thoguht I was crazy. I was wearing my George Lynch shirt and everything, and my jaw was on the floor and I couldn't get it back up so I could speak properly. Then I got the KXM "ultimate fan bundle" this spring where you get a cd, poster, shirt and all kinds of stuff - including a personal phone call from George! At first I thought maybe I might not get the phone call, or that the most I'd get was just a hello, thanks and good bye that lasted for 20 seconds- but he actually called, and we had a 15 minute conversation!!  First thing I told him was that I'd probably stutter again and not be able to speak like a normal human, but then he was telling me about this one time when he met Jeff Beck when he was young- and he just totally lost his shit and his mouth was all open and he forgot everything he was going to say. So then we laughed and talked about guitar, and it was fun as hell. I'll never forget it. I hope you get to meet him one of these days too! 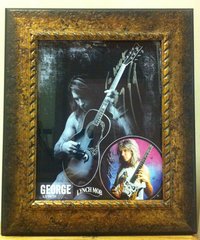 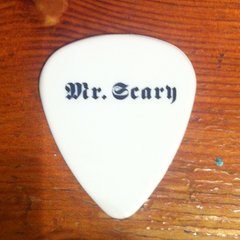 The coolest one in my pick collection!

To get this page started, I'm gonna post a guitar superhero moment from last year when I met George in NYC- the most awesome day of my life :-))))) Over the years, I've spent countless hours watching his DVDs, learning his songs, and he's ultimately one of my biggest influences as a guitar player. I wouldn't be able to play half as well as I do now without him. He keeps me inspired and motivated to learn more. Thanx George! \m/ 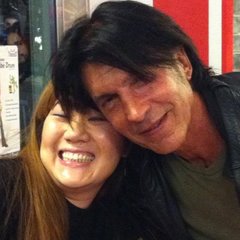