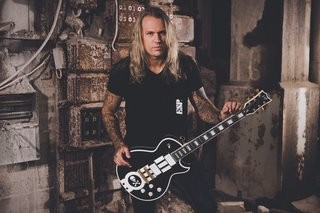 Recognized as one of the most talented guitarists of his generation in the heavy metal heaven that is Finland, Valovirta has starred in numerous domestically praised bands such as Godsplague and Drive. His first taste of international renown Euge got as the guitarist of Suburban Tribe, but the easy-going bloke that he is, for the longest time he has happily settled into his role and garnered accolades as the ace hired hand on the albums of metal luminaries like Children Of Bodom, Heavysaurus, Kiuas and others too many to mention.

Valovirta finally started to come to his own as the guitarist of the Swedish masters of darkness, Shining, where he worked alongside with demonic Niklas Kvarforth as song-writing partners from 2010 to 2017.

After quitting Shining Valovirta joined Cyhra and they released their debut album 'Letters To Myself' in 2017 year and toured all over the world for the next two years.

in 2018 he fulfilled his long-lived dream and released his debut solo album 'Easy Does It'. In a world where the vast majority of guitarists’ solo albums are self-indulgent exhibitions of technical prowess and for that very reason untenable listens to anyone but fellow guitarists, Euge Valovirta has with “Easy Does It” succeeded in creating a humdinger of a guitar album.

Featuring six drastically different vocalists and with its songs ranging from fun-loving chicken-pickin’ country music to muscular groove metal, and even dipping its toes (with Kvarforth, who else) to the darker depths of extreme metal, the album is anything but your run-of-the-mill shredfest. While gloriously song-driven and versatile, “Easy Does It” surely features enough of fretboard fireworks to satisfy the most demanding guitarismo aficionados.

2020 will be another busy year touring with Cyhra all over the world and writing new music and shooting some YouTube videos for his channel and just playing guitar in general.