Barney Ribeiro is the founder & guitarist / songwriter of Dubai, U.A.E. based extreme metal pioneers Nervecell. Known for his unmistakable super aggressive playing style and highly energetic live performances, Barney combines intricate speed and complex technique when writing music, resulting in piercings songs that can be heard on Nervecell's entire discography since the bands inception in the year 2000.
Having toured extensively around the world, supported and opened for acts such as Metallica, Anthrax, Suffocation, Deicide and Morbid Angel among many others, Barney's uses his ESP LTD Deluxe H-1001 & EC-1000 guitar models to do what he does best live on stage! 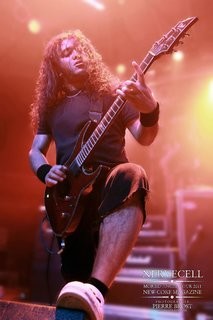