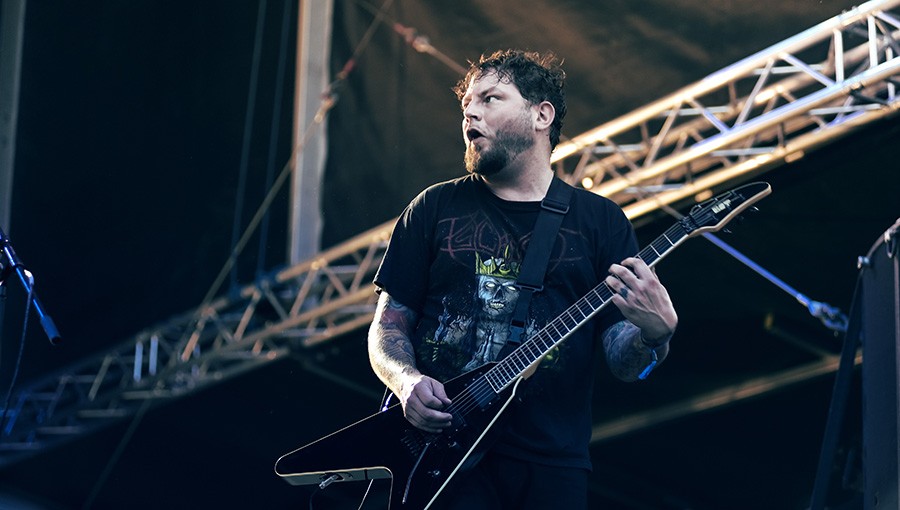 When we called Brian Eschbach, we may have inadvertently interfered with the creation of the upcoming ninth album by his highly acclaimed melodic death metal band The Black Dahlia Murder. Brian had to put us on hold; “I’m just taking my ESP off real quick.” It made us pause to wonder nervously if he’d been composing the ultimate riff that could be forgotten over the next 20 minutes we spoke. Hopefully that’s not the case.

Do you remember the very first time you heard of ESP Guitars?
Yeah, I do actually. It was years before I saw one in person. The first time I saw an ESP was in an ad in Guitar World magazine, probably around 1993 or 1994. I remember them. They stood out. A couple of the designs were very unique, and they didn’t look like Gibson or Fender stuff either. When you’re young and looking at guitars, and those brands are all you know, your mind kind of divvys it up that way.

Jon Deering, the guy I started the band with, he played a purple ESP M-III, I think it was. It was the nicest guitar I’d ever touched in my life. It had a reverse headstock. It was the most metal machine I ever saw, and I wanted one.

Did you get one?
No. I bought an Eclipse with a Floyd Rose off eBay. It ended up being the guitar I played most of my entire career.

You’ve since had a number of our guitars. Tell us about your favorite ESP models.
That’s a toughie. Guitars are almost seasonal, in that you relate to whatever guitar you’re using on a certain project. It’s tough to decide when you’ve played a bunch of them. Just recently, Tony (Rauser, ESP artist relations director) sent an E-II Mystique that was set up for our tuning and everything. I know it’s a discontinued model, but it’s actually my favorite to play right now, and I’m doing all my new demos on it.

But as far as my all time favorite, it’s probably the V’s that I’ve made with you guys from the Custom Shop. It’s my own design, kinda. It’s got the classic V curves along with the Randy Rhoads body style.

Most people don’t get the opportunity to create their own ESP Custom. Walk us through what that process is all about.
First off, it’s a huge honor just to do it. You start out with a sheet to fill out, and you have a lot of stuff to think about. It’s very detailed. You go over it a couple times and make all the decisions, and then send it off. It can be a long time, sometimes like 18 months before something comes back, but it’s always well worth the wait. There’s just insane craftsmanship coming out of there. For anyone super passionate about their playing, it’s an amazing place to go. 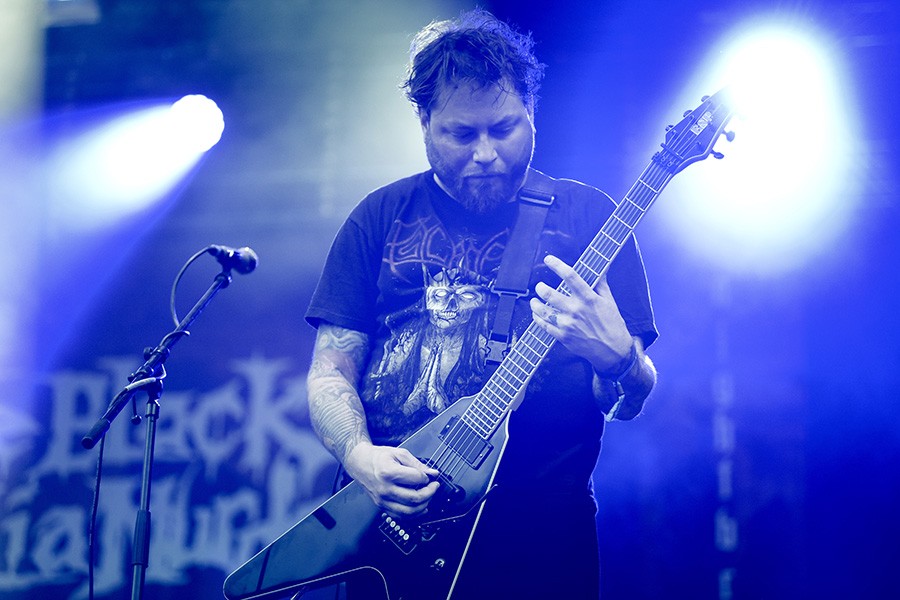 What’s the number one most important aspect of choosing a new guitar for you?
Simplicity. I’m the rhythm guitarist. I’m not doing crazy tricks and backflips with my fingers. The tone is what it is, from start to finish. That shows in the most recent one I ordered. One bridge pickup, one volume knob. It’s made to go.

What do you do to take care of your guitar on the road?
So much stuff can happen out on the road. I’m not a super wizard guitar tech. When something happens, all I can do is stare at it like a chimp at its first fire. So for me, the less stuff in the equation, the better.

The other thing is for me, I sweat so disgustingly, my guitars have to put up with a lot of acid. It’s constant maintenance as a result. I wipe that guitar down as much as I possibly can. A lot of times, you get done playing and have to get the hell out of there because someone else is coming up, so there’s no time to do much, but I do wipe it down. Between shows, I change the strings and take the blocks out of the saddles to wipe that down too.

What pickups are you using on your ESPs? EMGs?
I’m a creature of habit. EMG 81s, man.

You play a couple of different shapes of ESPs, including an Eclipse and the Custom V you mentioned earlier. Does shifting between different kinds of guitars affect your approach to playing?
It’s a good question. If I’m playing one or the other… let's say the Eclipse or the V. If I’m playing one as my main guitar, it’s not a good idea to switch in the middle of a show because of how physically different they are. Your arm has no spot to rest on the V, while you’ve got more area to move around on the Eclipse body. So yes, the guitar does affect the playing style.

The feel of a guitar, from balance to the actual shape of the neck, can matter a lot.
Yeah. I lean toward the ESP thin U. When I grab another guitar that doesn’t have that neck shape, it feels a bit weird because the ESP thin U has been my wheelhouse for so long.

How old were you when you started playing?
I was 12. It was never a very educated affair. I just tried to figure out songs I was listening to at the time, which was underground pop punk of mid ‘90s.

Were you just self-taught, or did you take lessons?
I did a couple of lessons at the time, but I didn’t really learn theory or technique, really. I’d go in with a song I liked and say to my teacher, “Hey man, can you tab out this song for me?” My folks would help pay for the lessons, but I was such a screw-off in school that they cut the funding, so that was that. 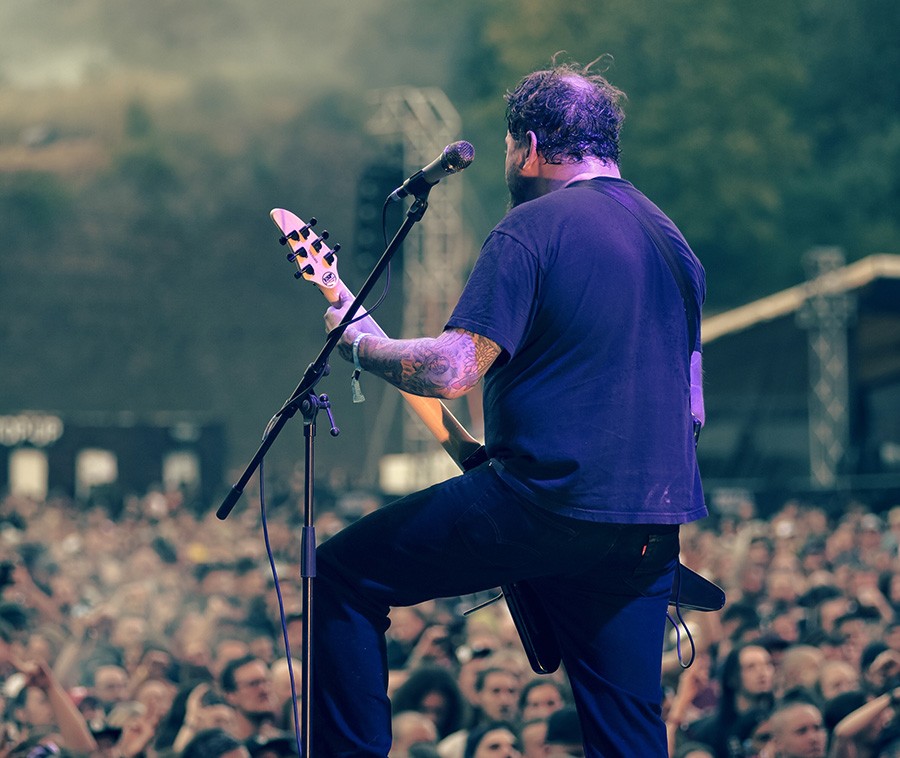 The Black Dahlia Murder has been around for something like 18 or 19 years-
It’s 18 years. I know this specifically because the other day was February 13th, and that was the 18th anniversary of our first show.

That’s awesome! So, having been around that long, what are the biggest challenges to sticking with a band for the long term?
Everything else in life that isn’t the band. That’s the biggest challenge. Trevor and I are the only original members left. The cast has changed throughout the years, and the reasons for that aren’t always clear to everyone. Sometimes the person isn’t the right fit for the band. Sometimes the band isn’t the right fit for the player. But they all contributed to who we’ve been, and are a big part in what we are.

Most musicians and songwriters have this balance where they continually hear new sounds that might be cool and potentially influential to them, but also feel this responsibility to deliver the kinds of music their fans expect to not disappoint them. Have you dealt with that?
I mean, sure. We’re working on our ninth album right now. There’s no way to keep everyone pleased the entire time. Early on in our career, I remember trying to be strategic, and writing songs to please people who expected us to sound a certain way

The fun part is letting go of that. At the end of the say, no matter what we do, it’s going to sound like a Black Dahlia Murder song.

Everything going well so far?
Yeah, I’m stoked. People are going to like this stuff.

Do you have anything you do that works well with your creative process?
I sit down with my nylon string acoustic and just mess around. I usually put TV on to ignore my own brain. I just fart around until something sounds cool. Once I have 2two or three ideas or riffs, it’s off to the races. I’ll visualize what that rest of the sound is supposed to be. It’s an awesome experience to let go and do what the idea requires.

You guys just did that big metal cruise.
Yeah, 70000 Tons of Metal. That was a totally insane experience. I can see why there are people that save up and go every year. It was a reawakening, a little bit.

How so?
In our experience, we go to festivals where there’s tons of bands, and we play but we’re not always able to see other bands or hang out. For the 70000 Tons cruise, everyone was stuck on the boat for four or five days. You had no choice other than to just experience it.

Typically, it’s a huge amount of stress getting ready to do a show. “Are we gonna get there on time? Will the PA work?” There’s so much crap to deal with. On the boat, everything was handled and it was awesome, man. I saw a bunch of bands, and drank way too much. I loved it.

Last question. If you met a person tomorrow who said to you, “I’m 14 years old and started playing guitar last year and I got a band together with my friends and we’re getting pretty good. What should I do next?”, how would you answer them?
I’d answer with questions. “What have you done so far? Have you written any songs? What do you want to write?” It’s tough because not everyone is at the same spot when they’re starting out. I guess the one thing that’s good advice no matter who you are is, “Don’t stop playing, whatever you do.”

Keep up with Brian and The Black Dahlia Murder on their web site.

Keep up the good post ! You realize, a lot of persons are hunting around for this info, you can help them greatly.  candy crush soda saga

Omg it all started with this guy for me! I own every album! That's the OG!

Brian is such a funny guy, I love him

Brian is the man! I only wish the interview was longer.

He definatley deserves a signature model at this point.