Hey guys! As noted in the article, I'm an ESP Graffiti/Queensryche guitar fan. I pulled them out and snapped a couple of pix, so I figured I'd post one here for my fellow Ryche fans. Please share pix of your Graffiti's or Queensryche ESP's. I'd love to see them! 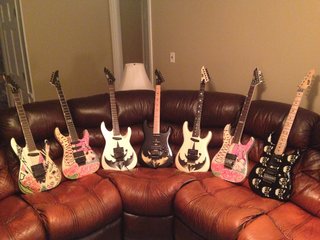 For Lynch fans, here are a few more super rare Lynch guitars I have that didn't make it to the "couch shot". Guess I need a bigger sofa. Wifey says "I" need a bigger house.

First guitar was a Custom Shop guitar made for GL around 2006 if I remember correctly. (I'll have to double check the paperwork on the year)

Second is the elusive Serpent II.

Third is a Kamikaze/pre-"GL-1" prototype. Other pix in my profile photo album.

Fourth is a first run 1986 Japan only M-1. Square neck plate and full sized strat head are the biggest give-aways, but there are other clues as well.

Fifth is another first run Skulls & Snakes with the short strat style head that wasn't pictured with my other S&S's above. It's my understanding fewer than 50 of these were produed prior to the more popular pointy headstock. However, I've obviously had no problems finding them. Let me know if you're looking for one. These guitars are attracted to me for one reason or another.

Okay, so the last one isn't a Lynch model, but damn, it should have been! Heck, maybe it was. I'll have to double check with GL just to make sure. This guitar was assembled at the 48th Street shop in New York back in the day. The custom paint looks very similar to a couple of my Dan Lawrence's, but it could also be an Eddie Meeks paint job. Either way, it's bad to the bone... Sorry, had to do it. 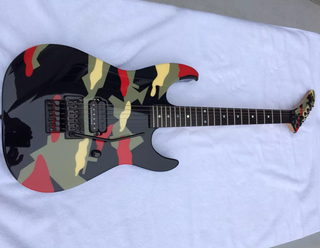 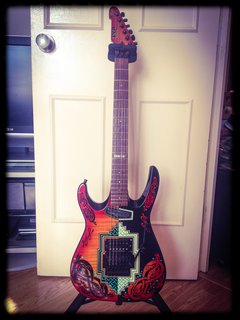 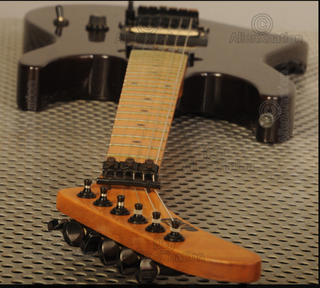 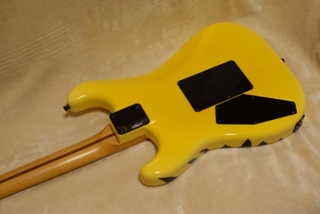 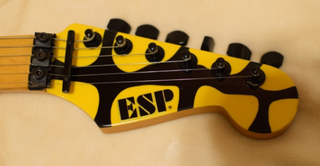 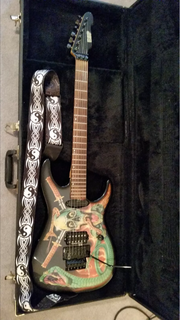 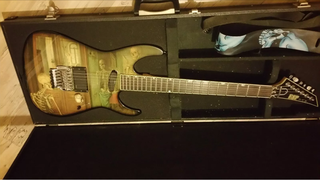 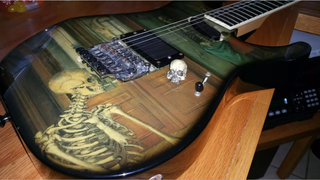 Hi Davide G. Currently, no GL-56's, but that's just by choice. I do like them a lot and actually have a GL-56 neck on one of my ESP strats. However, I'm not really looking to "complete" my GL collection per se even though the pix would indicate differently. I actually have a collection of non-GL ESP's as well that I enjoy and typically try to invest in guitars that I know I'll play (with the very rare acception such as prototypes, etc...). I'm a humbucker kind of guy, and since I try to play all of my guitars from time to time, I prefer the models with HB's.

Take a look at my photo albums if you get the chance. You'll see a common theme with humbuckers to include my ESP Tele and my Green ESP Strat...two of my favorite guitars!

Speaking of HB's and Lynch, picked this one up today. And yes, it's a factory stock Mirage Purple Tiger NTB MIJ ca. 1989. I've only seen a couple of these, but I don't know how many were made. 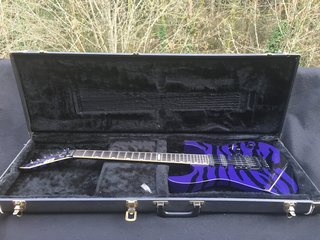 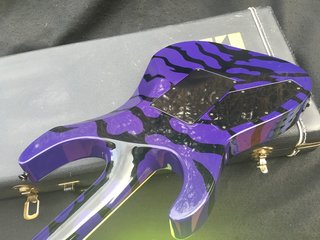 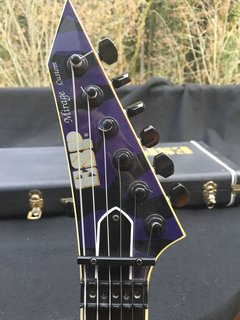 i hasked about the gl56 because  i have 2 and i don't know the story behind this guitar; mine are heavy relic but i find another version with a nos finish

I've actually seen several different versions. I don't know a whole lot about the GL-56's honestly, but I believe there was a difference in quality (at least from what I've read) between the original version and the version that came out years later that essentially could be called a "re-issue" I guess. Any GL-56 experts out there? I don't want to misspeak.

I'm aware of at least a third version that was a reverse headstock guitar. It too is a later model given the later model slanted loose lettered ESP logo. Have you seen this one? (Again, this is not my guitar) 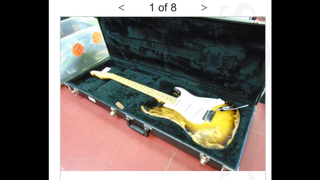 Cheers again Scott, I will check them out mate.

My Wife wants to kill me also in regards to my Hammett collection.

Just picked up another KH2, will post some pics up for the boys in the other section shortly.

I am very fortunate as here in Australia, anything under my roof and in my yard is covered by my insurance policy. I don't need pics or anything listed down on paper, anything that is in here I can claim back on insurance. I have pics of all my guitars/collectables/jewellery of course.

Trouble is...............I will get money back for my collection of guitars if they are stolen, but that doesn't mean I will be able to buy them again.

Some of mine are hard to come acorss these days, so if anything did happen it would take many years to get to where my collection is again today.

Great dog btw, I have two fat Labradors that patrol my residence.

I'm a HUGE KH fan too! That's awesome. Guess I need to go check out your pix.

Love labs too! "Dog people" are GOOOOOOOOD people!!! As for replacing these bad boys, I couldn't agree more. The vintage ESP's will be endangered before you know it...if not already!