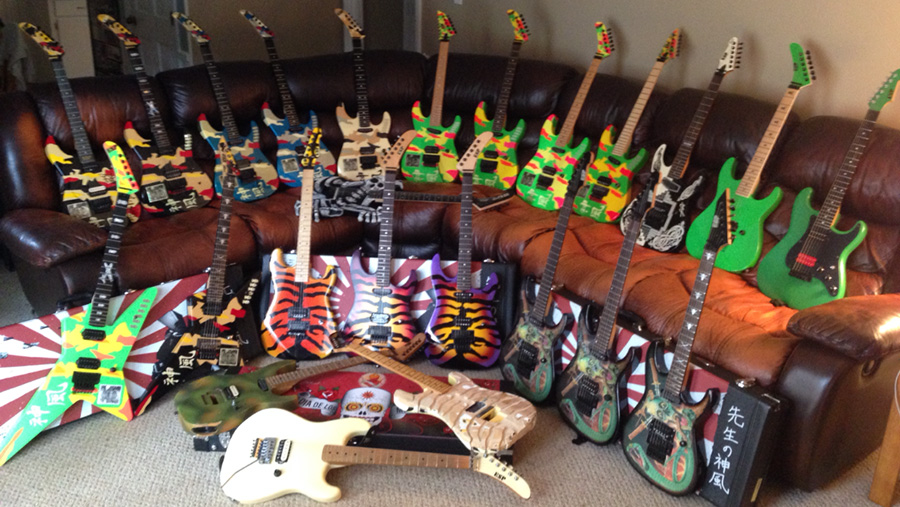 Pretty often at ESP, we receive messages and photos from people who have become serious collectors of our guitars. In all of our years, though, we never have been made aware of an ESP collection as impressive as that of Scott Campbell’s. Based in Charlotte, North Carolina, Scott describes his guitar playing abilities as “fair to partly cloudy”. In fact, his primary instrument is drums (which, as will be no surprise, he also collects).

After Scott sent in some photos which had us all dropping our respective jaws, we contacted him to find out more about what goes into building a collection such as his.

Your collection is one of the best we’ve ever seen. Perhaps the very best.
Thank you!

What got you into collecting ESPs?
I'm in my early 40's, so I grew up listening to the musical genius of Dokken/Lynch Mob, Queensrÿche, Loudness, and on and on. By nature, I'm a researcher, and as an investigator, I often tend to look closer to the details others may miss. Call it timing, luck, creativity, the internet, whichever… I've apparently developed a knack for finding instruments I have a true passion for, which happens to be vintage ESP guitars.

How did you get started with all of this?
Honestly, it all started when I bought a 1990 Kamikaze IV banana headstock for one of my four children. I can't even tell you how I came upon it, but I found it on the Internet, and it sparked a memory and a desire that had otherwise disappeared in my brain. When I was met with the response of "it's obnoxious and heavy", I gladly took it to be my own. After conducting a little more research on that particular guitar, I quickly learned how rare it was to find a banana headstock Kamikaze IV, and the rest is history. 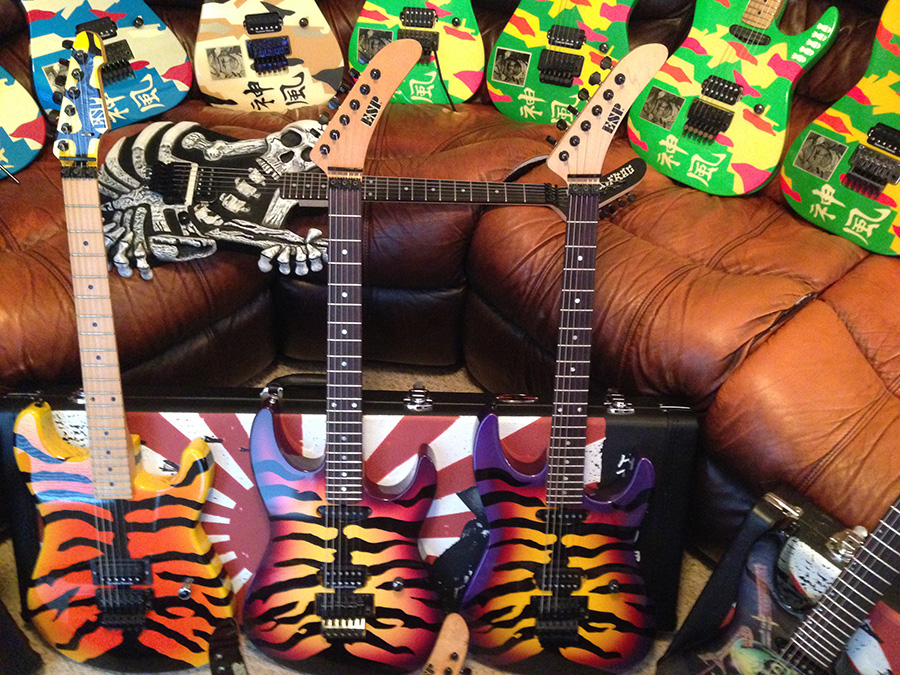 What’s the secret for collectors to find and buy the guitars they really want?
First, really research and know the history of what you’re looking at. Know it like the back of your hand. I’m certainly not an appraiser, but I know more about the guitars I collect than anyone. You have to have a passion for it. I’m not looking for any run of the mill instruments. Kamikazes for example… knowing what to look for in the color codes. A certain shade for the prototypes, and how the graphics are laid out, the Floyd Rose. When I see them posted online, I’m looking for that stuff. It’s also important to have an understanding of the fundamentals and history of ESP.

We're sure there are a lot of details to keep in mind.
Yes. Am I looking for a Sunburst Tiger, or a Purple Burst Tiger, but with which headstock? Reverse with the matching paint scheme, or first-run non-reverse with a natural headstock? People are amazed and ask, “How can I find one?” I have two! Most of all, you have to have the passion for it. 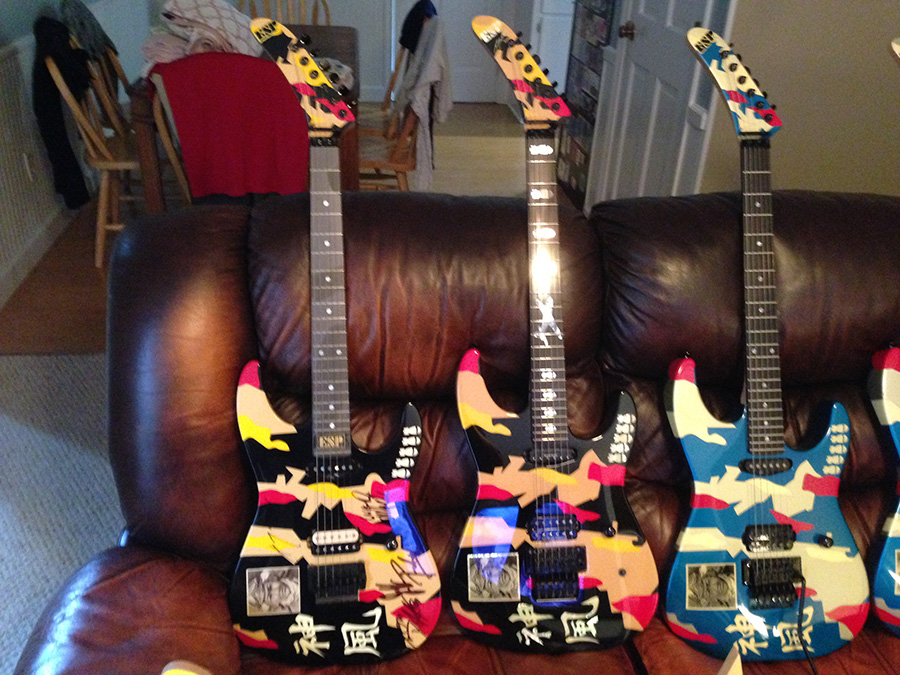 What kind of guitars do you keep an eye out for specifically?
The rarer, the better. I didn’t have another M-1 Tiger, but then I found one with the square heel and full headstock. For me, the Kamikaze II is the holy grail.

Tell us about some of the more interesting guitars in your collection.
There’s the GL-1 (pre Kamikaze I) from 1987 with a build sheet confirming it's #1 of 808. It's also signed by all four original members of Dokken, and I have the pictures of them doing so behind stage after a show. It's the only GL I'm aware of where the serial number stamped in the fretboard actually matches the manufacturers date on the tag.

I have a Kamikaze IV "8 Tooth”. George and I have talked about this one, and we believe it's the one he used in the Dokken "Walk Away" video during the solo shots. It's scalloped from around the 14th/15th fret and up, Kami paint scheme front and back, and the Kanji Japanese inlays up the neck as fret markers. I have three other Kamikaze IVs: a reverse banana with maple fretboard (super rare from 1989/90), a reverse banana with ebony fretboard (even rarer from 1989/90), and a 6-tooth sawtooth headstock signature series from 2006 or so. 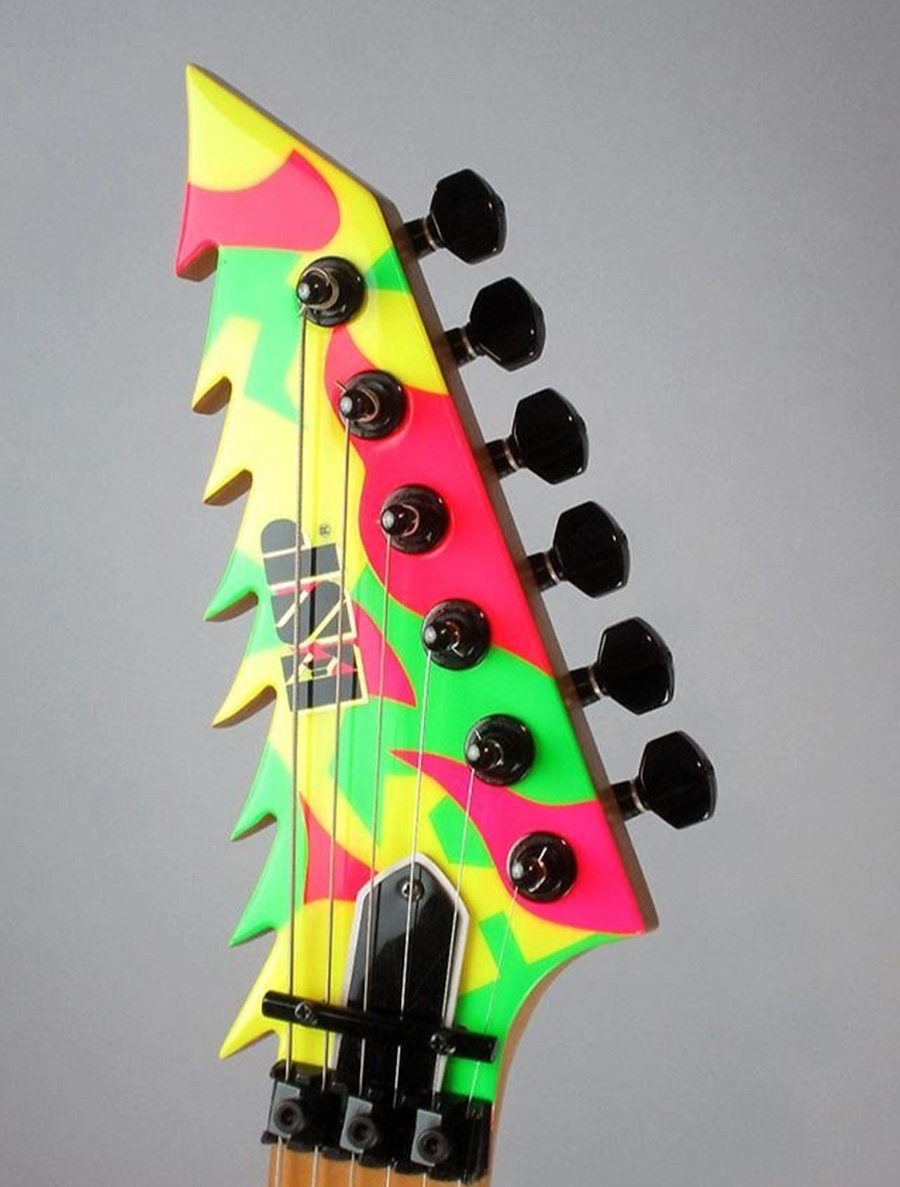 We see you also have some rare ESPs that aren’t George Lynch models. Tell us about them.
I have some Queensrÿche guitars, including the Empire-D (original from 1990), the Empire-W (original from 1990, which was reportedly played during Empire tour), a Graffiti Mirage hand-painted by artist Gene Harrison for Chris DeGarmo, a Graffiti M-II NTB also painted by Gene Harrison for 48th Street. This is the same pattern as the one Whip played during the Empire video, except this has the silver background, not the black.

Just… wow.
I have Stephen Carpenter’s first ESP NTB, which is pearl white with the infamous "fuct" sticker still on the back of the neck. He used it exclusively to record the first two Deftones albums. He’s mentioned the same guitar in several interviews where he threw this guitar out into the crowd in Ohio after being a little blitzed on stage and getting a little too far into the music. There’s also Loudness’s Akira Takasaki’s Ferrari Red "pre-mirror" random star. I believe it’s from 1983. 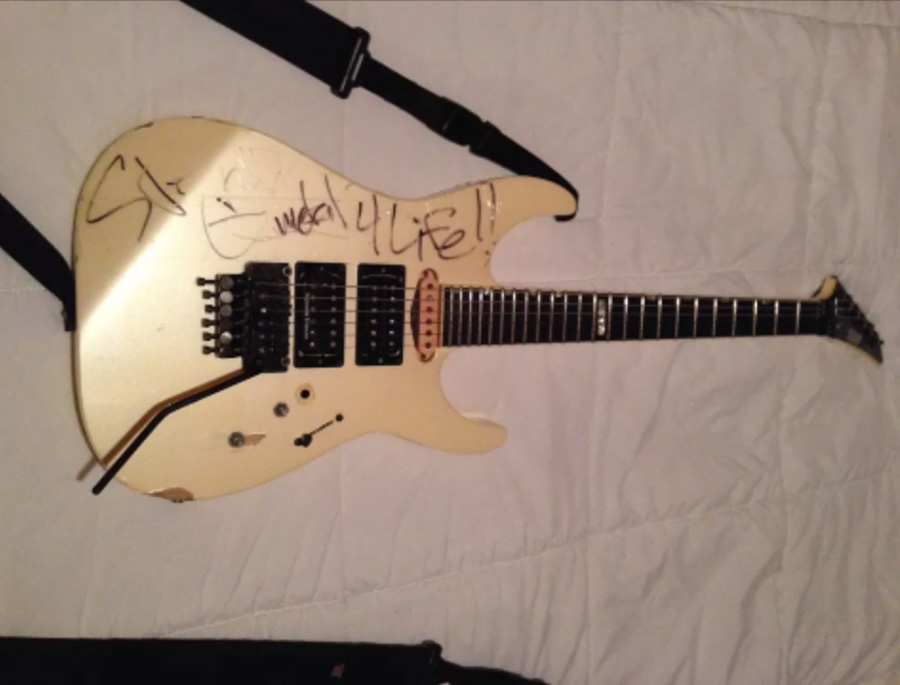 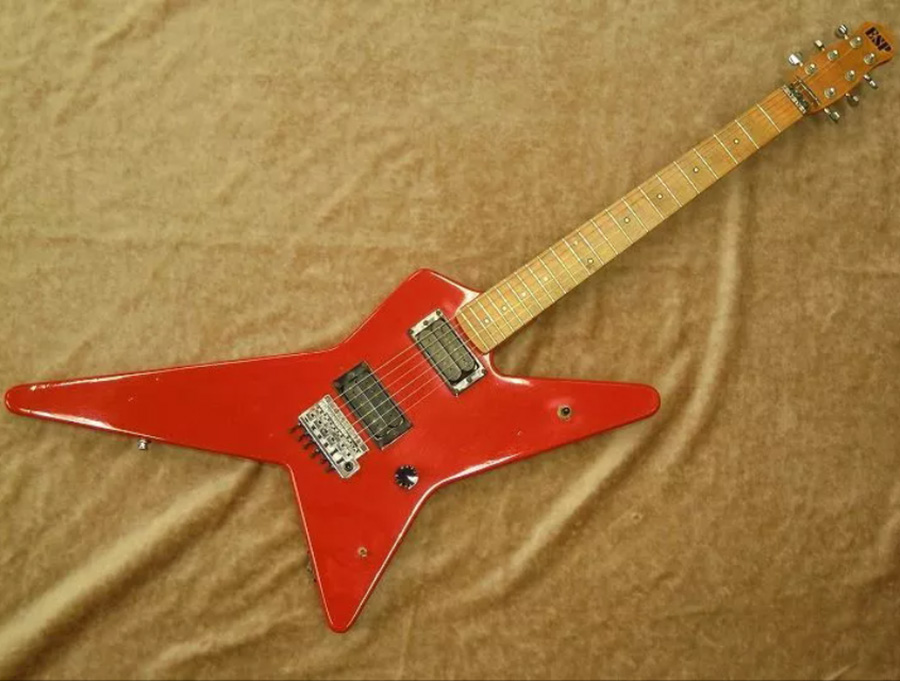 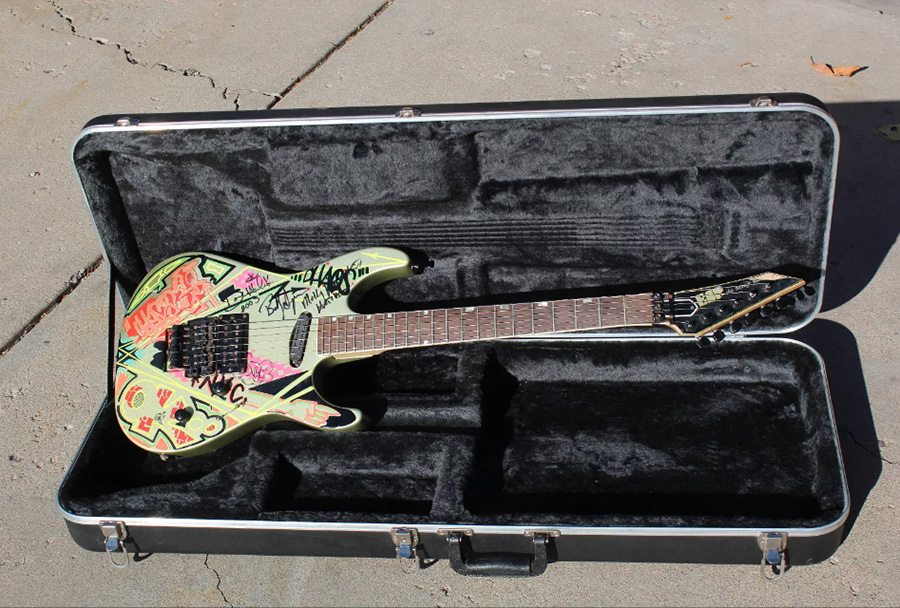 It’s just amazing. What do you intend on doing with this awesome ESP collection?
I've come across some incredible ESPs, but these guitars are actually starting to find me. I'm not sure if it's word of mouth through the ESP forums, or just looking at the right sites with the listings at the exact right time, or what. But I've been pondering building a "rock museum" or perhaps creating a road show/exhibit type scenario essentially to share and preserve the history of 80s/90s rock/metal and in some way, forward my experience to other people who were not fortunate enough to grow up during a time that is most likely never to exist again. 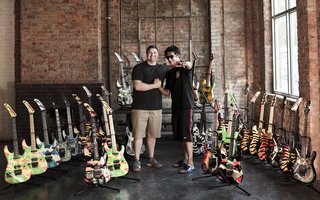 Hey Brah, I just read this interview, very nice! You truly do have a VERY fine collection. Thanks for sharing. It is mighty interesting.