The LTD Snakebyte is a Signature Series model of James Hetfield, the frontman of Metallica and one of the world's most highly respected rhythm guitar players in any genre. The Snakebyte was created based on James' own original design. It features  set-neck construction at 24.75" scale, with a mahogany body and a three-piece mahogany neck with ebony fingerboard and 22 extra-jumbo frets with a snake inlay at the 12th fret. The LTD Snakebyte is powered by James' own EMG JH SET active pickups, and includes a TonePros locking TOM bridge and tailpiece. Available in Snow White or Black Satin finishes, as well as in a lefthanded version.

Are the Snakebytes going to be discontinued?  I noticed that if i place an order with you for one it says "pre-order available in October".  That makes me worry that these are not going to be around much longer and I really want one so should I make sure to order it sooner than later?

I just got a used one and it’s an amazing guitar, but it’s missing the battery cover and screws. Is there any place I can buy another set? Tried searching fruitlessly for a while earlier.

For assistance with obtaining replacement parts you may reach out to our service department at customerservice@espguitars.com

Can anybody tell me what the body thickness of this model is? More specifically, will it take an aftermarket Evertune installation without too much trouble? Thanks

Should be about 40mm, though this instrument was designed for use with tune-o-matic bridge so you may run into some issues installing another bridge system on this. 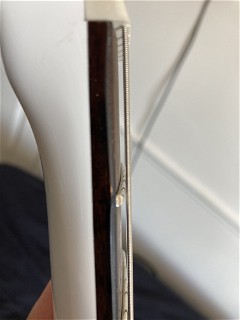 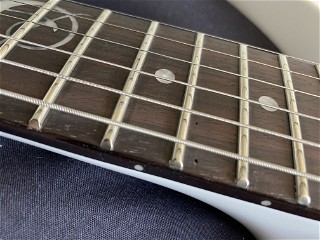 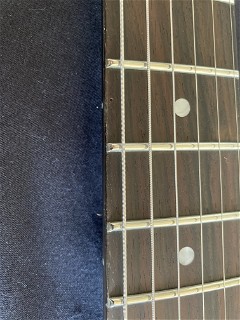 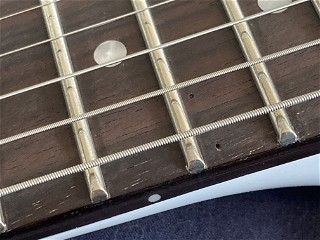 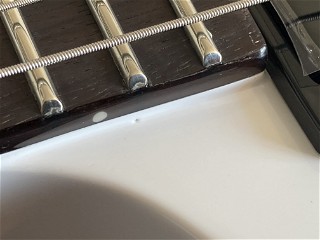 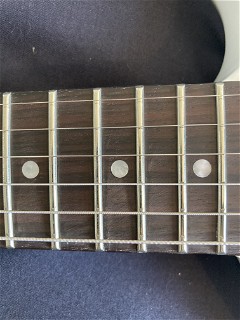 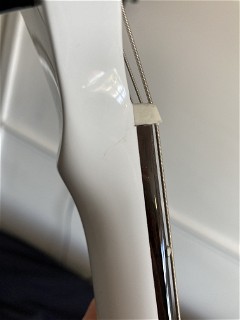 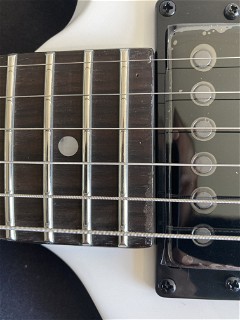 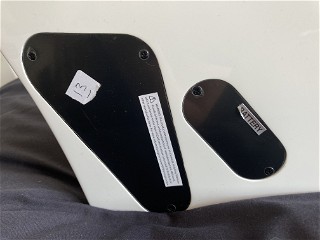 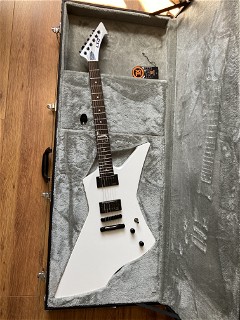 This sucks! I’m in the UK so the Snakebyte’s are pretty scarce.
Anyway I’ve been trying since december to get a good one.. this is the 3rd.. plagued with QC issues, at least over the pond here, and its gutting.

This arrived today from a major chain and authorised dealer, and it was brand new apparently just in from the UK supplier...

I mean, I have better quality photos but I’ll explain.

Theres a crack running from the nut down across the neck, and the whole area feels rough as though its laden with overspray.

There are similar finish cracks across the body in various places.

The nut itself is cut way too low on the bass strings. Its buzzing like crazy, open or fretted.

The fretboard is just a huge mess. There are random holes all over it, which from my research appear to be worm holes??

There are tooling marks across the length of it, with what looks like a tear off of the end next to the neck pup, and some of the frets themselves have been polished so roughly they look like they’ve had a years use.

The authorised dealer told me this was on order from their supplier, and so the day the store got it they sent it to me. (Friday just gone).

These usually come wrapped in the foam bag/sheath and with a little foam disc over the selector switch, but this one had neither.

It also has a random half torn sticker with 13 written on it on the backplate?! What the hell..

I mean obviously I’ll have to contact the dealer and send it back, but its so gutting. Hardly anywhere in the UK has any in stock so its next to impossible to find a replacement.

Even so, this is the 3rd one I’ve tried.. sucks because I really dont want to give up on owning an Explorer, and in white!

I believe I have some pictures of the 2nd I tried somewhere too. That was a Korean 2019 made model.

Sorry you are having such trouble with this particular model, if you'd like to send these images to our customer service department at customerservice@espguitars.com we can take a better look at it to see what is going on.  You may want to see about getting your next one from your local ESP distributor, the would import these models into your region for your local ESP dealers.

Thanks for your reply Carl.

Yeah I did contact them earlier in the week but they said as I’m in the Uk there isnt much they can assist with.

I’ve since contacted Sound Service who are the Uk distributor however I’m not sure what they’ll be able to do either, as I don’t think they sell direct to customers, but I’m not 100% sure as I havent heard from them in the last couple of days.

Currently I’m waiting for the store who are an authorised Esp dealer to collect the guitar and issue a refund.

They did mention they had another one on order from the supplier (Sound Service), but there is no ETA, and it would mean just waiting and hoping a better one turned up.

Thanks for the response though, I do appreciate it bud.

Hopefully I’ll be able to land a good one soon.

I recently received my brand new LTD Snakebyte, in White color.  I’ve noticed a thin, clear plastic film wrapped over both pick ups.  Do I need to take these off?  If so, I cannot easily take off the plastic because the plastic ends extend into the body of the EMG pick ups and will not easily pull out.  It feels like I’m going to pull up the EMGs as well!  I’ve attached a picture for further reference.  This one was made in Indonesia. 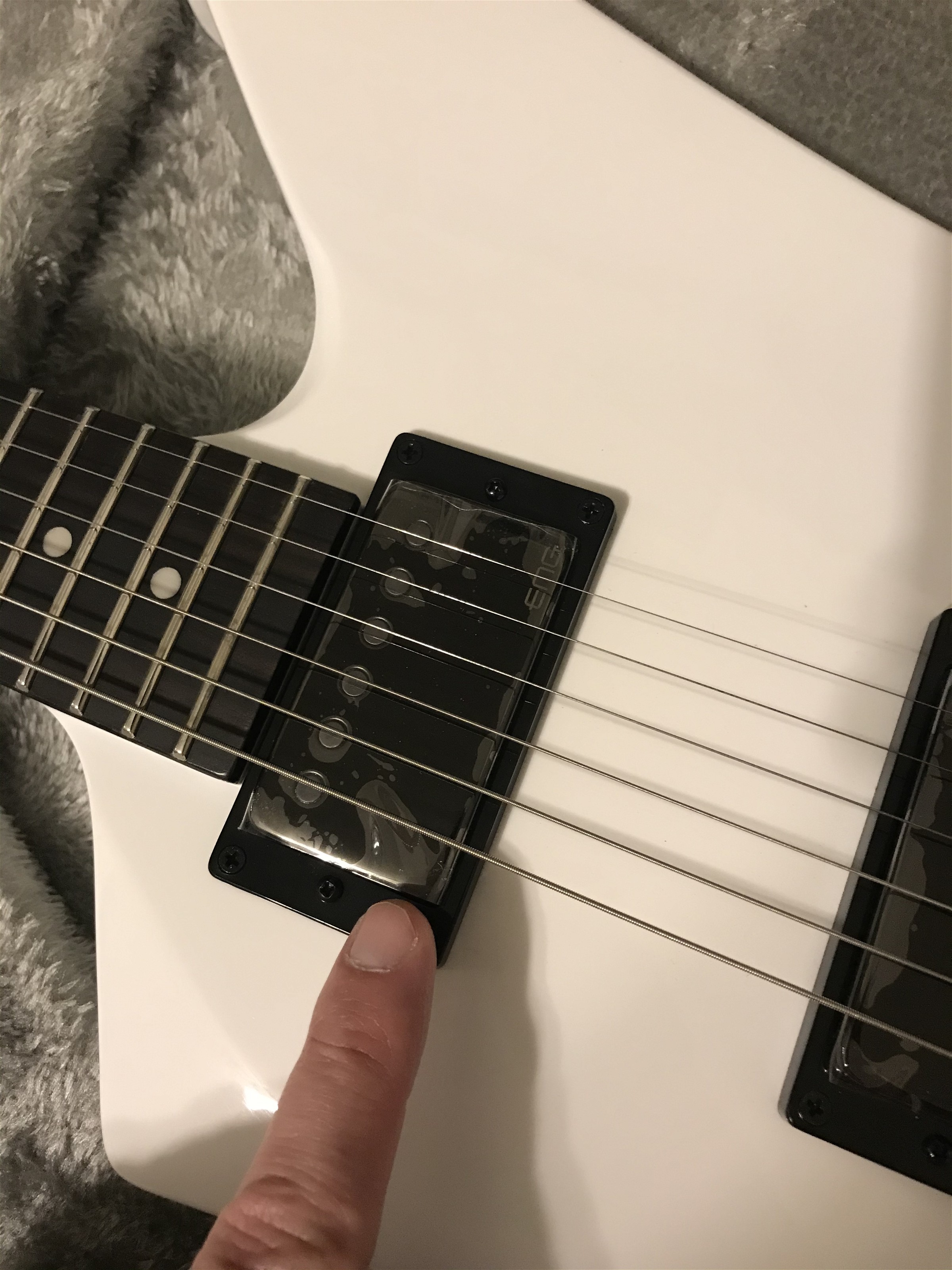 you can just pull them off, they protect the pickups from scratches till they reach the consumer