I have found a nice, used MH-103QM but I cannot find anything online that tells me the difference between it and the MH-203QM online. GC has an MH-103QM and Sweetwater has an MH-203QM, and the specs and pricing look the same, except maybe the 203 doesn't have dot inlays?

I am presuming that the model numbers are indicate that maybe the 103 is a GC exclusive?

It's the same, only the model number has changed.

Carl N. you are mistaken. Actually, through careful comparison of the specs on Sweetwater and GC's listings, I see that the 103 has a basswood body and the 203 has a mahogany body. The 103 also has dot inlays and the 203 seems to have no inlays; I don't know about the edge of the neck because I can't find any pictures of the top edge of the neck.

They both have the same electronics and the same quilted maple veneer. They also have the same scale length, hardware, and frets; so though they are very similar, there are some mild differences.

Cool, then there you go, you have your differences!

203 has block inlays on the top of the fretboard (and double on the 12). Here is a picture of mine. You can zoom in and see the blocks.

Thanks Nathan! That helps. I see that you have also changed out your pickups. Is there a reason you didn't like the ESP passives?

TO everyone else, I am trying to "like" your comments, but for some reason I can't. I also cannot reply to individual message, only to the main one, mine. Weird.

It was my first guitar with single coils, so I was trying a bunch of different ones. The LTD single coils are great and actually back in my guitar. The bridge pickup certainly isn't bad, but it wasn't as hot as I typically like. I swapped it with a Seymour Duncan JB. The EMGs are passive and went in a different brand guitar that came with significantly worse pickups than the LTD did. On my profile, you can see I used white LTD pickup covers too

. This is one of my favorite guitars all around. It needed a small amount of fret work, but it sounds amazing with that JB pickup and is crazy light. It went up a little in price since I got mine, but still worth it imo.

i got one of these great guitars

but got a serious damage issue in tremolo arm.

is there any floyd rose or other brand tremolo bridge which i can install on this guitar easily?

Hey Kasra, sorry to hear about the issues you're having with this.  These bridges are licensed by Floyd Rose so a Floyd Rose bridge would work perfectly in this instrument if you needed a replacement.  If you need any assistance with this feel free to reach out to our customer service team at [email protected]

Love the guitar. It looks and plays awesome. My only suggestion is to move the knob away from the humbucker pickup. It interferes with the right hand ring finger and pinky finger a little. Might try to recess or lower the internal potentiometer with plastic washers and put a low profile knob on the outside of the guitar. The picture is of the guitar I own. The neck/fret board feels like a smooth satin finish. ESP customer service says it has a thin coat of polyurethane. The unfinished neck look is great. 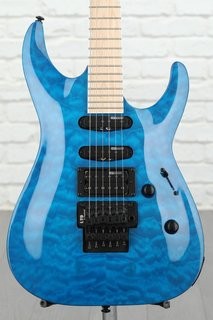 Hi Terry, Thanks for your suggestions.

would be nice to have the same model without the tremolo.

Thanks for your suggestion George.

I'm a dealer for Guitar Center I have to say for the money these are great affordable guitars the only problem the tremelo on these guitars and Jackson Dinky the Floyd Rose special needs a stronger metal for the screws ,as they seem to come back stripped because the alloy is kinda soft , I know ESP with therr quality can fix this I'm sure. I'm huge fan of ESP guitars can't wait to see what comes out next for Summer Namm