A group to share about our ESP M-II guitars.

I love the M2 style guitars, they just seeth metal!!!  Slap an urban camo paint job, or any cool paint job on it and man, an ultimate metal machine!  Some people call em super strats, I don't know if I like that analogy.  I think their in a class all of their own, referring to them as a 'strat' kinda makes them loose their hard edge.  Stratocasters are made by Fender and used for rock, country, and other less "guitar driven" genres.  I'm an ESP E2 M2 Urban Camo guitar owner, I've got 2 of em, they are freaking works of art, I still can't figure out how they got the paint job on them and it turn out so damn smooth, and the rosewood on them is flawless, they took their time when they did those frets.   I wish I would have been an ESP man about 10 yrs ago(I was an Ibanez guy)and tried out an ESP original M2 and compared it to my M2's, Hell they are all made in the same factory in Japan, just the branding name has changed.(E2)  But I guess you have good guitars and you have an occasional lemon.  I just know that these 2 ESP E2 M2 that I have were built well, cause I inspected the hell outta them, and they blow any Ibanez that I've ever owned outta the water!

Update:  I’m the proud owner of a second ESP E2 M2 Urban Camo Guitar, this is my standard tuning guitar with the other one being my Eb tuning guitar.  But man, this new one is just like the first one, a shred machine.  The only difference between the two is the camo pattern is a little different and the new ones paint job is a little darker(greys and black)other than than I inspected it thoroughly for flaws and couldn’t find a thing wrong.  ESP has high quality and craftsmanship built into its instruments.  I’m glad I got 2 good ones, ordering them off the internet and all.  Thanks American Musical Supply, and Thanks ESP!! 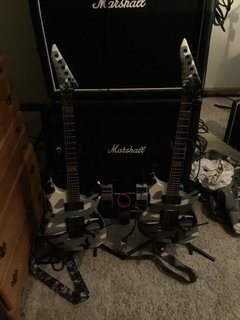 Update:  Can you believe the balls on the theif who walked into my house, in the middle of the day, with someone home, and stole the above mentioned guitar!  Took it right outta my room, my roommate said he didn't hear a thing.  Baffled the police and me.  I have insurance just for this reason, but still, the sentimental value, each guitar has its own playability and tone, and number 2 was a shred machine.  Now I gotta buy another one and break it in, and set it up how I like it, to get the sound I want out of it.  Hey at least I get to smell that fresh from the factory smell when I open the new one's case for the first time!

i just bought an E2 M2 Urban Camo ESP, i guess i'm sort of a hybrid because the E2 M2 is the new ESP standard.  I freaking love the guitar, it freaking shreds man.  i'm i die hard ESP man now.  I sold all my Ibanez guitars 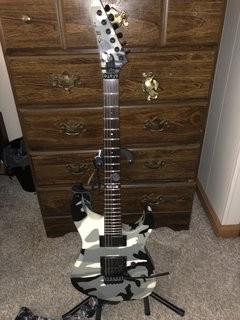 Hi elbotto00, i am not an expert in esp referencing, sorry. Maybe someone will help you