It's a pretty exciting time to be a gamer right now! PS4 is breaking records all over the place, Xbox One is taking over living rooms and entertainment centers across the globe, and PCs are becoming more popular than ever!

What are your opinions? Which platform did you choose? What games are you looking forward to in 2014?

I have a PS4 tucked away for Christmas morning, and I'm proud to say I haven't given into temptation and it's still sealed in the box.

Here's a few games that I can't wait to get my hands on:

I never played Ico or Shadow of the Colossus, but I just got both for free on PS+.

Xbox One. Huh. Isn't it weird how Microsoft does this thing where they invent things, and then find ways to make them worse? The original menu on the Xbox 360 was perfect, each subsequent "update" just made it harder to use, and less appealing.

Xbox One? Haven't heard anything positive yet. I've been an Xbox gamer for a long time, but I WILL NOT buy one of these things. I will just get more PC games, and use my computer with Windows 7.

Fuck you Microsoft. You suck.

"Xbox One. Huh. Isn't it weird how Microsoft does this thing where they invent things, and then find ways to make them worse? The original menu on the Xbox 360 was perfect, each subsequent "update" just made it harder to use, and less appealing."   sounds a bit  like a description of what esp has done to the forum.

For the first time I am considering a Nintendo handheld, with the new Mario and Zeldas looking awesome.

Will likely own a PS4 at some point.

I got the 3ds XL recently just for those..  It's pretty great.

Whats a good modern air combat & a good football game for the 360?

I'm reading TERRIBLE things about madden 25 (& the whole madden series in general) but I'm also not really seeing any better options.  I don't really care about all the super-deep features like franchise management and all that shit, I just want a good pick up & play football game.

Unfortunately, I think EA still owns the rights to all NFL games for the foreseeable future, Madden is the only one that can use NFL franchises and players. This also means no competition, so they don't have to make them great, but they are still hugely successful.

Personally, I haven't played one since 09, but I've heard they've gone downhill since, so I've just steered clear.

Still hate ghosts. gonna wait patiently for them to come out with a COD that has zombies again. Untill then it's ps3 for me.

Yeah, no idea what prompted that decision. I guess Hayter wasn't even approached.

I'm a generation behind..  Bought a PS3 over the weekend..  Kind of awesome though to wait like this, so many options for games and they're all cheap.

That said, game recommendations?  It came with The Last of Us, the newest Batman and I bought Mortal Kombat, Twisted Metal and GTA4.  Not sure what to get next and out of the systems entire lifespan, I got a lot to choose from and plenty of time before things are phased out.

The Uncharted series & GTA V, The Walking Dead Season One, Heavy Rain. The Last of Us is incredible, as are the first two Batman games.

i was a Xbox fan till Xbox said you couldn't play used games and had to be connected to the Internet For Xbox one. Traded it all in and switched to team play station after that.

Any one play the new batman yet?

Disliked it intensely except for the inclusion of young, pre-Batgirl Barbara Gordon in a couple of scenes as a shout-out.  The boss battles were boring, and the story 'twist' is a load of BS.  Would pass if I were you.  Even Arkham City was better, but IMO Asylum is still the best in the series.  Traded it in this morning.

Looking forward to MGSV: The Phantom Pain and Ground Zeroes, though I'm miffed at how it's being released.  Also, Destiny pushed back... AGAIN.  Screw you! Drive Club, do want.  Just got Gran Turismo 6 today, so far, so good.

Continuing my bitch fest, I've been playing this series since near infancy so it holds a special place in my heart. It really pisses me off that they went and changed it instead of just making one final great game the classic way ( and then maybe rebooting it later with diff people)

I do anticipate given that I can go back to MGS4, snake eater, and even SOL and still have a fucking blast, this new one should play sick. It really is a shame Tho.

Picked up an Xbox One over the weekend. Its pretty good, a LOT of issues that need addressing though. What have they done to the Marketplace!?

Also - this forum appears to have gone apeshape.

I wish one of my friends would get an Xbox One, I'd like to try it out. With the games coming out for the PS4, though, I feel that's the system for me.

I've heard nothing but good things, plus I loved Defender as a kid on the Atari 2600. Already got it with my PS+ account, just waiting 7 long days until the unvieling!

Other than that I'm catching up on stuff I missed on console.  I was REALLY dissapointed in Assassin's Creed 3... so much so that I've held off on Black Flag.  Finally getting around to Arkham City and Diablo 3 was better on console IMO.  I have to get around to DMC at some point too.

I enjoyed AC3, but not nearly as much as the others (but still more than Revelations). Everyone that hated AC3 that I've personally talked to or read online said Black Flag is incredible, so I can't wait to play it.

I started AC3 but it just hasn't gripped me like 2 or Brotherhood did...it froze/crashed once and I haven't turned it back on since :/

I finished Sleeping Dogs...thats a pretty sweet game.  I'll probably pop it in here & there for random GTA style mayhem with the kung-fu twist.

Diablo 3 is definitely a winner on the console.  There are things I don't like about the mechanics compared to D2, most notably I think would be the skills.  There isn't really much/any incentive to make more than one of each type of character.  You can change your build whenever you want to for absolutely no penalty and you get the same skills per character no matter what.  Aside from that though I love it.

I got Deadspace off the marketplace recently and have been loving that one.  I will definitely be getting the sequels when I'm finished with the first.  I usually hate paying for a game thats linear & sort of a 'one & done' type of thing.  But So far Deadspace has been worth it.

And I've been playing the shit out of the madden25 demo with my roommate (for lack of a better term...'compound-mate' I guess?) so I went ahead and ordered the full game.  Shitty reviews be damned, the game is fun.

who here is playing GTA 5, still? Finally got it on ps3 and joined my friends' crew and slapped up an emblem for us. 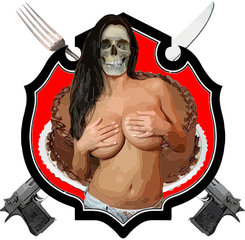 Almost forgot i also nabbed starbound off of steam. Its similar to terraria with the exception of being able to go to other planets and galaxies.

Now I haven't purchased either next gen system and it'll be a while before I do. Buy am I hearing correctly that PS4 will likely take the lead this generation? Ithought I was probably going to end up with an Xbox One first, but I am a fairweather fan and I want a winner, goddamnit.