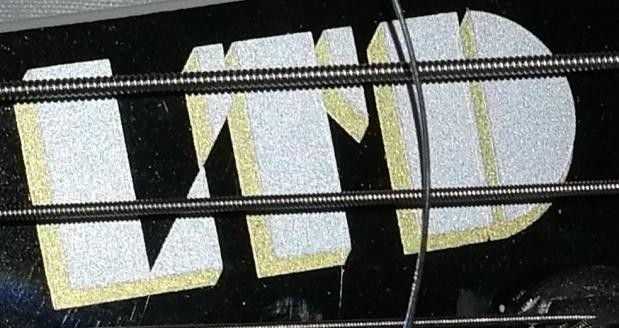 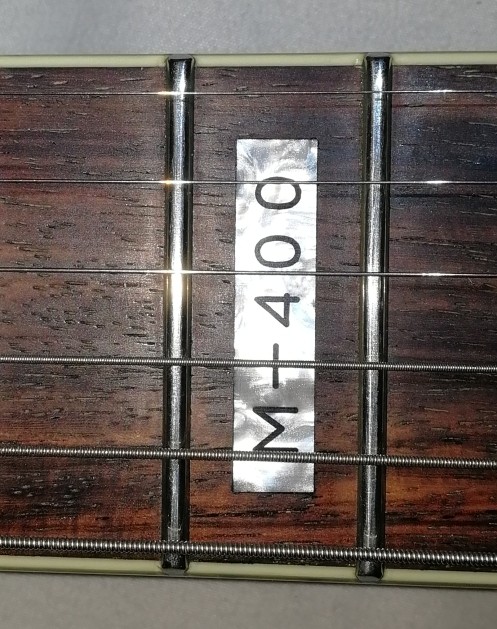 The strings are not positioned symmetrically on the fingerboard. tremolo is a bit on the side.Low E is closer to the edge than High E: 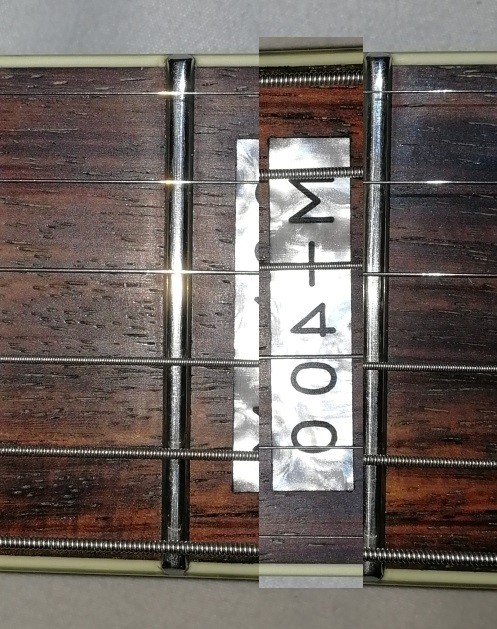 More strange things. There is an unconnected gnd wire from flr spring plate to nothing.. I think it's no need for emg81, but I wonder why the heck this wire is here? As if the guitar had previously had passive microphones,with connected ground wire to tremolo spring plate,and wire cut off later. Or maybe the ground wire has been pre-soldered to plates? 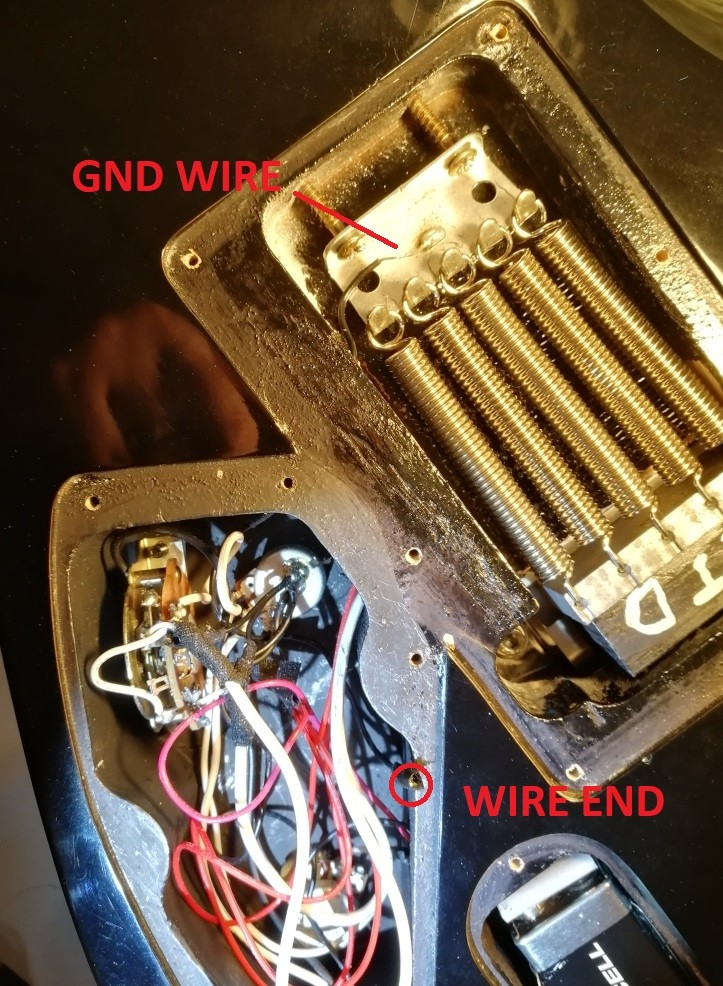 Hey Teletap! Yeah, I don't see anything that jumps out to me saying it isn't legit. ESP (and LTD) always put in a ground wire for the bridge, even on EMG models. I think it's a good thing because if you decide to go with passive pickups, you can just attach it and rock. You don't have to worry about drilling a hole through the guitar. There's nothing that would hurt EMG pickups by having them grounded to the bridge.

The string spacing could be fixed, but it would require moving the nut toward the high E string. That means you would have to remove the nut, fill the screw holes, reposition the nut and drill new screw holes for it. It's not a complicated fix, and if you have someone who you trust to work on the guitar can be done well. But if you can play the guitar as-is, it may not be worth trying to fix.

Yes, I can play the guitar without any problems, the displacement of the strings ​​is practically insignificant. Maybe at some point I'll buy to a higher quality tremolo because
the guitar strings easily pop out, unless the screws are tightened very hard. This is very annoying.
Thank you so much for your effort, Pushead, I greatly appreciate your knowledge!

Doubts unfortunately still not leave me alone, what a rabbit hole! In short:I measured the values ​​of the pick-ups with a multimeter and it seems that the emg-81 microphones in the ltd do not have an internal protection diode against the wrong polarity. This suggests that they are not genuine. I have emg 81 and 85 I acquired earlier in 1999 to my Ibanez, which give the relevant values.

Before I start sending wiring diagrams and other pictures here,maybe is it better choice create a new thread for this pick-up case,named like "The Fake EMG Thread"?

So pick-ups propably get damaged, if the battery is accidentally connected wrong way.

Values are measured directly from the battery connector:

+9V -> Gnd : about MegaOhm (value is correct because diode is series with 2x178 kOhms resistors)

Gnd -> +9V: 0.6 V , looks like the diode short-circuits in this direction!! So battery is short-circuited if it is tried to connect a wrong way.

I think the internal structure of the (fake?) preamplifier IC causes that short-circuit. In older 81/85 mics the preamplifier is probably the LM4250, which is SERIES with protection diode.

It would be very interesting to see what values ​​others get measured. The measurement is very easy to do: the resistance and diode threshold are measured from the battery connector with a multimeter. The original or at least older models should not have that "short circuit" or crowbar diode.

Two (hopefully) clarifying pictures of what i mean:

I'd suggest taking the pickups out and directly testing the connectors on the pickup. Leave the wiring and potential losses from the potentiometers out of the circuit.

Hey! I have been tested them separately too, the power consumption matches exact the specs (80 uA / pickup), they looks exactly the same as the originals (gold-plated connectors, dimensions and shapes including casting).

I tested them also on the guitar by connecting a 100 ohm current limiting resistor in series with the -9V batt (reversed voltage), the measured current was 74 mA (37 mA/pickup) and voltage over pickups was 1.5V.

unfortunately I remember after this procedure that that usually the preamplifier contains esd protection diodes which can cause the measurement result. Their maximum allowable current is in the range of 1-10 mA, and I began to suspect that the preamplifier may have been damaged due to excessive measurement current.I next made a series of measurements for both pickups separately, now at a lower current (0.4 - 1 mA), and the values ​​of both pickups were exactly the same, which would indicate that everything is fine.But when I compared ibanez and ltd (both type 81), ltd sounds quieter and maybe less volume than before. Ibanez sounds louder and clearly more dynamic, even though it has dirty and worn strings.

I asked the emg service and they answered:
"...There have been slight changes to the PCB layout and components over the years,...but nothing that would affect the tone or output...".

I believe the pickups are genuine and the protection mechanism has been changed, which is now reflected in the measurements. it is hard to believe that the serial diode in older pickups would have been replaced now by a short circuit alone, which would makes the pickups very prone to fault against reverse polarity.

I will continue to investigate. I have still been able to resist the temptation to do an autopsy for the pickup.

Based on the above information, it can be concluded that:
1)Either the EMG has made changes to the internal protection as shown in the measurements, or 2)The pickups are fakes, and the counterfeiter has not understood the internal esd protection of the operational amplifier, which causes a short circuit when power is connected in the wrong direction. This would be confirmed by simply opening the device, but it destroys the pickup.

I found one video,where a youtuber broke up a chinese copy and it really doesn't seem to have a protection diode at all. But this copy also differs externally from the original EMG (location of the connector, no gold-plated connectors, and no dent in one corner of the epoxy casting (which caused by the hole in the corner of the circuit board) which can be seen in the originals. But, maybe chinese counterfeiters are evolved, and now it is impossible to distinguish genuine from counterfeiting other than by electronic measurements?

Hi guys, I've been offered this guitar as a vintage 1986 ESP, what do you think about it? Thanks

It's hard to confirm that it's an actual ESP. I'd play it, if possible, to get a feel of if it's a quality guitar and worth what the asking price is.

Thanks, it was sold as a vintage 1986 ESP but resulted being another scam - the seller got too nervous and talking nonsenses when I tried to find out about the guitar's history, procedence, exact model, etc.

I measured the outputs with an oscilloscope and the signal strengths were of the same order of magnitude on both guitars. So apparently the mics are okay. For frequency response measurements I thought at some point to build a coil and a constant current amplifier as long as there is extra time

New here, looking to buy an ESP and found this offer, is it OK, what would be a correct price for it? 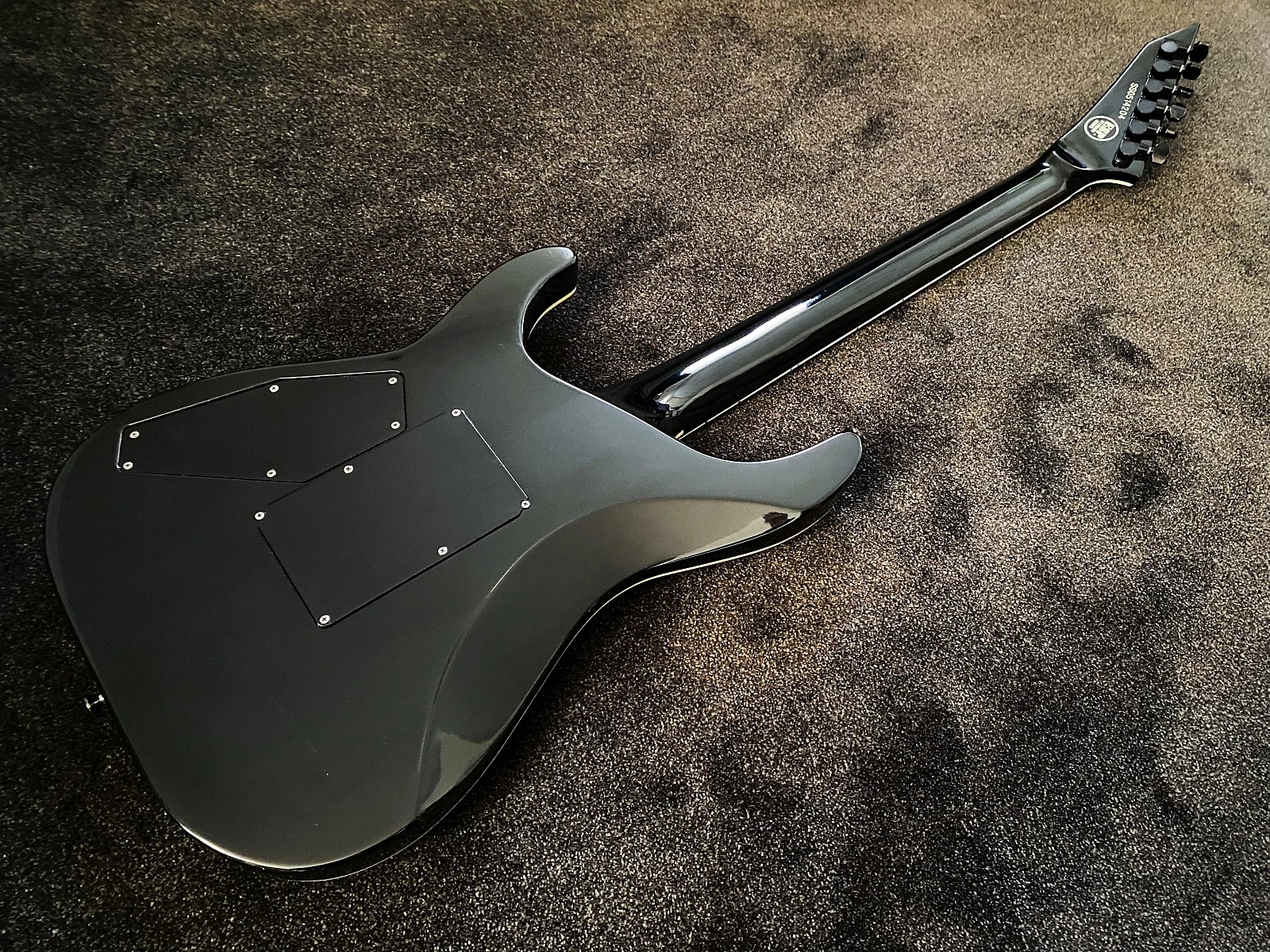 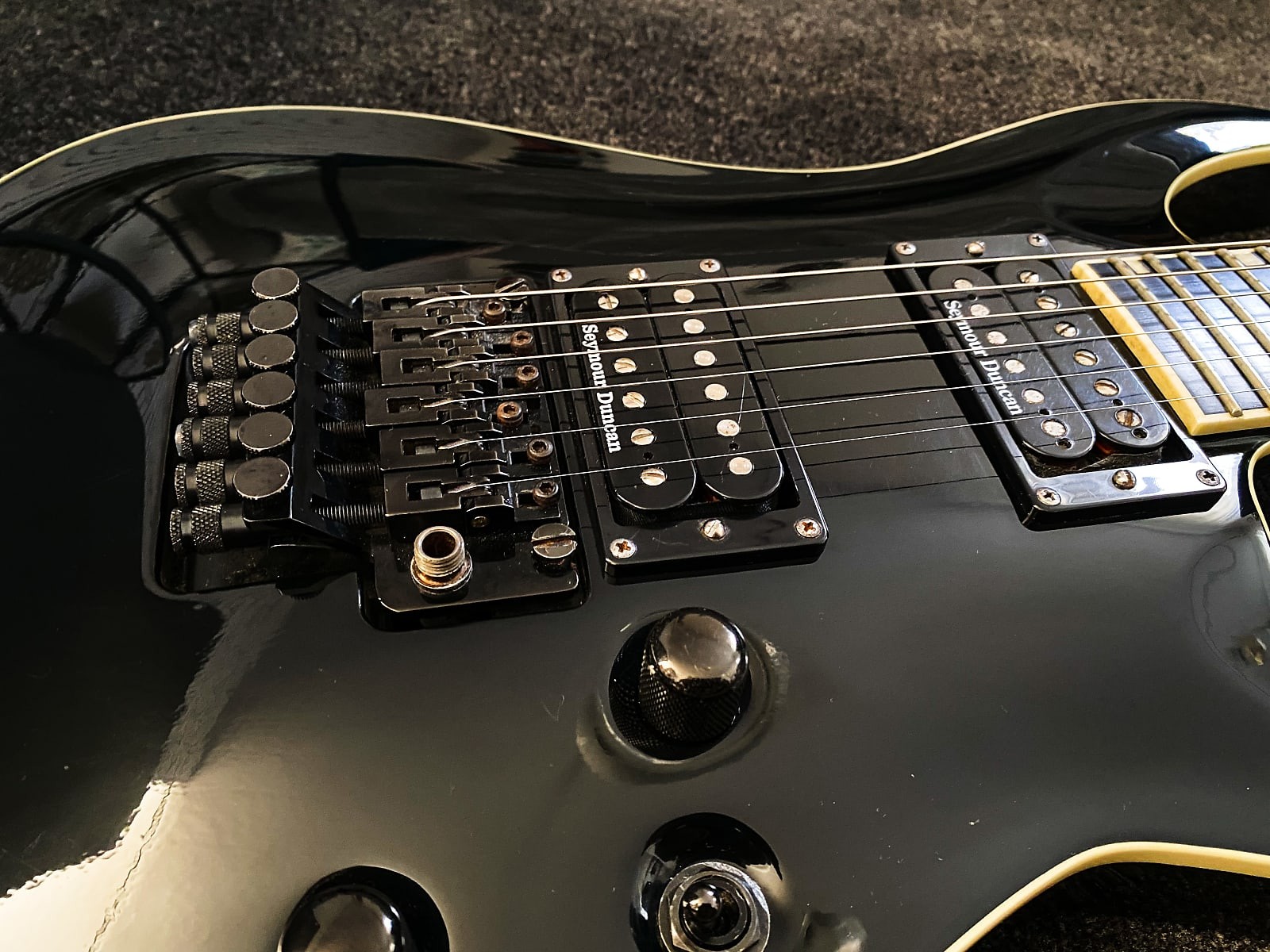 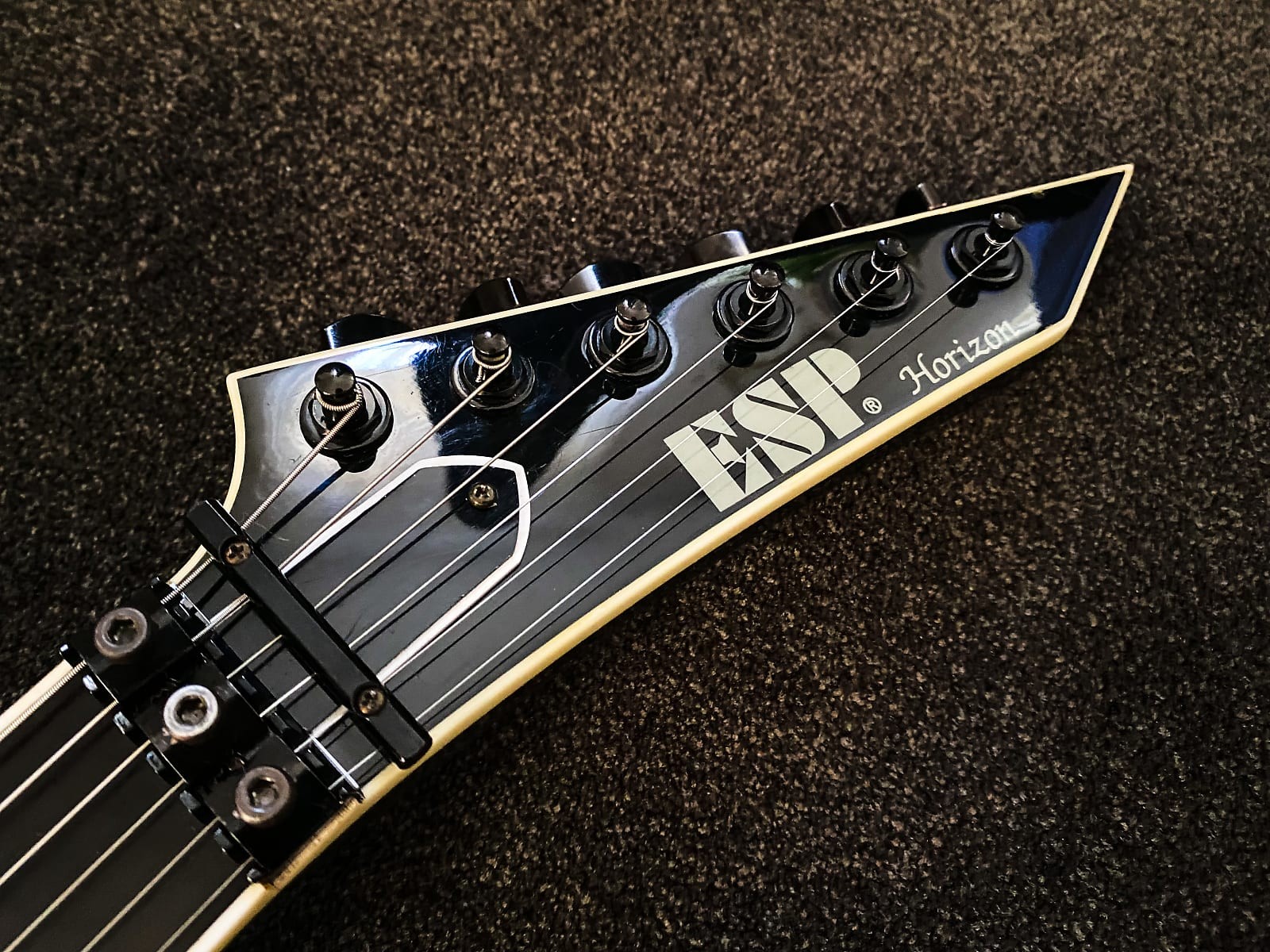 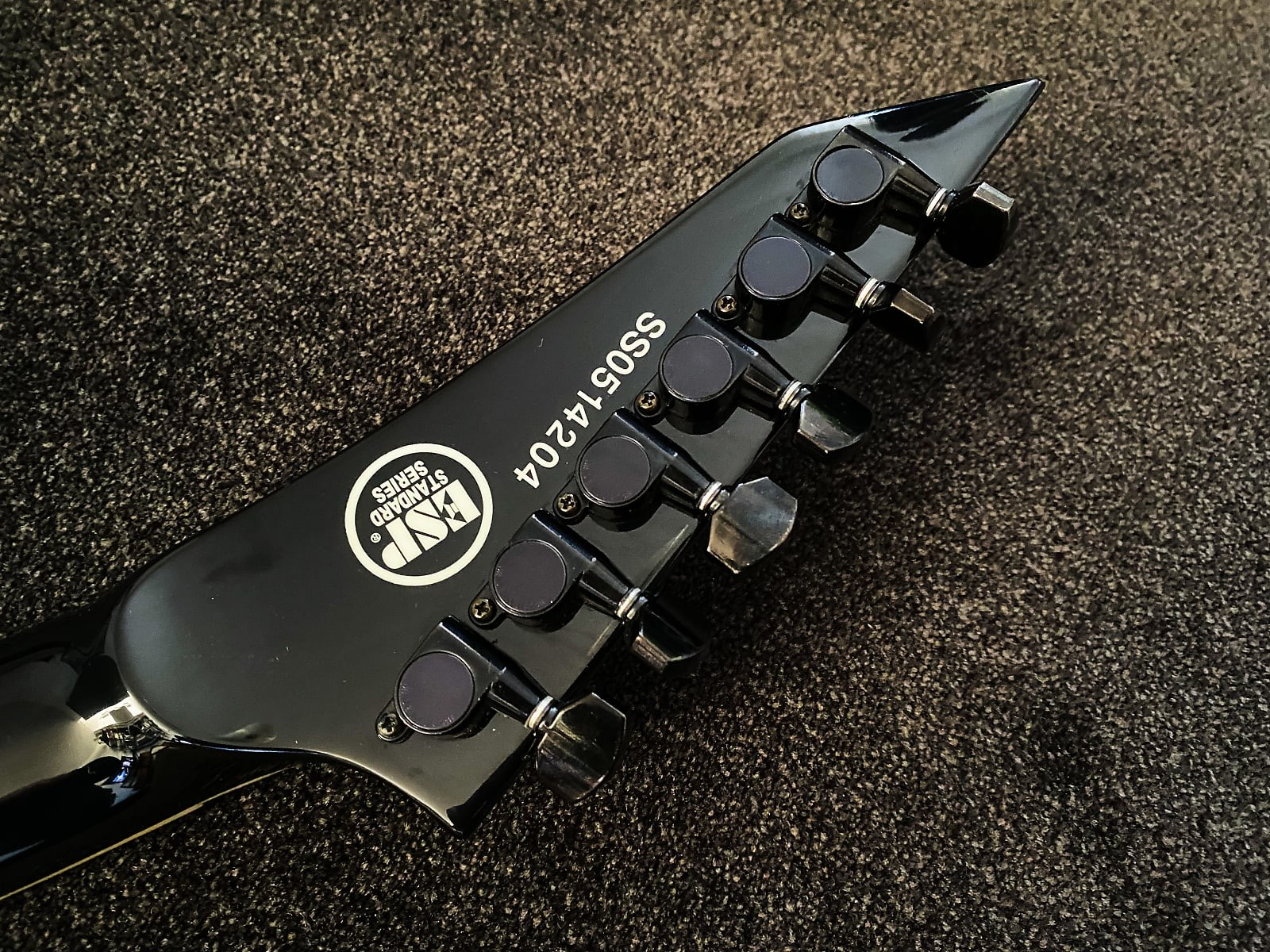 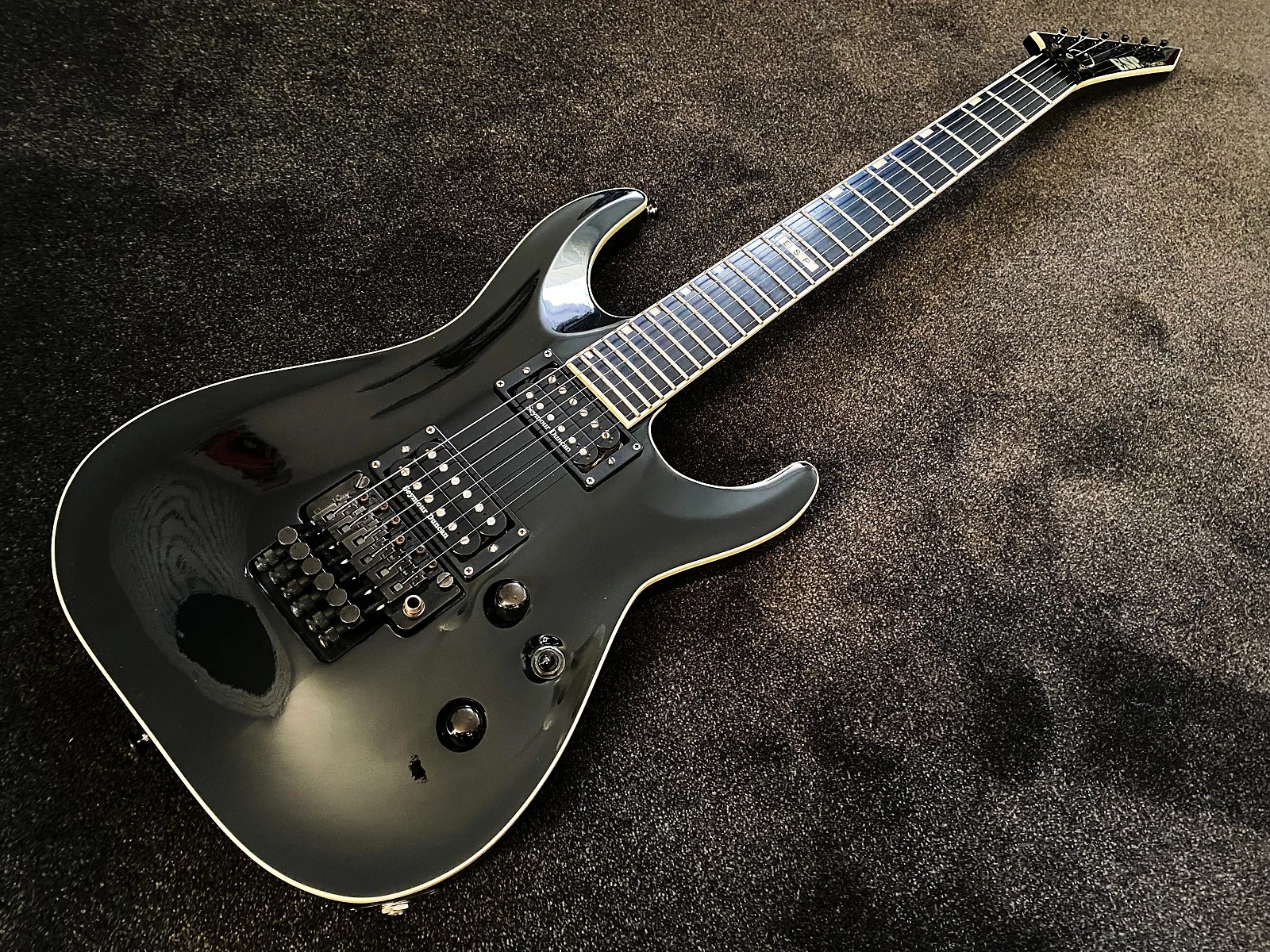