too bad, hopefully this does not get out of control with the possibility of some specific metallica collectables value to somehow collapse.. (one way or another)

I doubt they'll ever collapse. No one (I am generalizing here of course) seems to like the Snakebyte and Vultures. They are way too weird looking compared to what we are all used to for years. Explorers, Eclipses, etc. The White Iron Cross actually looks sweet and from what I heard plays/sounds amazing. I want one for sure.

I doubt they'll ever collapse. No one (I am generalizing here of course) seems to like the Snakebyte and Vultures. They are way too weird looking compared to what we are all used to for years. Explorers, Eclipses, etc. The White Iron Cross actually looks sweet and from what I heard plays/sounds amazing. I want one for sure.

I agree... the golden era of Metallica guitars are the explores, like jh-2, elk skull, jh-1 but with the green flames, also some eclipse and some Kirk guitars too like the Zorlac or even the ouija, also the awesome kh-1...that would be a great reissue!!

too bad gibson is a bitch and think they hold all the shapes in the world.... they’ll probably sue aristides too because of the use of two humbuckers....

also I traced my MX-2 and Gibson explorers and the shape is so different on so many points....

I hear ya man.

I heard back around the St. Anger/Death Magnetic era James was real close to switching to Gibson about the time he was using the Rusty Explorer and Gibson Iron Cross. There was that one video from them recording Death Magnetic and you clearly see James using a Gibson LP custom with the stripe, Iron Cros..s but had no distressing. It was all brand new and even had hang tags.

I googled a bunch and no one knows what really happened. I heard from someone here James is extremely controlling and either Gibson dropped the ball or James did because of his demands. I heard also a rumor that Gibson did not think their products would bode well with the metal audience in terms of price and looks etc.

Let's be frank....the cheapest Gibsons are still pretty expensive and I doubt most would want and Epiphone Hetfield sig. People will buy LTD James/Kirk sigs all day as they are good and have great price points and sometimes James/Kirk have played LTD's live.

But a Gibby LP Custom Iron Cross would be super expensive I bet for a limited run or even for mass production. Then they could make Gibson Hetfield Explorers if they wanted, but I think that would back fire IMO

Just some food for thought.

but actually it’s easy... there’s a video on YouTube with Bill from mastodon and why he dropped Gibson for ESP...and the things he said were on point.

gibson is going down slowly... their marketing is shitty.... is not that hard, just make the guitars people want and with good price/quality.
even now that they reissued the explorer they made a mess with the V.... is not that hard to reissue the 70s V or even the original one with the v tailpiece....c’mon is not rocket science, just give people what they want...

And seriously.... Gibson can’t keep up with a band like Metallica.... they just don’t have it, imagewise, attitude... nothing....ESP makes sense. And maybe James went Gibson because ESP couldn’t make the Explorers anymore. Gibson were just fuckheads... they even sue ESP again for the Eclispe I.... you can see forma mile away it’s a different guitar.... just stop trying to make everyone else stop making guitars to try to come up from bankrupcy.... it’s not going to work even all brands stop making les Paul type guitars...

just out of curiosity.

what is the current price ranges of the jh1,jh2,jh3,grynch,iron cross black version?

Manuel B. yeah I hear ya dude. I LOVE my Gibson Les Paul Aged Custom shop, but I probably would not mess with the USA stuff or buy anything until I play it in person. Gibson really shot themselves in the foot with the "Play Authentic" video with that one douche bag (I forget his name. Real arrogant fuck) The removal of the ESP Eclipse 4 knobs and more pointy horn because of Gibson was silly on Gibson's part.

I did hear also from someone on here that James was super pissed ESP USA would not make Explorers for him, but again...rumor. I am wondering if that is why he dropped ESP Explorers all together and went with the Snakebyte (not my cup of Tea at all) I am obviously a huge fanboy but he makes out like EVERYTHING he makes is "historic!" and "never done before!" Mean the het set, Snakebyte, Vulture. (all products I am not into actually lol)

I don't ever want to meet him in person lol as if he turns out to be all the things I have heard behind the scenes, he seems to have a huge ego. Kirk and the others I heard the opposite. Super friendly to meet. Some guy at SiriusXM employee went up to James as he was walking and was just asking him to sign something and James kept walking next to him in silence like he did not exist. Like not even a "sorry, can't right now". Supposedly he was a real dick and it made everyone around the two people super awkward how James was walking the hallway with this guy next time totally ignoring him as he was trying talk to him.

Back to Gibson...I think their custom shop stuff is top top notch for sure and heard really good things about anything made in 2019. I think they got new management and this one channel I watch (Troglys guitar show. Great channel) mentioned numerous times that 2019 was an amazing year to buy Gibson's. 2020 seems like Gibby really went hard to make Epiphone a real brand so I have no idea on the 2020's. No idea on their 2020 Gibby models but I heard the Slash ones were OK.

My 2019 LP custom shop aged sounds and plays insane, but of course it's from 2019 (thank God). Played acoustically is incredible. So much bright chime to it and easy to play. 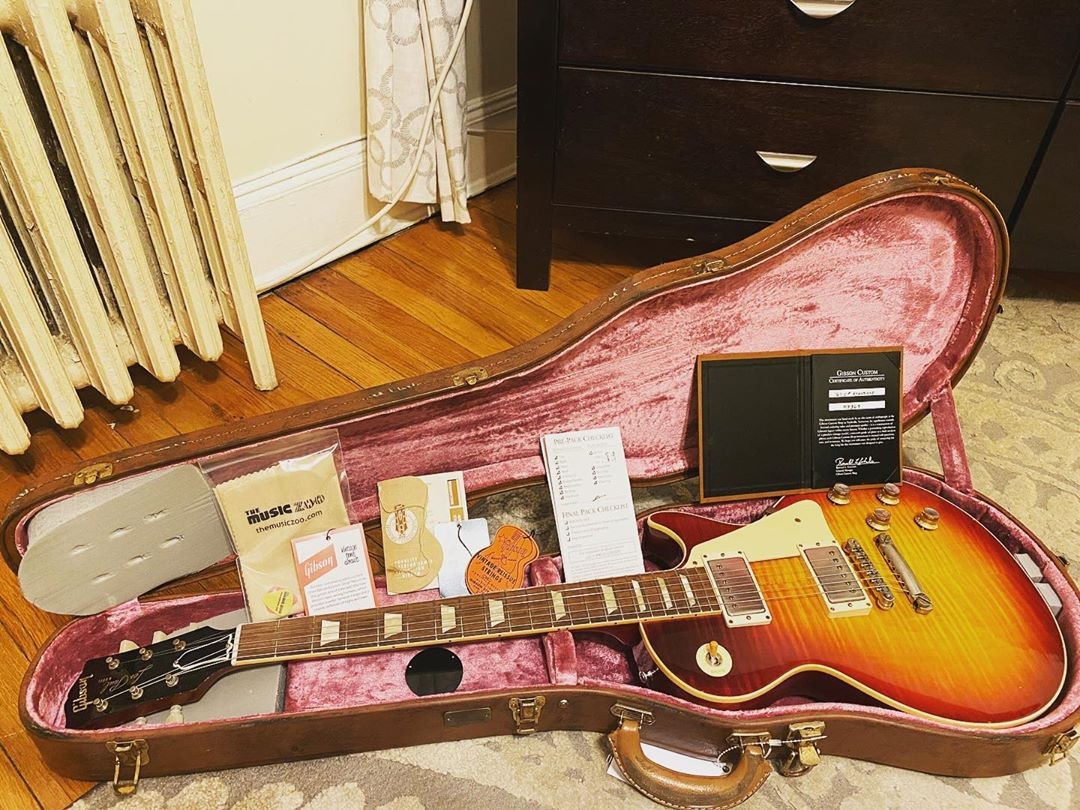 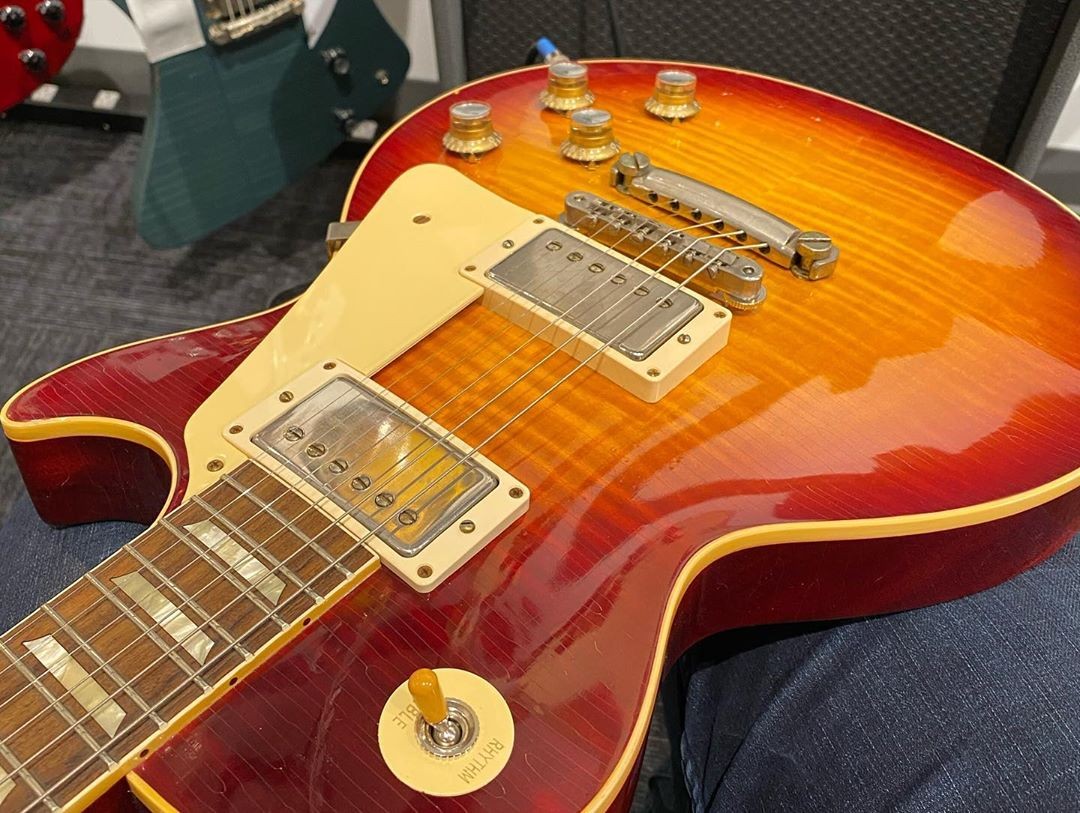 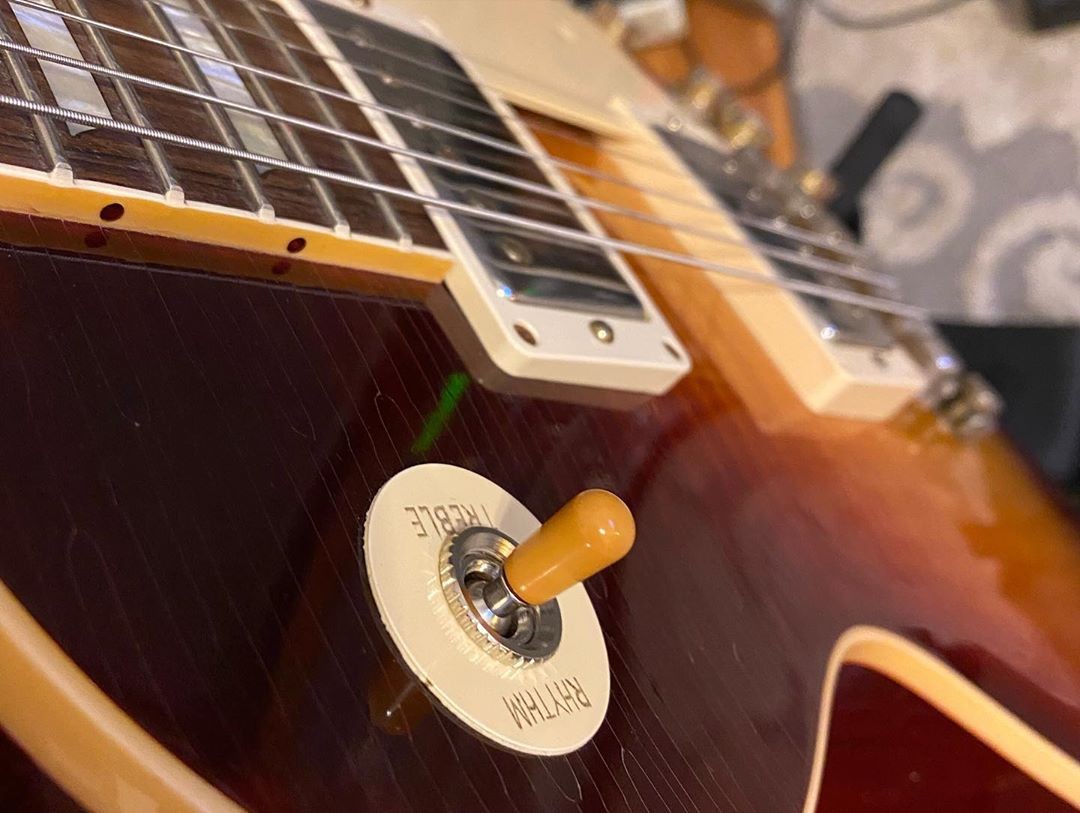 BUT I did play an ESP USA Eclipse and wow those things were thick. Full thickness and sick tops. Felt a little too big though for my taste (or at  least the one I played) The pickups in the USA Eclipse I played sucked balls so I hated the tone, but I imagine with EMG's (my preference) it would sound amazing. The new ones I think have stainless steel frets. I know the Viper does. 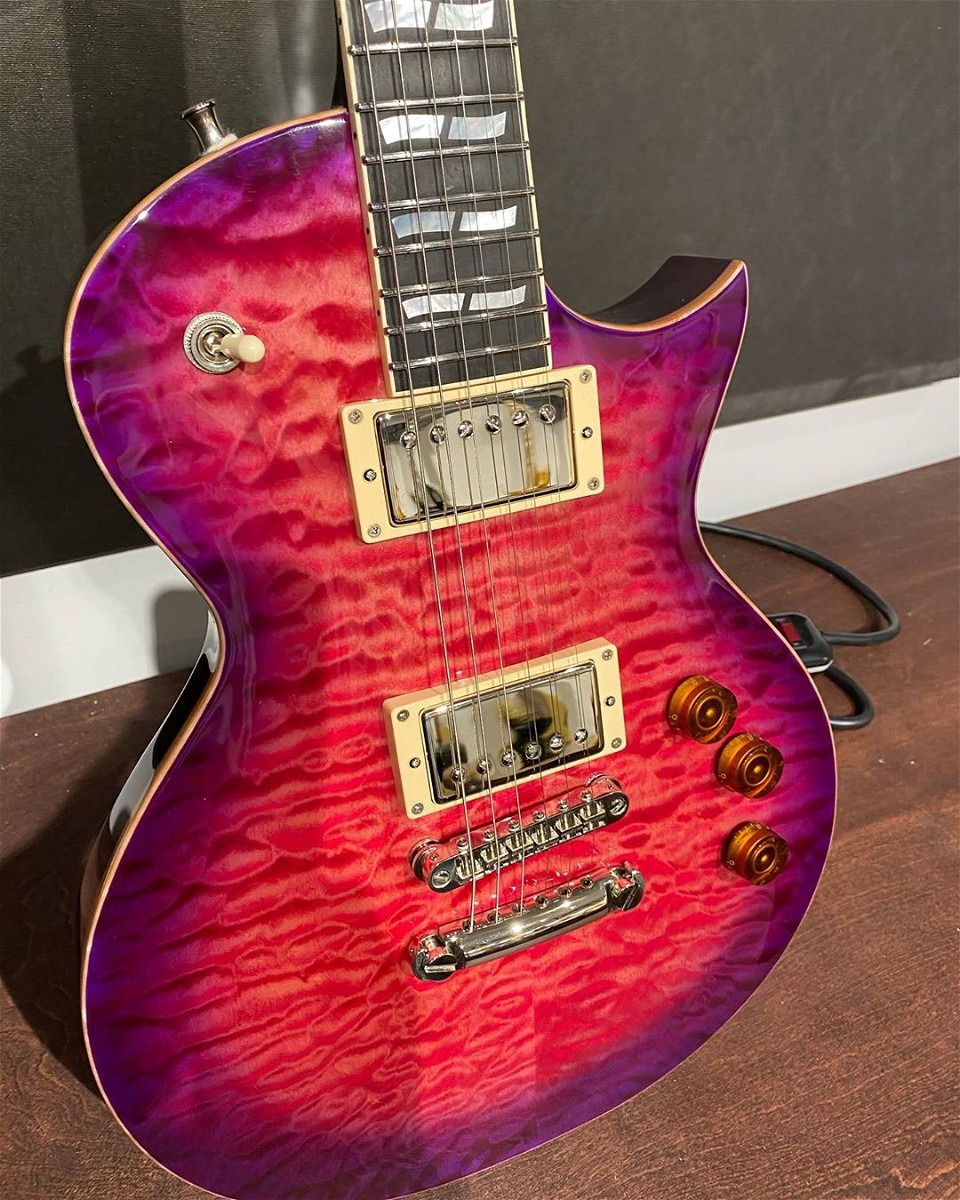 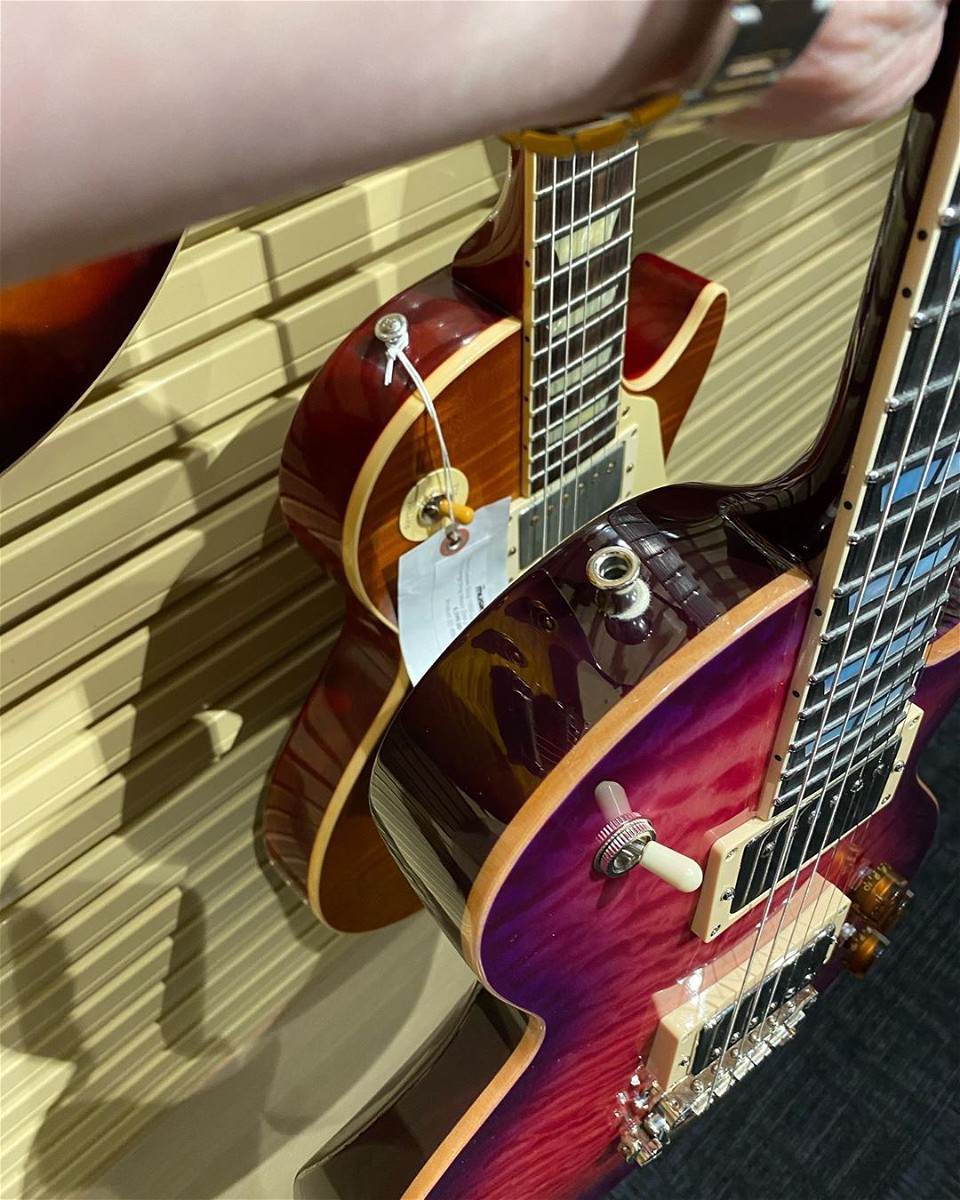 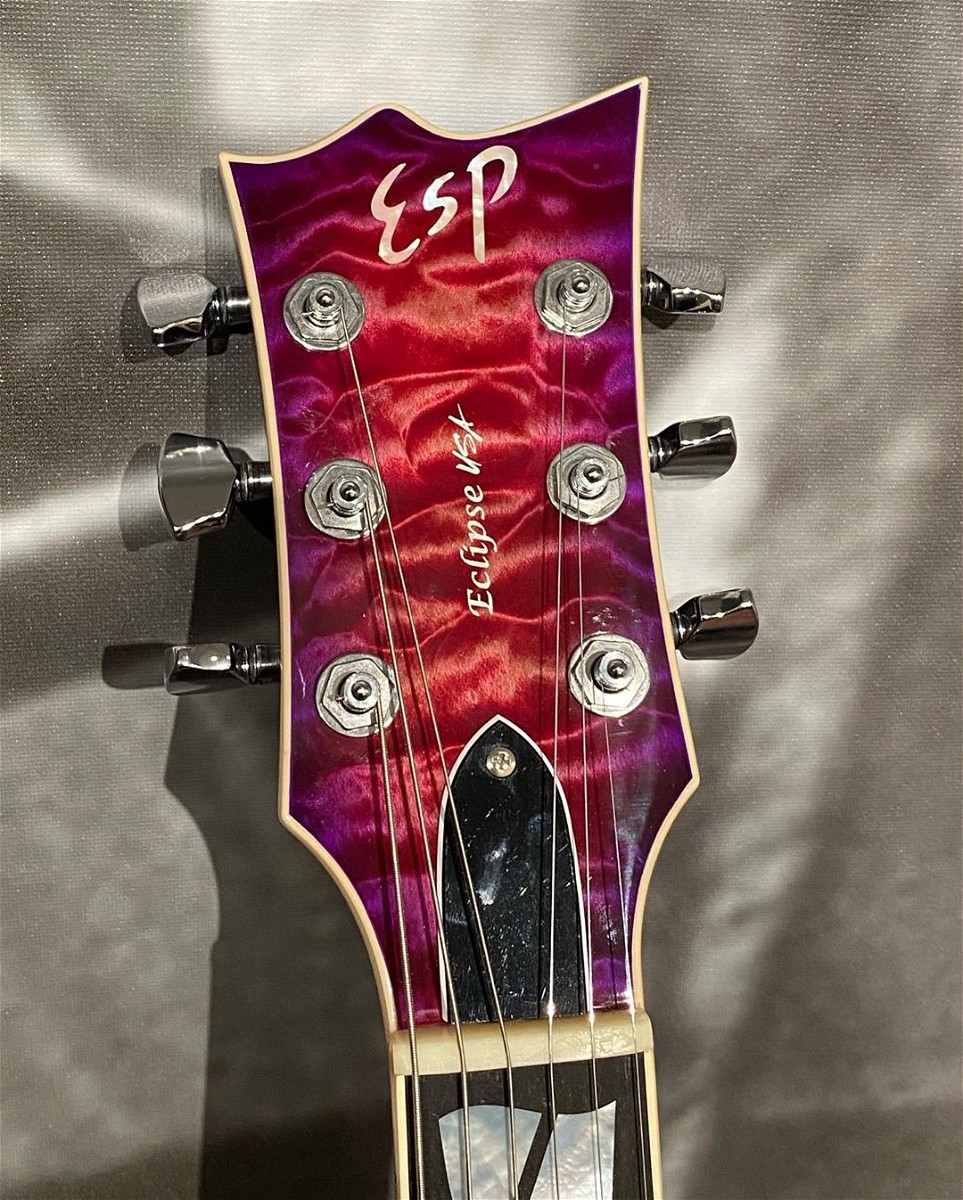 I’d love myself a les Paul custom but after they play authentic thing I am in no mood of getting a Gibson! For a guitar lover who rarely cares about the business part this bugs me... it’s like dumping a steaming pile of shit on the mouth of the guitarists.

Every year I was waiting for Gibson to have some cool guitars that actually look good and we’re good, but never happened. Would also love a ‘58 style Flying V but only on the god damned custom shop.... to pay top dollar for a custom shop, I’d o oh go ESP, for they do what I want... and I value much more the Japanese craftsmanship than american.

the only American brand that didn’t disappoint me yet was PRS.

Love the Gibson LP you have there Sean.

Off topic.... but are my eyes playing tricks on me or is Hetfield's Iron Cross thicker than the ones sold to the public? I am looking at my black one now and it looks thinner lol Cue Pushead 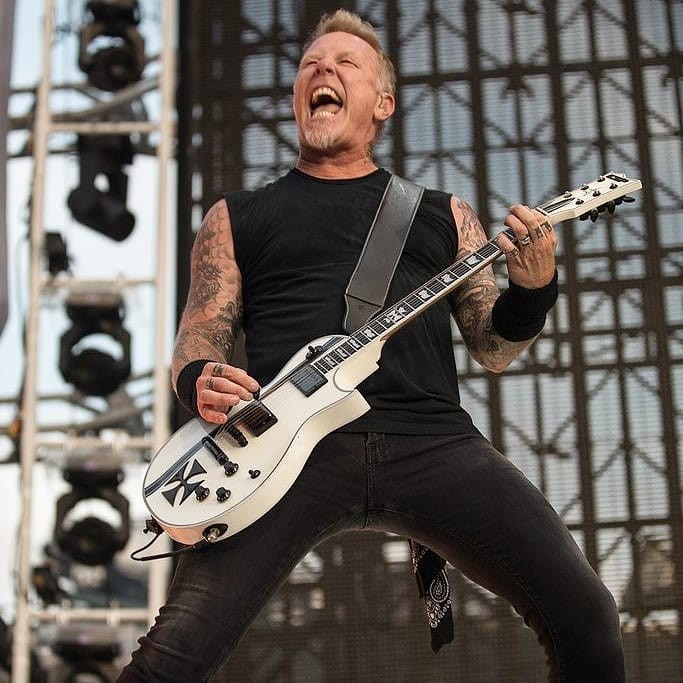 I have both, I'm going to watch this but the white iron cross is heavier than the black iron cross

as for James, I had the chance to meet him and speak with him in 2009 and he is a super very nice and attentive guy

I checked and the two are the same size, I think in the photo it is an optical effect, just look at the location of the cable socket

I have NO idea man, but it wouldn't surprise me if they are thicker than the ones made available to purchase.

I am sure if James contacted ESP and told them "I want the body of my IC 10mm thicker than the last one you gave me", ESP would be happy to accommodate the man.

haha yeah totally. They jump over backwards for him. All those ugly Giants Snakebytes they have made over and over and over must have been time consuming.

Lol, yeah. No wonder it's a 3+ year wait at the Custom Shop these days for an airbrushed ESP guitar.

Lol, yeah. No wonder it's a 3+ year wait at the Custom Shop these days for an airbrushed ESP guitar.

Lol, yeah it's all good.

I'd rather them take their time and do an amazing job like they normally do on a Custom Shop ESP.

Rather than rush these orders out the door potentially fucking them up.

I am happy to wait longer than I have to, to get the perfect Custom Shop guitar.

ESP 348 what are you getting built dude?

Oh, nothing really. Just talking about the guitars currently in the Custom Shop.

If I had a guitar in there, I'd rather the guys take their time and make the guitar perfect, as opposed to rushing these guitars out the door with the potential to mess them up.

Not so much the craftsman fault, but pressure from above onto the workers to get these guitars out the door to keep customers happy because they are so far behind because of this virus crap.

I would be happy to wait a little longer to get my guitar, it's not a problem.

I know some customers are very impatient but lol.