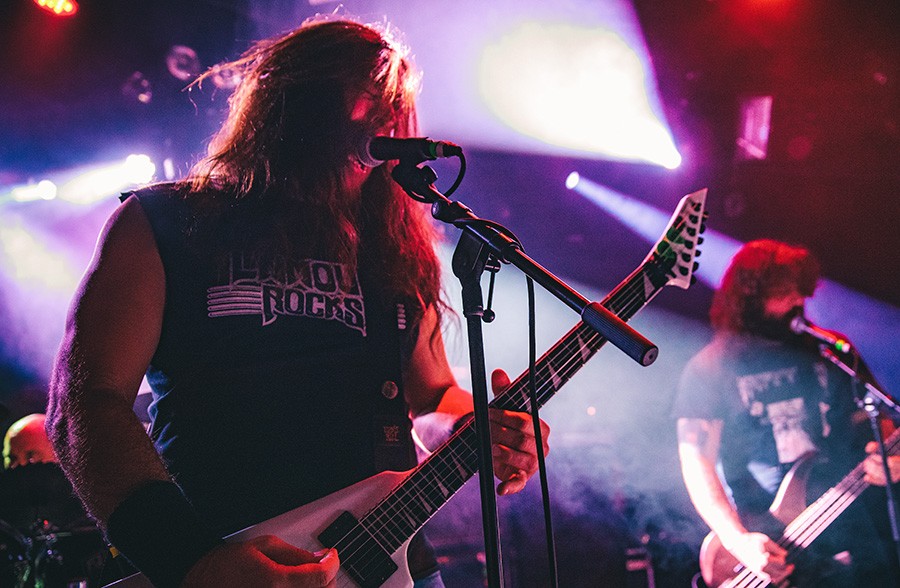 As the founder and consistent member of death metal/grindcore band Exhumed that formed in 1990, Matt Harvey has been an influential central figure in the genre. While much of his musical output focuses on extremely gory themes, Matt is a good guy who has a true passion for his art.

We’ve talked to a lot of artists and bands over the past few months who are dealing with releasing new music and not being able to get out and represent that music for live audiences due to the pandemic. How are you dealing with that in your bands?
Well you know, it’s one of those cases where it’s a bit humbling. You make all these plans and you’re gonna do all this shit, and all of a sudden you realize that there’s bigger shit to worry about than rock and roll. Two of my bands were supposed to be starting a tour on June 6 - Exhumed and Gruesome - and we have a split 10” EP coming out June 5. We were speaking with Relapse, our label, and they were asking, “Do you wanna shelve it, what do you want to do?” The way things are with everything going on, I don’t know if we could even do this tour together in the future, so we decided to put out the record now. With the pandemic and the quarantine, there are a lot of people who are sitting around right now, and they’re bored and uncertain, so we felt it was a good time to get it out there.

Do you remember the first time you heard about ESP Guitars?
I think the first time was when when James from Metallica started playing them in the “Justice” tour cycle. The Kirk model from that era is really nice too, but it’s not quite as distinctive looking. James’ guitar was big, white, and loud, with those middle finger fret inlays - it was something that would definitely catch the attention of 13-year-olds like me at the time.

What ESP models are you playing right now?
My main guitar in recent times has been my black E-II Arrow, which is in D and I use it in Gruesome and Pounder. It’s a great guitar, but during quarantine, I’ve been playing more sitting down, so I’ve been spending a lot of time with my LTD Deluxe Eclipse with a Floyd. It’s a shockingly great guitar. I’ve been played V’s for like ten straight years, so when I got it, I knew I didn’t just want to get another V. I was going to South America on tour, and I didn’t want to deal with gigantic V case. But now it’s become my most played guitar. 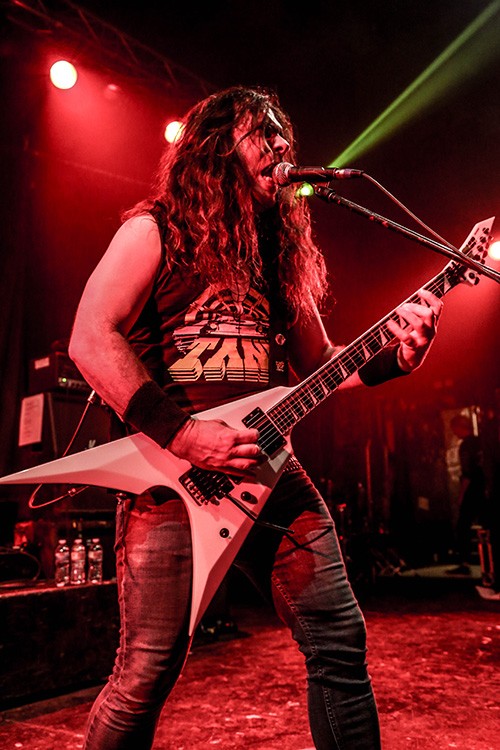 What makes your ESP models right for you and for the music of Exhumed and Gruesome?
You know, a big part of it is that it looks cool, but it’s also really comfortable. With ESP, one of the biggest differences I find is that all of the little details are just better. They stay in tune better. The hardware is higher quality. The bridges don’t rust out. I’ve had less problems with ESPs than anything else I’ve ever played. I do a lot of tremolo bar stuff and the Floyd always works right. I’m a simple guy. I just need the guitar to work. Doing 120, 150 shows a year, after spending hours and hours getting to a show, you don’t want to spend another two hours fixing your guitar. Playing ESP day in and day out makes a big difference. ESP makes my life a little easier.

The three big criteria when choosing a guitar comes down to looks, tone, and feel. What’s the top priority among those three qualities for you?
Well, I would say feel and looks would be a close number one and two. Especially for playing extreme metal, when you look at the band, you get a representation of what they’re about. When you see long hair, dirty jeans, and pointy guitars, you have a basic idea of what to expect. With tone, we’re playing high gain stuff, and there’s not a lot of dynamics, so the physical tone of the guitar and the wood itself takes a backseat to the electronics. 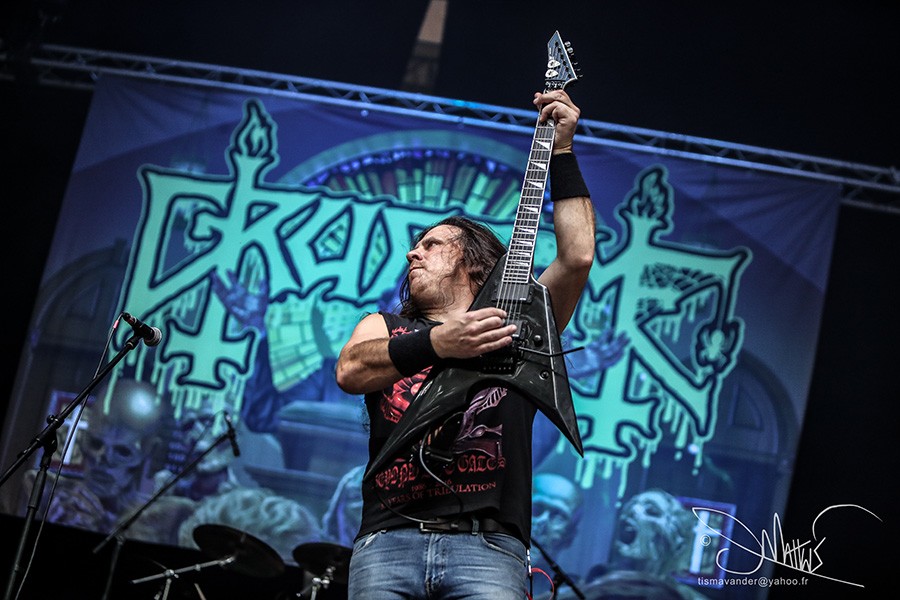 Are you using the stock pickups that came with with your ESPs?
I’m a Duncan guy, so I’m using the original Blackouts. I find them to be super responsive, really loud, and really clear. For the guitars in D, I’m using the Mick Thompson set, which, even though they’re not supposed to be, to my ears sound more scooped, and the lower I tune, the less scooped I need it. So for guitars in D and close to standard tuning, I like that that smile EQ. For my guitars in B, I use the original set - like I said, keepin' it simple.

How old were you when you started playing?
I must have been about 12. It was deep in that “impressed by Hetfield” phase of my life. Actually, I still am at age 44.

What made you want to play guitar at the time?
When I was getting into rock and metal in the late ‘80s, it was dominated by hair metal bands. Don’t get me wrong; I liked a lot of those records as a kid, and I still do. But I didn’t look at those bands and see myself in them. I was like a lot of kids going into their teen years. My folks got divorced. I was going to a new school where I didn’t know anybody. I was getting pimples and pubic hair and was filled with angst. But then I discovered records like Master of Puppets and Reign in Blood, and thought, “This is what I’ve been feeling inside. This is what I wanted to express and didn’t know how.” Plus, the guys looked more like something I could be. When I looked at C.C. DeVille or Richie Sambora, I didn’t really see myself. Things just got heavier and more intense from there. I got swept up and I wanted to be a part of it. And now here we are, 30 years later. 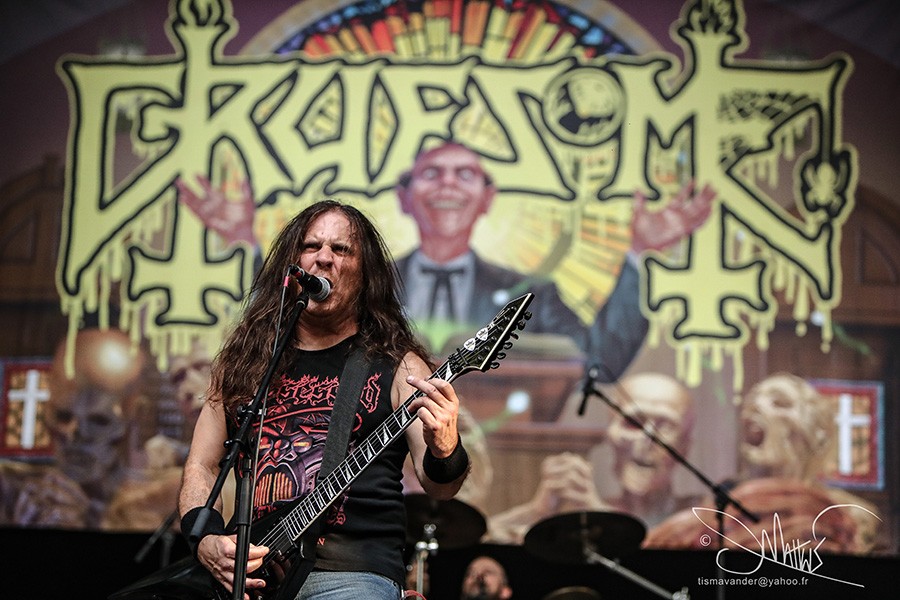 Imagine I was an alien visiting Earth from another planet, and I land my UFO in front of you and get out and ask, “Who are the most essential bands of death metal? I only have 30 seconds to spend on your planet so answer quickly,” how do you respond?
I would say Possessed, Repulsion, Death, and Napalm Death. Those are my guys.

Those are excellent examples to take back to the Cosmos. Last question… tell me the name of an artist or band whose music you enjoy that would be a surprise to other death metal and thrash metal fans.
I mean, there are probably tons of them. I listen to all kinds of different music. One would be M83, an electronic music band from France. I like Hammock. They’re kind of ambient relaxing music. Tame Impala is cool too. When you’re playing heavier music day in day out, your ears needs a rest in between. The funny thing is that during the quarantine, I’ve actually been listening to more heavy music again.

I statements allow you to express yourself clearly and directly and take responsibility for your own thoughts and feelings while avoiding blame and accusations toward others.

Don’t let your partner control you and don’t set out to control your partner. Setting boundaries means respecting each other and finding compromises to make the relationship work well.

For example, you may want to create sexual  boundaries (being sexually exclusive) and social boundaries (having one night a week designated for friends or activities).