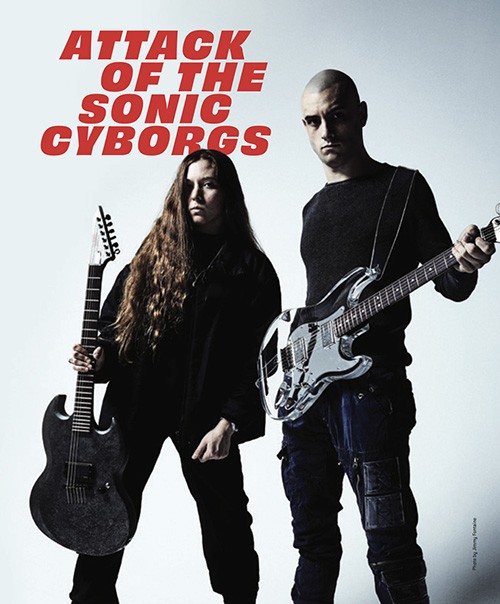 ESP signature artist Reba Meyers, along with her Code Orange bandmate Dominic Landolina, was profiled in the latest Premier Guitar magazine. The band is stoked about the recent release of their new album Underneath, and Reba had plenty of quotable moments about her LTD Signature Series RM-600.

PG: Reba, you have a signature model with ESP. Tell us about the process of designing the RM-600 with them.

Meyers: I’ve played an ESP LTD Viper since I was 14 years old, and I fell in love with it. I hadn’t seen anybody else play that model at the time—probably because I was living in a very small bubble in Pittsburgh—but I felt very connected to that guitar and stuck with it forever even though everybody made fun of me for never getting a new guitar. Eventually I met Tony [Rauser] from ESP in California and he asked how I felt about doing a signature guitar. Of course, I was hyped as hell! I started playing around on an iPad and took a reverse headstock ESP guitar and virtually glued it to a Viper body and threw a weird finish on it, sent that mock-up to ESP as a basic version, and, to my surprise, Tony was really hyped on it! I didn’t expect them to let me change the headstock on a model that they’d been doing a certain way for so long, but the team approved it and they figured out a process to do the finish with Saran Wrap. We collaborated on the actual specs of the guitar, mocked it up as a one-pickup design, and found a good killswitch to put in. They sent me a prototype and my only complaint was that it was too light, so they made me a heavier one and that was it. ESP was super cool about it the whole time and willing to do everything that I wanted to, so I’m very happy about the whole situation.