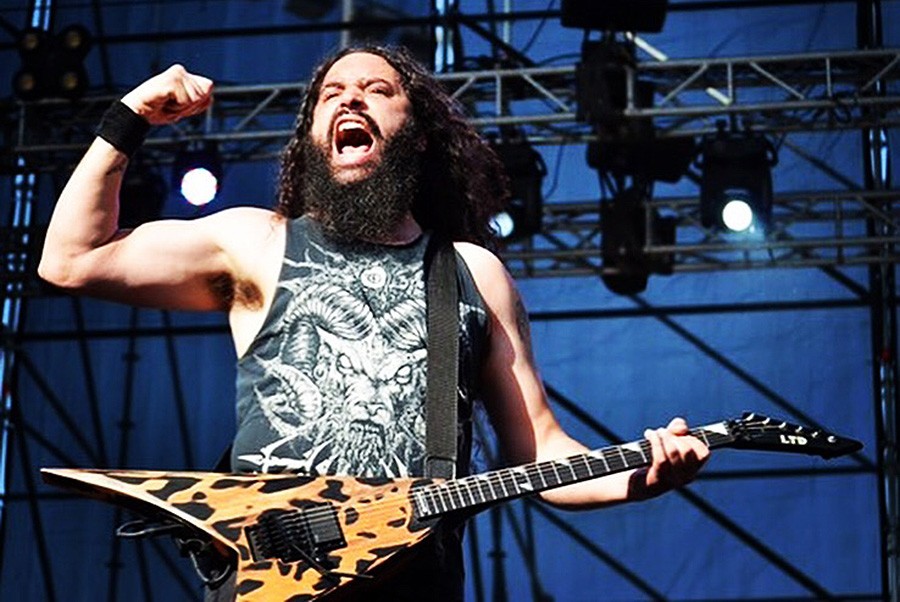 It’s always an exciting time when your band has a brand new album ready to drop, but in 2020, things have been a lot more subdued for many musicians. Not so with David Sanchez, frontman of Havok whose new album 'V' was released on Friday May 1. He seemed upbeat and stoked for people to hear Havok’s latest creation.

How have things been going for you during the quarantine period, and how is it affecting you as a musician?
Well, we’ve had a lot of tours get cancelled, but I’ve been staying very busy. Right now I’m working on other bands' mixes in my studio, making new music videos, and doing plenty of press for the new record.

We definitely want to talk about the new album, but first let’s go back in time a ways. Do you remember when you first heard about ESP?
Hmmm. Had to be watching Metallica on the Live Shit: Binge & Purge DVD.

We’ve heard that same answer from many guitar players, unsurprisingly. Tell us about the ESPs that you’re playing now.
I actually recorded the new record on my EX. It’s an ESP Standard EX, made in Japan. That was my main axe for the record. My LTD DV8-R SE also made appearances a couple of times on the new record. I still often play my old LTD Shadow models live.

What made the EX right for the new Havok album?
We did a shoot out with five different guitars, and that was the best sounding one by far. It has a richness and depth that none of the other guitars had. None of the instruments we had to choose from were bad, but this one had “the magic”. 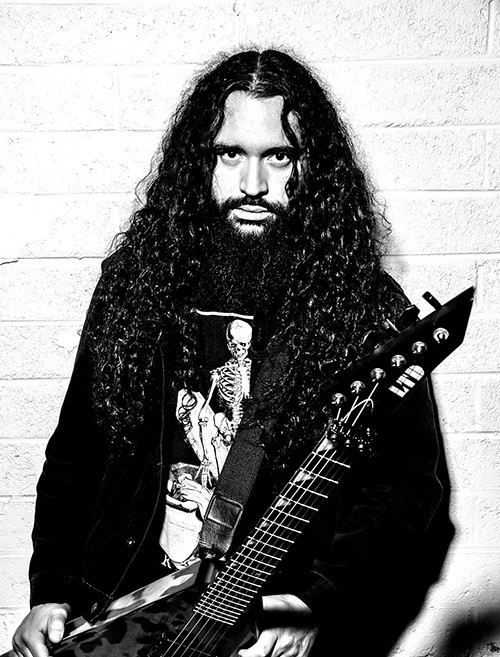 How does the EX stand out compared to other guitars?
I love the way that it rests when you play it standing up. I love the balance of it. I like the fact that it has a shorter scale and has only 22 frets. You and I talked about that at NAMM-

Yeah, that we’re members of the 22-fret club. Remind people why you prefer 22-fret versus 24-fret guitars.
On 24-fret guitars, the position of the neck pickup is closer to the bridge. That humbucker always interferes with my picking and the sound isn't as fat as it could be. With 22 frets, the pickups are further apart and the neck pickup always sounds cooler to me this way. The new ESP Custom Shop guitar I have coming this year has 22 frets and only one pickup, so there's plenty of room for aggressive picking.

The new Havok album V drops tomorrow (May 1). What can Havok fans expect when they press play?
Hmmm. A dynamic rollercoaster ride of riffs. Some really fast stuff... some really sludgy stuff. Overall I say it’s dynamic because the majority of time, the three stringed instruments are playing completely unique lines. It's rare that we all sync up to play in unison on this record.

What got you into thrash metal in the first place? Who were your original influences as a guitarist in the thrash arena?
James Hetfield was definitely a huge influence. He inspired me to pick up a guitar in the first place. From there, I got into all kinds of metal and later other genres of music. My musical taste diversified pretty quickly, and it's still expanding, but Metallica was the band that started it for me. They sparked my interest in music and that changed the whole direction of my life. 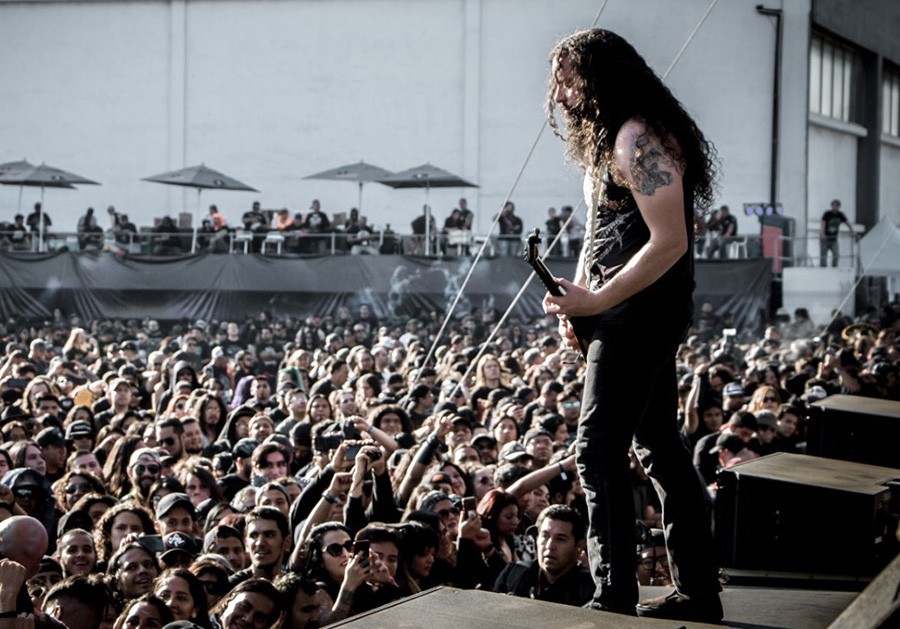 Back on guitars for a moment. When you’re considering a new guitar, what’s the top-level priority between tone, feel, and looks of the guitar?
Number one, it’s gotta look cool. The look of a guitar should inspire the player to be creative. Beyond that, it’s gotta feel right. It doesn't really matter how cool the guitar looks if you can't play it. And the third thing; it’s gotta sound good. I put sound last here, because you can change the tone quite a bit with different pickups, bridge materials, and so on. I guess you can always save the ugly, hard-to-play guitars for studio work, if they sound amazing.

Name some bands or artists that Havok fans might be surprised to find out you enjoy.
How about Al DiMeola?

Sure, Al DiMeola is amazing. A lot of shred guitarists appreciate what he does.
I don't love Al just for his shredding. I love his compositions. I listen to his music as a whole piece, and a lot of those songs are intricate and beautiful. The music itself is really interesting and inspiring on many levels. The musicianship is world-class, all around.

Who else?
Jean-Luc Ponty. He's an incredible violinist and composer that also played with DiMeola and Frank Zappa. Oingo Boingo is a huge songwriting influence for me. Danny Elfman is a genius songwriter and vocalist. I guess a lot of people might be surprised to know that Mr. Bungle is a big influence as well. We're not as off-the-wall as Mr. Bungle, but they definitely made a huge impact on my ideas of what music can be. 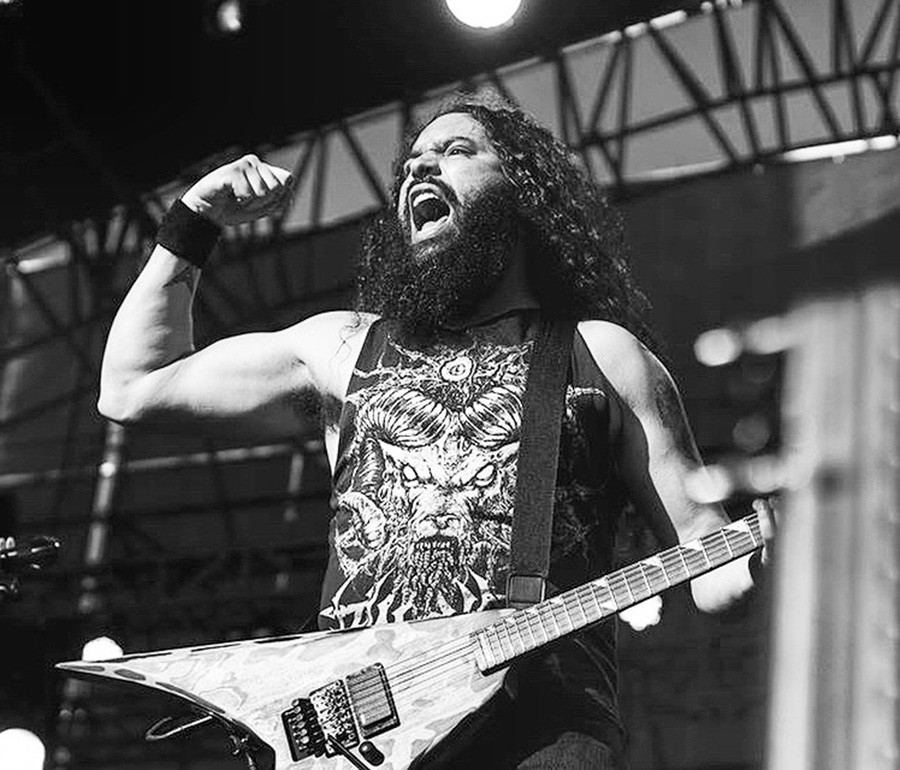 A lot of people in the ESP community might have some extra time on their hands right now. We were wondering if you had any quick tips to inspire them to create new music of their own?
I would recommend learning other people’s music. Sometimes when you learn other people’s music, you really start to pick it apart and you realize, “Oh shit, I had no idea that’s how they played that part.”

You can pick up entire new techniques just by emulating someone else’s style.
For sure! You learn a new trick, and add it to your tool box. It’s crazy; sometimes I learn someone else’s music and I'm surprised by how it's actually played, because it doesn't sound like that's how it should go, in my head. Sometimes you realize that certain parts are way easier than you thought they were, and other parts that sound easy, are actually way harder to pull off.

Last question. If you had to pick two tracks off V for people to check out that represent the album as a whole, which would they be?
The first two songs that come to mind are “Fear Campaign” and “Interface With The Infinite”. They're both rockin' and have some interesting guitar trickery on display.

We’ll listen to both when we get the album tomorrow.
Hell yeah! Thanks for taking the time to pick my brain. I love my ESP guitars and all of the people at the company. Cheers!

Great interview with an awesome musician. Love the part where they compared 4 guitars and the esp won! Esp for life!

I am very good friends with the guys in Havok. I have been taking lessons with Reece and Nick for a while now. So glad to see David featured on this.

Dave is a beast!