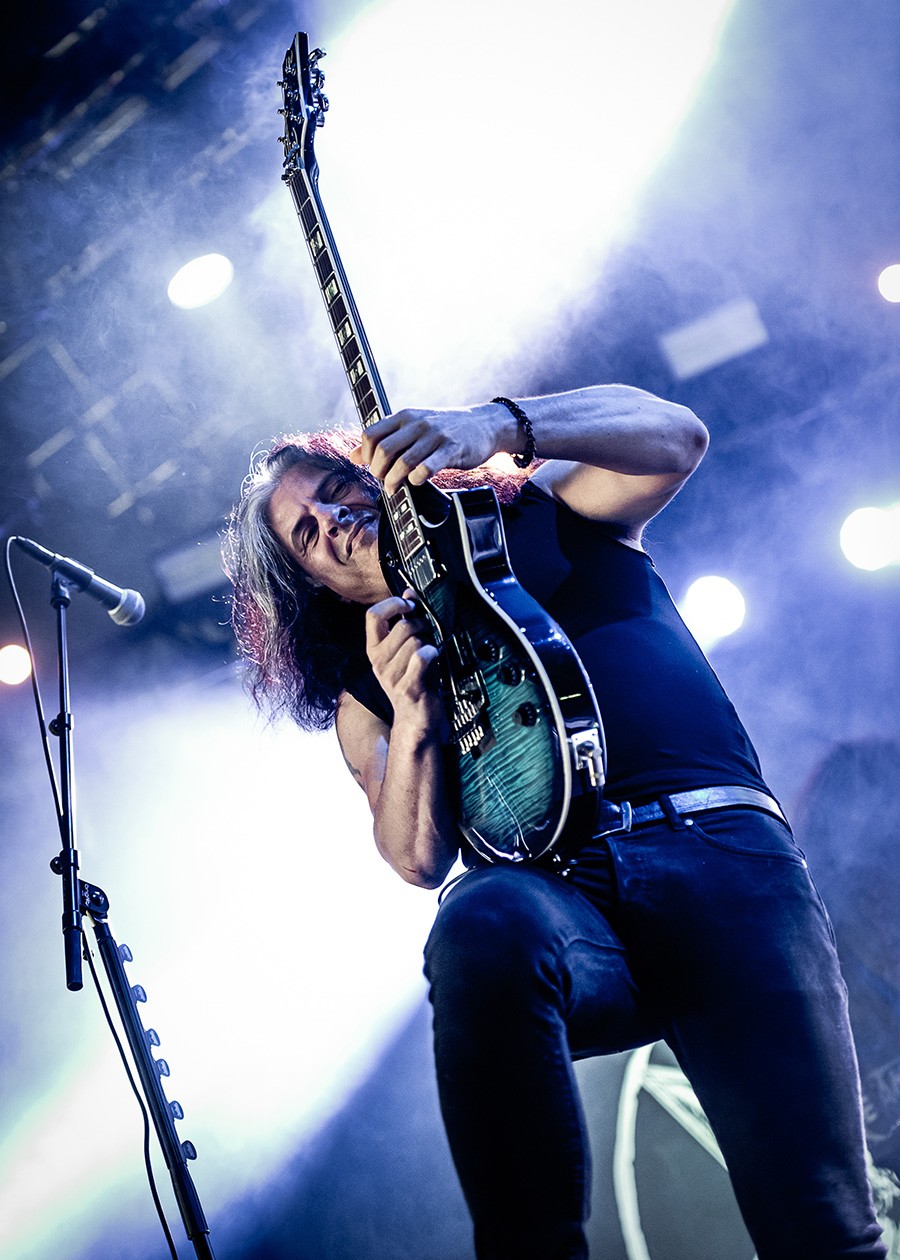 We started our interview with legendary Testament guitarist Alex Skolnick — safely socially distanced by 3,000 miles — by asking what he was doing while both of us were in our respective lockdown zones, “Keeping busy!” was his immediate response, and with a brand new album out that day, it was easy to see why this ESP player had a lot on his plate at a time when many others were binge-watching Tiger King on Netflix.

We spent some time this morning listening to Titans of Creation, the new Testament album, and it may one of the best you’ve ever done.
Thank you!

Walk us through the process of creating that album with your bandmates.
It’s different than it used to be. Formerly, making a Testament album involved us meeting twice a week in a rehearsal studio and working out parts in the same physical location. Now we live in different places. I live in Brooklyn. The drummer, Gene Hoglan, is in San Diego. The rest of the guys, like a lot of Bay Area residents, have migrated outwards from the city. Thankfully, technology helps us accommodate that situation.

How does that work?
It’s a combination of coming up with ideas on our own and then working through them together. There are aspects of it that actually work better than the old way. I’d put together demo-worthy ideas on my own, and by doing that, I don’t have to explain, “This is how the drums are going to go,” and so on. Then we get together, and certain songs stick, certain ones don’t. With some of the songs I don’t compose on my own, I’ve given input on the arrangement and which riffs I like better, stuff like that.

Do you recall when you first heard about ESP Guitars?
Yeah. I remember because it the first time I ever heard of the city of Düsseldorf.

Wait, what?
It was an ESP sticker that someone had on their guitar case. It said, “ESP Guitars. New York, Tokyo, Düsseldorf."

Sweet! How about the guitars themselves?
I was always a fan of guitar parts and custom made guitars built from various parts, and I guess some people were getting their parts from ESP at the time. There was a cult following for ESP necks and bodies. Once Metallica started getting more established, I’d see them playing ESPs, and I also remember seeing George Lynch in playing them in videos. That was when I remember seeing the ESP logo on completed guitars, and I was like, “Oh yeah, those guys."

You became an ESP artist with the introduction of your first ESP and LTD Signature Series models in 2013. What factors went into the design of that guitar?
When i first emerged publicly as a guitarist, I was playing much more modern guitars, as opposed to classic guitars. Then I went through a phase in the ‘90s while I was developing my own instrumental and improvisational side where I rediscovered classic guitars. But once Testament got resurrected, I was in need of a real guitar that would cover both sides. I wanted to make sure that the instruments had the tone that measured up to the classic guitars I was playing, but I also wanted them to be a little easier to play. Some of my classics have a great sound, but can be tough to maneuver around for very technical playing. So, I wanted a combination of classic tone but playability that was a little more user-friendly for technical playing. ESP was the one company that got where I was coming from. 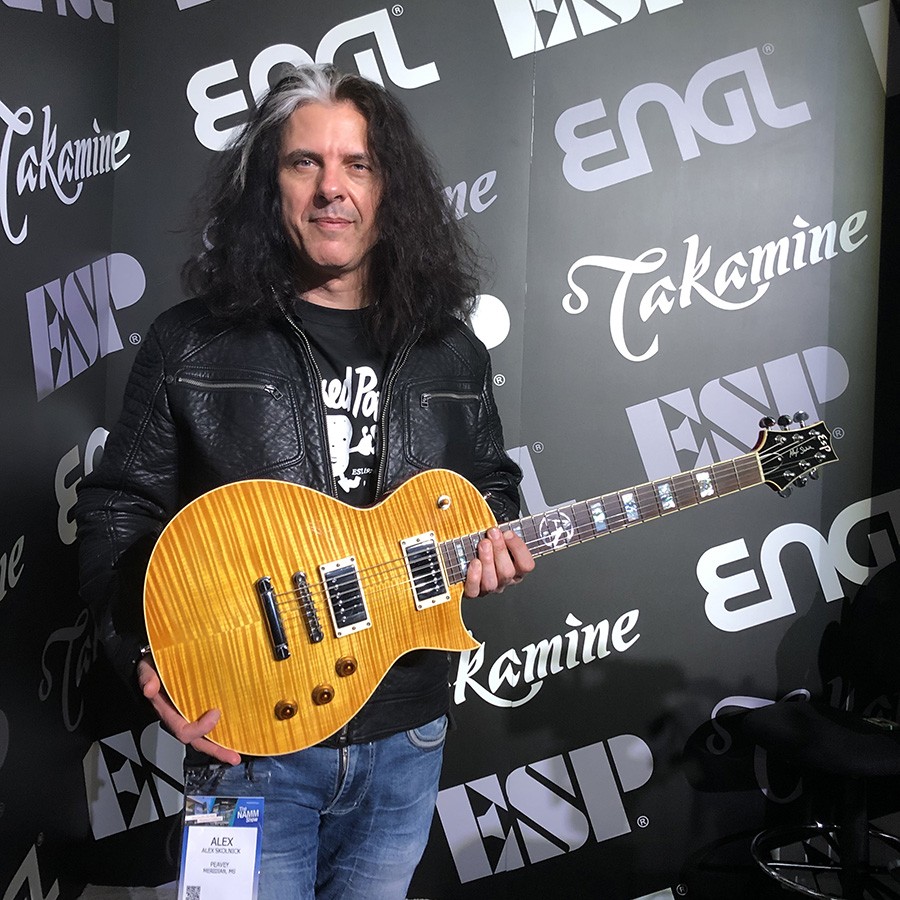 It’s obviously a weird time in the world right now, and both here in LA and where you are in New York, coronavirus is very serious and has yet to peak. You’ve had some effects very close to home with members of Testament having contacted the disease. First, are you okay and healthy?
Yeah, thanks for asking. I seem to have been one of the lucky ones. I was very surprised to find out that so many folks from our tour were falling seriously ill. I did have a cold right after the tour, but it felt very normal. It’s something you expect on the road, especially after grueling tours, and this one had lasted a month and a half. By the time I was over the cold and feeling myself again, I was hearing from other guys who were getting severe fevers and other symptoms. Fortunately, everyone seems to be getting better, but it’s very disturbing to hear those stories.

It’s not something we’d prefer to dwell on, but it’s obviously affecting many people in the music community overall.
It’s terrible, with all these great names who’ve been passing recently. I mean, Bill Withers. Ellis Marsalis. Bucky Pizzarelli. And Adam Schlesinger.

Yeah, 52.
It’s very sobering. It’s a shock. I don’t think anybody realized it was serious to the point that there was going to be a disruption to every one of our lives. It’s becoming more clear every day how serious this is.

And here you are, with a new album out today, and I’m sure there’s a huge desire to get back out on the road and play these songs. What do you say to people who might be already getting impatient while following the “stay at home” directives?
Get used to it. You don’t have a choice. There been some very good spots by high profile individuals; Larry David did one where he was saying, “Just stay home and watch TV.”

We saw that.
Also, there’s a meme going around that goes, “Other generations were being called to war. You‘re being asked to sit on your couch.”

Good advice. On a different topic, you’re unlike a lot of ESP artists in that you’ve explored a wide variety of musical genres as a player… not justly dabbling, but releasing music and touring as a jazz artist. For some of the people reading this who might only be into rock and metal, who are some jazz guitarists they should check out to appreciate the genre some more?
I would say the first guitarists that pulled me that way were the electric jazz players, guys like John Scofield and Mike Stern. I first heard them with Miles Davis in his ‘80s electric period. Fans of traditional jazz probably wouldn’t agree that it’s the best stuff, but for me it was a gateway to jazz. At the time, some of that music didn’t even register as jazz. Some of it has screaming guitars! Soon after that, it was made clear to me that to gain any kind of grasp on electric jazz technique, you needed to dive deeper into traditional jazz. With a lot of those players, they came from a traditional jazz background and only started doing electric jazz out of necessity.

Who were some of the more traditional jazz guys you looked into?
Wes Montgomery. Early George Benson. Pat Martino, who, by the way, is a link between straight ahead jazz and the more electric sounds from albums in the ‘70s. 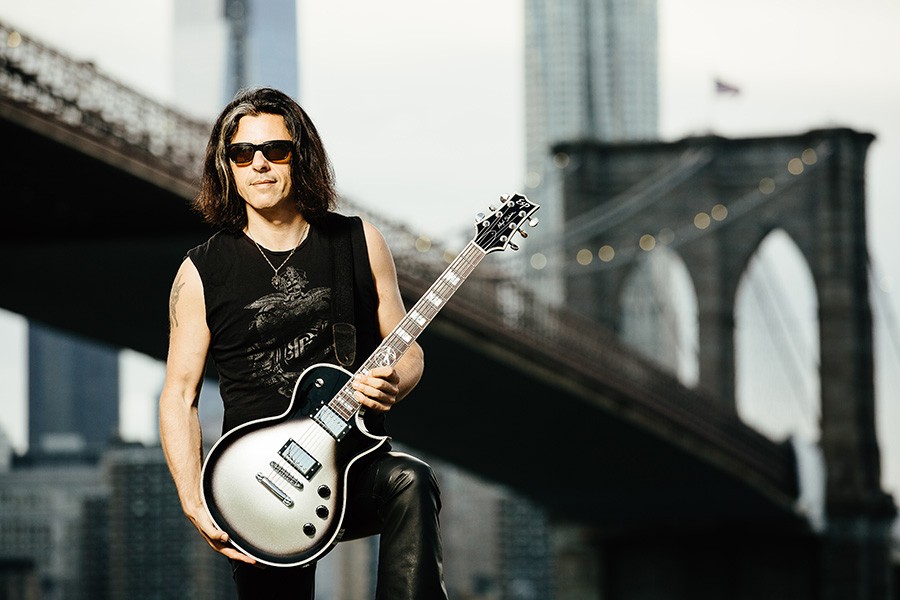 While everyone is stuck at home, it’s probably a great time to practice and improve your chops. Is there a quick tip you can give the ESP community for some worthwhile practice techniques?
I always recommend starting slow. Even slower than you think of as slow. If you’re trying out some jazz, don’t start with Scofield and Stern! Go back much further and start with Charlie Christian. It’s really the same thing with rock. Don’t jump in right away and try to play Kiko Loureiro and myself. Don’t try to learn Van Halen or Randy Rhoads licks before you’re ready. Go back way before all of us and maybe check out Peter Green, or Mike Bloomfield. Listen to guys like that, who represent the roots of the playing. Play along with them.

Good plan.
The other thing is to be honest with yourself about where you are musically. If you’re having trouble playing a Santana lick, you’re not ready for the more technical shred stuff. It doesn’t mean you won’t get there. You’ll often find that working on music that doesn’t require you to be as technically proficient, the music itself is more soulful and will make you a better player in the long run.

I am happy to see this post. Alexander Nathan Skolnick is one of the famous American musicians who is best known as the lead guitarist in the thrash metal band. I am a big fan of Alex. His music is too good. Thanks for sharing. trinity builders kochi kerala

This is one of my favorite Artist and I used to watch his shows whenever possible. He is such a good guitarist and I am so much addicted to most of the works. Thanks for sharing about him it gave much more idea about this artist www.designyourowndiamondring.com