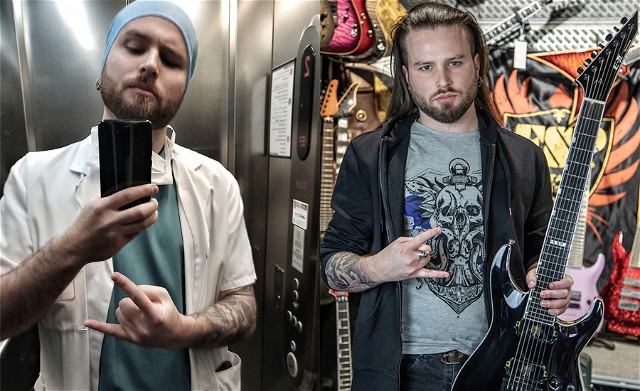 While many of us are trying to defeat boredom while being confined to our homes, French ESP player Nils Courbaron doesn't have the time for the luxury of laziness. Instead, he's battling on the front lines of helping to fight the coronavirus pandemic that's having a huge effect on the entire planet right now.

Even when things were a little more normal, Nils had been busy dividing his time between performing in three different situations... as the guitarist for Norwegian symphonic metal band Sirenia, playing in Think Of A New Kind (a French death metal band), and working on his own solo material. When he wasn't touring or recording with those bands, he was already working as a nurse in a surgical department of a hospital. However, once COVID-19 began having its devastating effects, Nils volunteered to move to working as a nurse in an intensive care unit, placing himself directly in the targets of the virus as he treats dozens of patients each day who've been infected. France, as you may be aware, was hit particularly hard by COVID-19, so Nils has been putting in long hours in fighting to save as many people as possible.

In happier news, Sirenia is currently working on a new album with a projected release date in the fall, and Think Of A New Kind just released their excellent album Ideals Will Remain in February. We recently also posted a video with Nils doing a playthrough of his solo track "A New Era", with him using his ESP E-II Horizon NT-7 EverTune, a monster of a guitar for a beast of a player. Nils is currently hoping that things will ease up so he can perform at this summer's Hellfest Open Air. Barring that, he's slated to play at the Sabaton Open Air fest in August. Please wish him luck in both his musical and health care endeavors!

Beyond buying his music, there's something you can do for Nils. In his language, he'd like you to RESTEZ CHEZ-VOUS... or STAY HOME, as we'd say in English. The most effective way to slow down the spread of COVID-19 is by limiting your interaction with other humans, and especially to avoid exposure in large groups. If you can do that, we'll make it through this and we'll all be rocking together again eventually!

Guitars have become very trendy these days as the marketing lies in the world of music mostly. The https://assignmentjunkie.co.uk/write-my-research-paper-for-me is also persuading the guitar performance and is really encouraging the talent to play the guitar. Music is a medicine to smoothen your soul and it seems to b true now.