The Story of Me and ESP, by Bruce Kulick 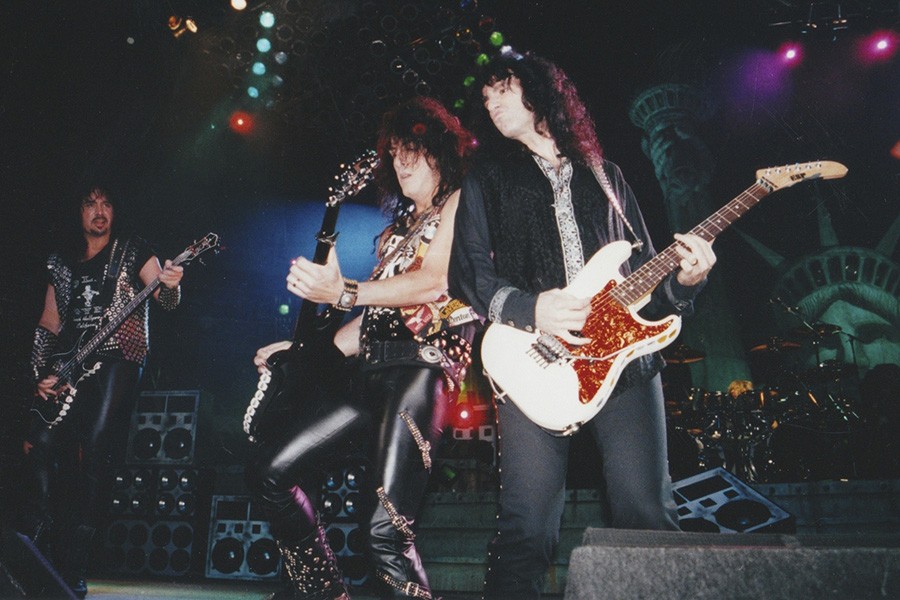 With 2020 marking ESP's 45th anniversary, a number of the artists who discovered ESP Guitars in our early days have reminisced about working with us from the start. Few are more qualified to talk about the origins of ESP than Bruce Kulick (Kiss, Grand Funk Railroad, solo work), and he sent us his personal memories of the experience.

Being the new guitarist of KISS and living in NYC created an opportunity to be involved with a Japanese company who had recently set up shop in downtown Manhattan. Some friends of mine whom I had known from Queens, since they were musicians and loved guitars like I did, got jobs at the company. Electric Sound Products, with the large ESP block letter logos, became a real curiosity for me once they contacted me about checking them out.

They were known in Japan for many years, but new to the US. My early KISS years for Animalize consisted of Charvels that were rare, all custom shop creations sold to stores like Sam Ash on 48th street. Those were valuable since they had all the features needed for me joining KISS, but the issue I mostly had was them was the neck shape. It was built more for shredding, a flatter radius and a neck that sometimes was wider than I was used to. I could adapt to them, and they all were excellent guitars, but I was still curious for other brands. Suddenly I am holding a beautiful model from ESP, called a “M-1” for “Metal guitar” I presume. It had a flip flop blue finish and the neck was closer in my hand to a vintage Fender Strat! So I was thinking, wow, a super hot Fender guitar with a Floyd Rose! They were so happy to work with me, and it’s free! I was paying for the Charvels and the company was based in California, so it was not easy for me to pop in like me visiting ESP in downtown NYC. 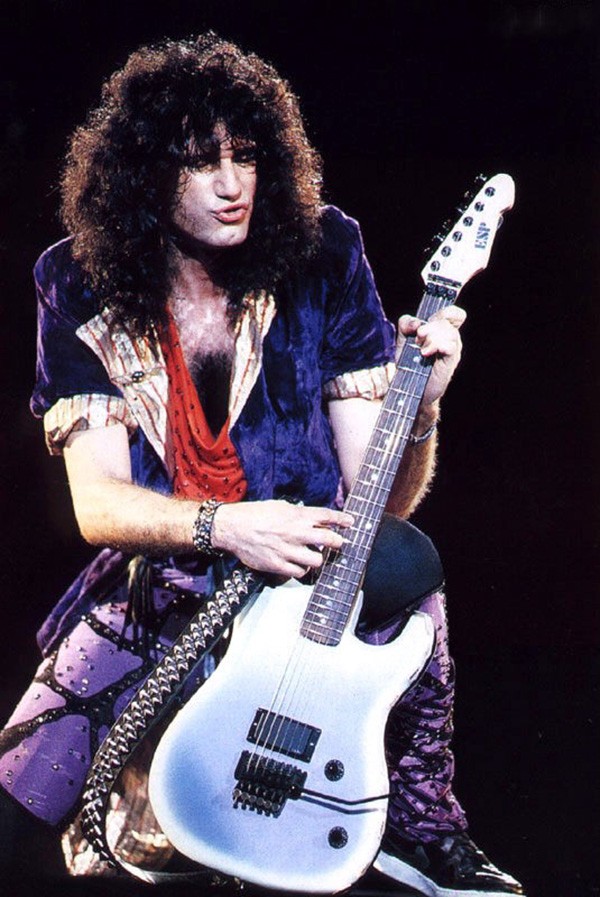 Although I continued my relationship with Jackson/Charvel for a few more years, my connection to ESP was much stronger. I was featured on the cover of the first price list for ESP at NAMM. A photo from the Asylum tour performing with the Flip-Flop Blue M-1. It was a simple catalog advert, and it was actually in black and white! This M-1, my first ESP, featured just one pickup. Because of a Long Island repair shop owned by Joe Pichkur, who was a fan of these pickup designs, the ESP got an EMG. Later on, I realized that I enjoyed a passive pickup much more, and replaced it with a Seymour Duncan Custom pickup. Two knobs, (Volume and Tone) and a black Floyd Rose. Add to it a nice Rosewood fingerboard, and this guitar was a big part of my KISS Asylum tour.

It was featured during my big guitar solo each night. During this part of the show, it’s only me performing with my ESP and I was covering the stage in a giant riff-a-thon going back and forth towards the crowd. And then finally, I’m center stage doing hammer-on runs, and banging the guitar on the metal grid covering my monitor. I would then offer the guitar “to the Gods” raising it triumphantly over my head while it was feeding back through the giant Marshall amplifiers. Classic KISS style soloing, and I was very much mentored by Gene Simmons!

Personally in my opinion, ESP was making the best replacement Strat style necks. Some with banana hockey stick headstocks, to modified Strat headstocks, to actual Fender style headstocks. In time I learned they were supplying Kramer Guitars with parts including necks and bodies. So, for example my iconic Yellow ESP Banana guitar and the White Revenge M-1, were bodies and necks chosen by me in NYC at ESP Guitars. Necks were in a barrel, and bodies on storage racks! They would do the rest, putting it together expertly. Honestly, the quality, tone, and playability were in my estimation amazing. My love of these M-1’s is still going strong. 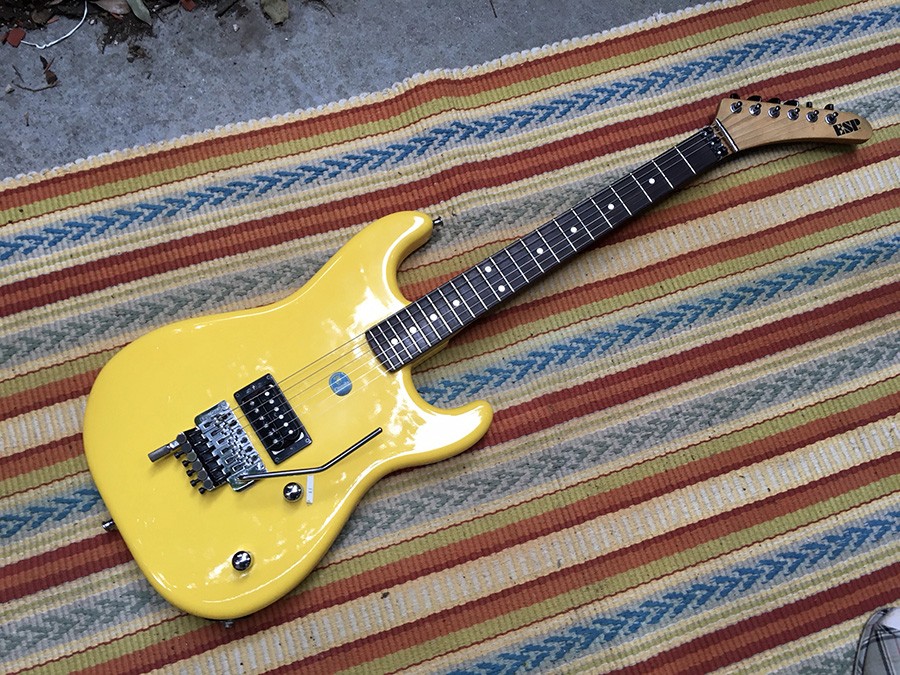 My second guitar from ESP was even more unique. It became very iconic with the KISS Asylum tour, and the video “Who Wants to be Lonely”. My “Multi-Swirl” M-1 guitar has a cool history. It was special, because of the details of the paint finish and the parts. I have to give Paul Stanley credit for the concept of the multi-swirl design, and with his guidance, ESP created this finish and even went on to use it on other models and even for other artists.

By having a base coat of the guitar a certain color, and creating the swirls with other paint colors, each instrument made was unique, but similar enough to be associated the first one created. In addition to the colorful finish, the parts of the guitar, that could have different finishes were mixed up.

Usually a Floyd Rose Tremelo or tuning pegs are Chrome, Black or Gold, and in this case the guitar has a mixture of these colors for all the parts on the instrument. Making it again, super unique. A fast feeling Ebony neck, with one Duncan Custom pickup, I had another strong performing M-1 model that had plenty of “Look at Me!!” 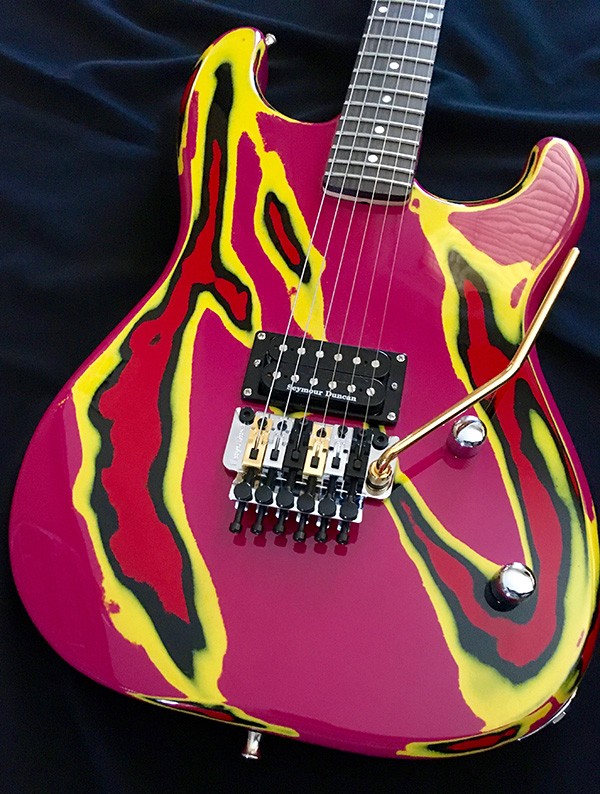 Moving past the Asylum tour, I was looking at the production line of ESP especially models like the Horizon and the Mirage. Naturally, you should know, the Horizon ESP Model became a big part of my next wave of ESP guitars used by me. One particular sunburst Horizon was featured very heavily on the Crazy Nights tours in Europe and the US, and another Red Horizon was very popular for me. I even had a black one that was dressed up in Radioactive symbols too. I was experimenting with the factory in Japan challenging them for mixing up the wood for the sides, and top, but the power of the model was always that long neck thru design, with alder sides. A fast Ebony neck, and great craftsmanship, would round out this two pickup beauties. During my early years of using ESP guitars, the Floyd Rose would be top mounted. Some years later it was changed due to some design preferences to recessed Floyds. I am still obsessed with the top mount design, since it reminds me of the early Horizons and M-1 Models that were so important to me.

I continued to challenge ESP’s Custom shop in Japan, with “make me an Explorer but better than Gibson can”! The two I got, are still in my collection and they are SUPER! An aged white one with gold hardware and a black one with mirror pick guard and chrome parts. These futuristic style guitars, were a big part of my 1992-95 KISS years, and the black one even featured on the cover and back of KISS Alive III. 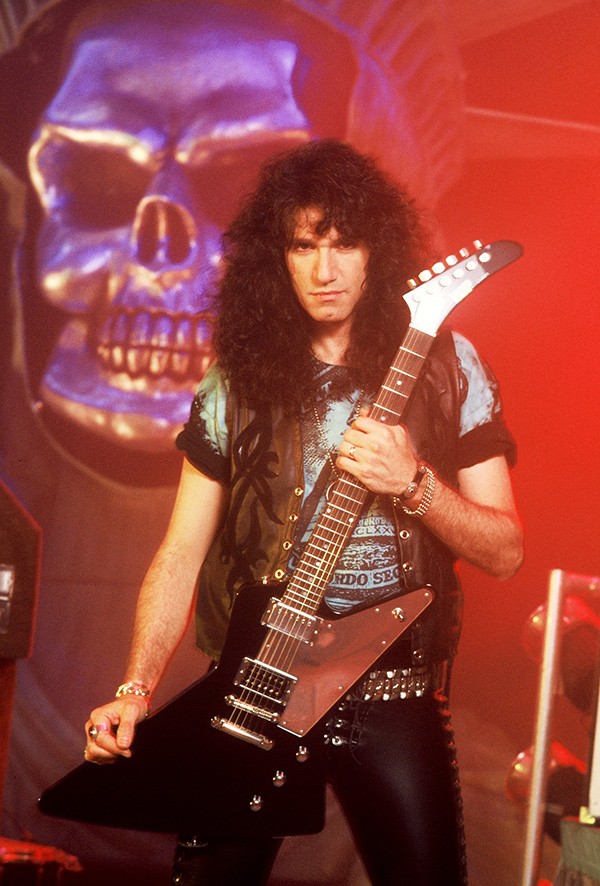 Through my KISS years, there were many other models I posed with, played and recorded with. The Vintage Plus line, another more versatile Super Strat design has been a big part of my career. I also was involved with a Bruce Kulick Signature model just prior to leaving KISS, that was a throwback to a neck thru style of SG meets a BC Rich Eagle design. Only about 100 neck thru and bolt on’s were created. They are quite rare and popular. Black with a MOP pickguard, nickel parts and two humbuckers.

The introduction of the Viper line of guitars for ESP was a welcome idea, a super SG style design, slightly thicker and featured an offset body. They started to use factories in Korea and beyond that all created quality guitars. So this new line called ESP/LTD became very affordable and popular. Many of the LTD’s I was very supportive of, and I continue to get excited with each years offerings, including the Les Paul style EC-1000 and Eclipse models from Japan. Many of the E-II line also made in Japan are fantastic as well! 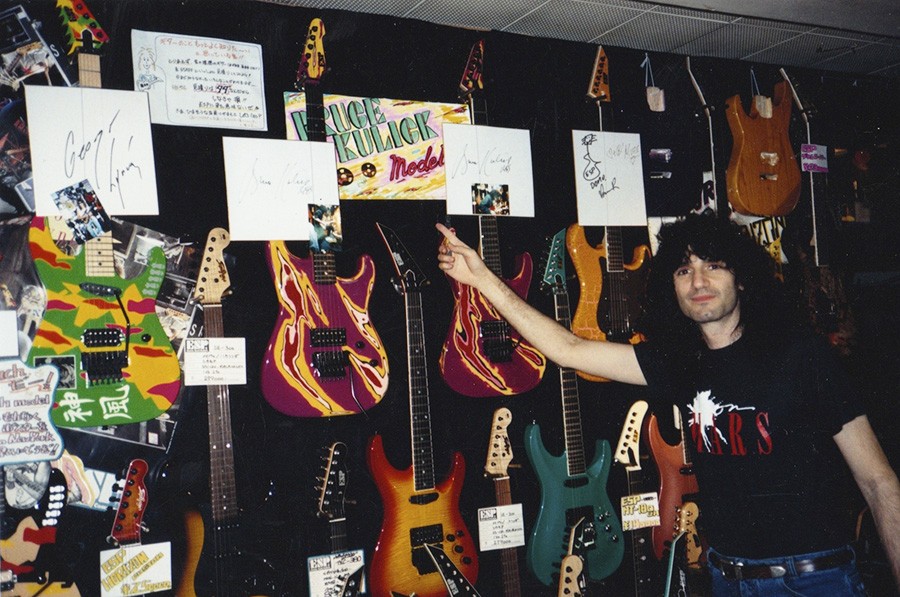 The quality from ESP is always top notch, and the way the company has continued to support me, and work with my requests I am very grateful for. A few years ago I was lucky to find a 2008 M-II model in black, that became my main KISS Kruise guitar, due to its fast action and powerful tone. For me, it’s similar in ways to the Horizons I mentioned earlier.

I was excited to see some new M-1 Models called “1987” being marketed by ESP again that I am currently involved in promoting. Certainly this newest connection in my relationship with ESP, proves the power of the guitar styles used from my early KISS days, have become in vogue again. Due to the growing popularity of these early models, I am looking forward to the future in what other throwback instruments will be introduced to rock guitar fans around the world. 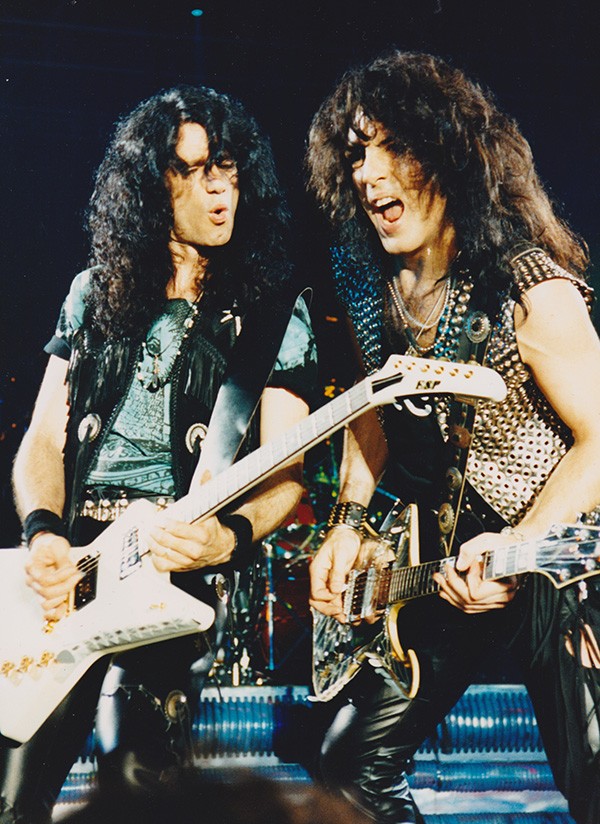 All photos courtesy of Bruce Kulick

These are really cool articles on the early days, I love seeing the photos of old vintage ESP Guitars . Keep em coming!