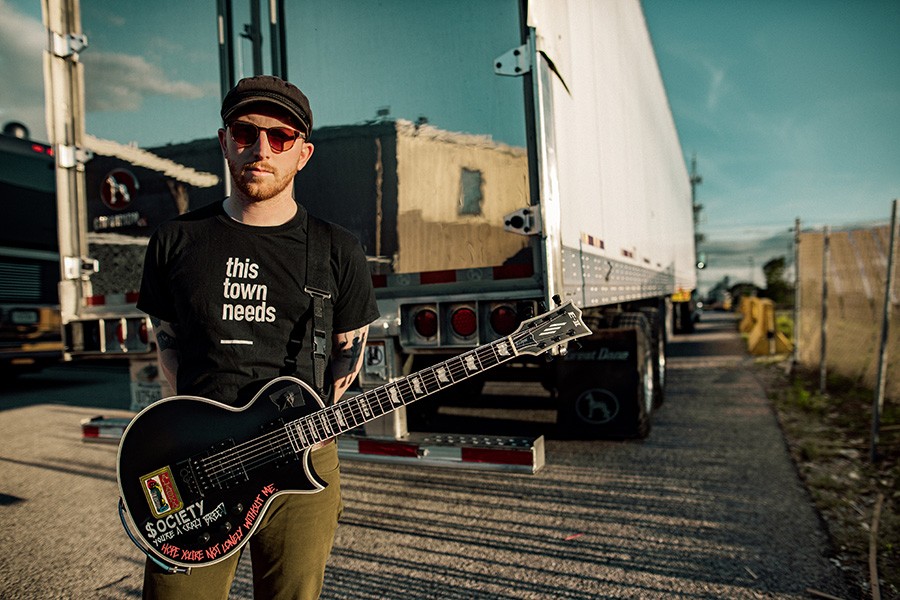 Hailing from Sheffield, UK, While She Sleeps is one of the most lauded bands in the metalcore realm. Guitarist Mat Welsh is a founding member of the band, and we caught up with him in a brief moment between finishing a tour of Europe and starting their first-ever North American headlining tour.

Do you recall when you first became aware of ESP guitars?
Um, probably in about 2005, I think. I’d been listening to loads of early metalcore, and I went and bought an EC-1000. I’d had another guitar before that, and as soon as I got the EC-1000, my mind was blown at how solid it was. I tracked the first few records with that guitar.

What led you to want to play ESP?
I’ve always been a massive fan of classic-shaped guitars. My dad was a guitarist and had guitars around, and I loved the single-cutaway shape. I’d play my dad’s guitars, but they were a nightmare with feedback, and they wouldn’t hold tuning. So I thought, “I want a guitar that looks kind of like this, but has engineering to it that can with hold up for extreme types of music.” The EC-1000 did the trick instantly. It’s so rock solid.

What ESP models are you playing now with While She Sleeps?
I have different guitars for different tunings we use. My main guitar in C is the LTD TE with an EverTune. The EverTune is so, so good. I also two SN-1000s and both have Seymour Duncan Invaders. The SN-1000s are great in the same way I said about the TE... so solid, not too heavy. The unfinished necks are so nice. ESP necks are a little thinner than a traditional neck, which I like. 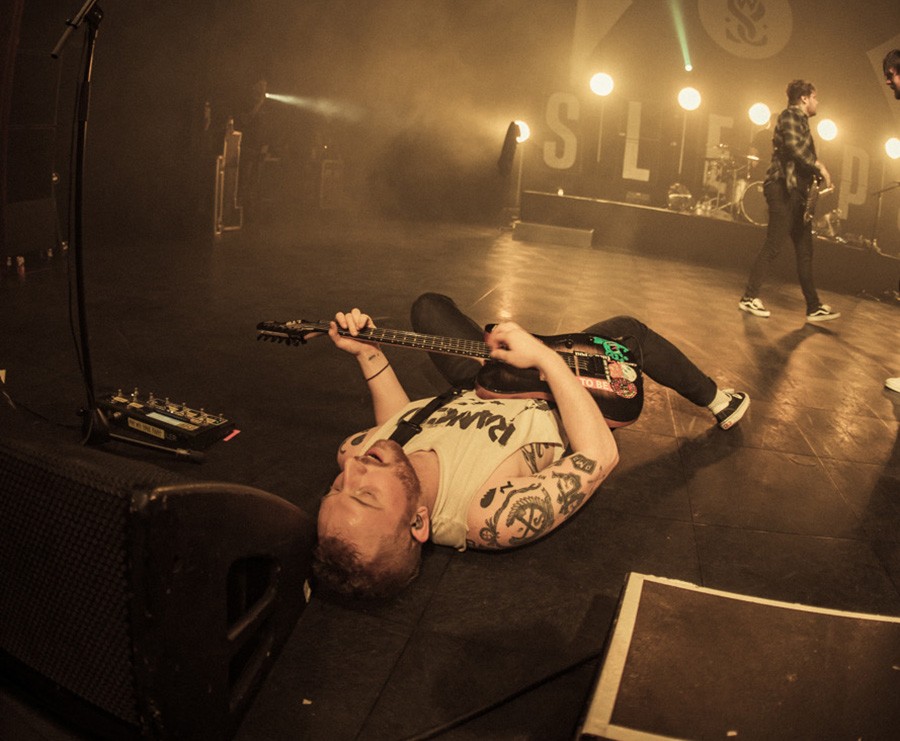 What are some other things about these guitars that make them right for you?
For one thing, our shows are quite an energetic show, so the locking tuners are key for me. The guitars need to be really sturdy with tuning, and with ESP, there simply are no tuning issues. Especially when the guitars are flying every night, going through all different climate changes, to have them always hold tune is amazing, even with low tuning. I really like the Seymour Duncan Pegasus pickup. It’s so chunky. But overall, these guitars are like, no rills, not trying to show off, but built solid without loads of bells and whistles. It has all the bare things you need. I’ve thrown these guitars around and they always survive.

You guys just wrapped up a European tour and are about to start your first-ever North America headline tour. Most people who play guitar as a hobby really don’t understand what a guitar goes through on a tour and how important reliability is.
Think about playing different cities every night, traveling with a guitar in a trailer that’s going from really hot environments where you’re really sweaty and super hot, to being in a freezing cold trailer or the luggage compartment in a cargo of a plane. Having a guitar that can withstand that day in day out, that’s the whole thing. The most crucial thing is that the guitar can hold up and still be nice to play every day. Finding a guitar that can handle those different environments is so much harder to find than just a nice guitar to play. It’s like a car that can break down. If you take a basic car and try to drive around a rally track, it would last 1-2 races and be gone. Guitars for touring is the same kind of thing. They have to withstand that kind of punishment, and since I’ve been with ESP, I can tell you that these guitars are built to last. 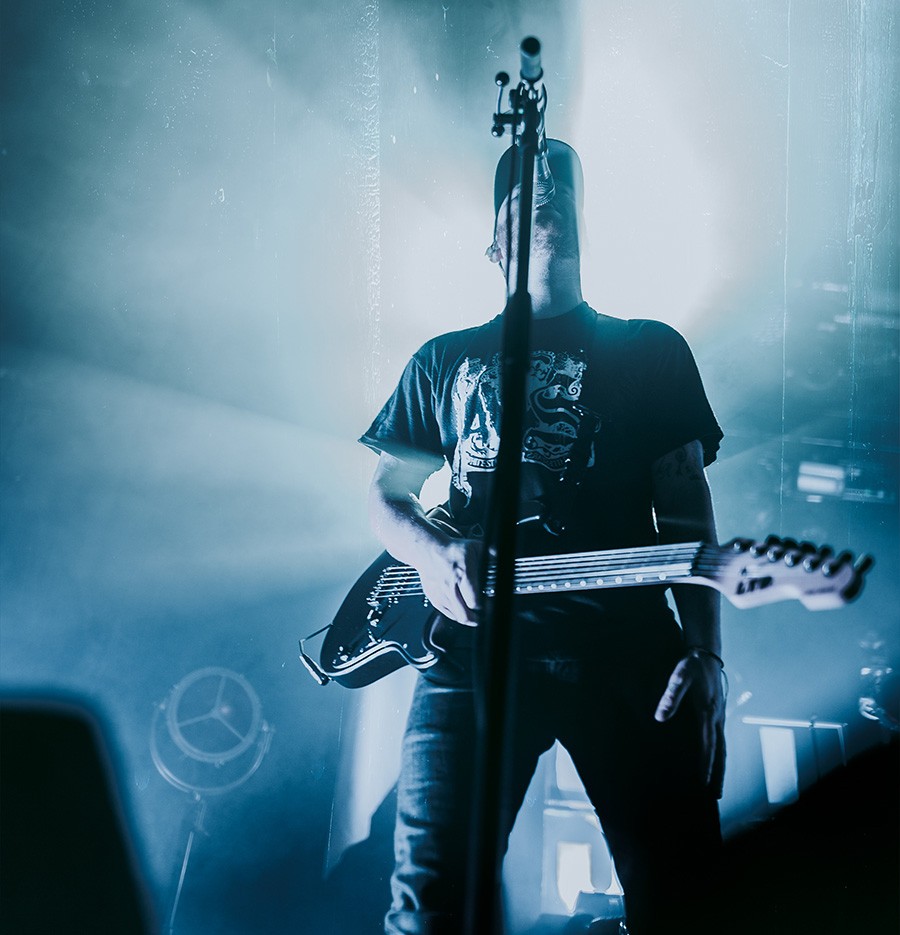 Tell me about the creative process in While She Sleeps. I noticed that you give the whole band songwriting and sometimes production credits on your albums.
Yeah, our other guitarist Sean is an absolute maniac in terms of songwriting. We’ve been home for this tour for basically a week today, and he’s been in the studio every day. He’s the main writer in the band. I do a large amount of the lyrics and melodies, and I write chorus ideas. I’m a rhythm guitarist, so I don’t spend a lot of time doing lead. It’s like a traditional rock band in that he comes up with ideas, and we get together and we start putting them together. We’ll put our heads together and turn his ideas into a song.

What kind of music have you been into lately?
I really enjoy the latest Turnstile record and the new Northlane record, but I like loads of different styles. Sights & Sounds is a great band out of Canada. I listen to a lot of Joyner Lucas, a rapper, for vocal inspirations. I actually listen to a lot of rap and old school hip hop.

How about some of your biggest all-time musical inspirations?
Definitely Rancid. I’m also a huge Thrice fan. Them and Rage Against The Machine. 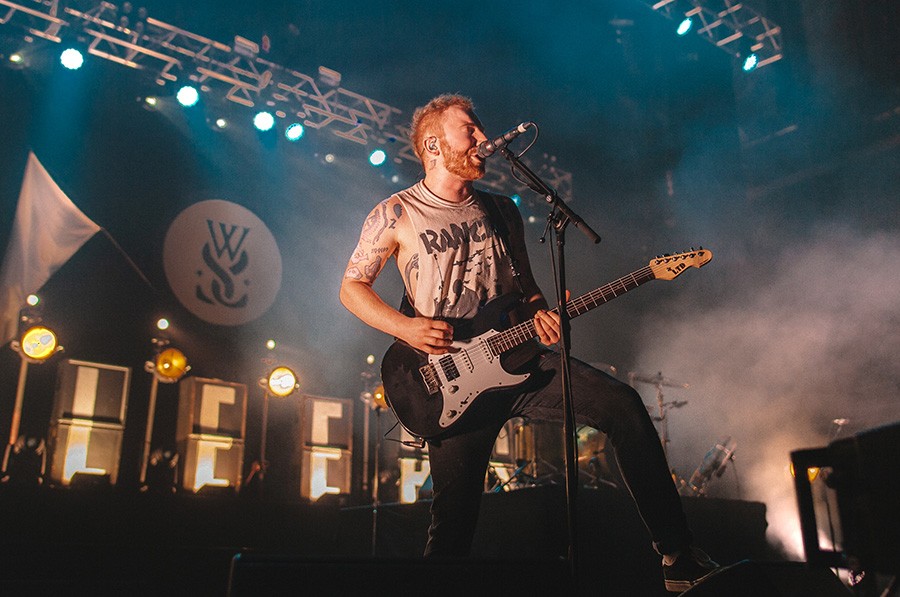 Get While She Sleeps music and tour info at their web site.