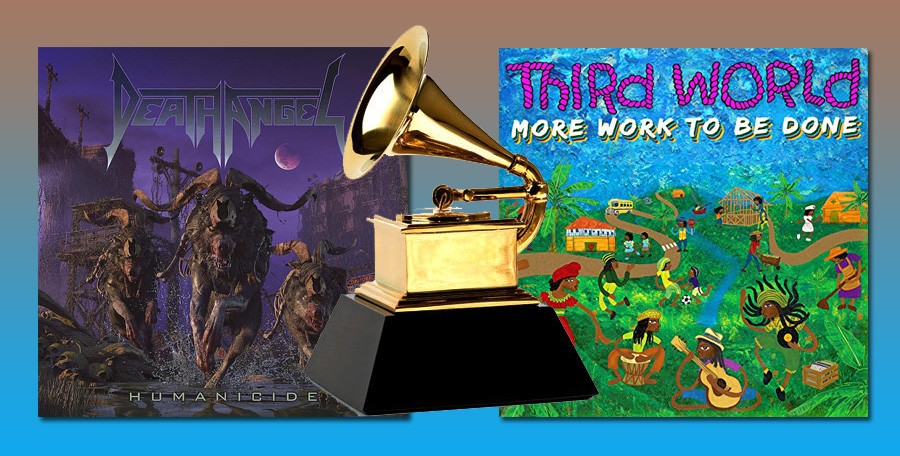 When the annual nominations for the Grammy awards come out, it's usually a pretty good day at ESP, since more often than not, some section of our artist roster gets represented with the honor of being named a nominee. With the 62nd Grammy Awards scheduled for January 26, 2020, we're happy to send our congratulations to two fine members of the ESP artist family: Ted Aguilar of Death Angel, and Stephen "Cat" Coore of Third World.

Ted and Death Angel are unsurprisingly up for the "Best Metal Performance" category, nominated for their album Humanicide (Nuclear Blast Records) that came out in May. The legendary Bay Area thrash band's ninth album, Humanicide sold well around the world and was critically acclaimed. Ted Aguilar is an ESP signature artist, and his LTD TED-600T signature model offers neck-thru-body construction and a killer "white on white" design aesthetic with a Snow White finish, white binding, white controls, and even white covers on its EMG 60 (neck) and EMG 81 (bridge) pickups. We did an ESP Artist Spotlight with Ted earlier this year that you may want to check out.

Whether you know it or not, ESP is also very popular in the Reggae genre, and we are very happy for Stephen "Cat" Coore and his iconic band Third World for their nomination in the "Best Reggae Album" category for More Work To Be Done. Released in August on Ghetto Youths International Records, it's the 22nd studio album by the band that formed in 1973, who were also nominated in 1988, 1990, 1993, 1996, 2000, 2004, and 2006. Here's hoping this is their year to take home the statuette! Here's our ESP Artist Spotlight interview with Cat from 2018, where he discusses why he chooses the LTD TL Series for his performances.

I look forward to one day watching his live. Definitely great!

Met Ted on the Megacruise. Didn't even know who he was.