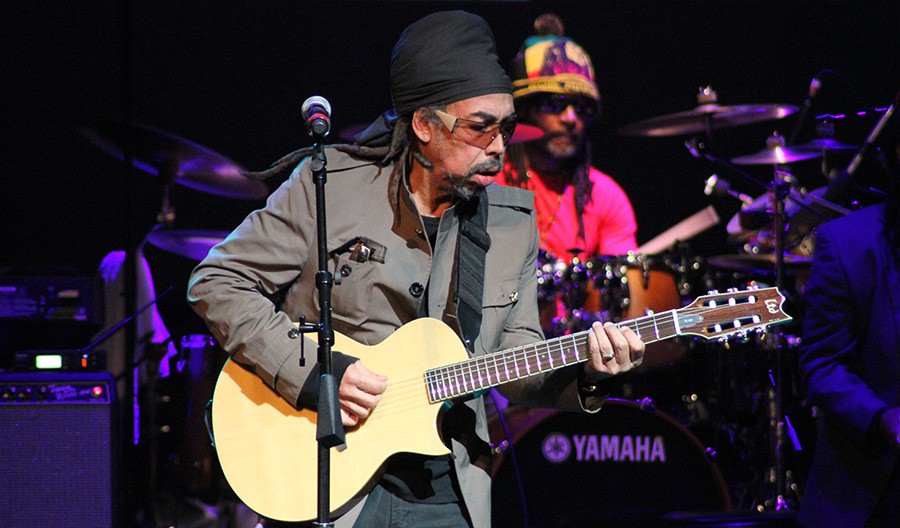 Most people understandably associate ESP and LTD with heavier forms of music, from hard rock to black metal and beyond. But the real scope of ESP isn’t limited to any particular genre. Instead, our guitars and basses are chosen by all musicians who require an instrument that offers the very best in sound and feel, and those players range from pop to funk to jazz and much more. In the case of Stephen “Cat” Coore, a legendary part of Jamaica’s music scene going back to the late 1960s, the genre of choice is reggae.

Cat is a founding member of Third World, a highly influential group that started in 1973 and is still going strong today. Over the decades of his career, Cat has worked with and toured alongside the biggest names in reggae and rock music, including Bob Marley, Santana, and many others.

Cat, tell us about the role of guitar in reggae.
To discuss guitar in reggae music, you got two sides. The first side is that the guitar started as mainly an accompaniment instrument that rolled along with the bass line. That was early on. That was more in those days what guitar did. Play along with the bass, or as a complement to the bass and drum.

But with the advent of “Concrete Jungle”, things changed. All of a sudden, rock got into reggae. Moving forward from there, it changed so much, with rock guitar solos in reggae songs. I do take some credit for it, but also I think that “Concrete Jungle” probably was one of greatest, best guitar solos ever. It became a classic, like “Black Magic Woman” and other great rock songs.

You’ve been playing the LTD TL Series recently.
Yes, the nylon string version. The TL-6N. I love it. I really love it.

What led to the choice of that guitar?
To understand, you have to go back aways. I have a history with ESP. many years ago, I went to Japan. I was over there, and a nice guy came up to me. “How do you feel about ESP Guitars,” he asked me. I said, “As far as I know, they are really cool.”

He said, “Alright, we want to come and check you out.” I didn’t realize he was an ESP guy! After he heard us play, he gave me a beautiful Tele-style guitar. I started my relationship with ESP right there.

Now, I’m not really a Tele player as such. After I enjoyed that guitar for awhile, I left it at Mikey Bennett’s studio in Kingston. It ended up being played on many songs. That’s what got me into ESP.

Meanwhile, I kept looking for guitars that would work for me. My son (acclaimed reggae bass player Shiah Coore) was saying ESP is really cool. So I looked at what ESP had to offer, and that’s the one that caught my eye. 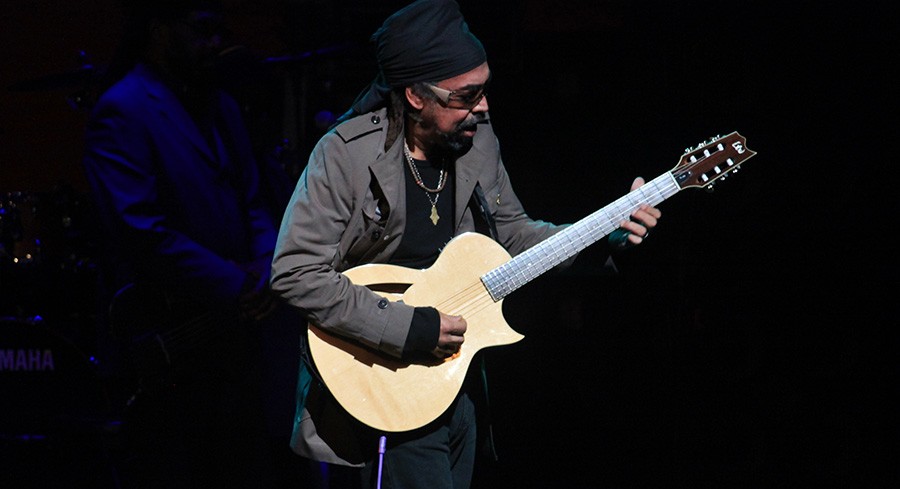 Have you tried other ESP models?
Oh yes. I said to (ESP artist relations director) Tony Rauser, “Look man, send me a guitar,” and I tried it and I love that too. I’m down with the whole ESP way of thinking. It’s all about really high quality. When I think of the value of an ESP instrument, it’s up there. It’s quality. I’m happy I’m playing their instruments. They don’t ever let me down, and Tony’s a cool guy.

The TL-6N is the nylon string version in the TL Series. What’s appealing about playing nylon string guitars for your music?
A nylon string guitar is embedded in my history. That’s the guitar I used first. It’s a different animal completely, compared to steel string. When you approach it, you find that you’re playing differently. Even tuning differently. With a nylon string, you have to be careful with tuning. It’s so cool that LTD put the tuner in the actual guitar. I don’t need to use anything else.

That tuner is part of the Fishman pickup and preamp system we chose for the TL Series. Tell us about the tone you get from it.
There’s never anything to complain about. Fishman was a good choice. They are a top company. The guitar sounds good and tunes up well.

I’ll tell you something else: they travel quite well. I do a lot of traveling. And the circumstances of reggae traveling… we’re not talking Bon Jovi. Reggae traveling is different. If your guitar can hold up to reggae traveling, it’s good.

Is the feel and balance of the guitar important to you?
Yeah. 100%. That’s why I like the neck. It’s a lot more comfortable than some other guitars I’ve played. I find the neck so nice. So yes, the feel of it is so important.

Many musicians who play ESP are into very technical forms of music. People sometimes mistakenly think of reggae as an overly simple form of music, but you have a serious background as a trained musician. How do you balance the complexity of sophisticated music versus the steady groove of reggae?
That’s a great question, but you really just said the answer. It’s the beauty of being in the groove. That’s a testament of the notion that reggae music is overly simple. It’s not. It’s “less is more”, as they say.

In the best classical music, the melody is the lead. Reggae returns to that idea. It’s not mind boggling. Staying with one thing, the pace of the music and its scales, that’s cool too. You balance that. 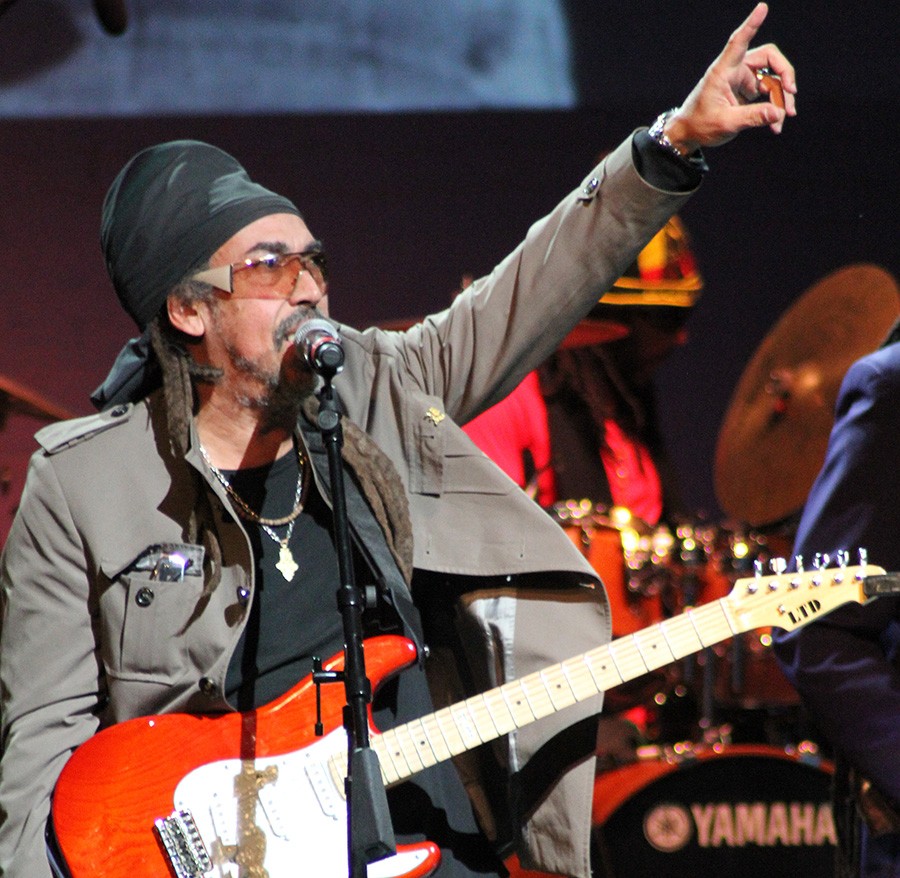 Musically, you’ve seemed willing to incorporate and blend styles beyond traditional reggae in your music. What’s the advantage of staying open to influences outside of one genre?
That’s definitely true, and there’s a huge, huge advantage. I encourage my kids all the time to remember their grandmother’s music. The things that I do draw upon musical forms like calypso, jazz, and funk. It’s so important as a musician to know.

If you think about art, there are not many painters who are only influenced by one kind of art. It’s important for kids to open their mind. There are more things to draw from than just hardcore, metal, rock. If you can do it early, you get more time for that kind of thinking.

You’ve played and toured with some of the most legendary names in reggae music — Sly and Robbie, Bob Marley, and so many more. How do you view your own place in the world of reggae music?
Well, I don’t think about what I’ve contributed to reggae. Instead, I am blessed by what reggae has contributed to me. With Third World, or other bands, I’ve incorporated different styles. I respect every compliment, but the music has done so much for me.