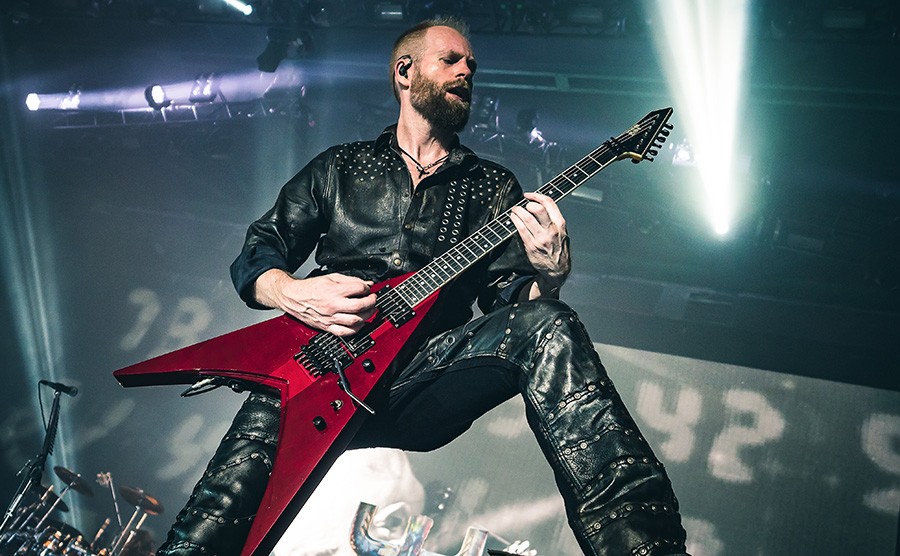 Taking his first professional steps into the world of metal during his teen years, UK-based guitarist Andy Sneap has spent decades as one of the most respected musicians and music producers in heavy music, having worked with bands including Exodus, Testament, Kreator, Arch Enemy, Bullet for My Valentine, Megadeth, DevilDriver, and most recently Judas Priest, whose acclaimed latest album ‘Firepower'' was co-produced by Andy. At the time of our interview, he was on tour with Priest, filling in on live guitar duties for an ailing Glenn Tipton.

You’re currently on tour playing guitar with Judas Priest.
Yeah, we’re in Munich tomorrow, and then we play Wacken on Thursday, then Woodstock in Poland on Friday. We finish this part of the tour in the UK on the 10th. We have a week off after that, and then jump straight on the co-headlining tour with Deep Purple in North America.

If someone had told you at age 15 that you’d be onstage with one of the most legendary bands in metal, what would you have said?
Even if someone had told me a year ago, I wouldn’t have believed it! It’s an odd set of circumstances how it’s come about, but in terms of just playing and being on tour and onstage, it’s good for me. Working with the band in the studio, producing them for most of last year and now playing live with them -- the change is nice. A change is as good as a rest, as they say. It’s fun to go out and play again. To be able to go back and do something where my heart is, with guitar playing on this level. It’s a great experience.

Do you recall what your first awareness of ESP was?
Yeah. I visited the ESP store in Dusseldorf in ’88. The first band I saw with ESPs were Queensrÿche I think. I might be wrong. But I remember the inverted headstock. It was probably on an ESP Mirage back then. But it was a small shop in Dusseldorf.

When did you start getting some first-hand experience playing ESPs?
I really got involved with ESP around 2002 or 2003. It was through Mike in Arch Enemy. I got a couple of his V’s. I’ve been with the company ever since.

What is it about ESP that distinguishes us from other guitar brands?
The first thing that comes to mind is that they’re well made. It’s just a good brand. Everyone’s been good to me at the company, but most of all is that the guitar is really well made. The quality is up there. They’re reliable and they suit me and feel really comfortable.

You played a bunch of our guitars spanning several of the different brands we make. What are some of your favorites?
I’ve got three ESP Custom Shop ones… a black king V with white binding I used when I was Hell three or four years ago. It’s got a titanium Floyd and Fishman Fluence pickups, and I had them make the neck to be the same spec as the Alexi Laiho model. The other one is a red V, with a maple neck all the way through and mahogany wings. We just put Fishman Fluence open coil classics in that and I use it for "Painkiller" with Priest. The third one is again, a V, with a more classic look scratchplate and an Evertune bridge. I had them copy the Edwards V’s that I play for the neck profile on that one, as I find those guitars fit my hands great.

As a producer, you’re tasked with helping cultivate sounds for different bands and artists. What makes ESP a great guitar for recording?
They’re just very stable. You get some of these old guitars that sound great, but tuning is a nightmare in the studio. The Eclipse I have with the Evertune has been such a timesaver whilst recording. When you work with different bands, everyone’s going to have their own favorites of course, and two players can pick up the same guitar and they’re going to fret things differently, or one’s going to hit harder than the other. But all my ESP guitars are rock solid for tuning. 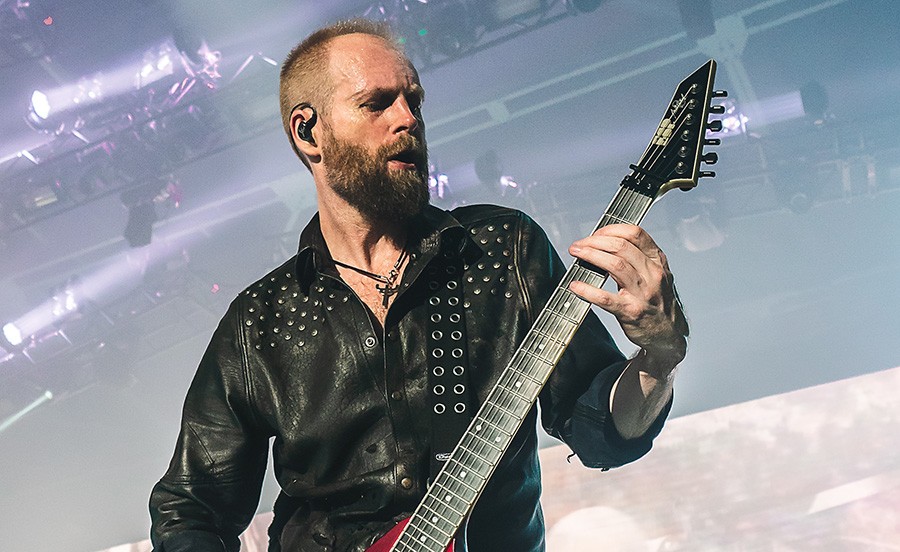 What’s been your perception of the ESP guitars you’ve played on the road?
They’re good. I don’t have any problems. For me, one advantage is that with LTD guitars, they’re filling a price bracket where you don’t expect guitars to be as well made as they are. When you’re out on tour at a professional level, things do happen, and if something happens to my LTD, it’s not like a five-grand guitar is getting destroyed on the road.

It’s funny, because a long time ago, Japanese guitars were frowned upon, and the impression at the time was that they weren’t well made. But today, they really are as good as anything you’ll find. You can’t beat them. From the perspective of an artist, everyone at ESP listened to every suggestion I’ve ever had, and it’s always been for the better. I can’t say enough good things. I’ve had no problems whatsoever. I haven’t had to replace any parts. There have been absolutely no problems on the road.

Is there any kind of intimidation factor when you’re going into to work with a legendary band like Judas Priest?
It’s the highest level, isn’t it? I’m not usually nervous at all when I meet bands, but it doesn’t get any bigger than Priest. I’ll tell you, it was very surreal. I was sitting there talking to them for the first time, and hearing myself say, “I think you should do this and that,” or, “I want to try and get a rougher edge here,” and so on. And in my head, I’m screaming, “They haven’t even employed me yet! Calm down!” But somehow, I said the right things, and they got me onboard. They really are some of the easiest going guys you’ll meet in the business.

Did you feel there was something specific you could bring with you, walking in to produce Firepower?
The attitude I had was that of a fan. I grew up with this music. A band can be in a bubble. It’s a world they create around them and they can be cut off or not quite aware of what the fans want to hear. So you’ll have these thoughts… make it more of a live feel, or that it needs more energy, or whatever. There’s that side, and then also the music side, with arrangements and key changes and all that.

Mostly what I bring with me now is experience. I’ve been doing this for 25 years now. You draw from all that experience, and I guess I’ve reached that point where I have something to offer. It’s a lot of fun as well. But I’m still a huge fan of this music.

Your career took off very early as a teenager. We have a lot of young ESP players who’d like to find a pathway into professional music performance. Any advice for them?
I think that the most important thing I did when I was young was getting together and playing with other musicians. It doesn’t matter who they are, or even if they’re not up to your caliber. It’s vital because you get that feeling of camaraderie, and it pushes you to be better. That’s how I feel even now, playing with these guys and getting my chops back. I haven’t played like this, at this level, in 20 years.

But for me, early on, getting together with the guys in Sabbat, we grew together. It’s an adventure for everyone. Get out in the big world, and gather experience. Also from the production side as well. Even if it’s a tiny laptop setup, start recording things and get some real real world experience. You’ve gotta get out there and do it. Be in people’s faces and enjoy it.