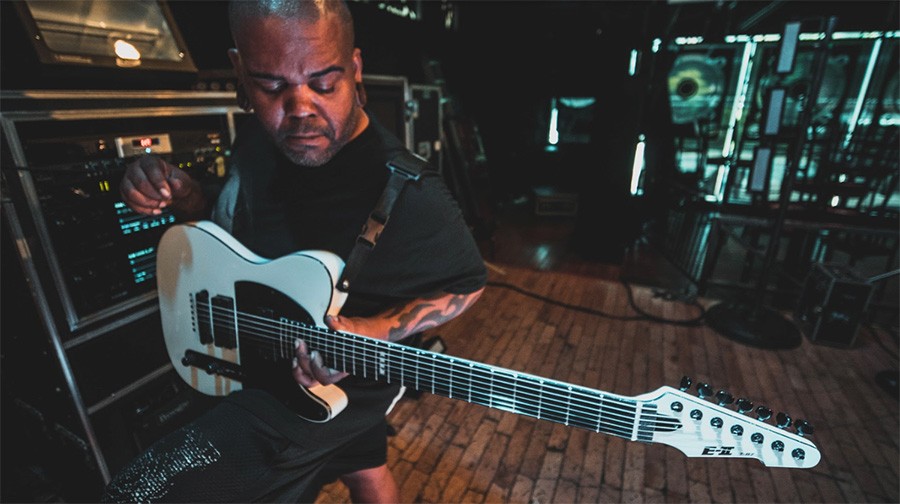 "My phone told me it was you,” was how Josh Travis of Emmure picked up for our interview. We chatted a little about the lack of privacy in the modern era before we got down to talking about his new ESP E-II T-B7 Baritone guitar.

Do you remember when you first discovered ESP?
It was so long ago that I barely remember it. What you need to know is that when I first started playing guitar, I started on seven strings right away. I never even had a 6-string.

Really? That’s pretty unusual.
I was in a store, and they had a totally sick 7-string ESP. It had the coolest paint job. I remember thinking, “That’s so cool, but you’ll never have one of those.” At the time, I was playing very low-quality guitars, because that’s all I could afford. But I still remember that guitar. I would play one of those today.

Tell us about the E-II 7-string TE model you’re playing now.
Ever since I’ve been at a level that guitar companies felt I could have custom or signature guitars, I’ve always wanted a Tele. What I really wanted was an 8-string Tele, but no one offered them.

Then one day, I randomly found a picture of the Stef Carpenter 8-string TE shape. I freaked out! The rest was history.

I got in touch with Tony at ESP, and he told me about the E-II's. I’d been playing the the Stef TE, which is such a pretty guitar that I didn’t think I wanted to change. But then, when I switched to the E-II, I was like, “This is a tank!”

What pickups are in your E-II?
I use Fishman Fluence.

What do you get from them, tone-wise and response-wise?
It’s, like, such an interesting style of a pickup. This is probably going to be a strange answer. With the Fishmans, compared to other pickups I’ve used, it still has all the aggressiveness of a high-gain pickup, but still has a level of clarity you don’t expect. With most active pickups, you generally start to lose a lot of quality in the upper register. It gets dull, and doesn’t shine through.

Let’s say you hit a low note and then a really high note. Most times, it’s going to get buried, but with the Fishman pickups, it’s going to pop out. People are going to hear those notes, so in that aspect, they actually make you play better. 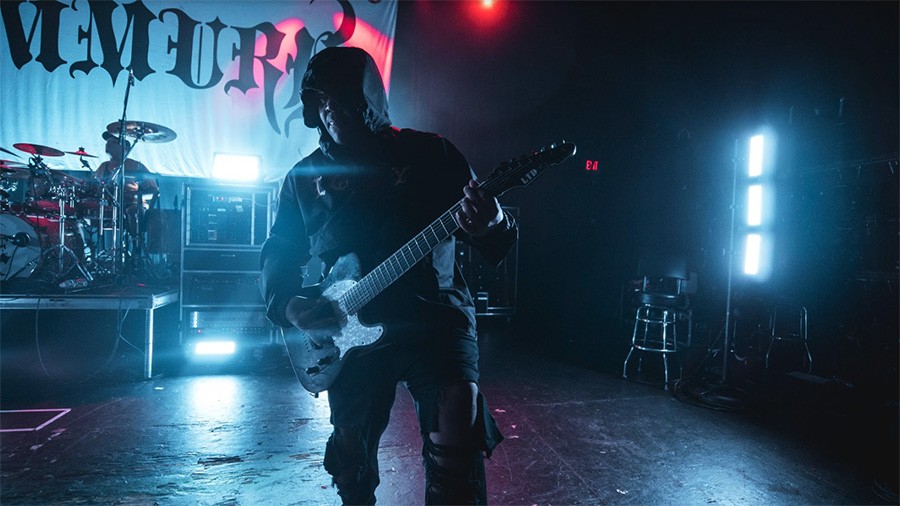 How’s the feel of the E-II T-7B? You like the neck, the overall balance?
This is also a strange answer. I probably don’t play live guitar the way you’re supposed to.

At the same time, I was wanting to get into a more quality guitar. With the Stef T-7B, there’s binding on the neck and body. The E-II was purposefully kept more “plain Jane” because chances are that something’s going to get broken, at least the way I play. I got the Stef T-7B and was like, “This is a beautiful guitar.” But so is the E-II, and it feels like I could throw it through the wall and it would still work.

You’re on the road a lot with Emmure, so being able to count on your guitar’s reliability is probably a big thing for you.
Yeah, absolutely. When you’re going from city to city with extreme weather changes, any guitar is going to require some level of adjustment. That’s the laws of physics. I noticed with my E-II, it never takes more than three minutes to correct it. It doesn’t get easier than that. 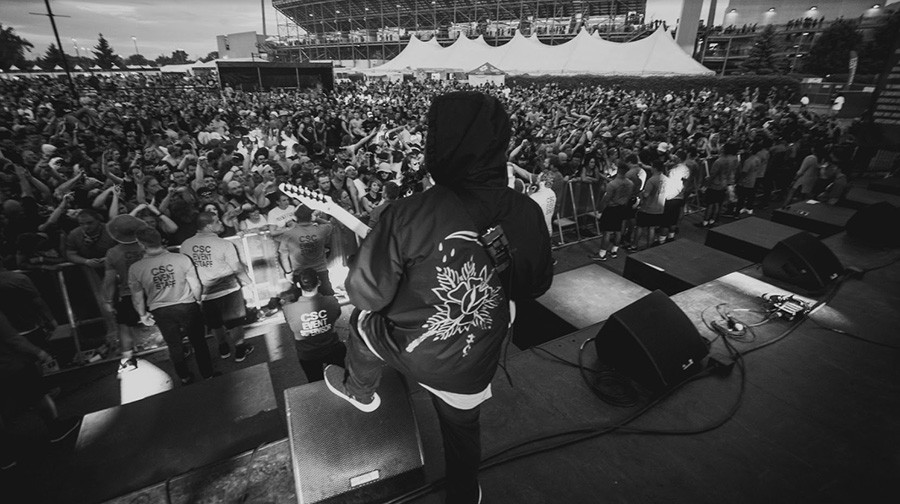 Who influenced you as a player when you were getting started?
I would say it ranges pretty far. I’m not strictly a metal type of person at all. I may be into aggressive music, but not all aggressive sounds are heavy metal.

Early on, I listened to Korn, Limp Bizkit, and Deftones. All of those bands’ first records. I think literally the first two bands I ever really heard and got into were Korn and Tool. Then I started getting into a wider spectrum that included heavier stuff like Meshuggah, Fear Factory. Things of that nature. I started honing in on what the hell these guys are doing, how they’re getting these sounds. It was like going to school for metal guitar playing with these bands. I studied hard and it imprinted. I still utilize a lot of that stuff.

You mentioned that there are some non-metal bands and artists that inspire you. Care to name some?
It’s difficult to pick just one… there are so many. For example, there’s this group called Snarky Puppy-

What? Dude, I’m literally wearing a Snarky Puppy t-shirt right now. That’s crazy!
They did this orchestra performance that I heard, and it’s like… it’s stupid how good they are! It’s borderline uncool. I hear that and I'm like, “You’re just fucking awesome!” It doesn’t make any sense to me.

Groups like that… it’s not metal but it slams harder than anything!

I don’t even know what genre to call that band.
I think they could hold on to the fusion label. They do some hairy stuff sometimes. 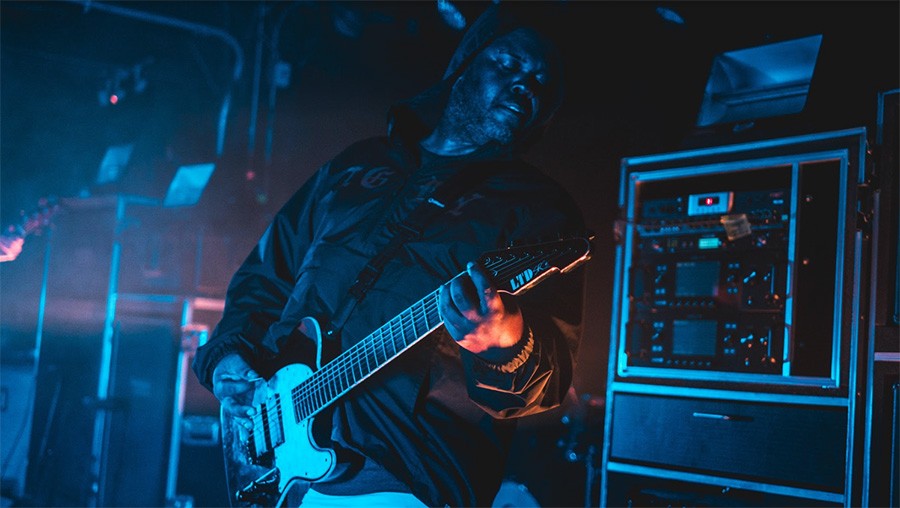 Your riffs in Emmure are really unique, and there are some sounds that I don’t hear from other bands. What goes into writing a song that has its own vibe?
Well, one thing is that when it comes time to write, I don’t listen to anything. I hole up that way, pulling from within rather than from something I’ve heard recently.

As far as the way that I write, I write 100% chromatically. If you approach it like you would a piano, you can make anything work. I toy with tensions more than anything. I take something that’s dark and dissonant in the rhythm, but for the lead section, maybe not go to the major but lean toward the positive side of darkness. I feel like that’s where the tension come in. You can do a dark chord, but you bring more life to it by adding tension to it. That’s what makes the song come alive much more.

How old were you when you started playing guitar?
I actually started on drums. The guy I was in a band with was so good at guitar, he made me want to start playing. I was maybe 20 when I switched to guitar.

Do you have any advice for players who have mastered the basics but then hit a plateau where they’re getting frustrated because they don’t feel like they’re getting any better?
That’s the hardest question ever.

There so many different things that I have done when running into roadblocks like that. One thing is taking a step back, and looking at why you’re doing what you’re doing in the first place.

People wonder, “What’s your ultimate goal as a musician?” I never had one. I never wanted to be a rock star, or a notable player. That was never a thing for me. That’s not what does it for me. But creating, going from nothing to something. That’s what really gets me going.

One thing is to go back to the stuff you like, and listen to other bands. Do whatever it takes to spark up that interest again. But then again, taking a break from it can do a lot of good. Being in a band that tours a lot, you don’t get to step away from it anymore. When I was younger, I never understood why bands could be so popular, but then it seemed like they weren’t doing anything for awhile. It’s like, “Dude, they’ve been on the road for nine straight months!”

Some people seem to never need a break, but you can only wear down for so long before you need a break. I would never take my full attention away from creating music, but you don’t need to keep pushing yourself to the point that it’s a deterrent for you. So I’m not saying to stop… just slow down as needed.

In terms of getting better, the main thing I’d say is that I’m not a shredder. I’m a riffer. I like to play with rhythm. Sometimes people are like, “You should come over and rip a solo on our record.” No! I don’t even know how to do that! Sometimes, I’ve thought, “I need to get better at this.” But no, I guess, I don’t.

Nice one! Mad respect for you brother!

Thanks for the continued inspiration Josh! Cant wait to hear whatever new music you put out in the future <3