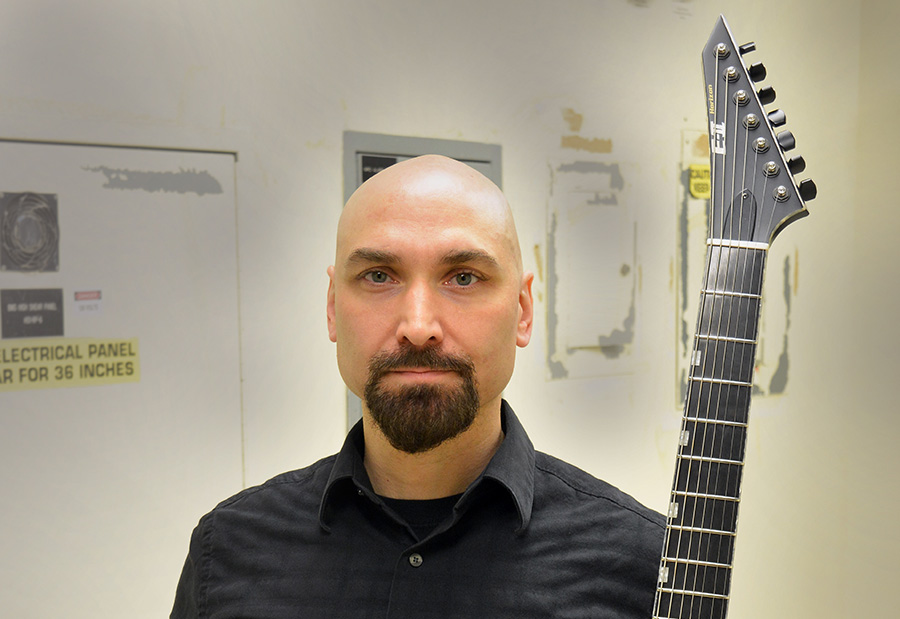 Originally hailing from Yonkers, NY, Immolation has gained legendary status in the world of metal over the last 30 years. Guitarist Robert Vigna has been there right from the start. Respected not only for his intensity but for the innovative complexity of his riffs and solos, Bob joined the ESP artist roster in 2015.

Bob, welcome to the ESP family! Do you recall when you first discovered ESP and what originally drew you to our guitars?
Thanks Jeff! Yeah, I knew that Metallica, Slayer and a bunch of other bands had been using ESP. I’ve always been aware of ESP, as ESP has always been out there in the metal scene. It’s one of those key guitar brands you just know. And although I have tried them out here and there throughout the years, I never actually owned one.

However it wasn’t until Chris Cannella (ESP artist relations manager) and I happened to meet up together when Immolation played at Slipknot’s “Knotfest” a couple years back that I got the opportunity to own an ESP! He was like, “Look man, you gotta try these.” At the time I was working with our friend’s band Gospel of the Witches, and needed a 7-string. Chris hooked it up, and I have to say I was impressed right from the minute I started using it!

Yeah, Chris can be very convincing. So what ESP model are you playing now?
I’m playing the Arrow with Immolation. It was a new guitar ESP was coming out with at the time that I found really interesting. It’s awesome. It has a great feel to the neck, the body feels great, everything is solid. I liked it so much that I was telling our new guitarist Alex about it, and he ended up getting the V for this tour.

What do you like about the Arrow, specifically?
It’s the best guitar I’ve ever played. I’m really impressed with action, and the feel of the neck compared to other guitars I’ve had. The weight is comfortable, the size is comfortable. I just love playing this guitar every night!

What pickups are in your Arrow?
The stock EMG 81 and 85. And really, the stock guitars are phenomenal. There's no need to do anything to it. I use different amps between touring here with our own equipment as well as using a touring company’s equipment in Europe on tour and at Summer festivals, et cetera. I can get a great sound no matter what amp I’m using.

How are your guitars working for you in a live setting?
Oh, they’re great. They stay in tune every night. It’s a great live guitar for a tour. In Immolation, we move around a lot. The stuff we play has a lot going on, so it’s very important to have a solid instrument.

What’s the main factor for you in choosing a new guitar?
For me, it’s the way it works with how I’m operating live, for the stage. Playing live, I like the V-type shape. You want to feel comfortable playing live, and don’t want worry about trying to keep up with your guitar. You want it to be right there for you with each move, balanced, following your pace. That way, you’re thinking about the performance, not about the guitar. Alex said the same thing. He’s loving it! He too was totally blown away by his V and swears by it now!

Reliability must be really important to you, then.
Yes, that’s definitely a main thing when you’re going out on the road for months on end, throughout the year. I’ve been using the same guitar for all the shows this past year, and we also have a busy year ahead of us now too, and I know I can count on it! Through all the shows, flights, and road trips, the Arrow has stayed as good as new!

It truly is a road ready guitar. I’ve had no issues. I have a spare, but I don’t use it. There’s been no need. So yes, reliability is very important. On tour you are always traveling through different conditions. The guitar has to hold up to being banged around in trailers on the highways and in airplane cargo bays for long hours, being in extreme heat, and then in extreme cold. That is something that can really take its toll on your instrument. You can’t have the neck move on you, or the electronics fail when you are on the road. With the Arrow, the neck stays in place, and the guitar stays in tune. It hasn’t failed me yet!

What guitar players did you listen to when you were starting out?
So many guitarists! I was into everything in the early days. At first it was Van Halen and AC/DC. That developed into harder music like Iron Maiden and Judas Priest, and then that evolved into Metallica, Slayer, Possessed, and others.

Being on the road now, we’re touring with Max and Iggor Cavalera. They were a huge influence on me around the time of their Morbid Visions album. That became a big influence on the direction of the music I wanted to do. Being on tour with them now is super cool.

Really, with everything you do, everything you hear, you get influenced. You can take that and develop it into your own style, once you have those tools to work with. I’m not a trained musician; I work by what sounds right. I just go for it and do whatever feels right for the music.

Immolation uses a lot of great dissonance and you get into complex rhythms. Do you consciously try and push boundaries as a musician and as a songwriter?
We have written 100 songs so far now. It’s our music, so it’s always going to sound like Immolation. It’s identifiable, which is good. But we also don’t want to do the same thing over and over. So we’re always trying to approach the writing a little differently. We keep the roots of where we came from, but expand on that. We like to keep that dark, menacing feel in the music that we have always had from the beginning and just try to keep making it better as we go. Seeing where we can take it.

In writing the parts, certain riffs lend themselves to have an overlaying melody, like an extra rhythm. It makes things more dynamic, and opens it up a little bit. It adds a nice feel, and takes it to a different place.

So, it’s not a completely conscious decision. It’s whatever comes naturally, and it all depends on what’s happening. We try to make every song the best it can be, and then look at the whole record. It’s almost like the whole album is one big song. As you are creating it you get a feel for what is needed along the way, what’s missing and what will make it feel complete.

Every record of ours has its own vibe, though, once complete. The ten albums we have all sound like Immolation, but are unique in their own way as we write the music at that time. We don’t have a vault of saved up songs, et cetera. So each record really reflects where we were at, at that time.

When we’re getting ready to make a new album, we write everything just a few months before starting the recording sessions. Whatever we're feeling at that point is what you’re hearing. We’re usually still writing stuff a couple weeks before going into the studio.  We also write all of the lyrics in the studio. Ross and I sit down together and brainstorm our concepts and ideas until it all works and feel right. Everything’s in the moment. So when its complete, it’s always cool for us to hear it, because it’s like we’re hearing it for the first time.

The new album Atonement just came out. What do people have to look forward to on this album?
This is definitely one of the darkest and best sounding records we have created. The songs are like mini epics. A lot of powerful stuff, but very catchy and to the point. There are all the signature Immolation elements in there... the fast, intense parts, the slow moody parts, a lot of militant feel and just an overall dark, heavy as hell vibe! We think the fans are going to love it!

Hasn’t it been a little while since you toured the US?
Yes, too long! The last tour we did in the US was the Decibel Magazine Tour with Cannibal Corpse & Napalm Death in 2013. We did do a couple of shows here and there since then, but not a lot in the states for the last record unfortunately. We plan to make up for that this year, big time!

So as you can imagine we are super excited to be out now with the Cavalera brothers, total metal legends! And getting out there on the road when the new record is coming out is also a great feeling. We’re playing a bunch of new songs on the tour. A good half of our set is new shit. And it’s been going over really well! So we are very excited!

We did, however, get to do a lot of cool stuff last year outside the US, playing places we hadn’t been before like New Zealand, Australia, and Iceland. But like I mentioned, this year we plan to be out in the US quite a bit, as well as Europe, and we can’t wait!

People sometimes are surprised to find out that metal players tend to have pretty broad tastes in music.
Oh, yeah. I’m into so much different stuff, from Depeche Mode, Muse and Tori Amos to bands like Rammstein, Behemoth, and Cannibal Corpse. Music should reflect the mood you’re in at the moment. I listen to a lot more non-metal these days than I did early on. Most of my influences as a songwriter are from non-metal music. That’s where a lot of the overlaying stuff came from. It’s from moodier music that I’d listen to. Taking that and then incorporating it in a metal sense is always interesting. I’ve gotten that inspiration from classical stuff I’ve heard, random stuff, like movie soundtracks, et cetera. Music where there are so many different instruments working together as a whole to create that single mood or vibe. That’s always been very impressive to me.

Thanks for the suggestion.

Awesome. Congrats to Robert and ESP.