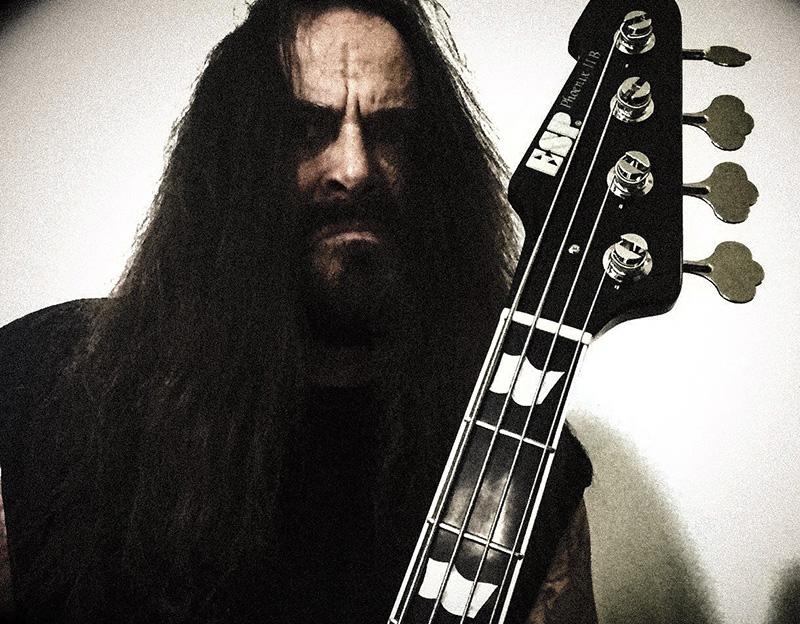 In an era when a band that’s been around for five years are called “veterans”, ESP player Glen Benton’s band Deicide truly merits the description, having been rocking and shocking metal fans since 1987. Never a stranger to controversy, Deicide’s overlapping riffs and complex song structure paved the way for the death metal genre. Since their debut album in 1990, Deicide has released eleven studio albums, one live album, two compilation albums and two live DVDs, and are still going strong in 2015.

As a new member of the our artist family, Glen provided some insight on what it’s like to be on Team ESP.

Do you remember when you first discovered ESP?

GB: Quite awhile back, man. A lot of guys I run into have ESPs, so I was always checking them about. I was always impressed by them. Even the LTDs that I’ve played have had the quality of some other companies’ custom shop models! I’ve been wanting to make a change in my bass for quite awhile, and my agent was like, “I’m friends with Chris at ESP,” so I said “Put me in touch!”

What does ESP represent to you?

GB: To me, to be with ESP is to be in the company of metal. ESP represents metal.

What ESP basses are you playing?

GB: Right now, I have a Phoenix and a Stream. I’m also currently waiting for a custom shop EX Chris ordered for me which is my favorite body style.

Tell us about your first experiences with your new ESP basses.

GB: Just yesterday I used them at practice. The way I would describe it to you is that it's felt like I've been riding around in a Ford Escort for the last ten years, and going from that to suddenly driving a Porsche. It's that much of a difference in quality. The moment I picked up the Stream, the feel was as good as that of sitting in a nice expensive sports car, instead of your mom’s busted up old Chevy Vega.

A lot of people we talk to say that their ESP bass is simply more comfortable than other basses they’ve played.

GB: The feeling when you put it in your hands… let me say that I’m no small person and I have large hands. I put it on and it felt like it fit. Like putting on shoes that don’t fit, versus putting on comfortable shoes. It wasn’t at all headstock heavy. I was instantly able to play it without any issues, and didn't have to modify my playing style to accommodate it and I knew that second it was going to work. There was not one thing that interfered with my playing.

How are your new basses working out for you in terms of tone?

GB: The basses have EMG pickups. I’d been using Bartolinis for a long time, but I used to use EMG. I plugged in, and immediately I had the beef and tone I’d been lacking for the longest time. I wasn’t even using a preamp; just went straight into the amp. With the Stream, I can also have the option of being able to use the extra boost, and shape my tone even more.

We hear you’re going to be going out on tour soon.

GB: Yeah, doing the Metal Alliance tour. I’m totally looking forward to it. I sometimes used to hate touring. Now, the older I am, the more I love it. The more touring, the better.

As a touring musician, is reliability an important factor in choosing a bass?

GB: I’m not gonna name names of other companies, but I’ll say this: reliability is the most important thing by far. Cosmetics and all that… everything else is secondary to being reliable. When I’m getting onstage and I plug in, it has to do its job. I’ve been in situations where I did shows without a guitar in my hands because it failed. When you’re having bridges breaking, tuning keys breaking, electronics not working, it’s unacceptable. I believe that with ESP, I don't have to worry about that anymore.

You’ve been around for a long time, and you’ve experienced a lot of changes in music over the past 25 years. What kind of advice would you give to a young metal player who’s just starting on that path today?

GB: We live in a different era. There’s pretty much no such thing as making money in record sales. The way to do it now is independently. Social media is the new record company. Even if you do sign with a label, you need to ask yourself how long is that record company going to be in business? Will they get bought by a larger label? My advice is that you can now do it all yourself. Establish yourself through local shows. Market it yourself, sell it yourself. That’s how I’d do it if I was getting started today.

Hail to Glen and Deicide