Slayer freakin rules, I don’t like the new album to much except for the song “piano wire”. “Repentless” is ok, but could be better, the video is cool.  I guess I just miss Jeff.  Gary was the best selection they could make, but no one will replace Jeff.  I’m so much of a Slayer fan I’ve got a ESP guitar specially tuned in Eb for all of the old Slayer tunes, you know, seasons, dead skin mask, blood red, read between the lies, angel of death, war ensemble, skeletons of society, divine intervention, dittohead are a few that I like to play. 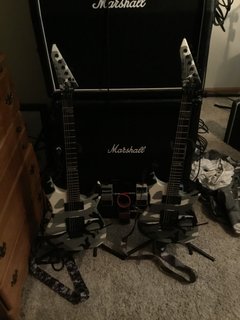 Can you believe that someone had the balls to walk into my house and steal the number 2 guitar shown in the pic above, when someone was home, straight outta my room???  I couldn't believe, neither could the police.  I mean one of my roommates was home, and he didn't hear nothing.  I have insurance on all my equipment, just for this reason, but the sentimental value, and each guitar is unique, with it's own strengths.  Now I gotta break in a new one, and set it up, at least i'll get to experience that new factory smell when I open up the case for the first time!! Oh yeah SLAYER RULZ!!!!!!!!