So far my impressions of ESP's new E-II line (which is more than likely the replacement for the LTD Elite line or a rename) are nothing short of awesome. First off, bringing back the M-I. Very awesome minimalist's guitar. Second, the FRX. The addition of this model is spectacular (it would be even more so if they had a string-through TOM bridge model). Third and final, the E-II artists. While only having three signature artists at the moment (Jesse Liu and Doris Yeh of Chthonic and Elias Viljanen of Sonata Artica), the models released by them are truly wicked.

My thoughts exactly, the FRX looks sick and I will be saving up for that beast. Im curious to hear how the emg 89s sound. My only gripe is with the new horizon headstock, it reminds me of a tear drop.... which isnt metal!!!

I agree they don't look as "metal" as some of the other shapes, but there are Plenty of metal guys out there with teardrops,

I also whished the FRX would come with a tom bridge model. but the E-II mystique also looks very cool!!!

Yeah man. That thing is wicked.

Got my Mystique today via Fedex, very awesome guitar!!! 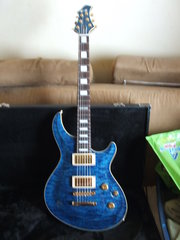 very jelaous!!!  The red one is my personal favourite.  Do you like the neck pickup or are you thinking about changing that one and if so why?

I haven't tried any E-IIs yet but I did play the LTD Elite M-II and it was an awesome guitar. I played through a Marshall JVM and it sounded great.

Not played anyo of them but honestly i dont see any icnetives to buy one.

Why am i paying a huge price NOT to have ESP on the headstock?! its stupid.

And i have owned a fair few highest end LTDs and jsut got  my ESP NT-II and there  really isnt a huge differnce in terms of playability.

In my Eyes you can only bridge price between them, not quality.

My friend was recording and he starts his recording using his LTD EC 1000, but then he has bought an ESP Eclipse ll and continue the recording with that guitar. He was like you saying: "is the same there are not big difference and bla bla bla", but when he keep attention to the first recordings with the LTD and the second one with the ESP, even using EMGs, he told me that there are a big difference in the sound. The ESP has more definition and balance, while the LTD was more treble oriented. He re-record the previous songs with his new axe!.

Sometimes a cheap guitar and an expensive one does not have a huge difference under the eye, but cheap guitars are pure cosmetic (I have had very bad experiences after sanding some of them), and the expensive ones uses better materials, and that is what you are paying!.

I'm about to buy ESP guitar, but I'm a bit confused with E-II.

In online shop I found this image http://jam.ua/files/images/items/ESP%20E-II_Horizon_NT-II_RDB.jpg

but can not find such version on the espguitars site.

Does anyone know if it's original one or not?

I found a review of what looks like this guitar, and it has the same model number. I just saw your post so I am probably too late. Link follows:

There are actually a few reviews of this guitar on youtube, to give you an idea. Most seem to like the guitar. The guitar played in the review does not sound anything like mine, it seems rather thick and muddy. I think it might be the vid, maybe the amp. Mine is clear, distinct, with great sustain. But that's just my opinion.

I have the E-II Horizon-III in the same color, Reindeer Blue. Different body, largely same features. I am very pleased with mine. Also have an H1001FM and an EC.

E-II FRX in Black See Through set to hit my doorstep mid-next week.  First time with ESP Guitars and I am really excited to become part of the family.  I actually returned one of the new Gibson Flying V History guitars to get the FRX.  I am heavily into metal and the V History just didnt fit well with the drop tuned style I love.  I came across the FRX and got that little kid in a candy store excited feeling we all know when we find the right one.  Watching all the videos of the Japan factory make me feel really comfortable with my choice to order in the ESP.  The luthiers are jamming out to metal building metal guitars need they say more?  I'll write up a review after a while with the guitar.

I'm about to buy ESP guitar, but I'm a bit confused with E-II.

In online shop I found this image

but can not find such version on the espguitars site.

Does anyone know if it's original one or not?

According to ESP, the E-II line is the direct replacement for the ESP Standard Series, leaving the ESP moniker for only the custom shop, USA models, and Original Series of guitars.

Which e-ii have you played ?