I have this older ESP 400 Series guitar and was wondering if anyone can give me more information about when it was made, if there was a name to this model and possible value.  Thanks. 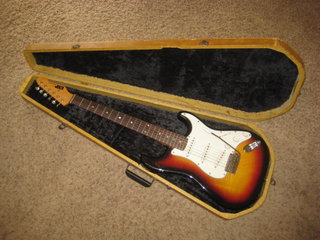 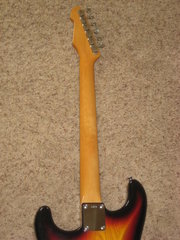 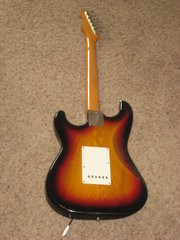 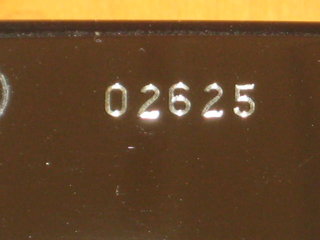 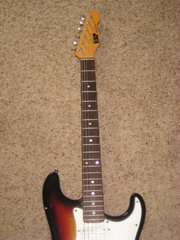 I don't have any idea

hmmmm.... email esp with those exact photos and they will tell you

IT WAS CALLED THE ST 400 MODEL, MADE AROUND 1984 - 1990 AFTER THAT IT WAS REPLACED BY THE ST TRADITIONAL MODEL AND THEN THE VINTAGE PLUS ST,  A LOT OF THESE CAME OUT OF THE 48TH STEET SHOP AND ARE MARKED 48TH ON THE HEEL OF THE NECK AND INSIDE THE NECK POCKET,  THEY SOMETIMES HAVE THE DATE. WRITTEN ON THERE ALSO.

Sometimes I get excited that I know the anwser to someones question and I forget to turn off the caps lock key.   Most things I do at work are

typed up in all caps.

Yes around the second part of '80 till around  1990 many ESP with thestrat  headstock  were made or assembled with Japanese parts,  from the ESP Custom Shop in New York on the 48th street. I have one of this:

But all the Custom Shop (was really an ESP Custom Shop but in that years was not in use to write), guitar informations was written on the neck plate with serial number: 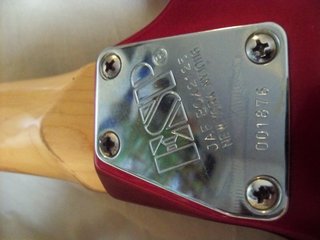 There are no more images of that Shop I have founded these: 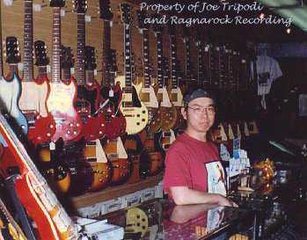 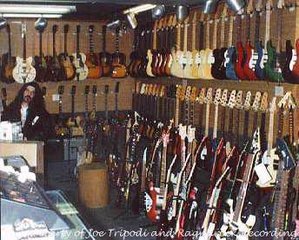 I appreciate the information - that's why I'm here. Not to have my time wasted by someone over the way he writes it.

Thanks for siding with me but I have no problem with 6 string, They have a great inventory and at least 4 Esp guitars I am GASing over right now.  They would probably have anwsered the question If I had not beat them to it. 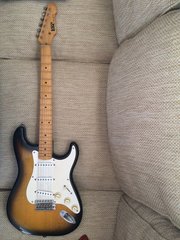 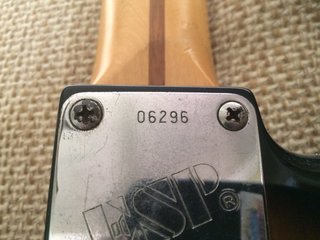 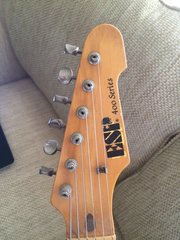 I have one I bought in 1987.  serial number 06296.  it is a really sweet guitar.  I've played a lot of strats, and the tone on this is still amazing with the original pickups.  I believe the 400's were made in Japan.  At least this one was.

Those were the first import series producen in japan.

Also you can find some strats and other models build from parts on the 48st custom shop (the parts are MIJ, selected an assembled en USA)

I've searched the internet but was unable to find any really good data regarding the ESP 400 Series, so I searched thru my extensive collection of old Guitar Player & Guitar World magazines.
Here's what I found.

There were 2 batches: The 400 Series, and The Traditional Series.
ESP (Electric Sound Products) 400 Series guitars were manufactured in Japan during the 1980’s.
The 400 Series were named for their suggested list price: $400.00.
They made excellent copies of vintage Stratocasters, Telecasters, Jazz, and Precision basses.

The earlier batch of 6-string (400 Series) guitars had:
Black & gold ESP decal on the headstock.
21 frets.
ESP stamped on the saddles.
The headstock had a ‘rounder’ profile than the later models.

Telecasters were: T453 (blonde, maple board), T463 (3-tone sunburst w/rosewood board). Precision basses: P457 (2-tone, maple) and P464 (3-tone, rosewood): and the J464 Jazz bass (3-tone, rosewood.). The S454 and T453 had one-piece ‘V’-shaped necks. The later Traditional Series had ‘U’-shaped necks. Other standard (no extra charge), appropriate-vintage ‘Custom Colors’ offered were: Black, Olympic White, Lake Placid Blue, Surf Green, Candy Apple Red, etc., and J464’s in Metallic blue or red w/matching headstocks. Prices around 1986 were $495.00 for guitars and $550.00 for basses.
Double-bound ‘Tele Custom’ bodies cost an extra $75.00. They all featured period hardware, vintage replica bridges and saddles. They feel, play, and sound like the real things, and aside from the headstock shape, the only noticeable difference from a vintage Fender was an extra fret, 22 instead of 21. Locking tremolos, locking nuts, and Humbucking pickups were neither standard, nor optional, on the 400 Series models.

Here's my batch....shown in the order I'd purchased them. 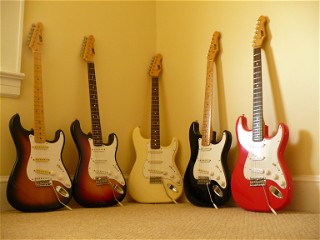 And here's a 'mutt' guitar.
Neck is original ESP 400 I'd bought on Ebay years ago.
Amazingly, there is zero wear on this neck!
As if it had never been attached to a guitar.
Body (candy apple red) is from Rondo Music.
Everything else is from Guitar Fetish.
This axe is as light as a feather and plays like a dream. 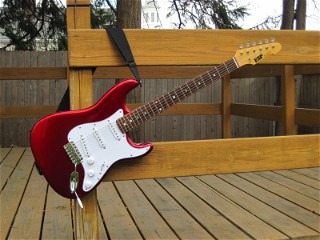 Any idear about the pre 400 series . Only has series on the head stock by esp . One for sale but it’s 30 years old and looks brand new so a bit sceptical

Each guitar series have its own features and it is the main thing that help us to identify the guitars. Guitar and violin are my faourite music instruments and I use it in my leisure time to get relief from the busy work schedule at research paper writing service reviews company.

Hm, do you recognize any characters? Many films are similar (esp in the romantic comedy). The only advice I can Click Essay give you is go to mysoju.com and go to the Chinese/Taiwanese movies section and see if you can find it.

Thanks for sharing wonderful information. It is really helpful.

wow, that is so great looking)