Post your favorite amp and favorite guitar you own.

I know you guys have some awesome gear! Show it off! 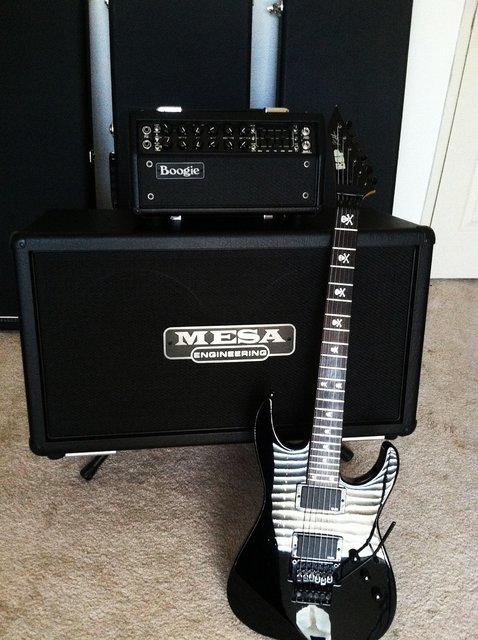 I really like my KH2 too. But the ouija is amazing too.

Thank you. I really like the Kemper, I use it when I want to record stuff because I kinda suck at mic'ing amps. But when I play in the room i use the actual amps. I'm sure you can get nice sounds out of Kemper as well live, but I haven't fiddled much with that yet.

Awesome Metaddict! When you get a picture of it post it up here.

My rig currently consists of my bc rich mk1-kkw-tf running straight into a Marshall mg10cd. 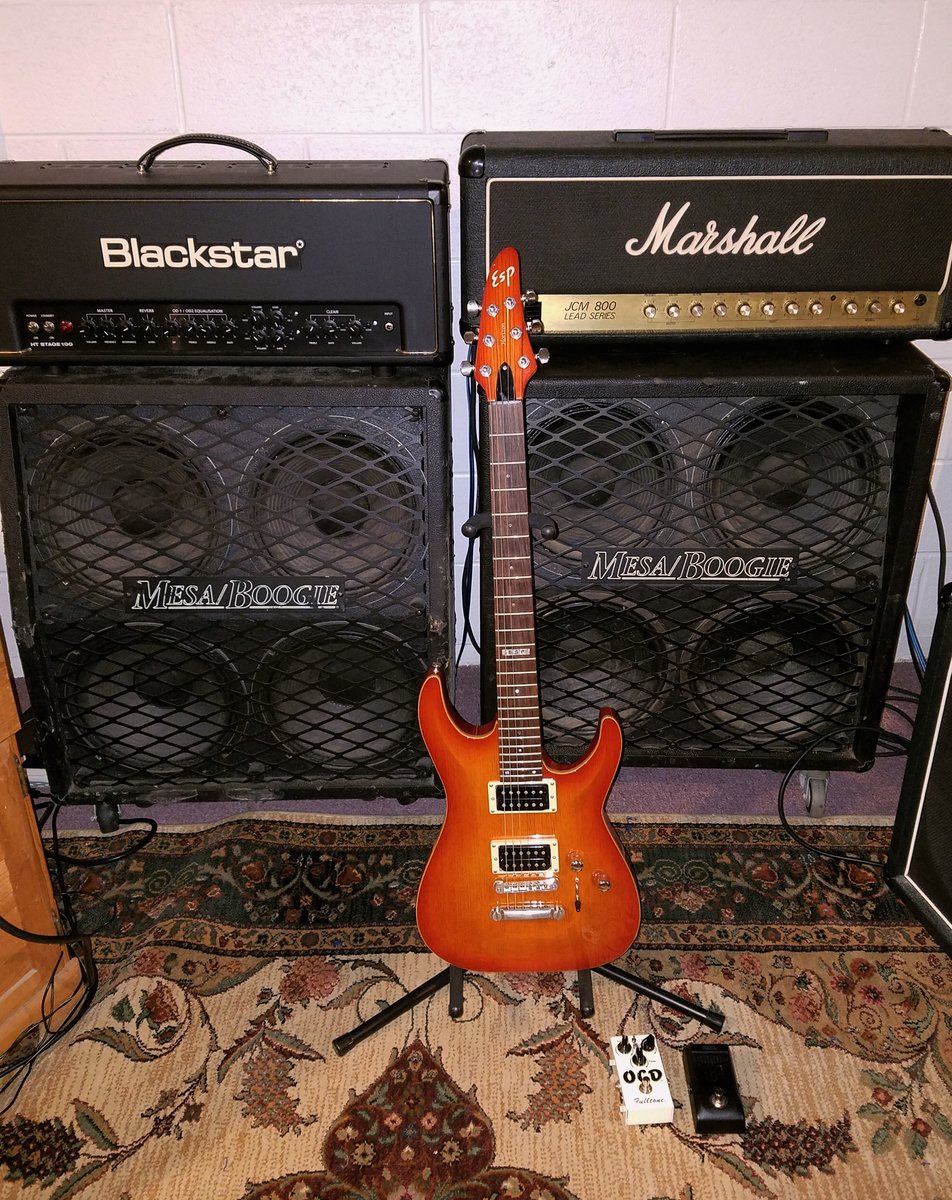 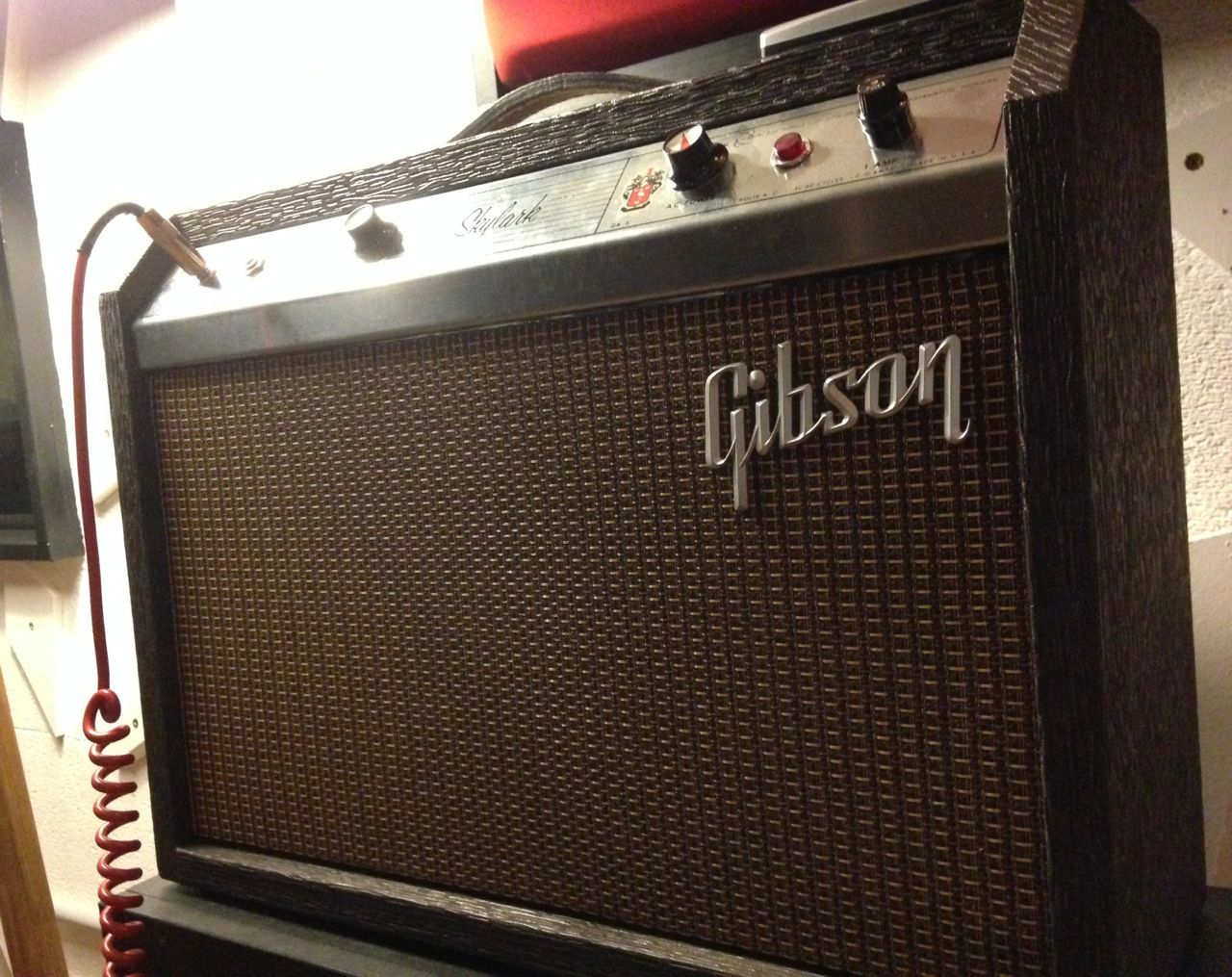 One Flight Up Recording Studios Sydney

For sheer tone the guitar I always go back to is my Jackson Surfcaster. It cuts through like a tele on speed. Love it. Cool guitar Luke, I have never seen one before.

Got myself a mesa mark iv

Here is the latest photo of my rig:

How do you like compared to the diezels and engl?

How do you like compared to the diezels and engl?

This one is a tough question to answer, especially considering that I'm quite new to the mesa. I think it is quite different than the ENGL and the Diezel, however, I also feel that they would match great when played together. Mesa has definitely less low-end when compared to Diezels and the Savage and it has less gain. But not in a bad way. Firstly, I think it has enough gain to begin with and also the EQ adjustments are very sensitive, so Im sure there are many tones that I haven't found yet. I can describe the Mesa tone as a very percussive feeling which I really like. It can have very strong treble but again not in a disturbing way. I also tried using an Empress paraEQ with it, which adds a whole lot of more options. What I managed to get out of the Mesa is mainly old Metallica tones (which I was aiming for anyway) so I can describe it best that way. But I know Lamb of God used Mark IV's as well so I am sure it can move into the modern metal zone as well. Overall, the amp has many many different sounds and settings. I definitely love the mesa. It can do things much differently than other amps.

Awesome explorer. Is that ESP MX 220 on the left?

For sheer tone the guitar I always go back to is my Jackson Surfcaster. It cuts through like a tele on speed. Love it.

Is that the 12 string version?

I love ALL my KH guitars and it's very hard to pick just one.

But if I have to I would say my KH-20 is my favourite guitar and I love my new-to-me Mesa Dual Recto. 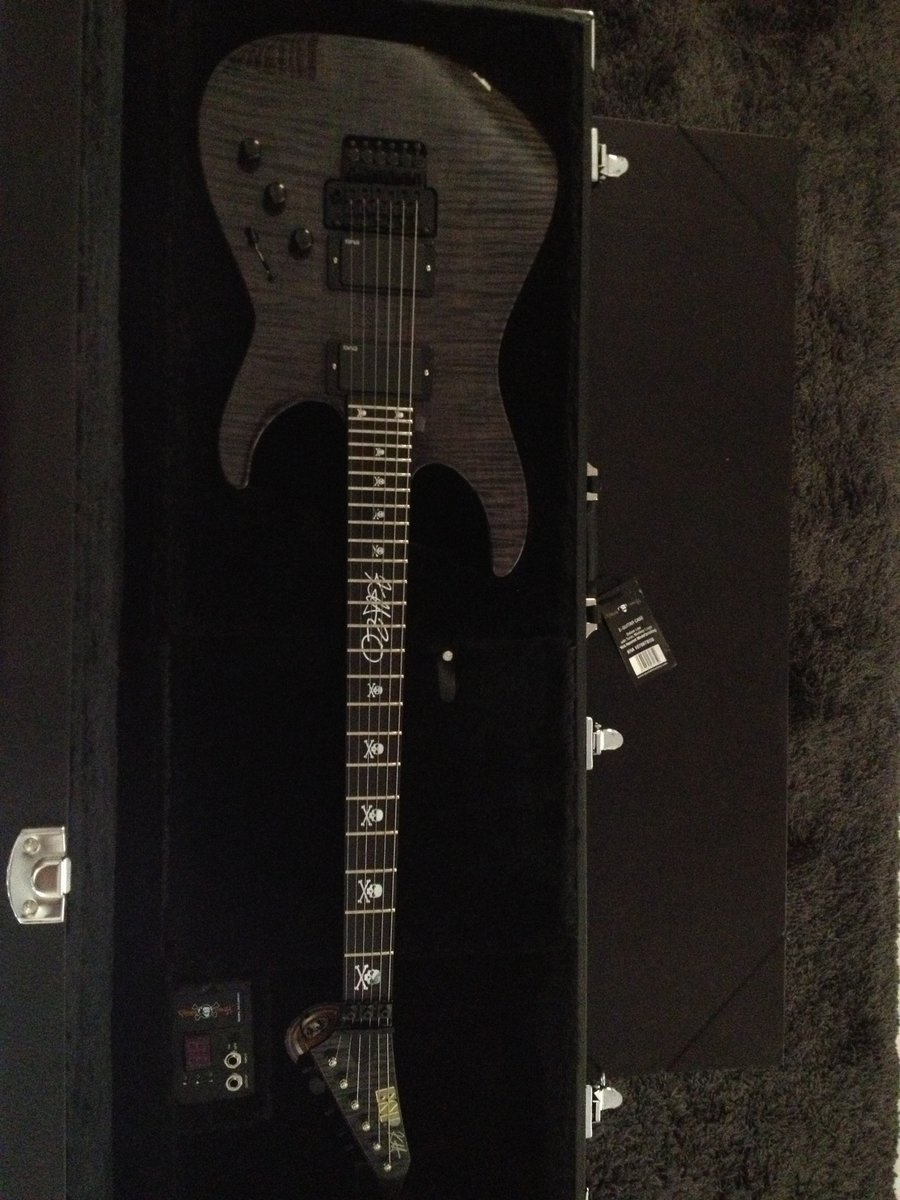 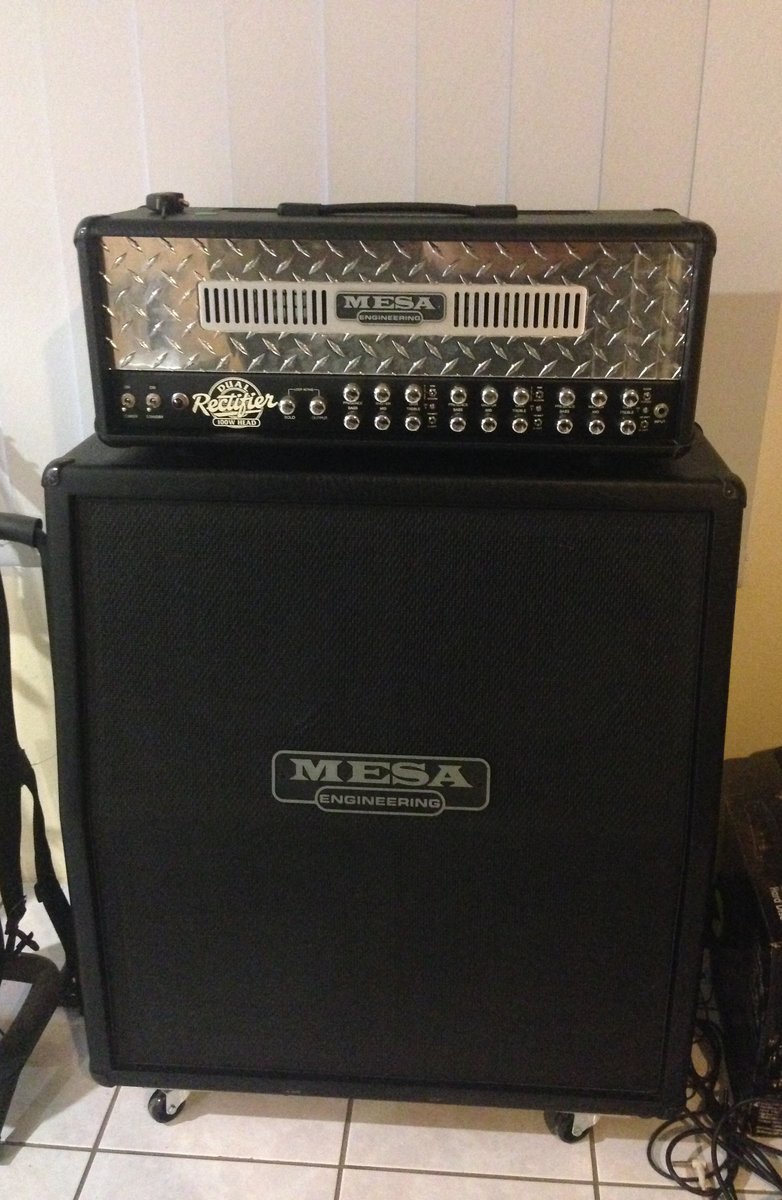 That KH-20 is a good looking guitar.

Definitely, I just need to take better pics of mine in particular. lol.

I have been thinking about getting the Gibson Hammett Signature V  or a KH-1 if I could find one.

I own the KH1 and I reckon it's an awesome guitar to look at, but I don't like playing it at all. lol

I looked at, played and considered buying a Gibson Hammett V many years ago.

Again, awesome guitar to look at but I just don't like the feel of V shaped guitars so I never purchased the Gibson Hammett V.

The only reason I purchased my KH1 was to have it to complete my KH collection of guitars, otherwise I would have never bought one. 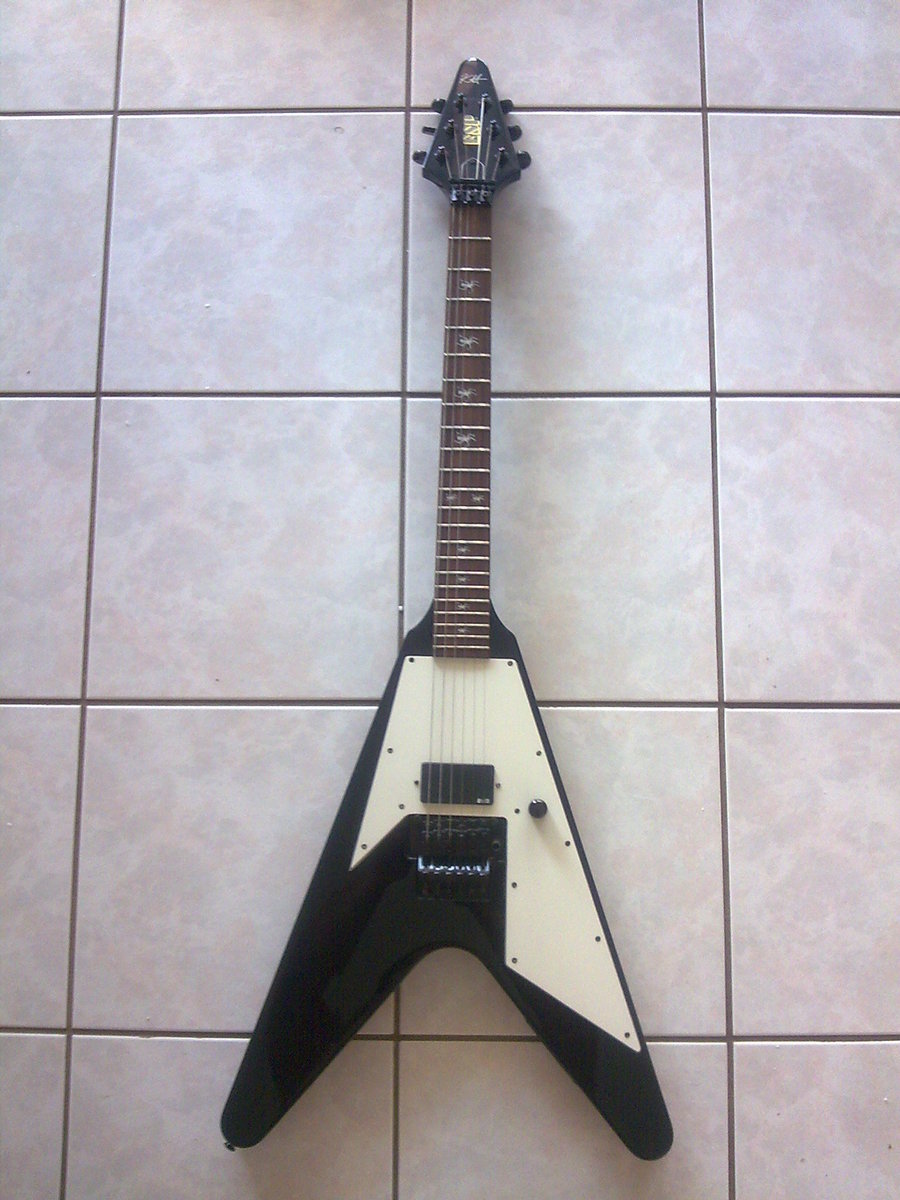 Yeah you are probably right, I have sold off all of the Gibson Vs I have owened, I just don't like the play of them as compaired to the Exlporer or KV. They do look good though.

Cool man, I love them but don't like playing them. Sounds like you love them also and did play them, but not as much as your other guitars.

Thanks man, I need to hurry up and take some good pics of my guitars again.

That is the only pic I have of my KH-20 when it arrived, used my iPhone and it's an average pic.

I can't wait to take some nice pics using my DSLR. That guitar is amazing in person.