It's a legit 2005 ESP Horizon FR-1. No idea what the price would be, it would depend on where in the world you are.

Thank you very much!

I'm about to buy a Vintage Plus strat and I believe it looks like the real deal. However, I'm curious about the model since it's not exactly like the ones I can find in the 2008 catalog. It's not distressed and it has Sperzel locking tuners and not the Gotoh Magnum Lock. It should be a 2008 according to the serial number. Did ESP make Vintage Plus in non-distressed finish with Sperzel tuners in 2008? 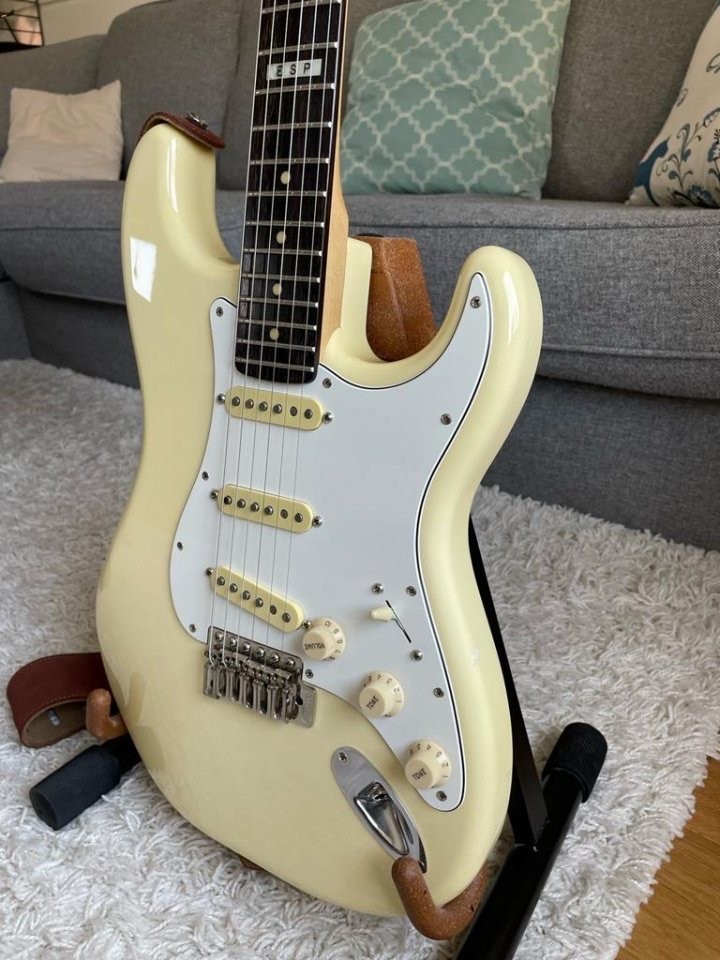 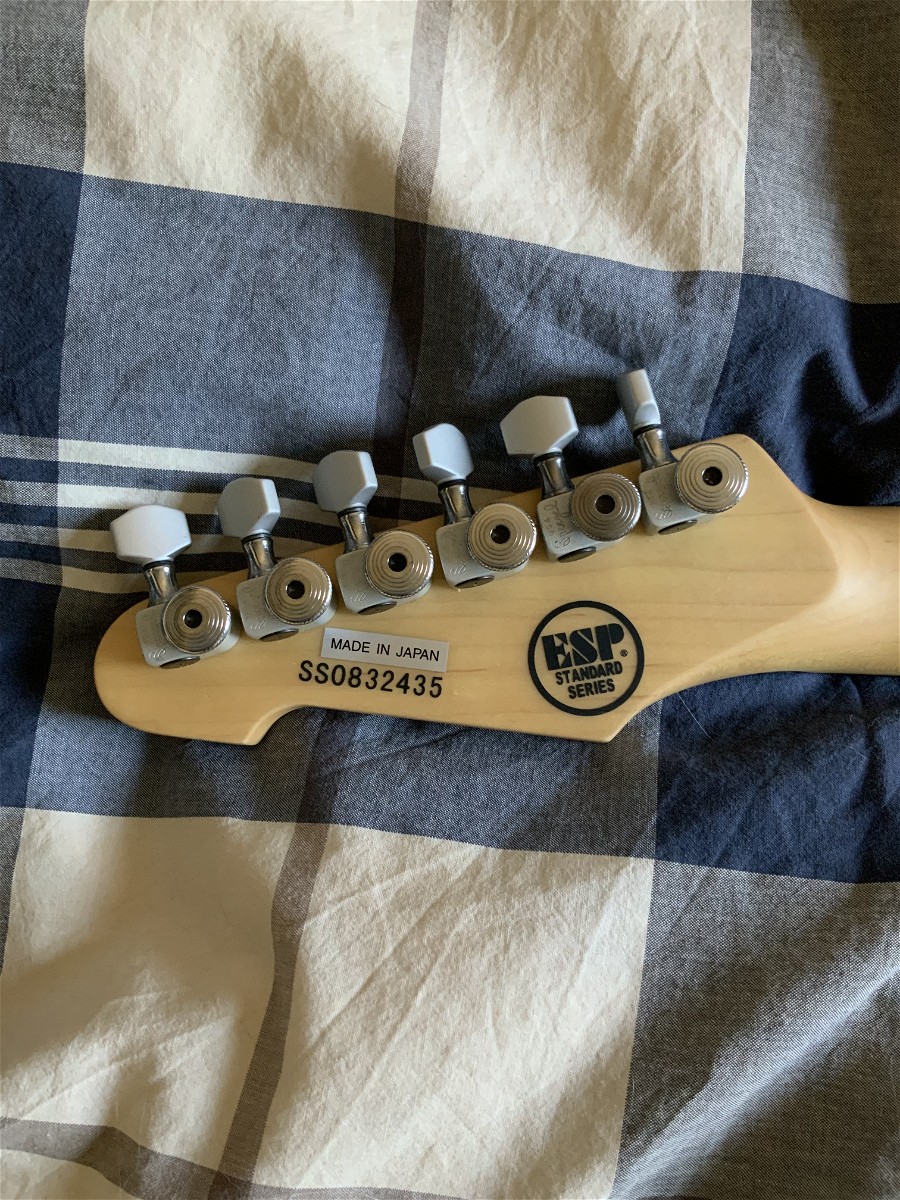 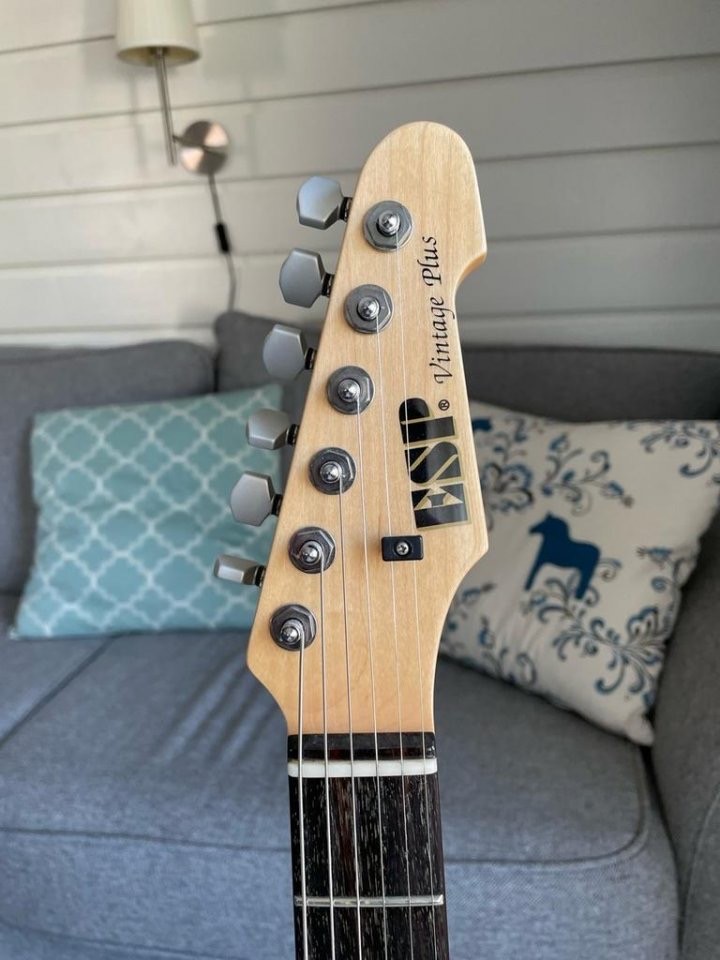 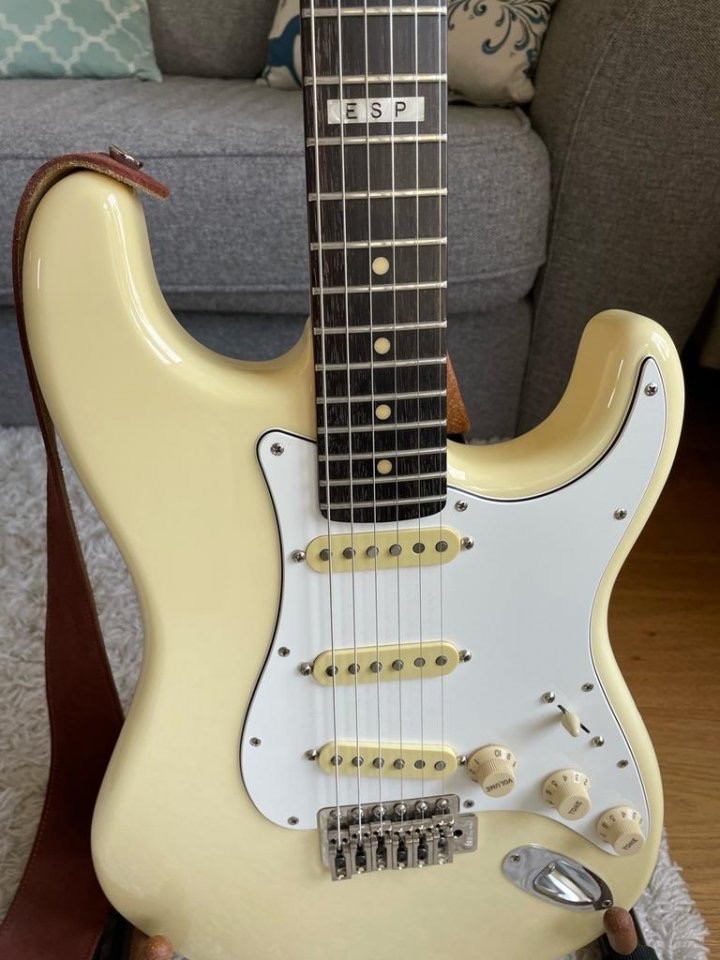 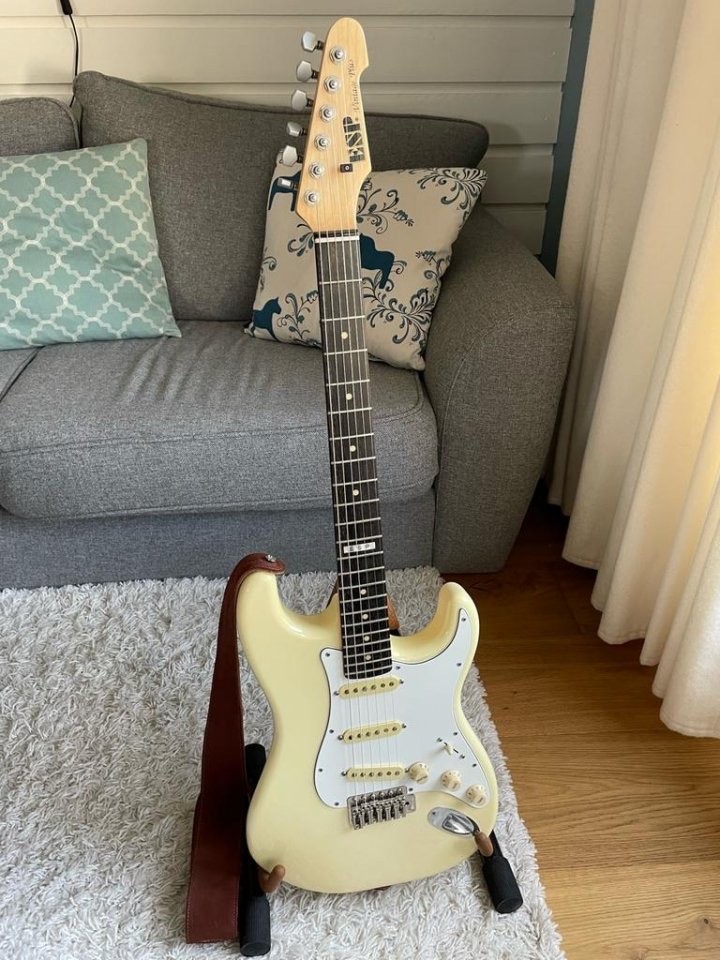 Sorry to bother you again! But the owner of the Horizon did not answer my offer yet and in the meantime I found another guitar (which I like better actually), does it look ok? 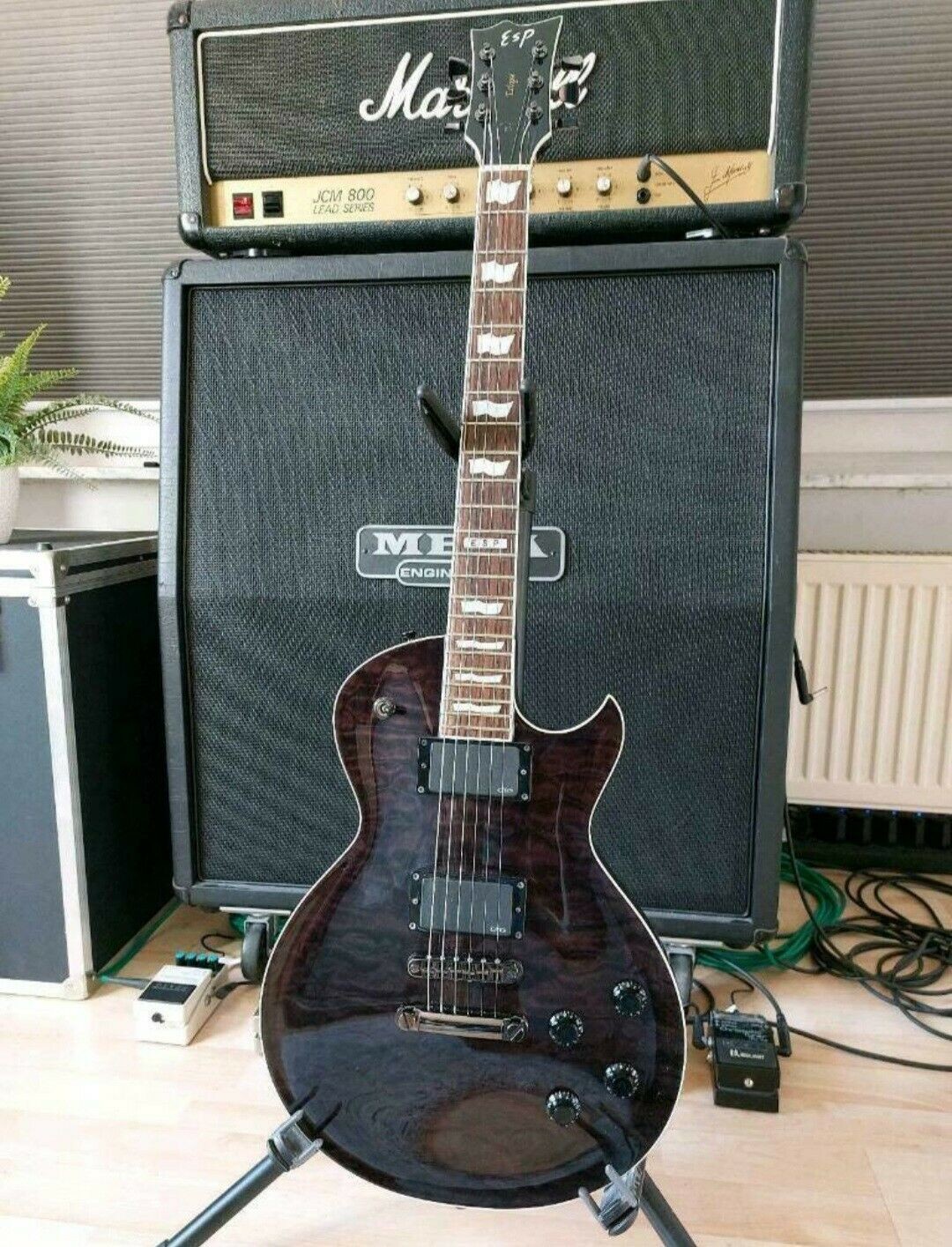 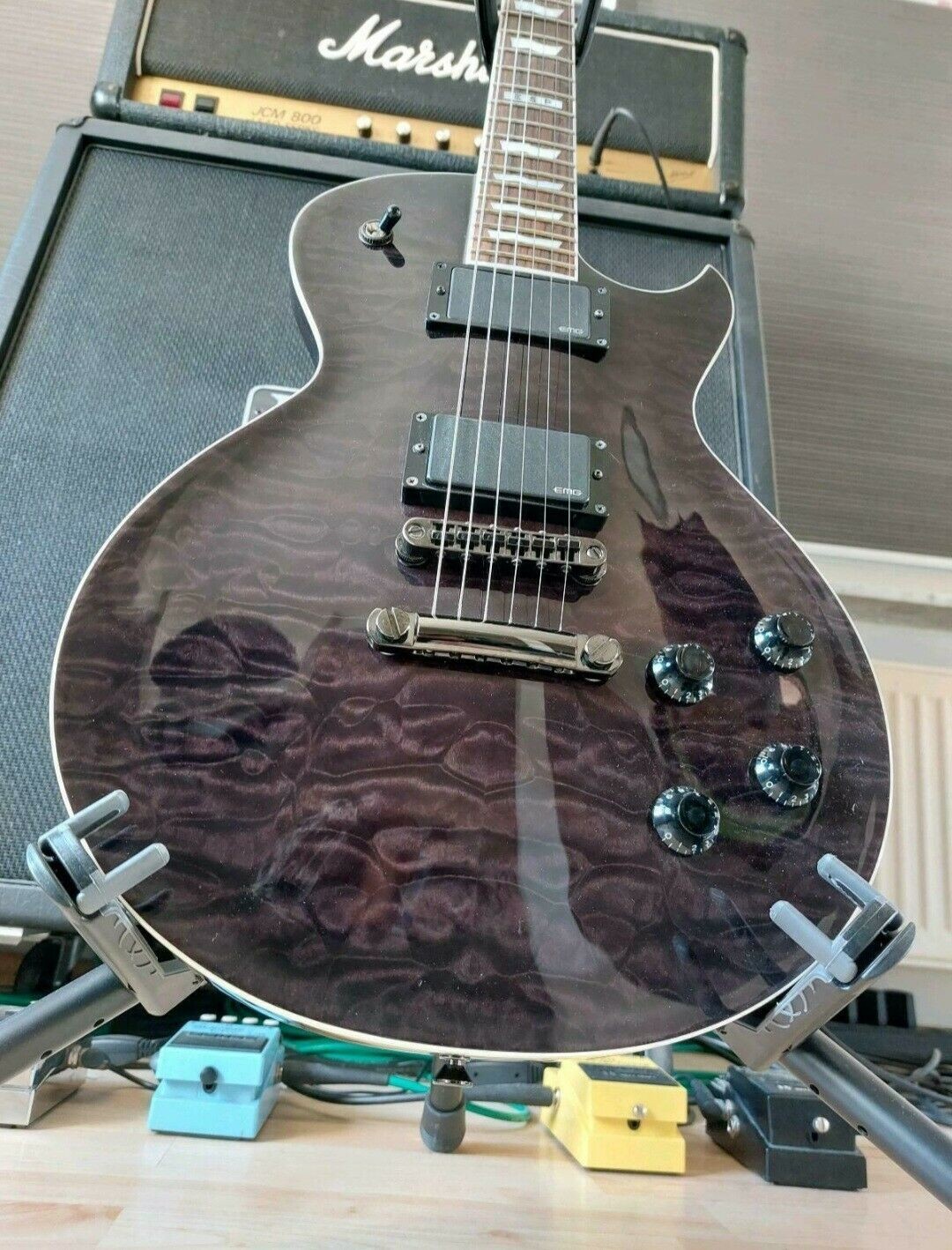 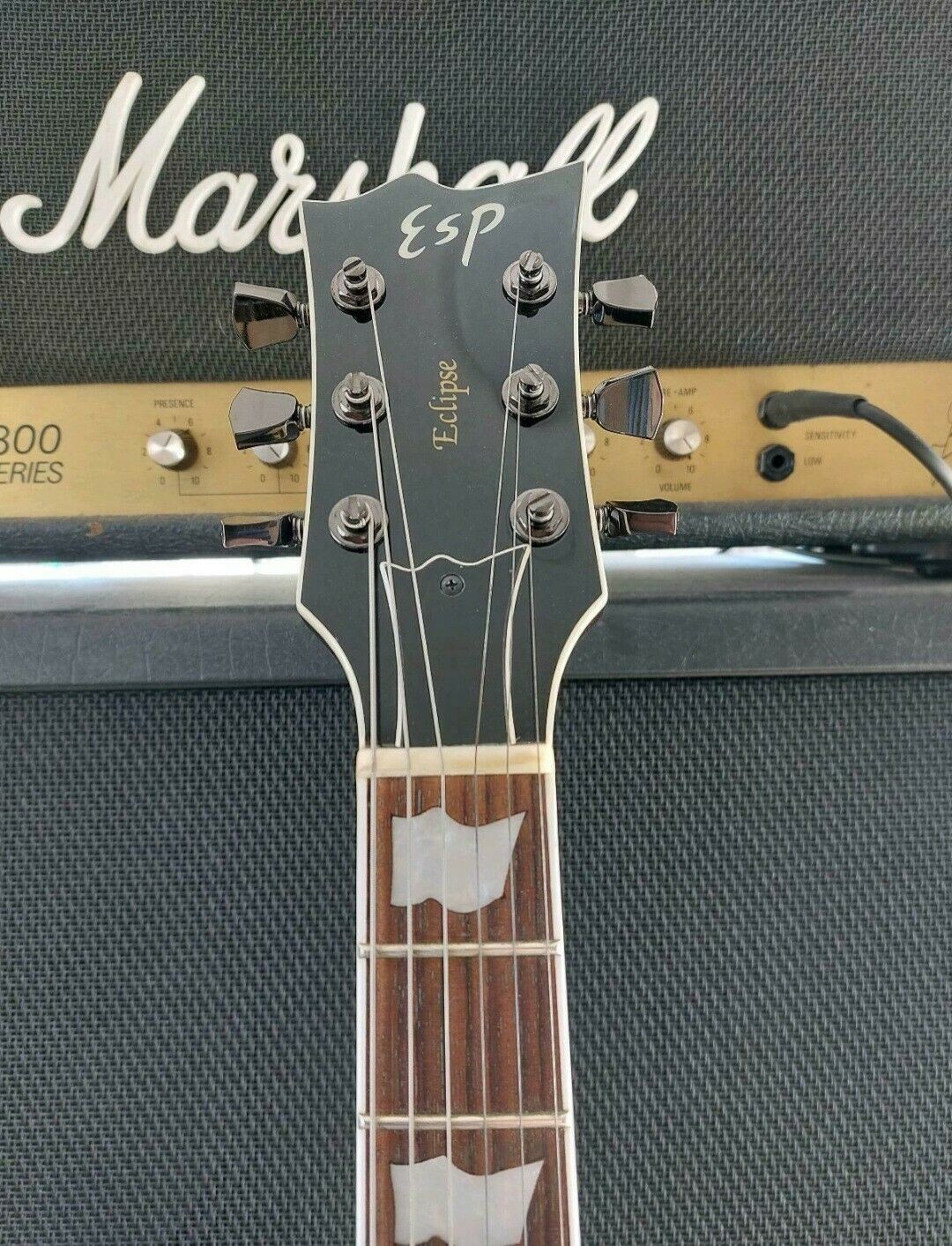 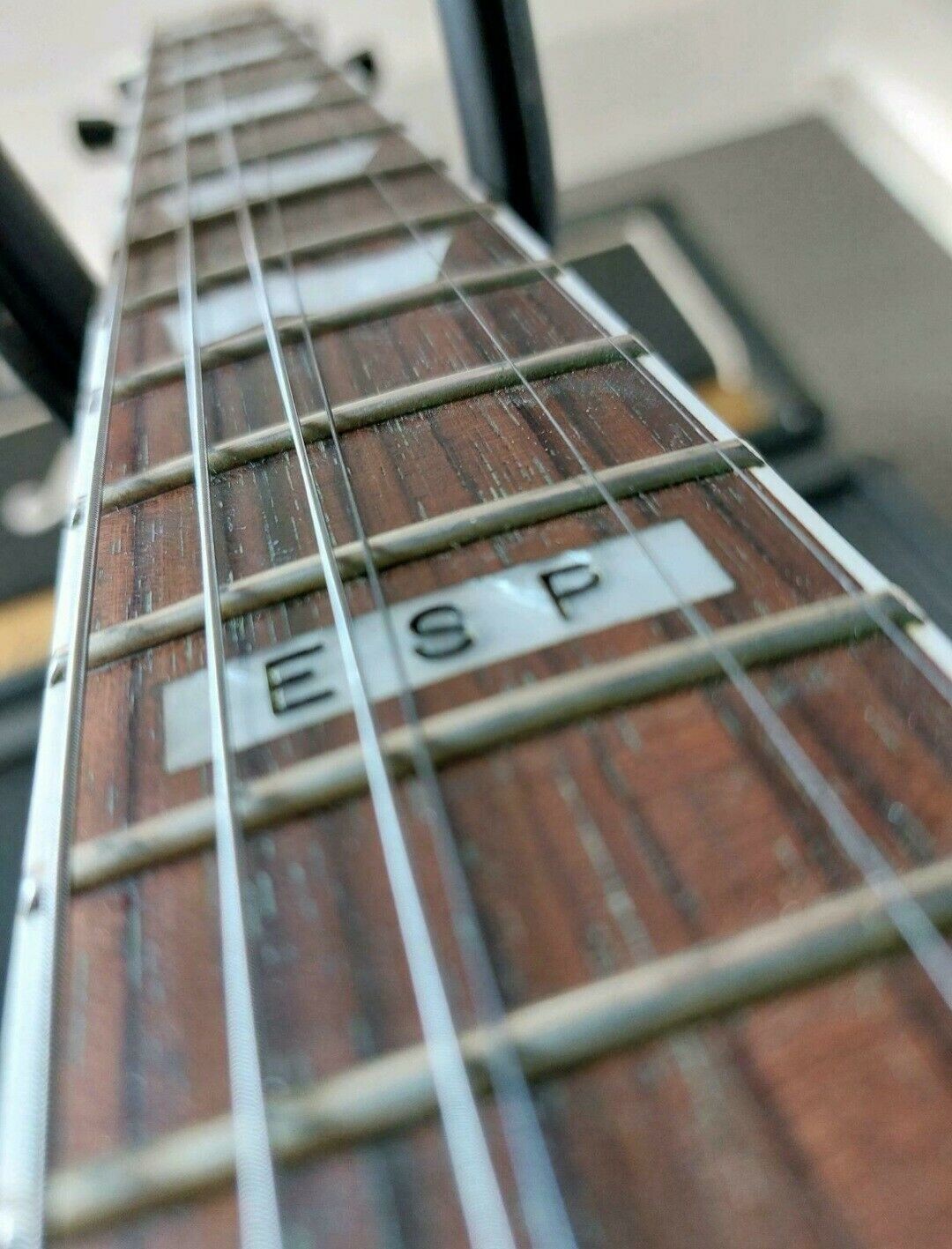 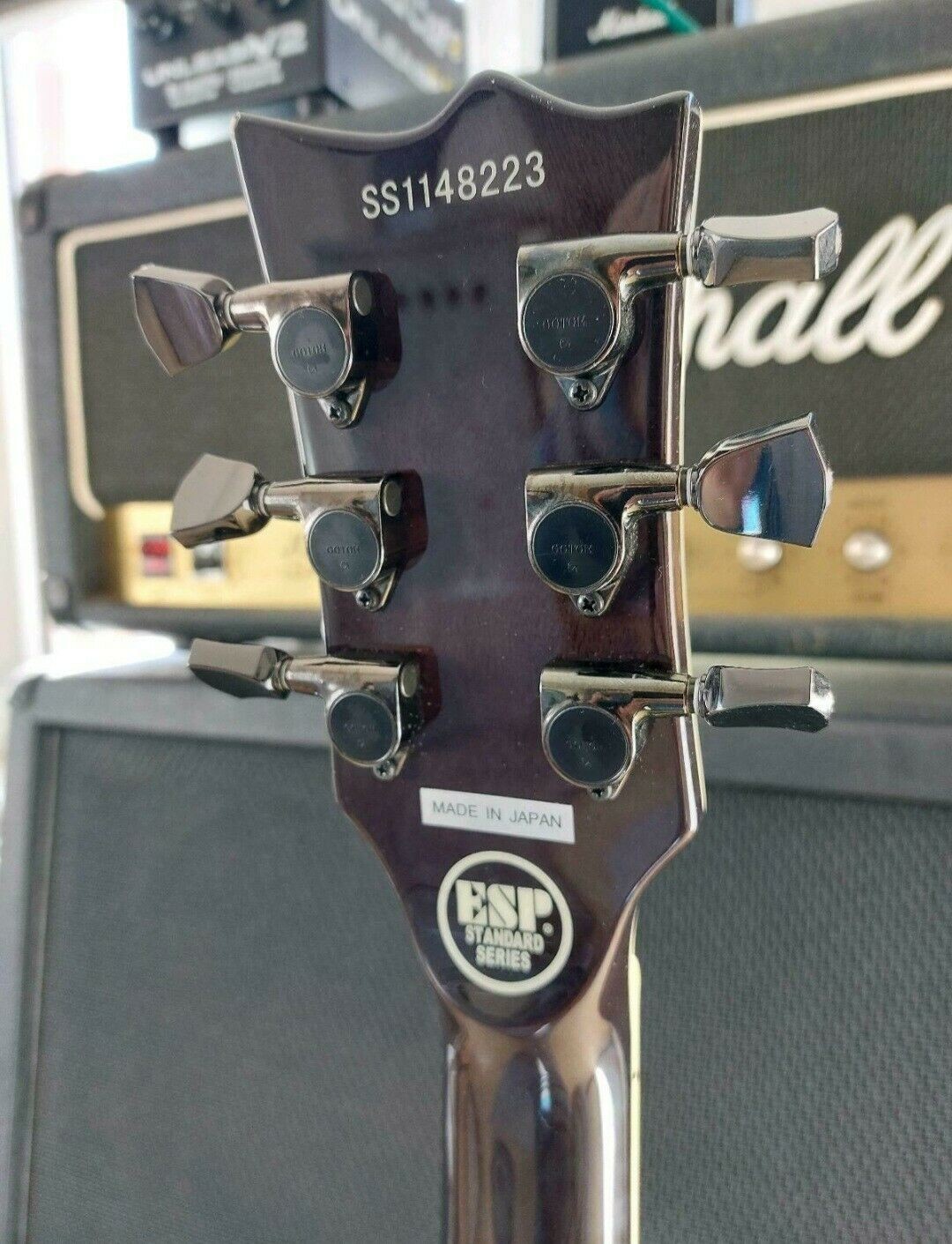 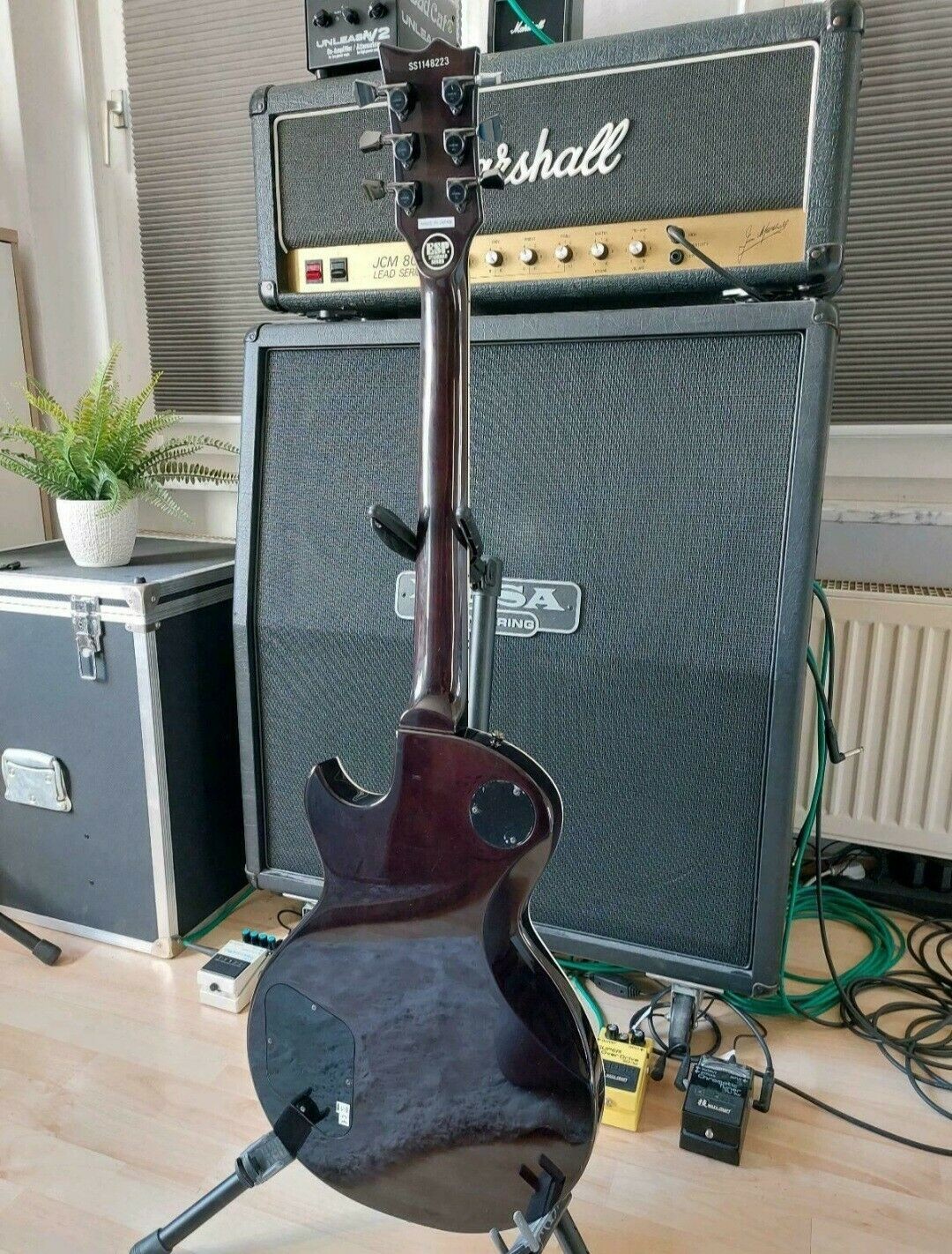 This guitar is amazing! Are ESP guitars worth the money? - The ESP Guitar Company

Peter, it is a legit 2008 Vintage Plus. The 2008 catalog shows it as an aged model, but all of the specs will be the same. I wouldn't worry that the catalog only shows aged models for the year. 2008 Catalog

Thank you for your reply! Another thing that got me wondering is the neck joint. It´s not the smoother angled joint that Vintage Plus usually has. Have you seen these guitars with a regular neck joint?

Thank you again and sorry for the trouble, this was on ebay and unfortunately I was outbided :( Maybe I will have better luck next time.

That stinks. If memory serves, I got mine for around $860 in 2016. It's pretty beaten up and was by far the dirtiest guitar I've ever touched. I got it from a seller in South Africa and had it shipped to the US.

Well good news after all, the Horizon is mine, just bought it on reverb. My first ESP, looking forward to get it, thanks again Pushead! I hope i'll  also get an Eclipse one day

Hi All. Thanks for your great work here. I've been looking for an ESP M-II CTM (FR, black) for several months now in Australia, with no luck. A dealer has said I can order one but they are quoting a 9 month wait, and I have read some horror stories of people waiting 15 months. I have accepted that I'll probably have to go overseas and have found this one linked below. I was hoping for an opinion on authenticity. It is obviously a real store in Indonesia, so seems unlikely they would have a fake represented as new guitar (note they have other ESPs for sale). But the thing that is concerning me is the gap between the trem and control cavity covers on the back. I've looked at a lot of photos of M-IIs recently. The two covers are normally more or less touching. The most recent photos of the M-II CTM FR on the ESP Japan website show a slight gap. But nothing like this one. And I'm assuming they've changed the Made in Japan stickers - older versions have a different type. The other thing is it doesn't appear to have the right bevel on the edge of the headstock where the tuners are mounted. It doesn't look quite right to me, but that may just be the angle of the photos and the tuner keys seem to stick out the right distance. I don't like the new logo on the volute (much prefer the old circle version), but I believe it's correct for recent production.

Many thanks for your thoughts.

I think the other thing about that M-II that worried me was the pickups - I thought by 2021 they were putting in the EMG 66 and 57 models without pickup surrounds, instead of the 81 / 85 combination. I'm happier with the 81/85 EMGs, but just wanted to confirm the guitar is the real deal.

In an ideal world, I'd get an earlier version with the block logo on the 12th fret, chrome hardware and no cutaway on the lower horn (circa 2005 - 2012 sort of era) but they seem impossible to find second hand. I will change the hardware over to chrome in due course if I buy a newer model.

Hey Diogenes. The guitar in the link looks legit to me. I don't have any info on when or why they swap between the 66/57 and 81/85 combo.

Thanks very much for the prompt response, Pushead. Much appreciated. I will talk to them to check out their shipping & insurance arrangements. 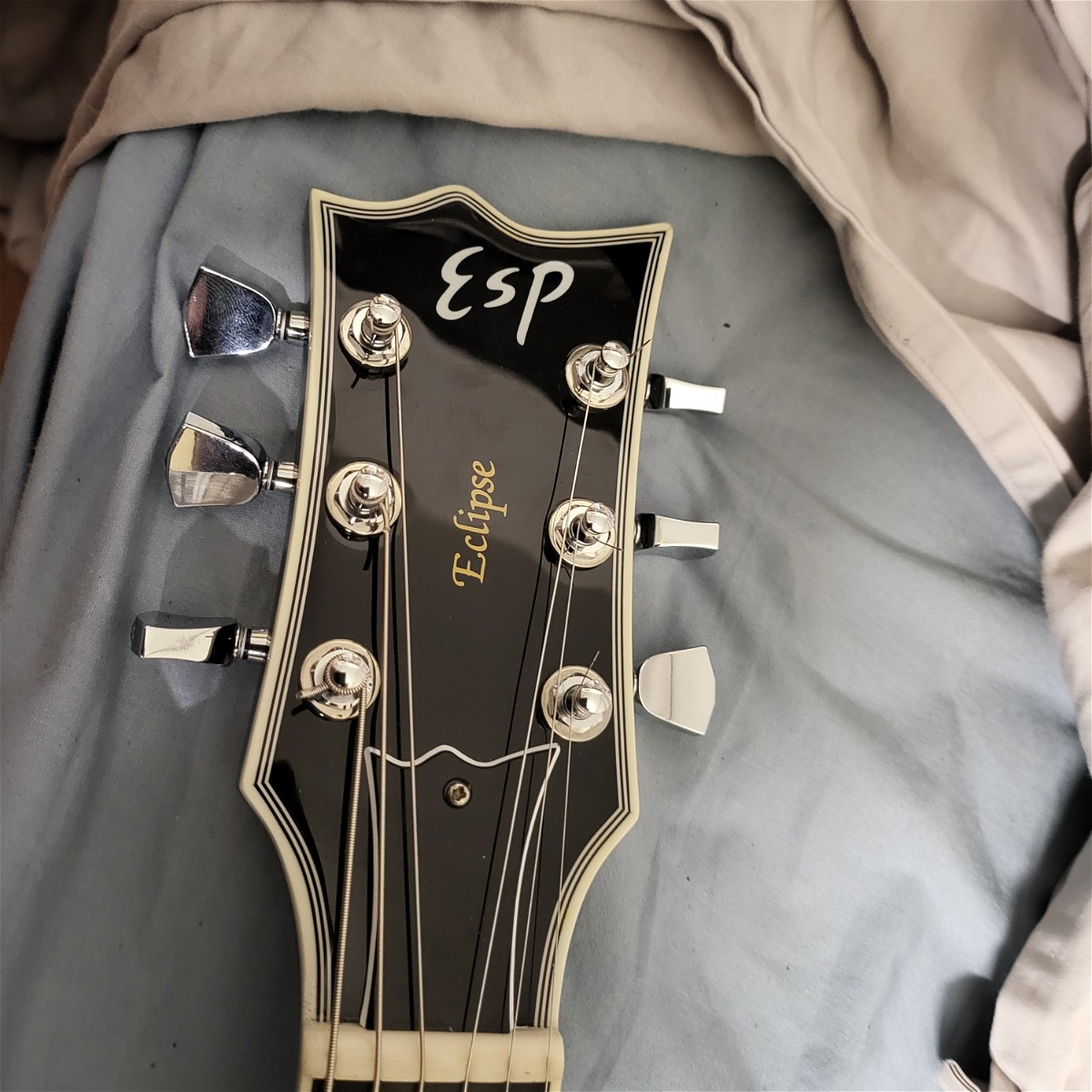 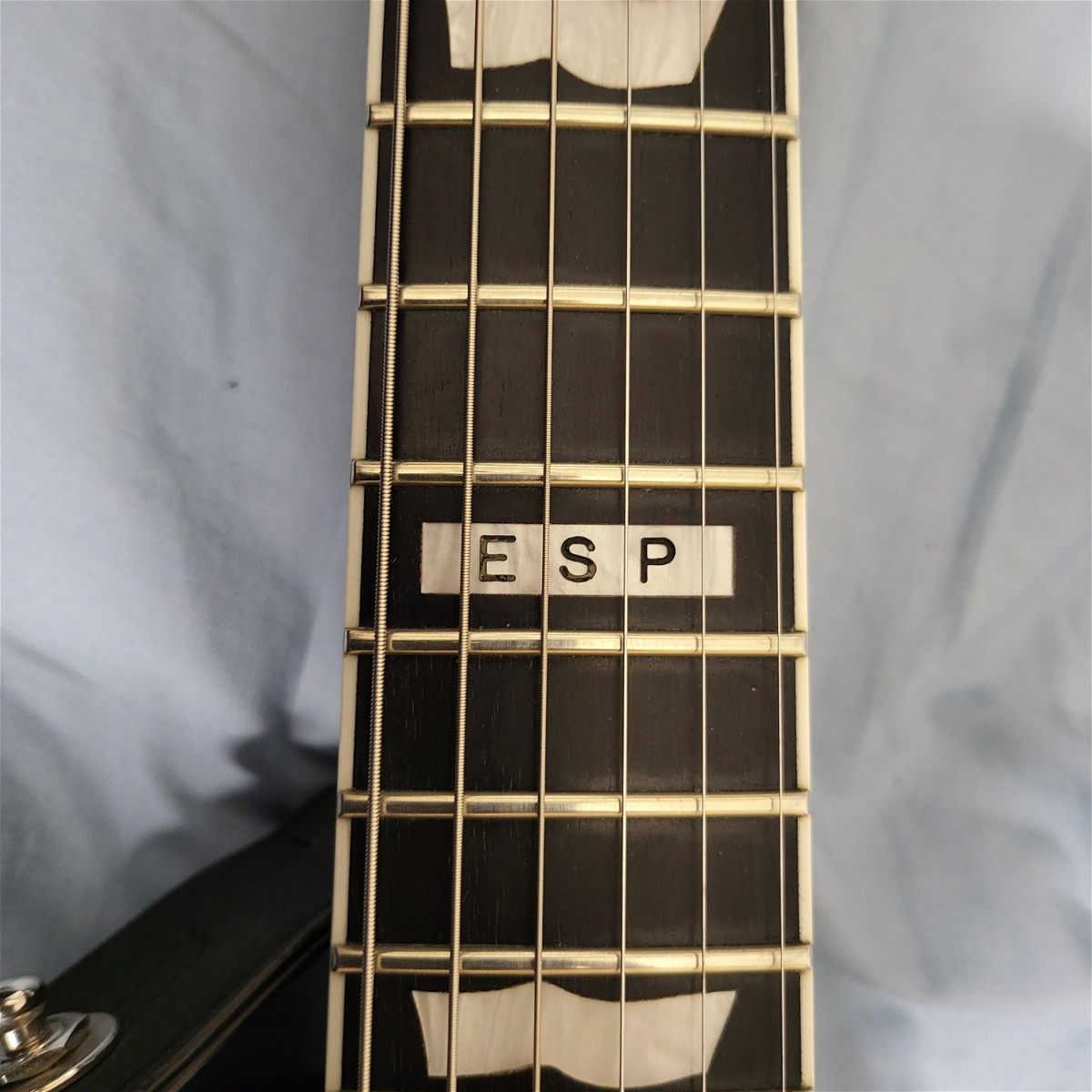 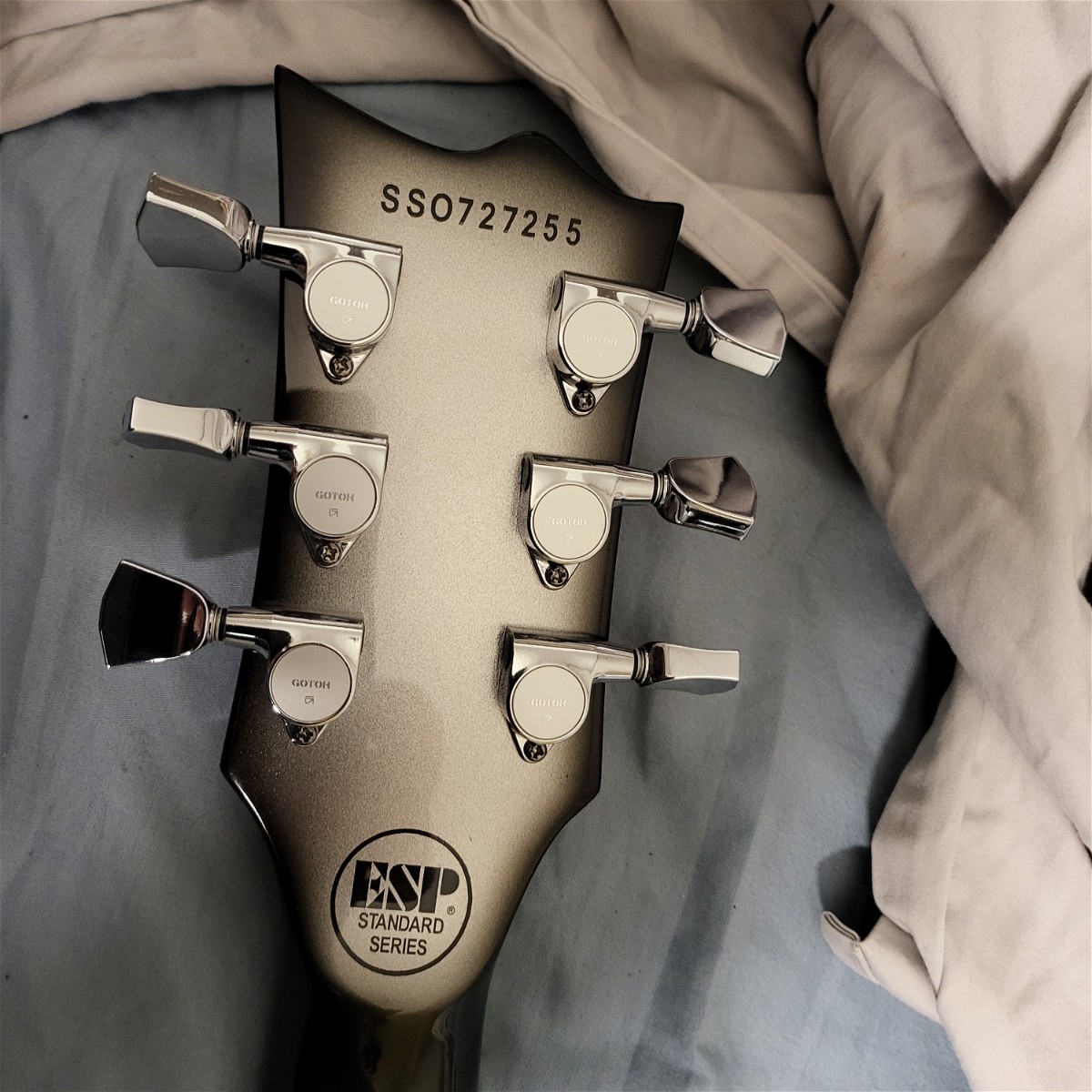 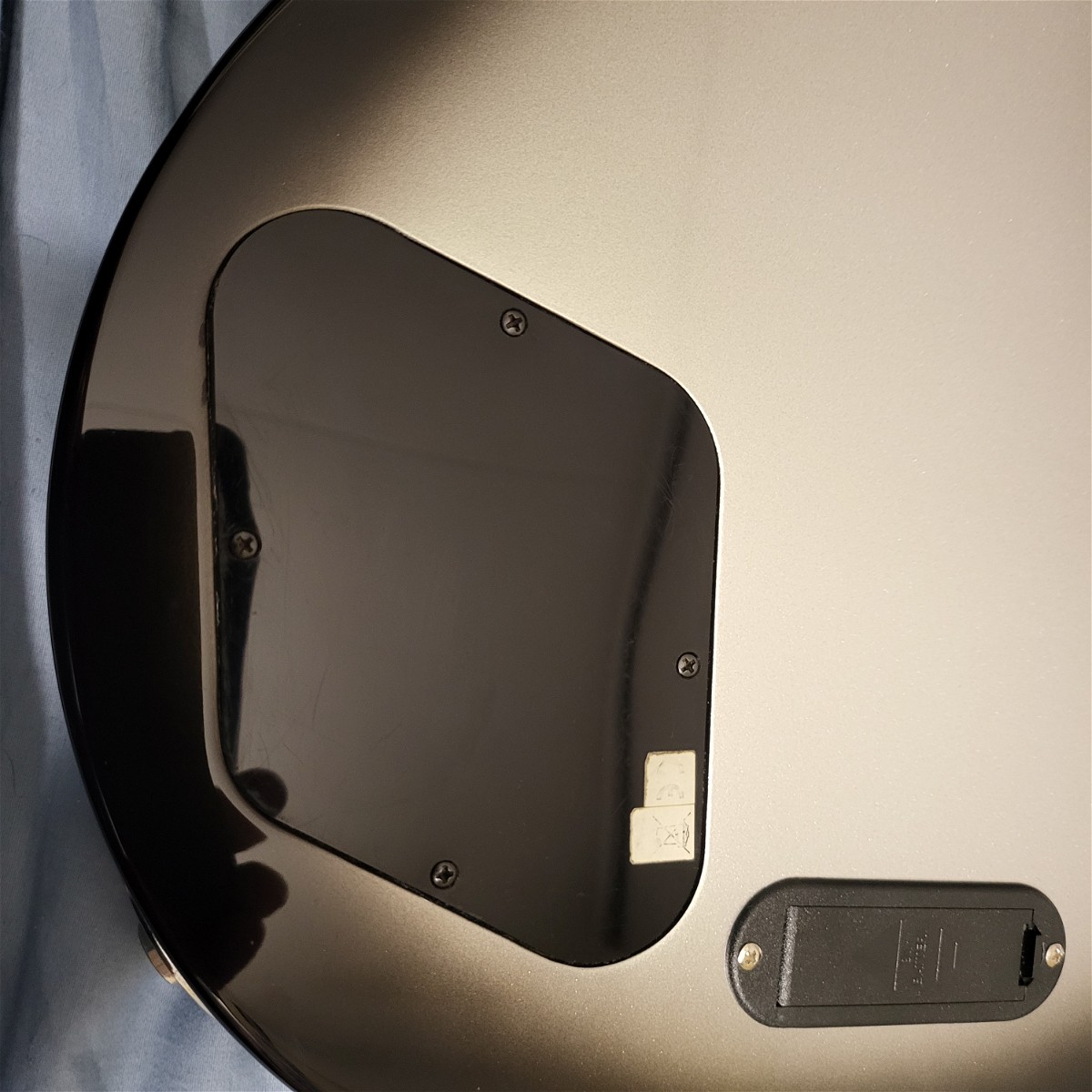 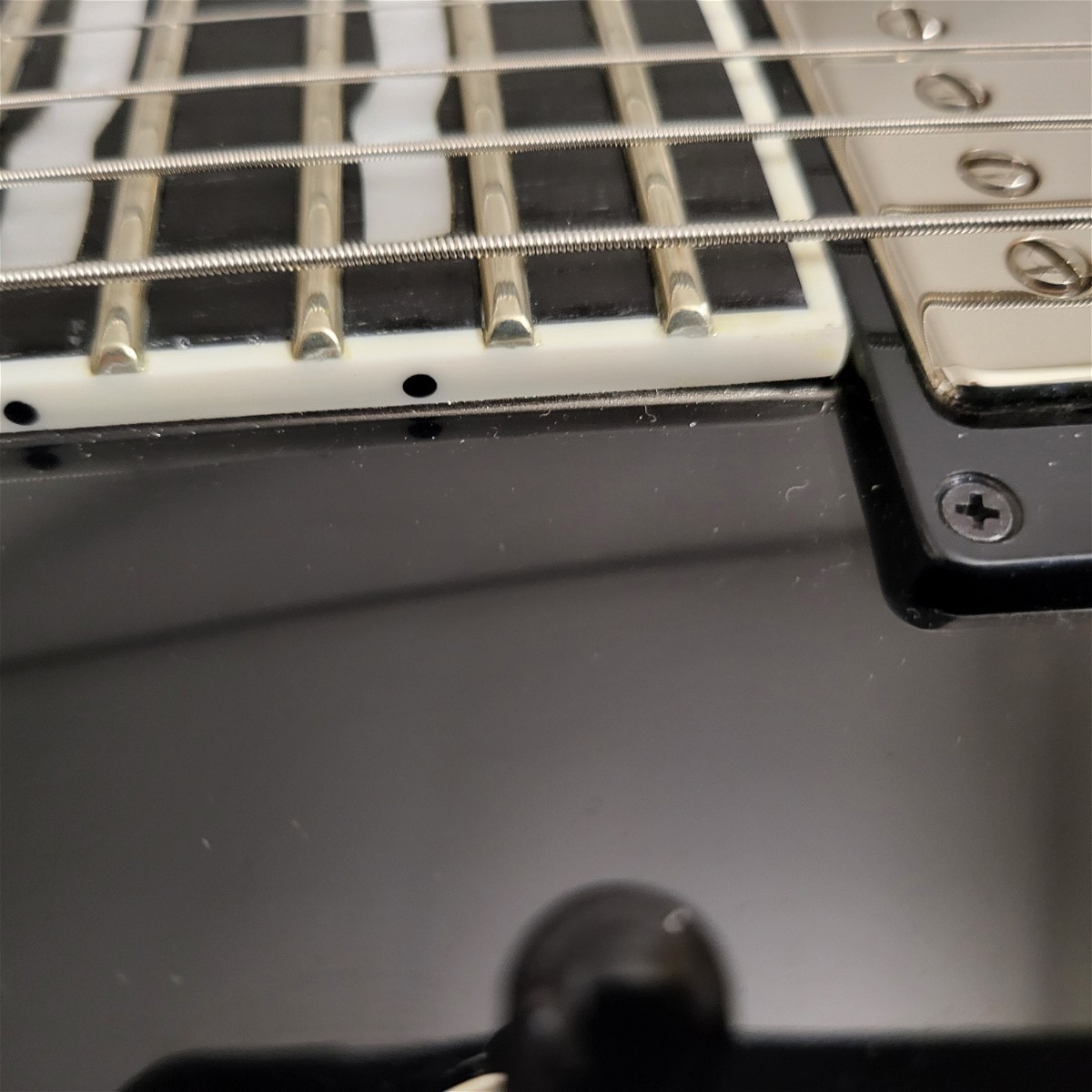 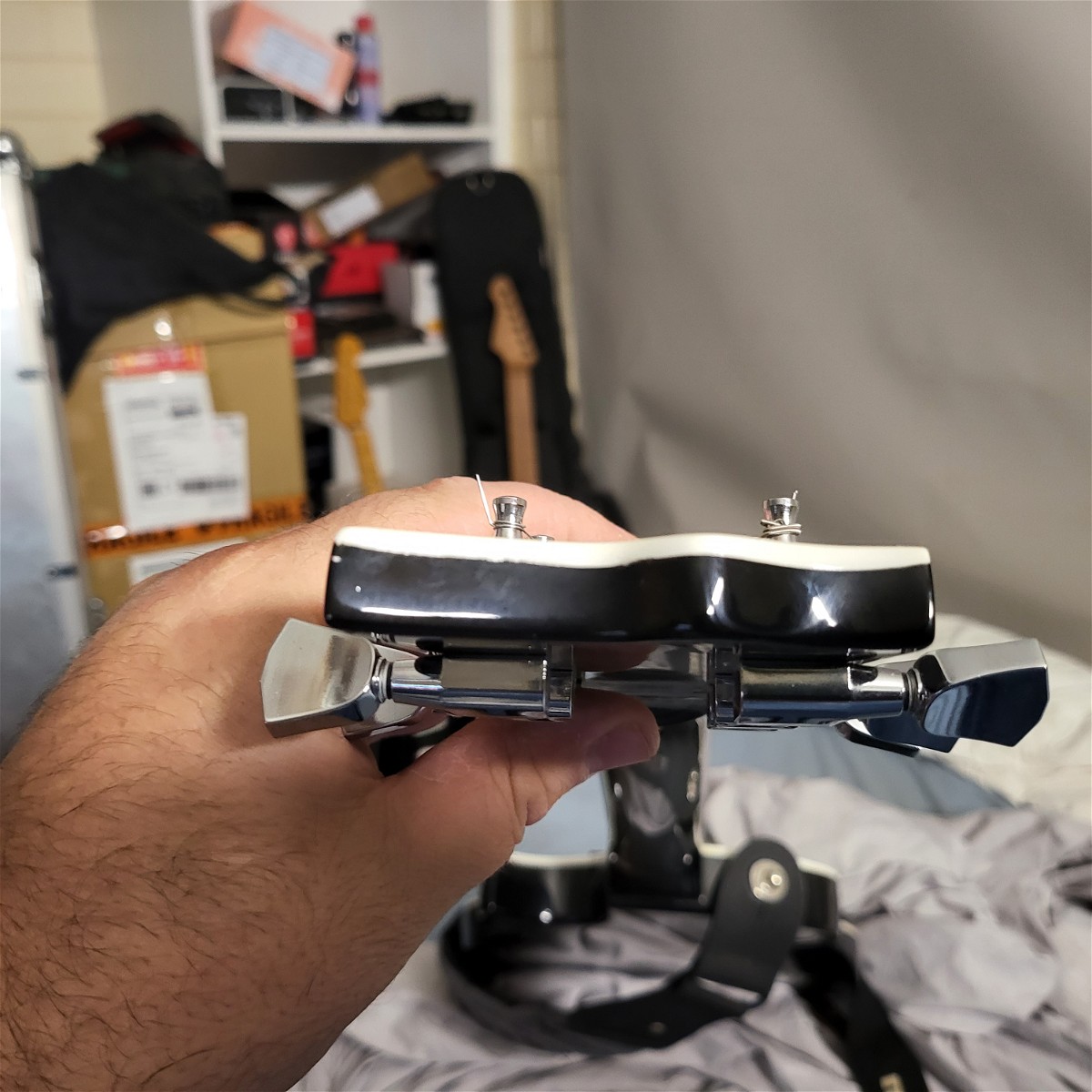 Please review photos for me for real or fake. I'll leave all comments out to not skew the opinions. cheers in advance!

BCB, any chance we can see a photo of the full guitar? It looks to be a 2007 Eclipse I in silver sunburst.

Based on what we can see in the photos, the serial number seems a bit wonky, especially O instead of 0, but maybe it's just because the photo is so close to it. The circle logo also seems off. It wouldn't surprise me that the guitar has been refinished, which I think is why you shared the photos of the headstock binding and along the body/neck joint. I've seen rough transitions at the body/neck on standard series guitars, so perhaps that's just stock. The back of the headstock on my SSB is entirely black. It may be different between model years.

The biggest concern to me would be the battery cavity, which was likely added after the fact. I just don't like those specific plastic battery cavities in general, they break really easily.

But there's a lot in the details that seem fine.

If it helps make you feel better about the guitar, here's my Eclipse I SSB to compare it to. It's a 2010, and the knobs have been replaced, but it should be close enough for this. 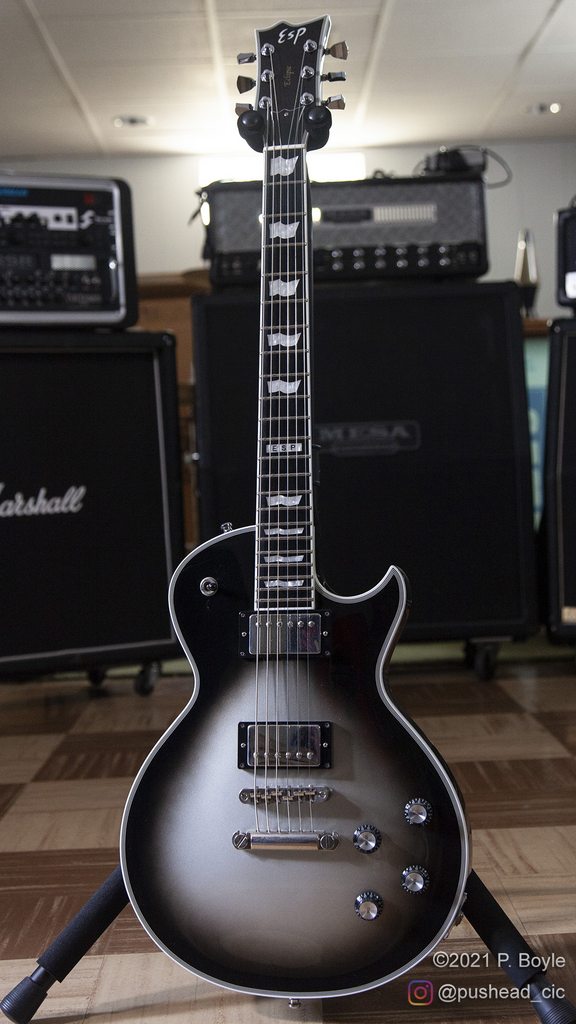 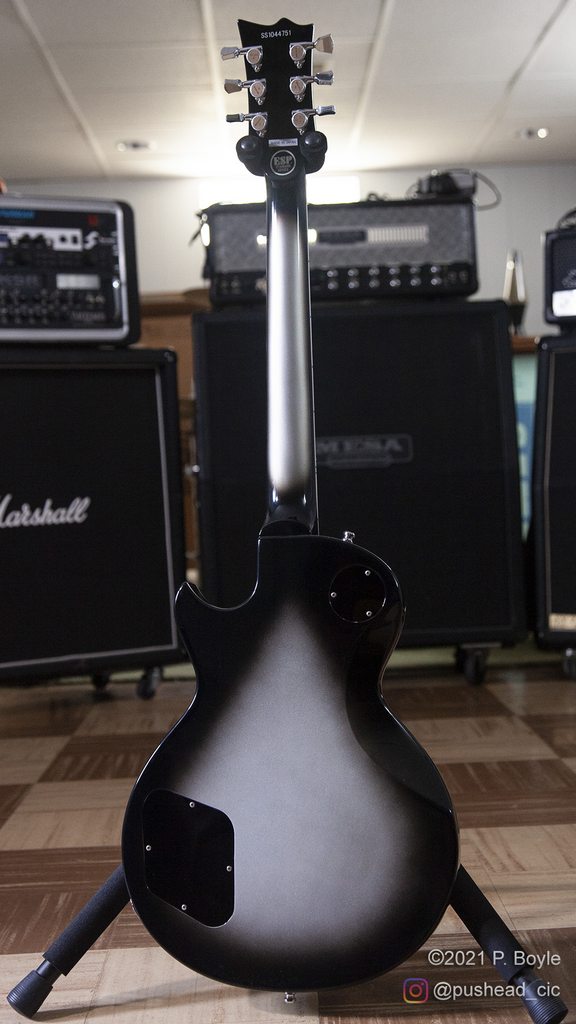 Cheers man.  Here is the full shots.  I did a post about this one a while ago and we compared bursts .  Battery cover was added with a pro installed graphtech peizo system so not worried about that one.  As for the logos it took me a while to spot them as they are super well done and the overall guitar defs feels legit (I have another 4 knob to compare it to) but the logos and these few specific transitions got me thinking (aswell as the silver back of headstock variation) and I think maybe refin aswell but I did think that maybe because it is a black logo it just looks slightly different than normal IDK. If it was refin it was a super impressive job   I have pulled it all apart and all cavities look factory (compared to my other one) with usual shielding and buffing compound buildup.  In the light it is hard to see any residue and signs at all of remnants of the Made in Japan sticker aswell which is another that goes against it being factory colour. 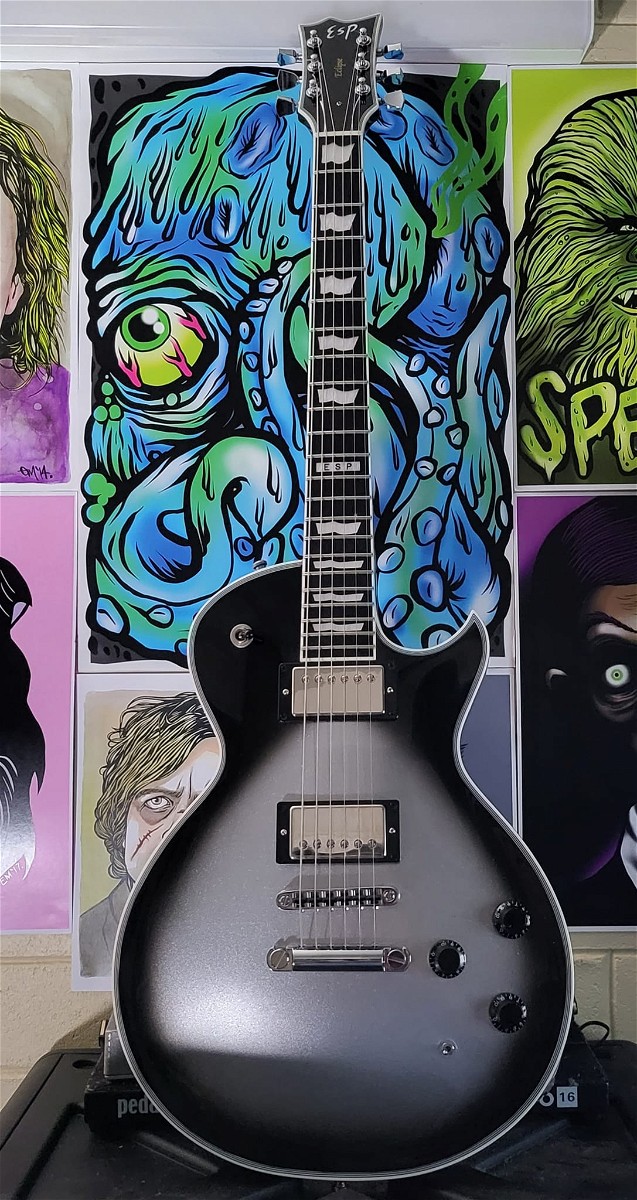 In the end it sounds, plays and looks incredible but I did pay collectors money for the guitar based on being a factory silverburst and now I am not so sure.  Guitar is a keeper though but I might dig a bit deeper to see if I can get previous owners to verify anything.