Hi All! I have Grynch for sale that I've owned since 2006. It's in great condition and largely unplayed. It comes with a COA and Gator Extreme case.

Based in the UK. Looking for offers in the region of £1300+shipping. DM me for details and further pictures. 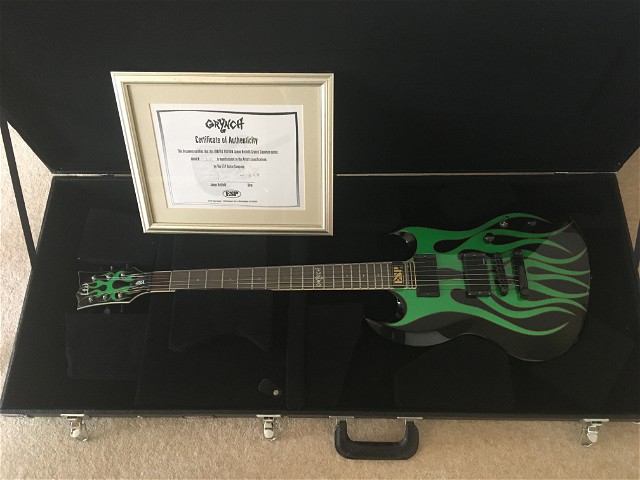 *edited as the image didn't upload

Is that #165? Your name sounds familiar, maybe you have bought it from me? I live in the Netherlands.

Haha that’s so cool! Can’t imagine it has been that long. Tempting to buying it back, I will think about it!

Haha yeah time flies! I was so happy when I got this guitar. Even now I still think it looks so cool and when I see the paint shining in the light it makes me smile. Let me know if you're interested in the Grynch.

If you collect other guitars you might be interest to know that I'm also selling an Ibanez EP7 acoustic (green one). I've had it from new and kept it untouched. As you can guess I've got a family on the way and need to sell some equipment!

pm me we can finalize the transaction

pm me we can finalize the transaction

Hey, thanks for reaching out. Unfortunately the Grynch has already been sold.

Hi All. The Grynch has been sold.

Wow was a good price too.

If he really did buy it, then it will definitely be 3x more expensive now lol.

I guess he's in the business to make money lol.

Wow Essex got it lol

LMFAO this has gotta be a joke

LMFAO this has gotta be a joke

And he's gor another one today :

And he's gor another one today :

I’m sharing my thoughts on this all and maybe those buying/selling a Grynch in the future will happen across this:

When I first saw The Grynch (not this one, but a different one) I thought it was the coolest guitar ever. Somehow it really chimed with me. Though I was 15 or 16 at the time and I’m now in my 30s, I still do think this is an outrageously cool guitar. I had a small amount of money saved but didn’t think I’d ever come across one for sale. When I was 17 I had a summer job in an office (ie, making coffee and photocopying documents) and I put that money away. Literally on my last day I saw one come up on eBay and was fortunate enough to buy it. So as a Metallica fan, a Grynch fan, and a dreamer, I felt like I had hit the jackpot. For the 14 or so years that I owned the guitar I never got sick of looking at it and occasionally playing it. Eventually I figured that it was just sitting in its case most of the time and there’s probably others out there who would benefit more from it. So this side of me is torn with the mark up to £2,500 because it perhaps does price those other dreamers out of the market and moves it more in to the realm of those who probably already have other collectable guitars and cool stuff.

From the other perspective, it should be noted that I’m also a realist. I had put some feelers out in over the past years. In my honest opinion, a Grynch is probably worth about £1,800 ($2,300). I keep an eye on those that come up for sale and in the 17 years since these were run there is a rate of attrition. Some are damaged and neglected and others are simply taken out of circulation by long-haul collectors or those that have found it as their holy grail. These guitars were retailing in the UK for about £650-£700 ($1,000 with the exchange rate at the time) when they were released. Adjusted for inflation in the UK, this is about £1,100 ($1,300) in today’s money. The GBP rate to the USD has tanked in recent years which is why this inflation increase isn’t proportional in USD.
Now the rate of attrition since production represents a conservative 25% premium. This is of course subjective but I think a 25% since production is maybe on the lower side given the buoyant market for limited-run ESP guitars. Generally, those vocal about it being Ltd, linked to what is generally accepted as the worst Metallica album, a baritone instrument etc are usually buyers trying to justify a lower price. This is still important and fair because the market is determined by what buyers are willing to pay. In finance, value is also derived from what people perceive the asset’s future value to be worth. With these guitars, of course if you can hold on to them for a long enough term they will increase in value for reasons above. Buyers will pay more for them as they become rarer and as such it can reasonably be expected that the guitar will create ‘value’ over time rather than diminish it. Therefore I believe a reasonable price is £1,800 / $2,300. This is of course based on my own metrics and more of an economist-view which is often different from reality. I’m no ESP valuation expert but I’m no dimwit either.

Now I can’t speak on behalf of the buyer so the following is from my assumptions only. He is a commercial seller and a business-person. He was proactive and decisive when buying and to be successful, you need to be quicker off the mark than others. It’s partly for this reason that he’s able to amass these guitars and become a more powerful player in the market – giving him more ability to dictate pricing. If he’s doing this commercially, he will also have other costs to factor in such as research and marketing, storage and security, heating etc. He’s got a recording studio which is probably not the most profit-making industry (more a labour of love) and maybe he needs to supplement that side of the business through other means such as instrument reselling. As part of his umbrella brand, I’m sure that some of the markup of his guitars is also for these associated business expenses. The music industry in the UK is a skeleton of what it used to be. When I was a teenager it wasn’t possible to cut a studio-quality EP in your bedroom. People couldn’t stream music on YouTube and they actually went to gigs. I’ve got full respect for those who make their livelihood in the arts and though music and recording. It can’t be easy and maybe if selling a Grynch for £2,500 keeps the lights on, then fair play. Regarding all the other equipment and Megadeth guitars: I’m sure that to be good in business you have to be creative and have good PR. That stuff, and having these giants of metal drop by for coffee, doesn’t happen by accident. It takes someone probably considerable effort to make it happen. Again, it’s all marketing expense and brand building. Also, from a deal viewpoint, if it’s for sale for £2,500 ($3,250) that doesn’t necessarily mean that is the final price. Make an offer for what you think it’s worth because the market is ultimately priced by what people are willing to pay for it. If you have £1,300 / $1,600 but not more to spend on a Grynch, give it a go. You never know.

Finally, I met the buyer in person during the sale. I would say he is very proactive. He seemed like a really great and friendly guy. I got the impression that, first and foremost, he’s an enthusiastic fan and a metal head who loved the guitar. Again, it’s not easy to make a living in the UK in music and if this is his way to keep the wheels on the wagon, then that is his choice. While I don’t necessarily agree with the spirit of listing the guitar for £2,500, I’m sure there is more to it that trying to pull a fast-one on ESP enthusiasts and make a cheeky dollar. Final remarks are that he is the legal owner, so he can sell it for whatever he wants. That said, I remember back to my 15 year-old self and wrestle with the prospect of not selling it to some who dreamed to own a Grynch but never thought they could...

Thanks for sharing mate and congrats on the sale.

And he sold it. Thanks god he has another one for sale, great price too!