These prices are getting to people's head now...

Forums / Signature Series / These prices are getting to people's head now...

These prices are getting to people's head now...

I am sure the seller is willing to negotiate.

Hopefully at least $10K less than the asking price lol.

What is a fair price for a Ouija? In France a guy selling one for more than 10k too ...

They range roughly between 4-6k for the most part.

I reckon BlackJack is on the money.

$4K or slightly less in poor condition up to $6K in mint condition.

Some people are lucky or unlucky to pay more or less sometimes lol.

I saw a guy on Facebook around 12 months ago post up that he purchased an original Ouija in the US at a local guitar shop for US $1200 in excellent condition.

He posted pictures, guitar looked awesome. He was one of the lucky ones lol.

Luckiest of the lucky that’s it !

Just because someone listed a guitar for $15K does not mean it will sell for that kind of money.

Spot on Flamey! It's on;y worth what someone is willing to pay for it.

Pricing has gotten crazy outside of Japan, I think Australia is still the next best source given their proximity/currency/western business approach. I just import everything now from Japan/Aus. Even with import duty, shipping, sometimes brokerage fees (in Japan) it still works out significantly cheaper. It's a shame because i think the 'ESP USA' custom line has diminished any interest from ESP Japan in expanding the availability of the 'original' custom shop instruments from Japan. They seem very happy to keep that stuff exclusive to their market unless you want to build to order or wait up to a year for an original series to come into stock.

They don't make enough Original series/Custom Shop Signature stock to supply dealers in US/UK/EU or even have the option of a few high end models showcased in stores that can move around/go back to distribution if they don't sell, so it's become a supply/demand issue, almost no-one has the model you want when you want it outside of Japan and there doesn't seem to be any desire to change that. Meanwhile you have brands like PRS exporting $4-10k guitars all over the world to dealers everywhere and dominating that space with events like the PRS Experience - where the regional distributors will bring a couple dozen incredible guitars to various stores for people to try/buy in person (and they're great guitars, I have a few myself) but it's disappointing to see ESP market share shrink against competitors worldwide when they make some of the finest guitars you can buy.

Guitar Factory in Aus recently hooked me up with killer deals on brand new H-III original in Titan Metal and a new Sunburst Tiger, cost me the same as buying used locally - if i could even find them.

Picked up an ESP natural Ouija for about half of what the one on Reverb is going for in Netherlands, bought from ESP Technical House via a friend in Japan who i paid a 5% commission for helping out, they had it listed as a used model on consignment.

The Netherlands guy on reverb, I even offered him 20% more than the Technical House was asking initially, since he's in Europe and could have shipped directly to me with no fuss/customs/broker/etc... and he didn't want to know. Meanwhile my ESP Ouija will arrive next week

Congratulations on the Ouija it’s a fantastic guitar. I’m with you on not wanting to pay more than the retail price. Like everyone on this board is stating these guitar prices are going to peoples head and really driving up prices. I know that any item is worth what one wants to pay for it but at some point the companies that make them are going to see what one is willing to pay and start their retail market price higher. Enjoy brother.

what number is yours?

He is selling this ouija in name of someone else. I made him an offer as well, €10k+ but the owner is looking for a few grand more....

Thank you, George - this is my recent purchase: https://www.digimart.net/cat01/shop4899/DS06224037/ it's number #22 from the serial, it hasn't arrived here yet but i'll be posting some photos etc when it does - although the shop photography is pretty solid. I thought the price was fair, it's never a cheap guitar wherever you look but I didn't want to pay MSRP for a used guitar, so shaving a couple grand off that original price point was a win for me. At least ESP have held the pricing for the OUIJA's steady on the various iterations, although it does feel like an arbitrary made up price with a fair bit of wiggle room so i don't think they need to worry too much!

I've actually got a Jackson CS with a B&W white Ouija graphic and I've been after a natural ESP OUIJA for a while, I have a similarly rare 'Haunted Mansion' guitar from Minarik, one of 13 made for the 50th anniversary of the attraction at Disneyland - so I've got a little collection going of ghostly custom guitars now 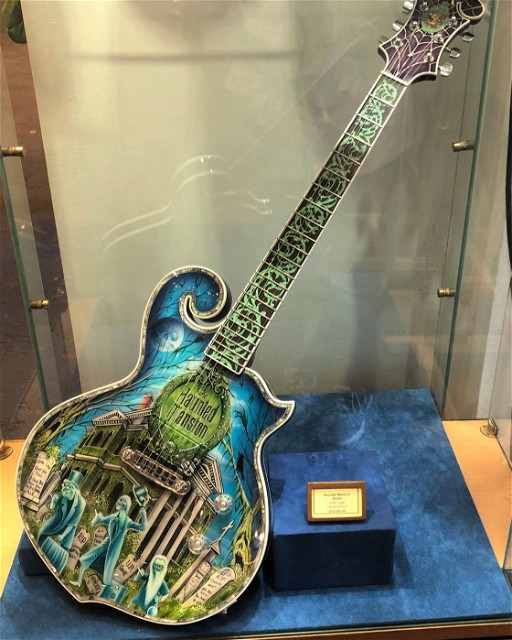 That's an awesome Minarik guitar, never heard or seen them before till now.

Thanks mate, I will check it out now.