What model is this?

Forums / ESP Past Models / What model is this?

What model is this?

Does anyone have an idea what this one is: 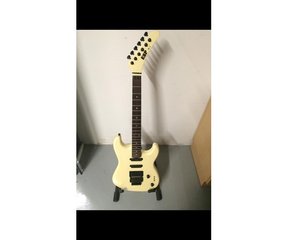 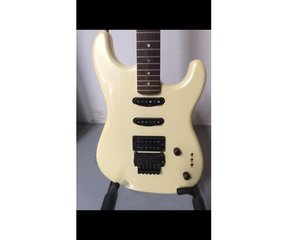 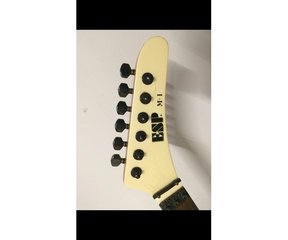 on the neck-plate is written:

If is written it is a particulary M-I series

Hey there, thanks. I don't have this guitar but am looking to buy it. There is no neckplate since it is neck through. Supposedly it is around 17-18 years old. I will see if i  can get a serial.

Got a little more info, it is not neck through. It is made in Japan and the serial on the neckplate is 03522

this ESP was made in Japan before years 2000 because it has only five serial numbers. Five numbers in the bolt plate was particulary used of the end of '80- for all the '90:

I think a thing:

The banana headstock began to be product by ESP after the first George Lynch project ( The Kamikaze one) . This was made in the second part of the '80 near '86-87. So this ESP was made fro '87 to '89.

I did not found in the '80 ESP catalogs this guitar but I hnow that there was a time .... And I founded in this link with a photo, that:

"ESP even recognizes the relationship with Kramer over in the Japanese Market. They have that model called the "the jerk", that's like a baretta body with a non slant humbucker, and banana headstock. Obviously, its a nod to their Kramer producing days.".

Look the photo, is similar for conception...

As you can see also this is a particulary ESP ( Kramer inspired) as says the link that I have put up.

I think that also the ESP that you have posted was the same.

Do you happen to have a link to the ESP catalogs

This is an ESP page but for not all is possible to open the catalogs pages :

I have the other catalogs but now the access for these pages is closed :(

Some years ago I tried these and now I have these on my computer. If you want I give tou this link (is expecially for Jackson-Charvel guitars but there are also vintage ESP catalogs):

Did you end up buying this guitar?

i want to buy it