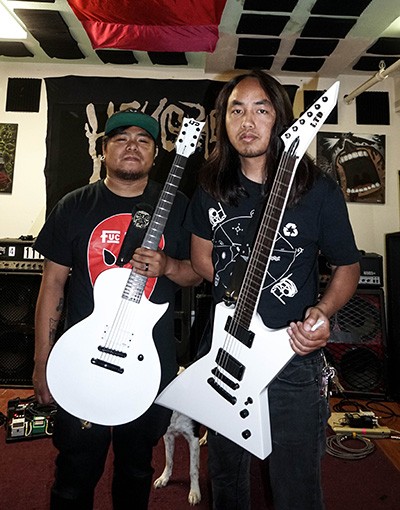 Sometimes it seems like people forgot what rock and roll actually means. It's a lot more than just distorted guitars and screaming vocals; it's also an attitude.

Just ask members of San Francisco-based crossover punk/thrash metal band Hemorage. While many other bands are waiting around for their big break, Hemorage created their own by outfitting a mini tour bus with gear and merch items, and then driving around to various events to bring their sound to people whether they were expecting it or not. This guerrilla-style tour, which Hemorage started doing in 2017, born out of the frustration of traditional touring challenges, has the band pulling up wherever it seemed like they'd have a receptive audience... mostly dive bars, clubs, and arenas where other metal bands were playing. As the venue shows would end, people would start to filter out into the parking lots or right into the street where Hemorage's bus was parked, and that's when they'd start their show.

Before you decide to take the same path as Hemorage, keep in mind that it's not the easiest way to go. Few if any of their shows had actual permits to perform live music, and a good number of them got shut down once people started filling the streets and mosh pits spontaneously sprung up. Perhaps the most well known of these occasions happened on April 12 of this year, when Hemorage pulled their bus up outside the San Diego, CA tour stop of "The Bay Strikes Back" with Testament, Exodus, and Death Angel. Exodus guitarist and ESP Signature artist Gary Holt noticed them immediately, and posted a video of the band on his Instagram that night, saying, "Hemorage are raging in the streets of San Diego! Roll up in mini bus, start killing it right next to our bus, simply the coolest thing ever, security guard be damned!"

However, as happens more often than not in these situations, cops came in and had the band stop, but Gary and his bandmate (and fellow ESP player) Lee Altus still wanted to show support. A follow-up IG post from Holt read, "When Hemorage were shut down by the San Diego police yesterday! Lee and I did make it down to buy shirts! But the street concert came to an end right then and the there! This band rules! Buy their merch and support this band!"

We heard about this at ESP and decided that Hemorage was a band who truly represented the modern incarnation of the real rock and roll vibe, and that they absolutely did deserve support... and we could offer them more than just buying a couple of t-shirts. That's why we're proud to announce that Hemorage members Jonathan Orque and Bona Pak are the newest members of the ESP artist family. Jon is playing an LTD EC Arctic Metal, while Bona is rocking an LTD EX-401 in Snow White. Both guitars will be perfect for Hemorage's relentless sonic attack, and we're hoping that sometime soon, the band will get enough of their own well-deserved recognition and not have to worry about getting their bus shows shut down anymore! Get more info on Hemorage at their official web site.

These artists are awesome

Great duo. One of the best.

ESP Guitars community discovered artists around the world to build their foundations. All the best!