Rotting Christ On the Road with their ESPs

Rotting Christ On the Road with their ESPs 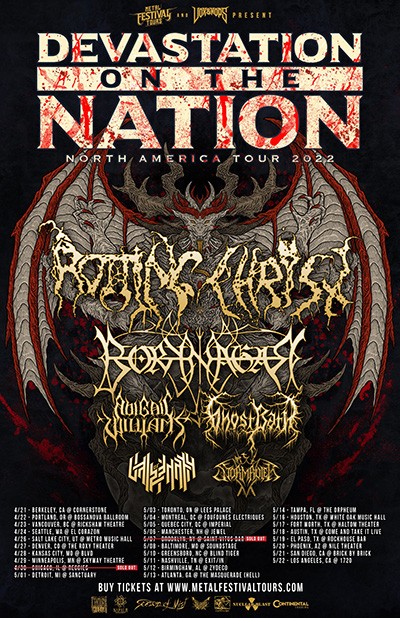 Here's a story you've probably heard a few times recently. The Devastation On The Nation tour, featuring multiple bands including Athens, Greece-based black metal forerunners Rotting Christ, was originally scheduled to happen on two different series of dates over the past couple of years, and then the pandemic happened and it had to be canceled and rescheduled. We're happy to report that the tour is now underway and by all accounts is going tremendously well, with more and more of the shows selling out.

That's great news for Rotting Christ, which features ESP artist Sakis Tolis who founded the band in 1987, along with fellow ESP players Kostis Foukarakis and Kostas Heliotis. Sakis is turning to his ESP E-II Eclipse that's been outfitted with an EverTune bridge and a set of Fishman Fluence pickups.

Dates for the Devastation On The Nation tour are listed below. For the most updated info and tickets, visit the Rotting Christ site.