Our friends at Premier Guitar magazine have just released an in-depth review of the ENGL Ironball Special Edition E606SE. As you hopefully know by now, ESP distributes ENGL Amplifiers in the USA and Canada. The review, by veteran Premier Guitar editor Shawn Hammond, is very thorough, and includes an audio example of the amp. It also dives deep into the Ironball SE's incredible degree of flexibility with its packed feature set. As a result, this lunchbox-format head has received the coveted Premier Gear award.

"Where some lunchbox amps have minimal controls, the high-gain Ironball has 29 knobs, switches, and buttons in a package that's only slightly bigger than Orange's Tiny Terror. At $1,499 street, this EL84-driven 20-watter isn't cheap, but even amidst an increasingly crowded field, it stands out for its sheer number of features and bang-for-buck ratio." - Shawn Hammond, Premier Guitar 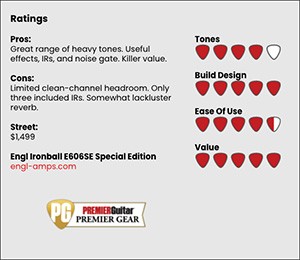 Read the entire review on the Premier Guitar site.