A member of the ESP artist family since he joined DevilDriver in 2004, Mike Spreitzer combines tight, intricate grooves with soaring melodic leads that have become a trademark of this band’s sound. With a new double album coming out soon, we wanted to check in with Mike to see how things are going in the world of DevilDriver and beyond.

Do you remember when you first become aware of ESP Guitars?
Yeah. It was really early on. I am a massive Metallica fan, and just like a lot of fans do with all bands, you want to know what guitars they are they playing. I ended up buying one and loved it from the start.

What ESP models are you playing now?
Eclipses at home, and V’s on tour.

What is it about the Eclipse that suits your needs as a musician?
It just feels right in my lap when I sit. There’s also something about the way it looks that really appeals to me. It’s funny, because I hated the single-cut guitar style when I was growing up. It just looked too classic to me, and not modern enough. Then, when I was in my early 20s, that completely changed, and it’s my favorite now.

Most people look at three qualities of a guitar to choose what’s right for them. What’s most important to you between sound, feel, and looks when you’re considering a new guitar?
The big thing for me is where you’re forced to place your hands. That’s why I could never get into some of the more extreme body shapes. You sit down with the guitar, and it positions you so that you have to shift your hand to the left a little bit. For some people, it doesn’t seem to matter very much, but for me it’s the biggest thing. The feel of the neck would be the next.

You’ve been playing Fishman Fluence pickups in your guitars lately. What makes the tone right for you and for your music in DevilDriver?
I actually play both the Fluence and the Signature Series Devin Townsend model. There’s a story behind this. It happened at Third Encore (the well-known rehearsal facility that happens to be next door to ESP in North Hollywood, CA). We were getting ready for a tour, and I had the Fishman Modern Fluence pickups with me, but hadn’t installed it in a guitar yet. My guitar tech put them in. I think we were rehearsing “These Fighting Words” and there is fast 16th note tremolo picking on two strings at a time in that song. My tech swapped out the Fluences, and there was something about Fishman’s ability to let me hear each string played distinctly. 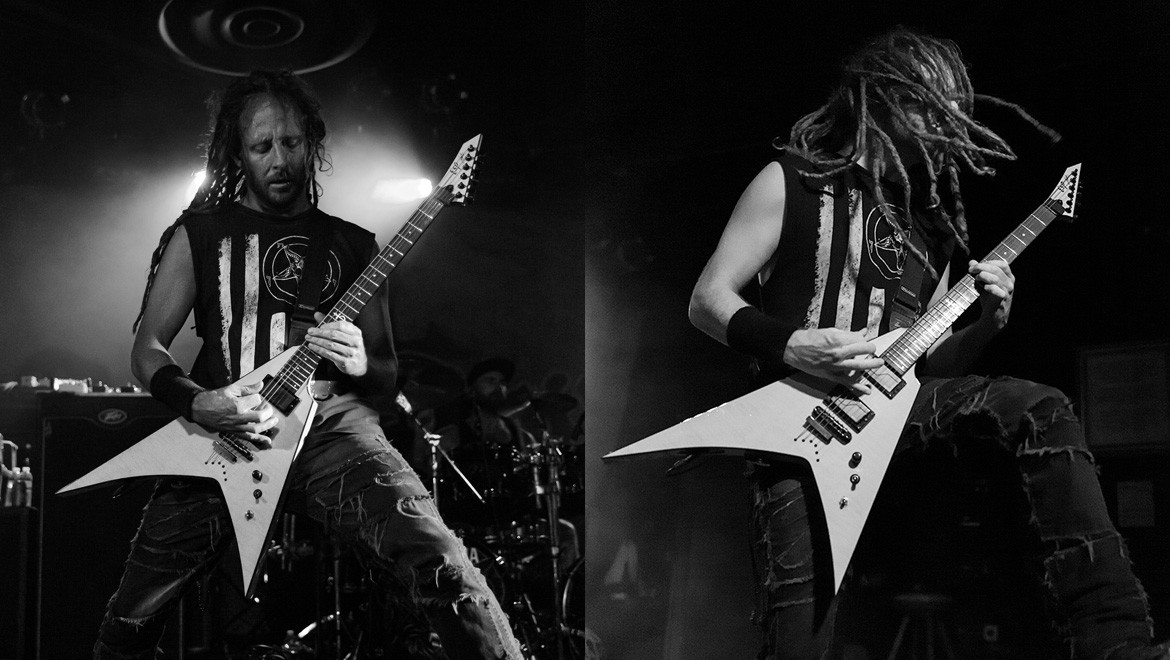 How old were you when you started playing?
I started at six, but I hated my guitar teacher. I quit for awhile and then started again when I was 10.

Who were some of your early influences as a guitarist?
Believe it or not, very early on, my two favorite bands were Oingo Boingo and Def Leppard.

That’s a wide range of music there! But were they influential to you as a player or songwriter?
I don’t think either of them influenced me in that way. As I progressed, it would have definitely been Metallica and Megadeth, as well as Alice in Chains and Pantera. Those are the big four that influenced me because that’s when I started learning a lot of songs. There were other bands as well, but they weren’t as fun to play as Metallica.

DevilDriver has a new album coming out in October. The songs I’ve heard seem to be very current in terms of addressing topics like the pandemic, but we spoke in January at NAMM and you’d said the Dealing with Demons double-album was basically done at the time.
That’s correct. By the time I saw you at NAMM, it was done. I’d started writing for it in 2017, and had all the instrumentation recorded in 2019. There was big gap between the instrumentation and vocals, around six months, for scheduling reasons. But we were done with all of my parts in early 2019.

I’m confused, though. The song “Keep Away From Me” seems to be directly addressing the many issues that have come up around the COVID crisis.
That was an amazing coincidence. That song had been picked to be the first single and was written and recorded and mastered well before the pandemic hit. The music video, which does reference the pandemic, was created afterwards.

That’s amazing. It seems like the song is specifically about the pandemic.
We were all shaking our heads. Like, how is it possible we picked this song to be released first? I said to the band. “We’re gonna be getting this question a lot.” Because of that coincidence, a lot of people assume that we just whipped out this record during the pandemic, but think about it. We haven’t had that much time to write a double record! Do you have any idea how long it takes to write and record 20 songs? We can do things quickly, but that would take a miracle. 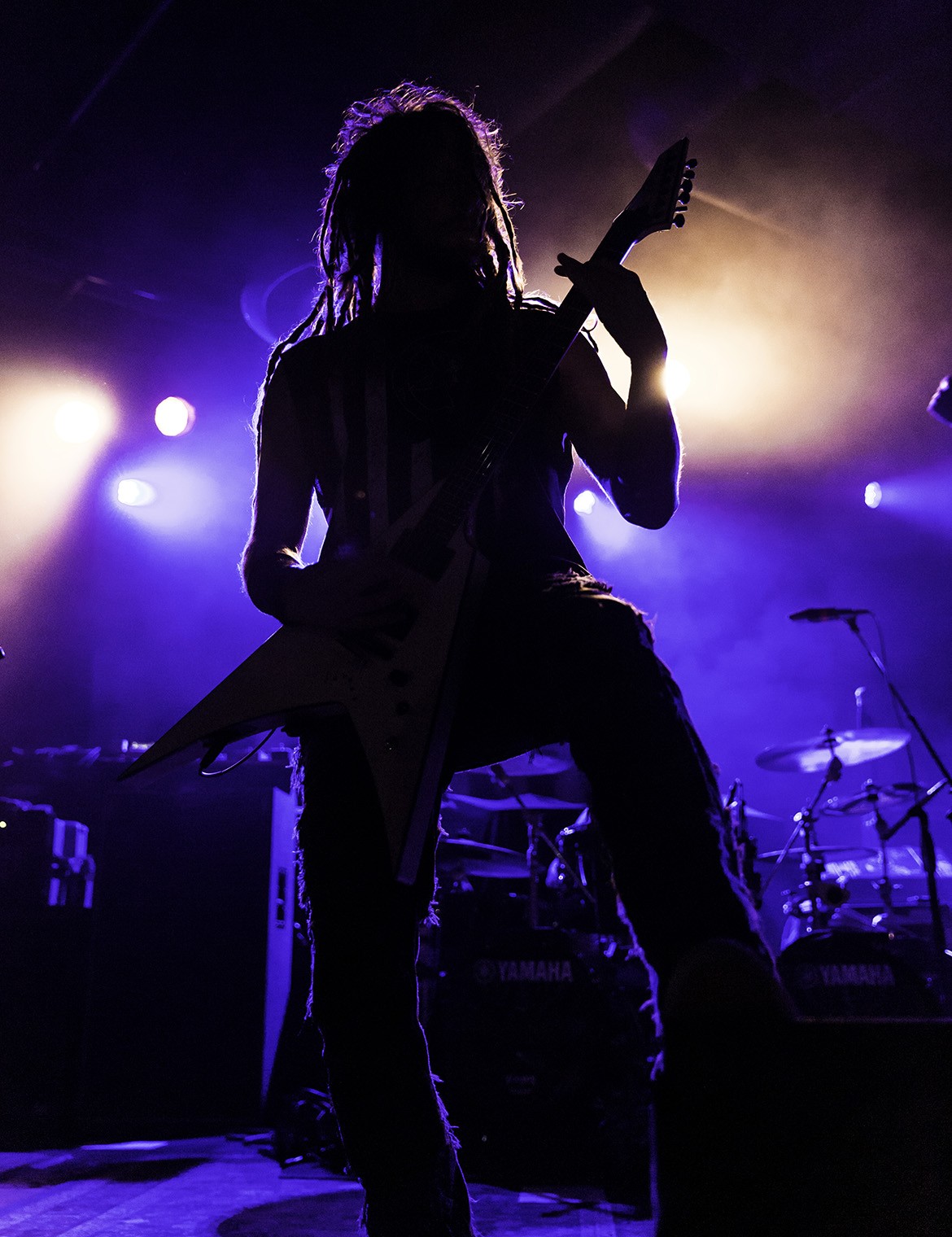 We’re at an unprecedented time in history due to the pandemic, with bands who are unable to go out and do live shows when they’re supporting a new album release. What’s the plan for DevilDriver to get back in front of audiences?
We have some tour dates that are planned for the end of 2021.

I think that’s actually realistic, given what needs to happen before we can safely put a lot of people together in one place. What about some livestream shows before you’re able to go back out in person?
We’ve had some discussions of doing those. We probably will at some point. I’m gonna be honest; I don’t want to do it at all unless it can be done right. Some of the livestream concerts have been cool. Lacuna Coil did a great one, and Metallica did too. But some of the others, with four or five people in a room with a stationary camera… we would never do that. It has to be done right.

Well said. Different topic… name a band or artist that you enjoy that might surprise DevilDriver fans.
There’s a lot of non-metal stuff I listen to. Let’s go with Stick Figure. They’re a dub reggae band, and I’m really into them. The only other reggae I ever listen to is Bob Marley, so it’s not like I’m even all that big into reggae as a whole, but I like Stick Figure.

We have lots of ESP players who are younger and just getting started on guitar or bass. Many of them play for a year or two and hit a plateau where they don’t seem to be getting any better as a musician, and many of them give it up at that point. What’s some advice you have to get past that rut and continue to progress as a player?
I think they need to go out and hunt for inspiration. The best way to learn guitar is to play songs that you love to listen to. If you get distracted by trying out too many songs that are beyond your skill level, you need to keep searching and find something you can play now. Put the harder song on the back burner for awhile, and then get back to it and try again. The bottom line is to have fun doing it. There are a million songs out there that are stupid easy to play.