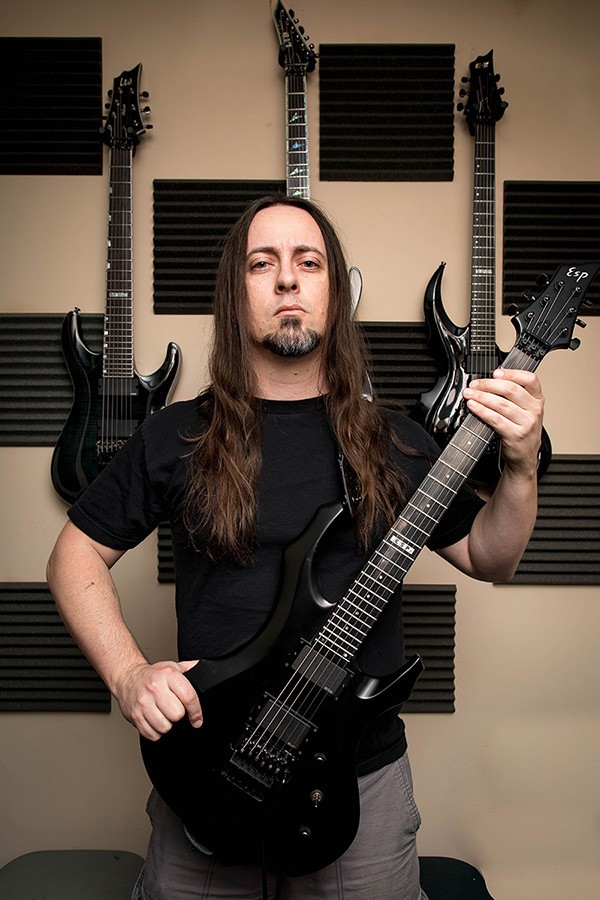 It’s not an easy time right now to be a member of a band about to release a new album… especially if it’s been over five years since your last release. But ESP player Charles Elliott, who is the guitarist and frontman of Los Angeles-based death metal band Abysmal Dawn, is in that exact position. In the midst of the world’s fight against COVID-19, Charles maintains an uncharacteristically positive outlook.

When did you first become aware of ESP?
Probably from watching Metallica and seeing them play ESP guitars. When I was younger, ESPs were hard to find in the US, but you’d see Metallica playing them in videos. I remember thinking, “Those look fucking awesome. Where can I get those?”

What ESP model are you playing now?
Primarily the FRX and the F series. Those two are my main guitars. I also have an LTD Deluxe Horizon 7-string H-1007. We used that on one of the songs on the new album. That was our first time using a 7-string and tuning to A standard.

What makes the FRX and F Series right for you?
The first time I saw that body shape was on a bass that Steve Di Giorgio was using in Testament for "The Gathering". It looked so fucking cool. Ironically, and it’s kind of a scary thing now to think about because of the coronavirus, I remember thinking that it looks like a bat (laughs). That’s what it reminded me of. The other thing about the FRX is that I like metal-looking guitars, but I grew up playing Strats, which to me is the most comfortable guitar shape. So I thought, “If I’m going get a pointy guitar, I still want to be able to sit down and play.” The FRX is one of the most balanced guitars still looks metal. 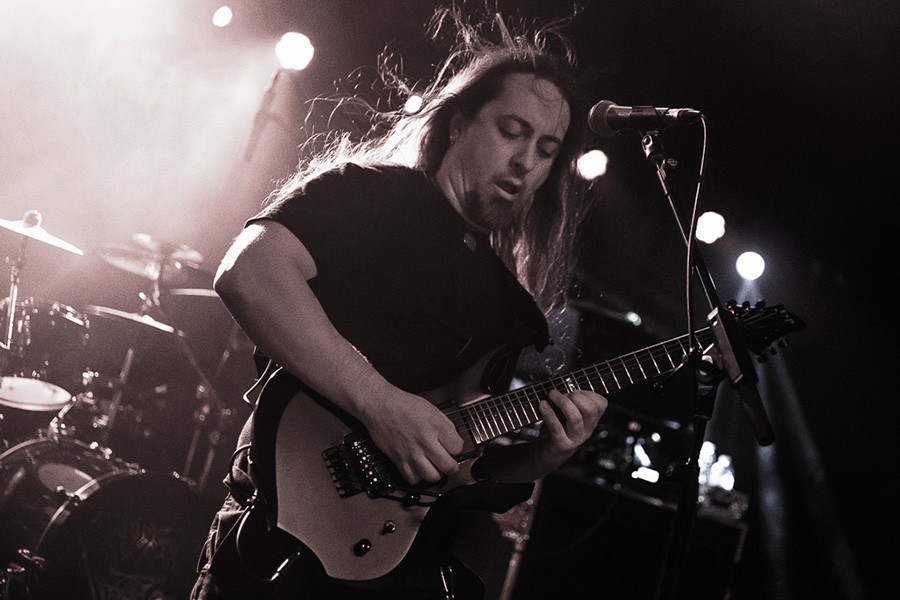 What got you started on guitar? How old were you?
When I first took interest in the guitar, I think it was when I was a little kid. I remember watching Back to the Future, being like four years old, and watching Marty McFly rip it up on a Chuck Berry song and air guitaring along. My parents had me take piano lessons when I was a kid because my grandfather was kind enough to pay for those, but I didn't really take to it. I circled back to what I really wanted to do, which was playing guitar, when I was about 12.

Were there any particular players or styles that pulled you toward metal at that point?
My gateway to metal was more of the grunge scene. Alice In Chains, Nirvana, Pearl Jam, Stone Temple Pilots. Then I heard Metallica and thrash metal and death metal, and it escalated from there. But especially at that point in the ‘90s, guitar playing had kind of gone out of fashion, or at least shred guitar. At that time, death metal and metal in general were the last genres waving that flag of competent guitar playing, or at least aggressive, physically challenging guitar playing based on technique. I admire ESP because they were one of the first to recognize people aren't going to pick up a guitar because Shakira's guitarist plays their guitars. People are inspired to pick up a guitar from these somewhat underground metal bands. Not some pop artist.

We talk to a lot of ESP artists who are being affected in various ways by the COVID-19 pandemic. How has it been affecting you, personally and with the band?
I mean, it’s frustrating. We were luckily able to be one of the last bands to get in a metal tour in North America right before all this happened. And now, our new album comes out April 17. We had plans to do more touring. And our record label has been having trouble shipping records to retail stores with everything closing down. My hope is that fans will buy direct from the band, the label, and online retailers, and it won’t hurt the label or us too much in the end. But yeah, it’s frustrating after almost six years between records. But I'm confident we made an album that people are gonna want to listen to over and over, and that it won't be some flash in the pan. Once we start touring again, I think people will be hungry for it. But for now, people gotta do what they have to do to keep people safe from this pandemic. We're all in this together.

Have you considered doing anything like live-streaming a performance, or something of that nature?
We’ve talked about a lot of possible stuff to keep us busy. We could possibly broadcast a live concert, though I don’t know if people are already tired of those yet. We had some listening parties planned in New York and LA that were cancelled, so we’ve been talking about a livestream event with the band that would supplement that plan. I don’t know; we’ve been talking about using the time to work on some new stuff. There are songs that we left off the album because we never finished lyrics for them. We could finish those and put out an EP. We could record some cover songs. We’re mostly trying to think of ways to stay busy, but for right now, I’m busy enough doing interviews and promoting the record.

Everything we’ve heard from the new album Phylogenesis sounds great. It’s your first album since 2015. What’s changed between your last album and this one in the process of making it?
For one thing, we got a couple of new members. A new drummer named James Coppolino, and a new guitarist, Vito Petroni. Also, I have my own recording studio now, so we did the majority of it here, minus the drums.

Was it less pressure doing things in your home studio?
It made the demoing process a lot easier. We were able to work out the songs a little more, and take our time. From a musician’s standpoint, it’s the most guitar-heavy record we’ve done, and the most technical record. It’s technical playing, but we’re still writing hooks and writing songs. We’re not going overboard and playing like we're an instructional GHS videos from the 80's and ‘90s (laughs). We’ve been excited to have Vito join us. I played leads too, but it was exciting to have someone in the band who can play circles around me. Having a specific lead guitar player like that lets us do out-of-the-box stuff you don’t hear in other bands. 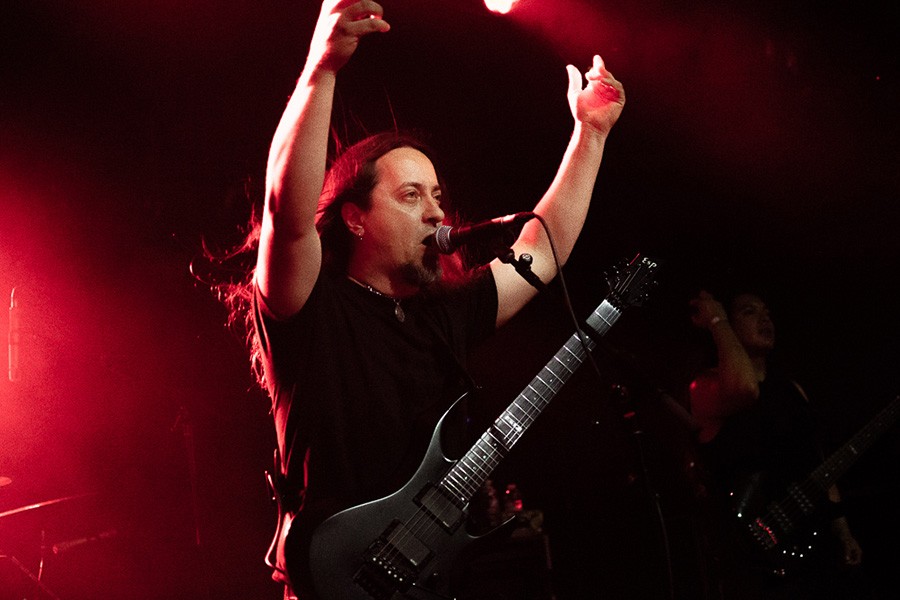 We talked about the look and feel of your ESP models, but on a general basis, how crucial is tone to you?
Tone is absolutely important. I tried out a lot of different guitars on this record. I honestly used an LTD for the rhythm guitars. We listened to a lot of guitars and the one with the best tone for rhythms, I thought, was an LTD M-1000. And then, I went back and recorded leads on the FRX. In general, I like ESP guitars because they feel substantial. They feel like I’m not going to break them on stage. They also have a big fat resonance to them. I’m just a big fan of the guitars.

Would there be any artists or bands that you enjoy that might surprise fans of Abysmal Dawn?
Uh… probably a lot of them (laughs). People like Tori Amos, or maybe Lana Del Rey. The first few records from both of those artists at least. Or maybe old jazz fusion stuff, like the Tony Williams Lifetime with Allan Holdsworth, and Al DiMeola. I'm a fan of Radiohead, Perturbator, and Nine Inch Nails as well, but maybe those are less surprising.

'Phylogenesis' comes out April 17 on Season of Mist Records. Order it today!

Saw Abysmal Dawn a few months ago, these guys rip, and Charles slayed it live, cant wait to see them again when all this blows over.