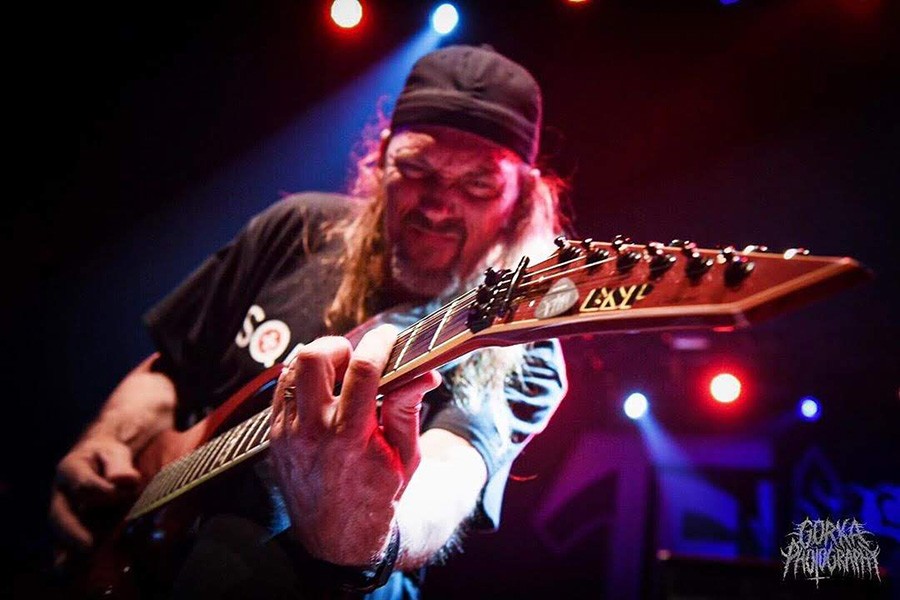 We spoke to Sacred Reich guitarist Wiley Arnett less than a week after the band released Awakening, their first album in 23 years. As one of the earliest endorsees on the ESP artist roster, we were excited for Wiley and Sacred Reich’s return to the forefront of metal.

You have a long history with ESP, going back to the ‘80s. Tell us how you first became associated with ESP.
I think I may have been one of the first. When I started playing ESP, the only endorsees were Ron Wood, Vernon Reid of Living Color, George Lynch, and maybe Stephen Carpenter.

Nope, I think Stef came on after you. What were the circumstances of choosing ESP, which really wasn’t a well-known guitar brand at the time?
We had just done our first record, Ignorance. It was 1986, and I was desperate to get off the guitar my mom bought me. Thinking, “I have a record. I should try to get an endorsement.” I checked out a couple of guitar companies, and ESP was at the top of the list. I asked our manager to talk to ESP first, and if that doesn’t work out, then Jackson, then Charvel.

So, I heard back that ESP might be willing to do something with me, and I was introduced to then-artist relations manager Matt Masciandaro. I had a great talk with Matt about who I was, what I was all about as a musician, and how much I love the quality of ESP guitars. Matt gave me a cost deal on an ESP Mirage Custom. It was a white neck-thru-body design, and had EMGs. It was the coolest guitar I’d ever played, let alone owned. I got that guitar in time to use it to record our Surf Nicaragua record and the supporting tour. I’ve been a loyal ESP player ever since. 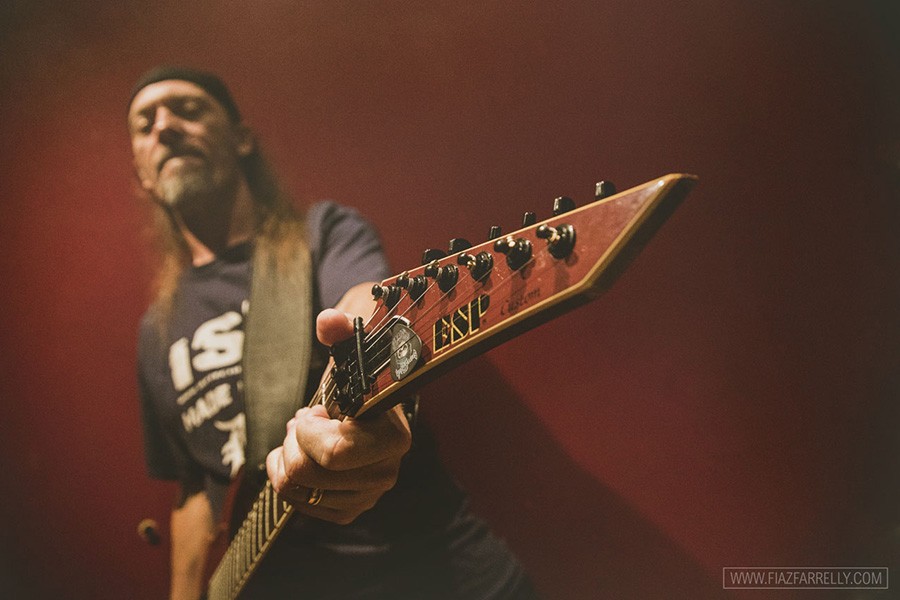 What would you consider your main ESP model to be now, and what have been some of your favorites over the years?
The M-I Customs have the lead at the moment. I started with that Mirage Custom in '86, and then I got into M-I Customs for several years. I have them in Black, Oxblood, and Gunmetal Gray. I still have them all today!

I also have two Eclipse Customs I got around the Heal record. They’re translucent green and translucent purple. I played the shit out of the green one touring with Sacred Reich the last decade. I had them built at 25.5” scale.

What do you get from the slightly longer scale?
Mostly that they feel consistent with my M-I or Mirage. Double-cutaway feel on a single cutaway guitar, pretty cool. Just recently I wanted to give the Eclipses a break, so I’ve been playing a ‘91 oxblood M-I Custom. On this recent Europe tour, I brought the gunmetal gray M-I as a backup. Just yesterday, I pulled my black M-I Custom that I got when Matt and ESP were in New York City. It was the guitar I used for the American Way record and video. It’s kind of funny; that video shows up in that movie Encino Man. This guitar will be going on tour with me next.

The ESP artist roster today numbers in the hundreds, but few of them have been playing ESP for more than a decade, much less for 32 years as you have. What’s that relationship been like for you?
Yeah, it’s pretty unique. It really is. There are a lot of great guitarists in the ESP family and it’s an honor to have been a pioneer. I think the thing that really shows how strong the relationship is, is that even after the band stepped away from recording for 23 years, I always had a home with ESP. Now that we are back with a new record, Matt’s the boss and runs the whole show. But despite that, any time I’ve called, I’ve had top level support from the company. 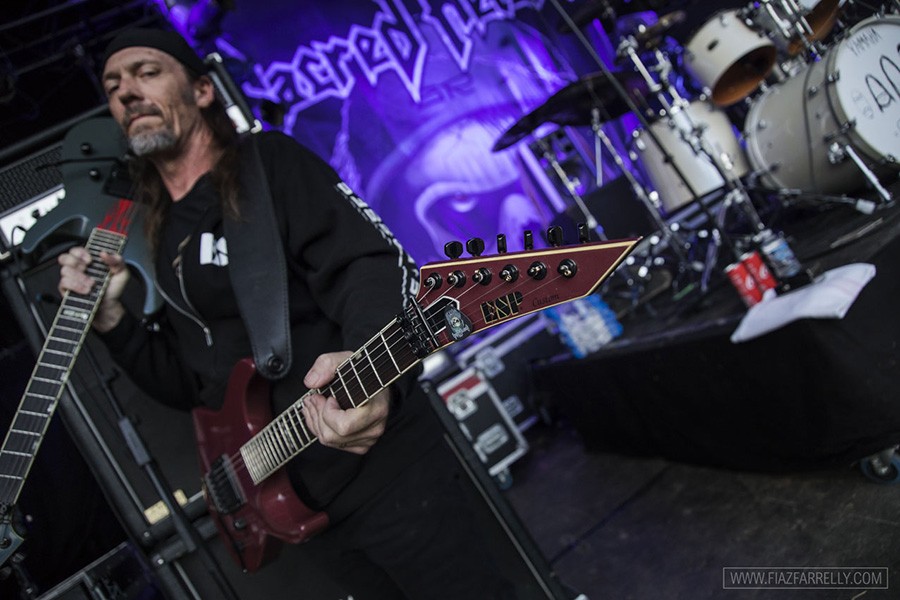 Guitars are generally judged on a combination of looks, playing feel, and tone. What is most important to you?
To be fully at home with the guitar, all of those three points have to be met. There are a few specific things that I find I need from a guitar. First is a flat top like the M-I and Mirage have. Second is a recessed floating Floyd Rose for palm muting, and to accommodate the way my hand rests on the bridge. I’d also say that EMG 81 humbuckers are essential for my sound. In terms of feel, ESP gives me everything I need, like the 25.5” scaling on the Eclipse Customs. Overall, I’m usually looking for mahogany bodies and flat wide ebony fretboards.

How do your ESPs hold up on tour?
ESPs on tour are the working man’s guitar. They’re forgiving. They don’t move around as much in hot, cold or humid environments. When they do move, as all guitars do, the ESP truss rods act predictably. The guitars with the two- and three-ply necks are amazing at keeping themselves from twisting. It’s like what you say about a great car; you keep the oil changed and check the brakes every once in awhile, and it will go forever. Seriously, I am playing guitars that are 25 years old on tour right now, and they feel great, stay in tune, and sound amazing. I have a custom order in right now for a new guitar that I will be excited to show off later. 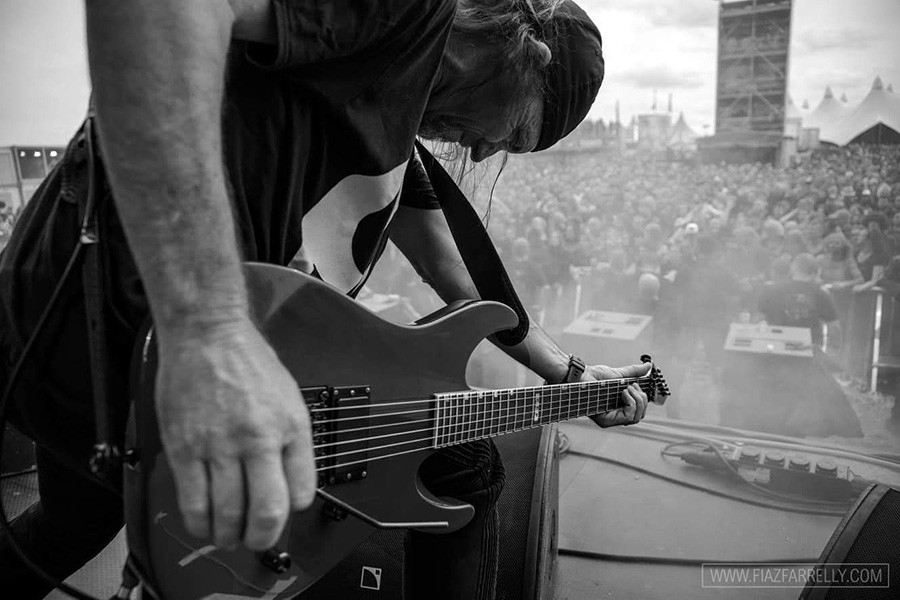 Awakening is Sacred Reich’s first new studio album since 1996. What was it like getting back together in a studio setting, and what’s the band’s process for writing new tunes?
We regrouped in 2007 when we were invited to play at the Wacken Open Air festival in Germany. We did a couple more festivals the following year. That began a ten year period of touring, playing all our old songs. A bit of a novelty act, but a blast just the same.

You guys are hardly a novelty act. You’ve been one of the most influential bands in the second wave of thrash metal.
Sure, but we had stopped doing records. It was in the ‘90s and grunge had taken over. There wasn’t really a path to success for a band like ours, and after a few years away, things just sort of faded. But we recorded the Wacken show in 2007 and it performed well. Then people invited us to other festivals in 2008. Still, we had no intention of doing a new record. We were just enjoying this as older guys, and rubbing elbows with old friends. Bands like Overkill, Dark Angel, Destruction, Death Angel, and Testament. And all these guys were like, “When you gonna do a record?”

Was there anything about the current political environment that inspired you to write new material? What’s that process like?
We’ve always been a socially conscious band. The way we do new songs starts with Phil. He writes on a LTD Eclipse guitar, but plays it like a bass with 6-strings (laughs). He comes up with something, he shows us the notes, and then we turn them into guitar riffs. I do believe that Phil had become inspired impart due to the politics of today. If you look at our history as a band and what’s going on in the world today, one could see it as a call to action. The world needs a hug. A big thrash metal hug. We’ve always been socially conscious and a bit political, and it all came together. After several years of our creative brewing being dormant, it kicked into high gear. It’s like the old story that there was a well, and then one day it was dry and we stopped looking inside. And then one day we went out and looked again, and sons a bitches, it’s full again. We couldn’t be more excited about the record. 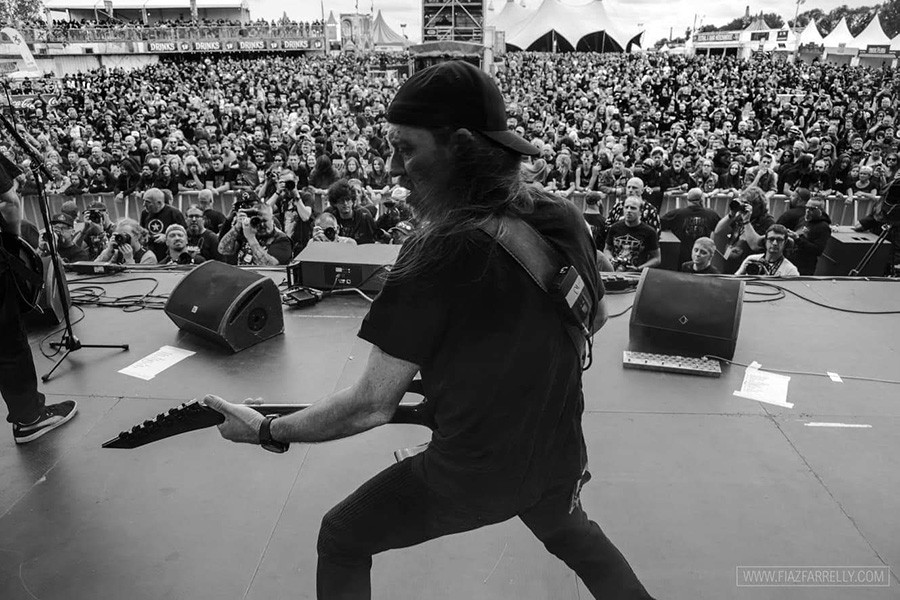 There are people who think musicians and other entertainers should just “stay in their lane” and not bring political and social messages to their recorded music and live shows, but Sacred Reich has never shied away from being outspoken about causes that matter to them.
It’s critical for us. Authenticity is a good thing. Sometimes there are bands that sing about partying, and they’re serious! After the show they’re going to get shitfaced and chase girls, and that’s what they want to sing about and do. That’s fine for them. But I think metal is also the perfect vehicle for spreading social ideas too. When we make music we have an opportunity to have an impact on or start a conversation, and those conversations matter. Metal audiences are made up of all kinds of great people, and no matter who you are or what you believe, it’s a good thing to be exposed to different types of ideas. Offering those opinions leads to a better understanding and debate, and metal has the classic “rock-n-roll” “fuck the system” attitude to deliver these messages.

A lot of young people get stuck at a certain point of developing as a guitarist and musician and get frustrated and discouraged. Do you have any advice for sticking with guitar and progressing as a musician?
The scary things should inspire you to dig deeper. There’s no short cut to getting better. In racing, they call it track time, and in guitar playing, you can call it fret time. There’s no substitute for putting your hands on the instrument and working through parts that are challenging. Work them out slow, develop the muscle memory, and then start increasing the speed. It’s just about discipline. Some people don’t recognize opportunity because it looks like work and wears overalls (laughs). Be inspired, know you can do it, then do it!

I'm thrilled Sacred Reich is touring and recording again! I got to see them twice on this tour, and I'll be catching one more show in March. Always loved their sound and it's great to see him still rocking his ESP's. 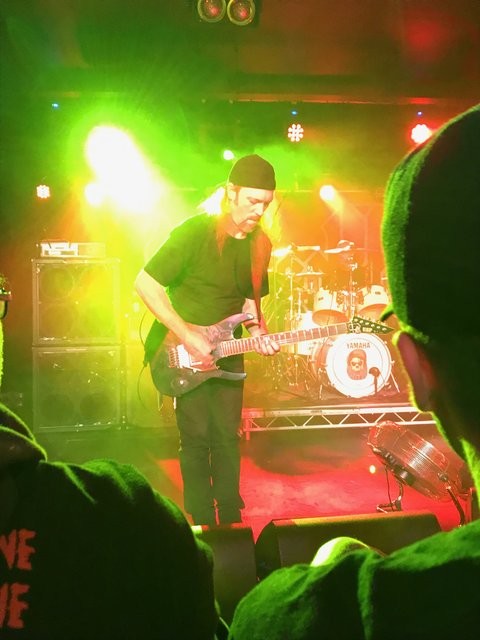 i just love listening wiley arnett..his aggressive style of playing guitar make us crazy.i was not able to attend the concert but next time i am not going to miss any of his concert.love from  best paying slots

Great music, I love it. It helps give me lots of energy! wuxiaworld

Wow this guys ESPs are awesome* ! but you forgot 1 HUGE THING ! you didn't actually show us his customs ! just a whole lot of headstock shots :( i love m1's (I've owned 2) and i was looking forward to seeing his customs !!!