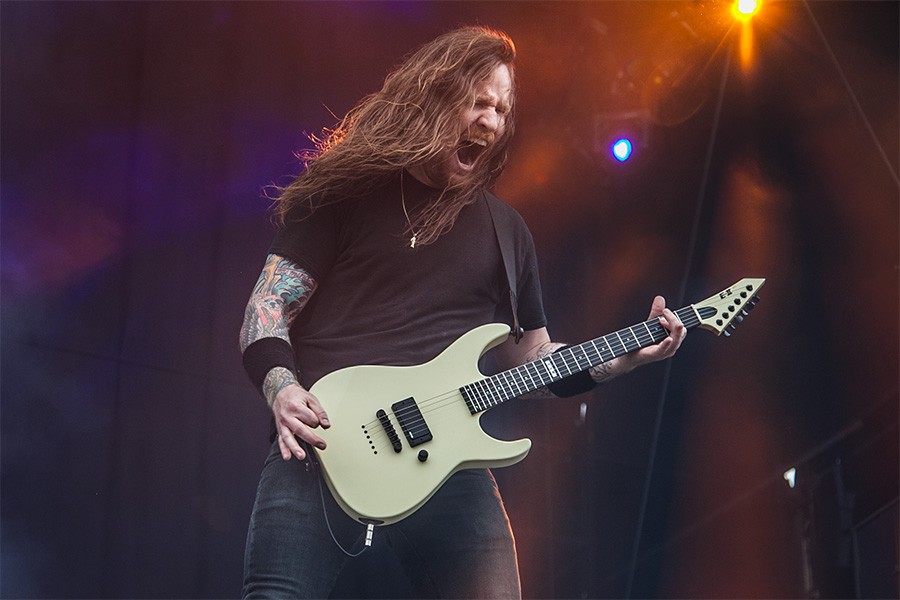 We talked to Nick Stewart, guitarist for Dallas, TX-based thrash crossover band Power Trip, just after the band wrapped up a successful tour of Europe. Between touring and a new album underway, this is a busy player from a band that’s definitely continuing to skyrocket.

Do you remember when you first heard of ESP guitars?
Yeah, I knew about ESP from watching old Metallica videos, when James got his ESP. I was a kid when I saw the video and was like, “What guitar is that?” And then I noticed a lot of blues guys who played more country rock stuff playing ESP. It was always in the back of my head. The first guitar I bought, the first one that wasn’t a hundred dollar piece of crap, was an LTD EC-1000. So I’ve been playing ESP on and off the whole time I’ve been playing guitar.

How did you get connected to ESP as an artist, and what ESP are you playing now?
Tony (Rauser, ESP artist relations director) reached out to me at Rock on the Range, and was asking if I was interested in playing them. I said I didn’t know. I wasn’t super familiar with the entire catalog of products from ESP. But then I saw the E-II M-I. A single active pickup guitar with a set bridge and one volume knob and I said, “That’s it!” I saw it on the web site and was like, ”Right now, give me one of these.”

Does the E-II M-I give you any specific advantages?
I was playing another guitar for a long time, and the problem with the guitar I was playing was that when you tour constantly, they act up in all areas. The bridge and the intonation was difficult to maintain as I was flying back and forth to Europe. If you have a expert tech guy sitting next to you to fix them all the time, that’s different, but I’m not in that category of musician. But the ESPs are built to be thrown around. I’ve intonated the guitar once and not had to mess with it since. That’s huge for me. We’re playing in standard tuning and there are a lot of parts up around the high E, and if you’re out of tune at all, it’s not good. 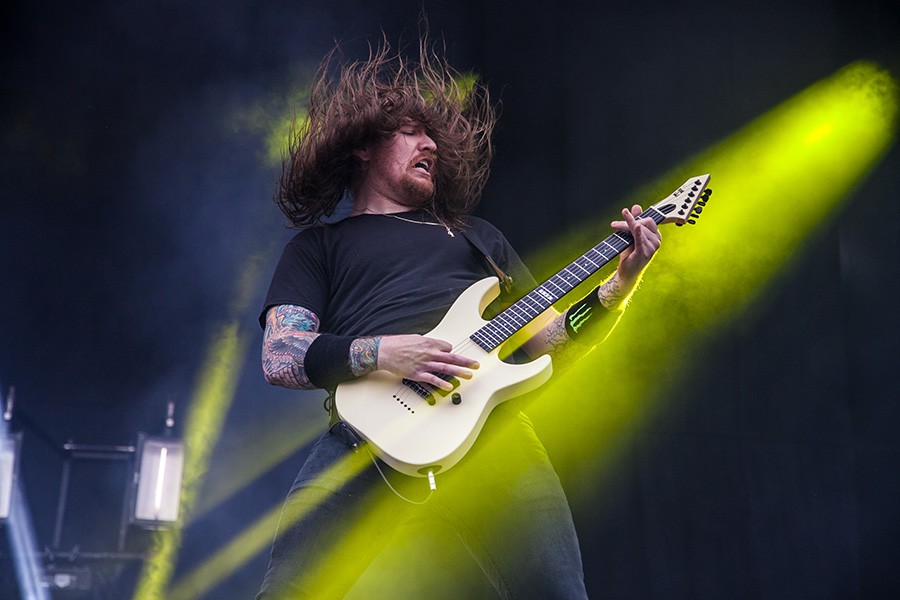 When you’re looking at getting a new guitar, the three big aspects that people look for are somewhere between the lo0ok of the guitar, the playing feel, and the sound. What’s the most important for you?
Well, you nailed it. Those are the factors. Definitely the neck feel is huge, for me at least. We’re strumming a lot, and doing a lot of picking really fast, getting up and down the board. I’m constantly going from the high E’s down to lower stuff, so the neck is a huge number one for me. But really, I’m a simple guy. I like the bare bones aspects of guitars because of my position in the band and the style I play. I’m a minimalist. When I see one knob, one pickup, I’m immediately attracted to that.

The E-II M-I has a single EMG 81. It’s an aggressive active pickup. What makes it right for your tones in Power Trip?
I’d actually like to mess around with the passive pickups at some point. But the EMG 81 always gives a little extra bite. They add on top of the overdrive that gets the tone right where we want it. We don’t like to overly overdrive our tone. We rely on the amp mainly, and then dial in the TS9 a little bit. The EMG has that extra bite. Overall the pickup is crunchy and delivers every time.

What made you start playing guitar, and how old were you?
My history as a musician is a little different than most people’s. I didn’t know if I wanted to play guitar until I was 17. I was a senior in high school and I was a huge fan of grunge rock.

Like who?
Late ‘80s and early ‘90s groove metal and grunge rock. I grew up on Alice in Chains, stuff like that. So I saw Jerry Cantrell, the DeLeos from STP, Kurt Cobain, Billy Corgan from Smashing Pumpkins, the whole grunge movement, and the songwriting in general was very attractive. Watching those guitar-driven bands, that’s what got the guitar very popular going into the 2000s. Those bands were aggressive, and they put the guitar in front of your face. 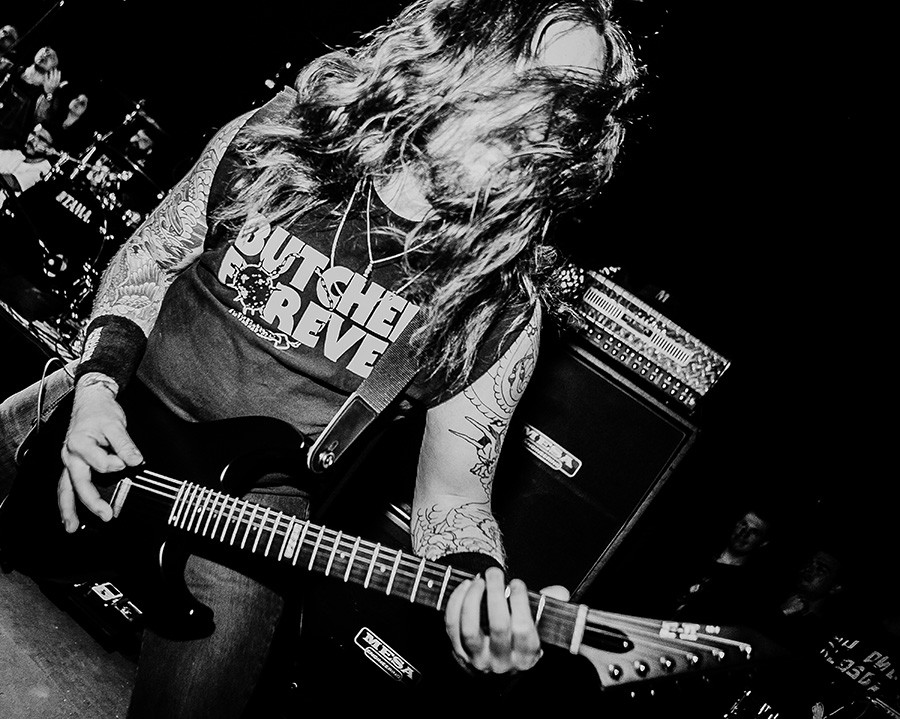 Power Trip is a great example of a true thrash and hardcore crossover sound. I’m sure you must have had some big influences in that area as well.
We all came in through hardcore. Midway through high school, around my sophomore and junior years, I got into hardcore. Hatebreed, Terror, some of those bands. That’s how I got into the deeper aspects of metal, finding the bands that the lesser fan of metal wouldn’t know about. We found Cro-Mags and Bad Brains and Warzone… you can go on forever. But in that music, there was this kind of metallic but still hardcore mix thing going on with them as they progressed through their music, specifically with bands like Cro-Mags, Leeway, and Killing Time. Many of them started out as a punk band, and transitioned into being a metal band. Seeing the evolution of that hardcore-to-metal thing they did, but keeping true to the hardcore aspect, heavily influenced the direction we chose to go in.

What’s the process for Power Trip to come up with new tunes?
As most people who follow the band know, Blake is the primary songwriter. I’ve been playing with him since high school. In fact, I’ve only ever played with Blake. We've been in three bands together including Power Trip. He’s always been the guy behind things as far as riffs are concerned. While he’s writing, he comes to me and asks opinions, but he’s the guy when it comes to the overall ideas behind everything. And he doesn’t run out of ideas. He just runs in there with this entire plethora of music, and I’m like, “Ok, this is good, this could change,” or whatever. He may or may not make edits based on my opinions, but he has a pretty good idea of the track when he demos it, and then knocks it out in a matter of days when it comes to recording. He relies on me when it comes to playing the songs like. That’s the current situation. Who’s to say it won’t change sometime down the road when we write more records?

Do you still attempt to get better as a guitar player?
Oh yeah, man! I’m still a new guitar player. I’ve only been playing 13 years. I mean, are you kidding me, man? We’re not out here doing Malmsteen. We’re a riff-driven band that keeps it stripped down, but I’m always trying to learn stuff. I’m such a beginner in so many aspects. I try and play over an hour a day if I can. That being said, I wish I could learn faster. I think that it goes with the territory that if you’re a professional player, you’re playing all the time on tour. I don’t want to look at my guitar sometimes after I come back form a tour. But it comes a point that this is my job. I need to play. I need to get better, and evolve what I’m doing.

Speaking of which, what is Power Trip up to next?
Things are exciting right now. We’re home as of today, but we have a few festivals lined up… Psycho Las Vegas and a brewery fest we’re doing. The main thing coming up is to get the record recorded. Blake’s working on that at the moment. The goal is to have that finished sometimes this fall, but we're not trying to rush anything if it's not perfect. We also just announced a tour in the fall with High On Fire, so keep an eye open for that. 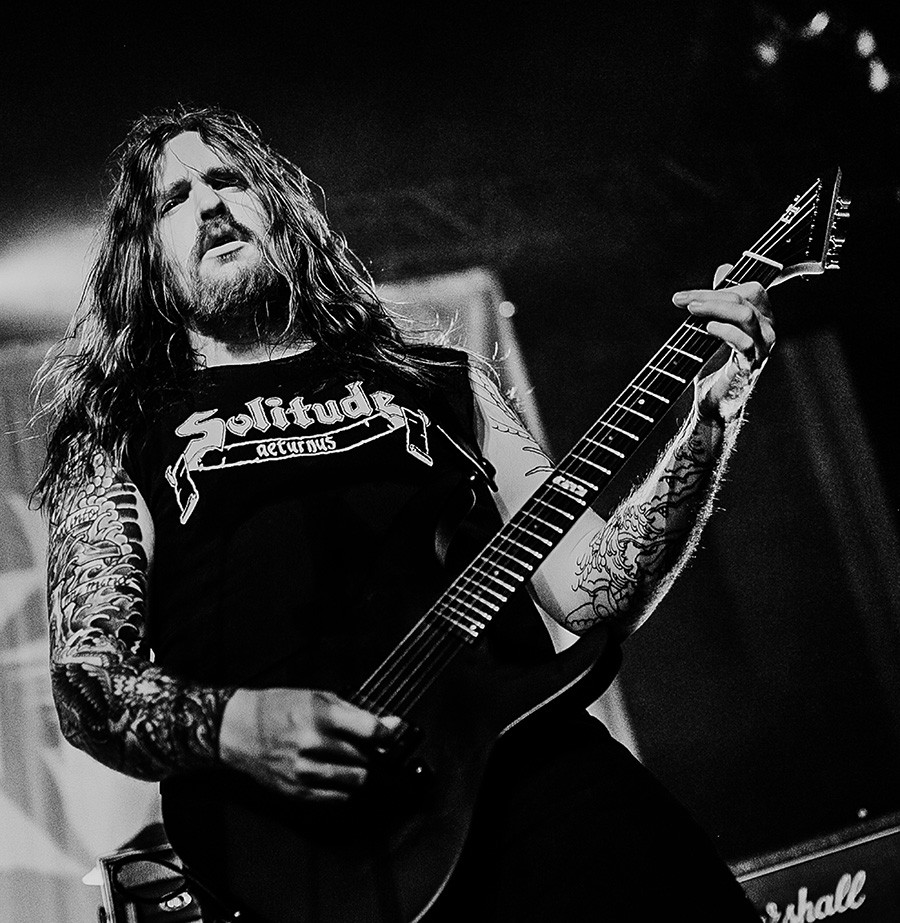 Keep up with Nick and Power Trip and get their music on their Bandcamp page.

i just love listening Nick Stewart,..his aggressive style of playing guitar make us crazy.i was not able to attend the concert but next time i am not going to miss any of his concert.love from 18ct white gold eternity ring

Nick Stewart, the guitarist of the crossover band is a great person, I really like him!

Can't wait to see this live