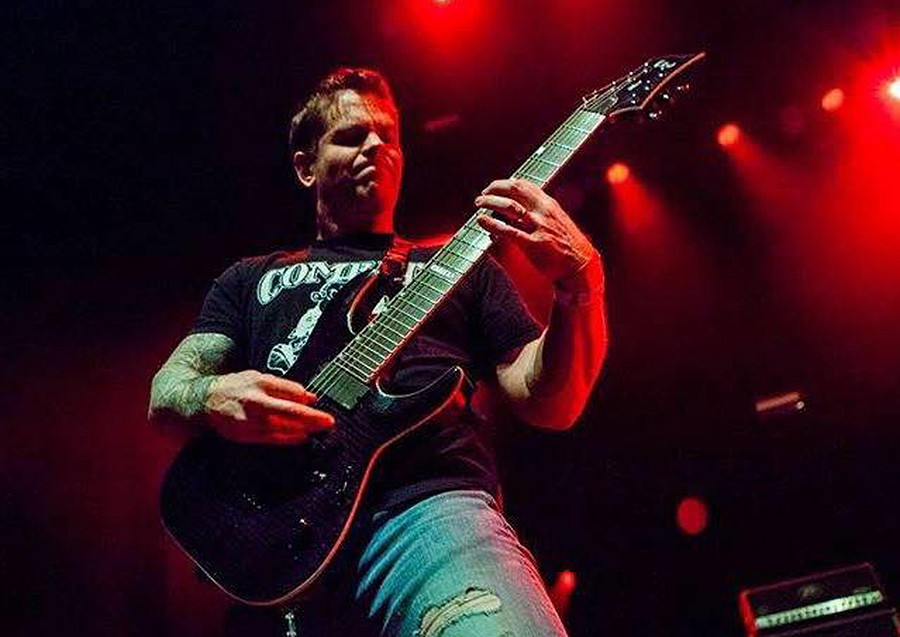 When we got in touch with Pig Destroyer’s Scott Hull, a founding member of one of the most intense and influential grindcore metal bands, he was doing the decidedly non-metal act of picking up one of his kids from school. While he made his way home with his son, we chatted about his experiences with ESP and music in general.

Do you recall your first awareness of ESP?
Yeah. I had to really think about some of this. I looked at this question you’ve asked other ESP artists, so I was ready for it.

We have to start asking some better lead-in questions.
It was 2001 when we released our first big record. Around 2003 or 2004, about the time we were recording Terrifyer, we’d gotten to the point that we were eligible to strike up relationships with guitar companies. I think the first ESP I wanted was the Stephen Carpenter 7-string. I was like, “Wow these things are amazing. I can tune to B and keep standard tuning in E.” Plus the guitar was big enough to handle the tension.

ESP’s artist relations guy at the time was super cool. I got a couple of Stephen Carpenter 7’s and used them for many years. It’s tough to remember each of the guitars I’ve used. The only way I can figure out is by thinking of what I played on different records.

I drifted over to another guitar company around 2012, and that’s where I met Chris Cannella. He’s been a super awesome guy. We’ve done stuff outside the business relationship. He played solos on my Agoraphobic record. Just a super awesome dude. When he left that company to go to ESP, by then the line of 7-string models had completely expanded and there were many more choices. I’d already been an ESP guy in the past, so it was an easy decision for me. I followed Chris back to ESP, and I’ve been with them ever since.

Even after Chris left, I knew Tony Rauser too, and John Jarvis our bass player knew him. Working with ESP has been great in every way.

What ESP model are you playing now?
The one that’s bubbled up to the top which I use consistently is an H-1007 I got a couple years ago. For a variety of reasons, that guitar has become my main guitar. Everything about it, from the action to the sound to the build quality, is perfect. 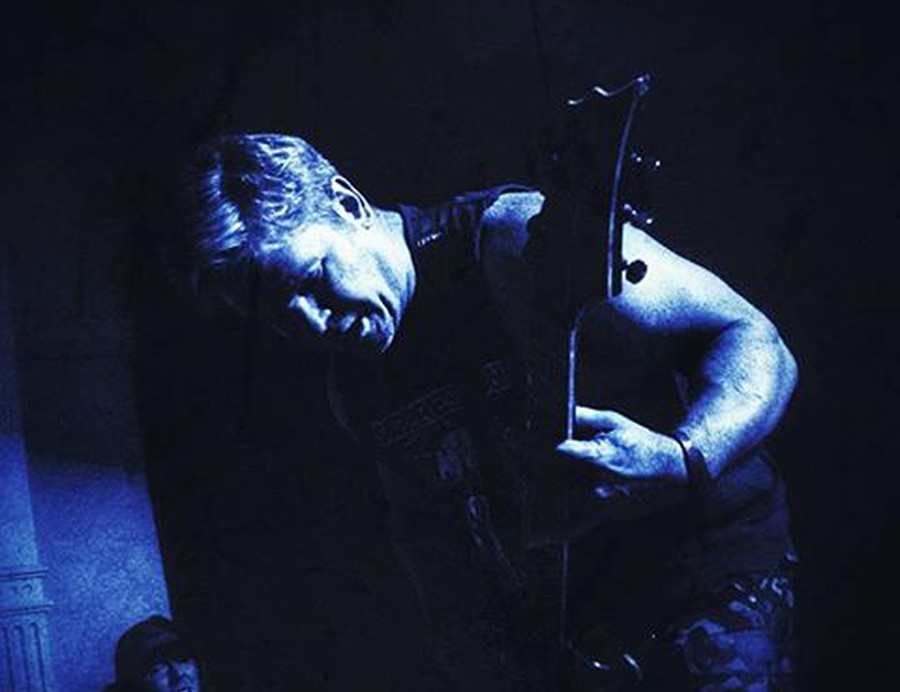 We hear from a lot of artists who can play literally any guitar they want, and the LTD Deluxe 1000 Series is their choice for touring, for recording, for everything.
For some reason, this one just works for me. Even so much so that when we were in UK, we couldn’t check bags and were faced with leaving our gear there.

I also play an ESP Horizon-II, which is a fantastic guitar as well. But the LTD H-1007 is really my main guitar. I think about what goes building a guitar, and it’s so nonlinear. There are so many factors. It’s like brewing beer. So much can change and affect the final project. Maybe the luthier is in a different mood one day. All these factors can produce dramatically different results.

We often tell people that guitars are made of wood, and there’s no possible way that two guitars can be perfectly identical.
I demonstrated this to John Jarvis. We pulled out four or five different models of the same guitar, and every single one had different tone characteristics. Then add in the differences between amplifiers, pedals, and picking styles. It’s nuts.

Tell me about the tones you expect from your ESP.
Definitely a heavy, high-gain tone, but I’ve been dialing back the gain a bit to get more articulation. I started out full gain on everything, and one day realized it’s a wall of shit. That much gain is only good for hiding bad mistakes and bad habits. It’s not adding to the music. I just realized one day that the less high-gain tone that’s layered over and over, the better the sound. With the constant high gain, you lose your transients and there’s no life to it.

One thing I like about the H-1007 is that there’s a snappy edge to it. It pops. It has a nice attack to it.

What pickups are you using? The stock EMGs?
Yes.

Is the feel of the guitar an important aspect in your decision to choose one?
Definitely yes. The balance of the guitar, the actual feel of the fretboard. I’m not one of those players who can pick up and play anything. There are guitars I literally can’t play. I’ve tried to fight with them and ergonomically, they just don’t work for me. It’s nice that ESPs have a thinner, faster neck. They are super comfortable. It’s not a super light guitar, but you gotta have some weight to it. Otherwise, it doesn’t feel like you’re playing anything. And it’s not just feel; the actual action of the guitar makes a huge difference.

How well do your ESPs hold up on tour?
Fantastic.

Do you have to do anything special to make sure your guitars are ready for the next show?
I break strings, but that’s true no matter what guitar I play. I usually have to change strings within two shows. The D’Addarios I use have the best bright tonal quality, but they’re not particularly strong. But the guitars themselves, they’re workhorses. 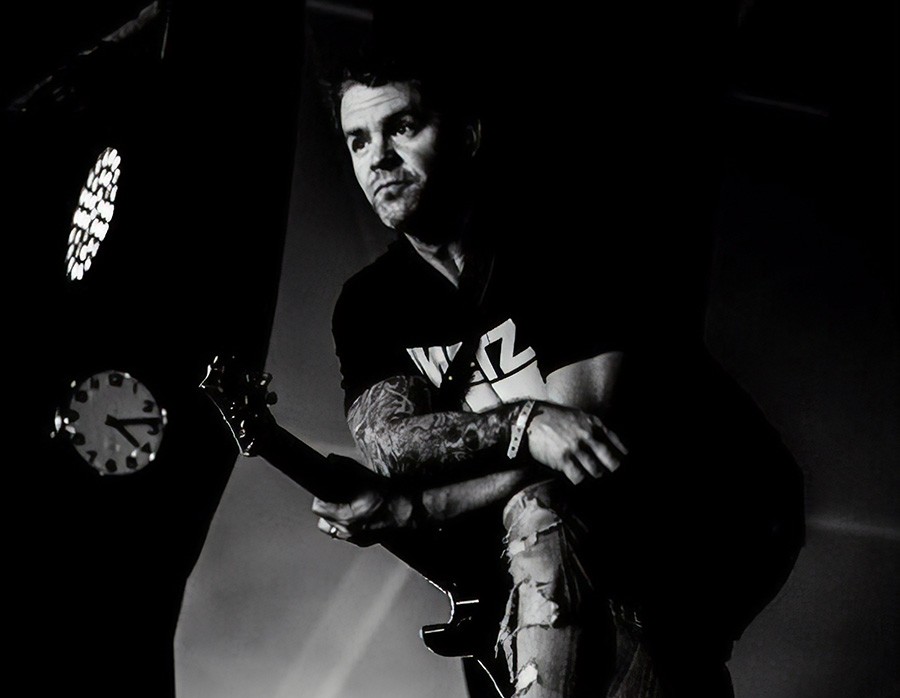 Describe grindcore and what makes it distinct from other forms of metal.
Grindcore is sort of like a mixed marriage that mixes the aggressiveness of death metal with the attitude of punk rock. Kinda like crossover was in the ‘80s, being a blend of thrash and punk. Speed without pretension, and punkiness.

Were you surprised by the huge positive response to Head Cage when it was released in September? It made a number of “Best Albums of 2018” lists.
It was definitely a relief. I’d worked through any problems we had creating the album by spending more brow sweat and elbow grease in writing each one of the songs. It’s a lot groovier than our earlier stuff, and has more complicated arrangements.

When the first single “Army of Cops” came out, this wave of trolls also came out, saying things like, “This is djent,” and so on. When the record resonated with people, it was a relief.

Does that kind of critical acclaim matter to you?
The effort that we put into the record got acknowledged. I’m extremely happy about it.

You’re a recording engineer as well as a musician. You’re the engineer credited for recording Head Cage, I noticed. What makes ESPs great guitars in the studio?
It’s a fantastic guitar for the studio because each one of them sounds great. You pick the tone you want to use and the ESP is going to work. They’re great sounding guitars and very reliable.

One thing about the studio: it’s cool every now and then to play another guitar, or try guitars from other musicians. What I found is that with other companies, even with their high-end signature lines, they feel cheap compared to what ESP produces. Bringing an ESP into the studio is basically saying, “I don’t have to worry about this part of my recording.” They play well, sound great, feel comfortable, and I only have to worry about playing the goddamn songs.

Do you consciously make efforts to continue to improve as a guitarist?
Yeah. I started playing when I was seven, and I’m now 47. So I’ve been playing a long time. I went through my Yngwie Malmsteen shredder phase, as pretty much everybody did. But I’d developed some playing habits that were holding me back in certain areas, so around 2004 and 2005, I took guitar lessons to try and break those bad habits.

Really? That’s very cool.
It’s also good when I come across something that has a genuine sense of invention. That shit inspires me. If I had to choose two guitarists to learn and draw from, it would be Pat Metheny and Allan Holdsworth.

So yes, I absolutely do try and improve, especially if there’s something I want to learn how to do. I’ll sit and take the time to learn something

What advice do you have for someone who seems to have hit a plateau in their improvement as a guitar player? What can help break someone out of a rut?
Don’t just rest on the notion that you should be entitled to be good just because you’ve been playing forever. Don’t be too proud to go back to someone who knows how to do something. Look, we’ve been playing forever, and there’s still a shit ton of stuff I can’t do.

If I hear something like gypsy jazz and want to try that out, I need to get out to the woodshop and make the effort. You gotta put your pride aside to get better. That’s something I always want to be able to do, to always be learning. Don’t ever feel like you’re “there”. If you genuinely love music, don’t ever feel like you can’t take the time to learn.

Photos provided by Scott Hull. You can listen to and purchase Pig Destroyer's music at their Bandcamp page.

I was very encouraged to find this site. The reason being that this is such an informative post. free spades online