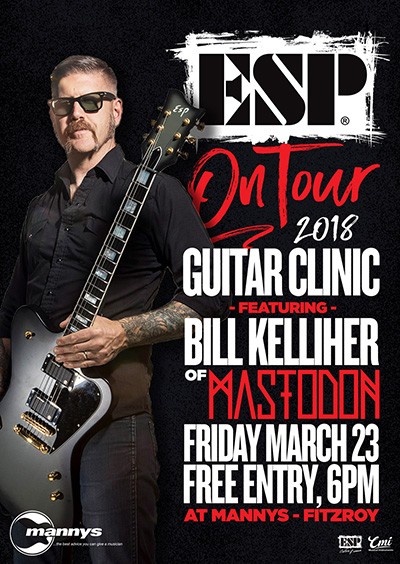 Bill Kelliher, the innovative and influential guitarist of American metal giants Mastodon, is heading down under to do an ESP clinic at Manny's Music in Fitzroy on March 23. The free event, brought to you by Manny's, ESP, and ESP Australia distributor CMI as part of their 2018 "ESP On Tour" extravaganza, starts at 4PM with some special ESP product demos and more, followed by Bill's appearance at 6PM. It's going to be a popular event, so plan on arriving a bit early.

As you're probably aware, Bill has a number of killer ESP and LTD Signature Series guitars that include the Sparrowhawk, which was recently given a new Pelham Blue finish that looks amazing. At this event, you'll not only have the opportunity to get to know Bill -- who is as cool a person as he is a great guitar player -- but can also take advantage of great deals on ESP and LTD guitars and basses.

Must be thanks for the share this great blog here it is the very nice need to install the latest version of make windows 10 look like 7 must be web users have to connect it and start the batter working forever thanks.