A Special Limited-Edition Superguitar, Made in Japan 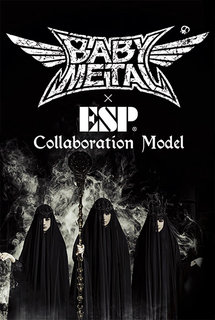 If you haven’t yet heard of Babymetal, you’re one of an increasingly smaller and smaller group of people on this planet. The band is made up of three young Japanese ladies… Suzuka Nakamoto (“Su-metal”), Yui Mizuno (“Yuimetal”), and Moa Kikuchi (“Moametal”). But its their live backing band, collectively known as the “Kami Band” — “Kami” meaning “God” in Japanese, if that gives you an idea of their talent — that includes several ESP players who make up some of the finest players in the Japanese metal scene.

Our friends at ESP Japan are introducing a new model in appreciation for the relationship with Babymetal and the Kami Band with the limited-edition ESP E-II Arrow-7 Babymetal. The guitar is a 7-string model based on the E-II Arrow-7 style, but with some killer extra touches, like the red finish on the body bevels. The ESP E-II Arrow-7 Babymetal will be available starting in February 2017 via special order only through your authorized ESP dealer. It will only be sold through August 2017. A special hard case and Certificate of Authenticity will be included.

Must be thanks for the visit here this amazing article this is the very nice so need to play the amazing Free cell solitaire card game this is the great enjoyments to all players online thanks.