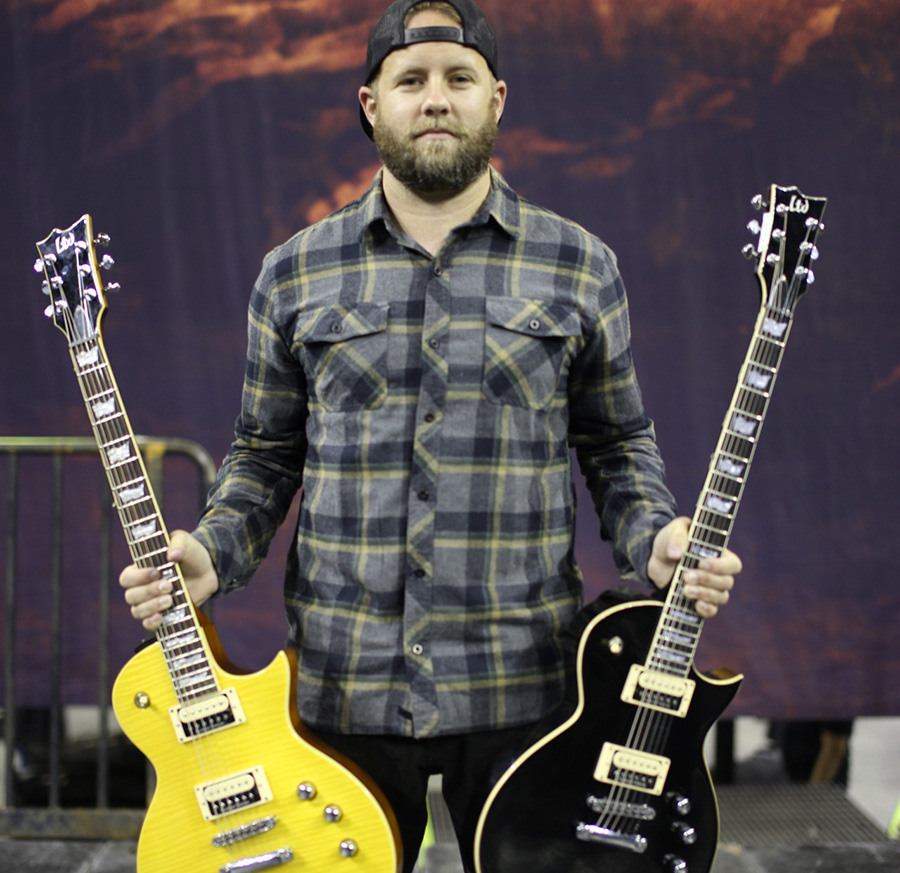 Breaking Benjamin is on fire right now. Their new album Dark Before Dawn, scheduled for release on June 23, hit #1 on iTunes’ rock album chart within an hour of pre-order availability. Currently out on the road, the alt-metal band includes ESP players Benjamin Burnley and Jasen Rauch. We caught up with Jasen while he prepared for one of their many current tour stops.

Congratulations on the success of the album and tour! We’ve seen that a lot of the dates are selling out.
Thank you. Yes, it’s pretty incredible. I couldn’t be happier with how things are going.

Tell us about your discovery of ESP and your early experiences with our guitars.
I had been off the road for about six years, doing production and songwriting. I live in Nashville, and I’d been working with different bands there. The common thread was that they all had bad-ass guitar players. So, a buddy of mine who plays for Florida Georgia Line told me to take a serious look at ESP, and he’s a phenomenal player. A week later, another buddy who is a resident guitar snob said, “Dude… ESP, hands-down.”

So, I tried out ESP, and it turned out to suit my needs better than what I was playing before. One thing that’s been frustrating for me with other companies is that the quality of guitars in general has gone down. When Chris (Cannella, ESP artist relations manager) sent me this guitar, it was eye-opening. It’s an inexpensive guitar that is light years ahead of what a lot of the boutique manufacturers offer at four times the price.

What ESP model are you playing?
I’m using the LTD EC-401. I like having a thicker-bodied guitar. I’m using them with Seymour Duncan JB pickups. I find that the 24.75” scale is a really comfortable fit. All of my guitar have 22 frets. You get a lot of harmonics in 22-fret guitars that you don’t with 24 frets. I’m a big fan of A/B-ing the sounds between guitars, and the 22-fret models work better for me. Previously, I’d have to turn to an overdrive pedal to get the sound I wanted, but with the EC-401, it’s totally sonically consistent between guitars. 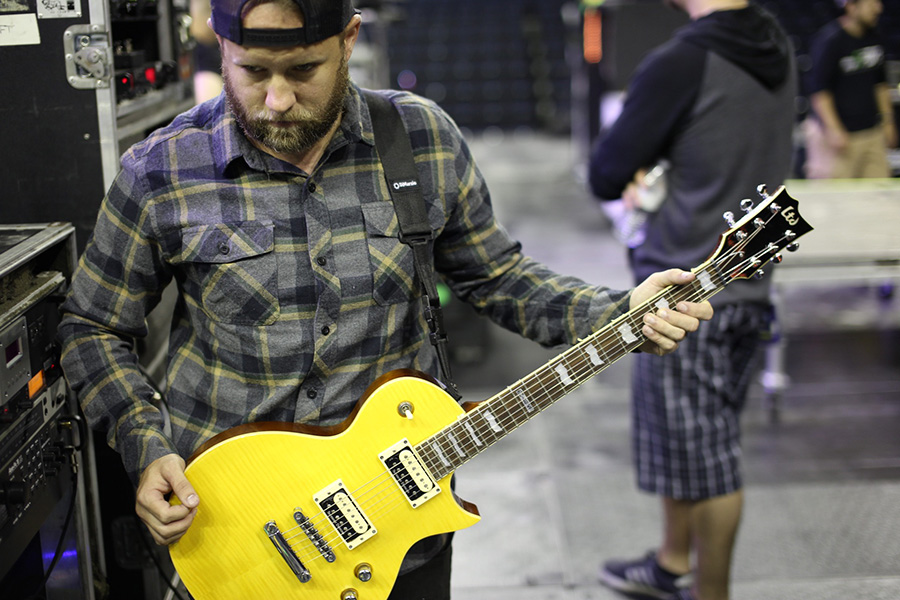 You have a preference for passive pickups, it seems.
Actually, passive pickups and active pickups both do very well. They’re just different tools. For Breaking Benjamin, there is a lot of dynamic playing. Certain sections have smaller things happening that with a noise gate just wouldn’t come across. So yes, I find passive pickups a little more flexible. I find that they’re also better for dealing with lower tunings. They’re not quite as dark.

How is the EC-401 in terms of playing feel?
I like the fact that it doesn’t have the tummy cut. For my posture, it’s just more comfortable. I really like that if I’ve got stuff coming through my wedges, it just resonates with the guitar. As far as a right hand player, I’m a downstroke guy. I play far back and anchor on the bridge. It’s second nature at this point. The EC-401 allows me to do more stuff and not be staring at my hands.

You’re literally on tour while we’re doing this interview, so it’s probably a good time to ask you about the importance of reliability in your guitars.
If it’s not there, it can be a deal breaker for me. It doesn’t matter how good you are. If your gear doesn’t work, no one’s going to be able to hear it. When I got my first couple ESPs, I noticed I could put them in the case after beating them up, and even without my guitar tech touching it, it’s pretty spot on for the next show through temperature changes, humidity changes, and all that. Those things matter a lot. Time is a valuable commodity when playing live. If you have to stop and retune, it takes up extra time you really don’t have. My EC-401 is going to be in tune, and stay in tune. It’s totally solid. The simplicity is to be what it is, and to work. It achieves all I need from it with flying colors.

You joined Breaking Benjamin in the last couple of years. What’s it like to be thrust into a band with that level of success?
It’s been great. It’s really been the most seamless transition. I really enjoy the dynamic of the band. We’ve all known each other for ten-plus years. Ben and I have written several songs together on both Breaking Benjamin and Red albums. We already had that common ground. So, getting the opportunity to integrate that into a band setting, and then a live setting… it’s both humbling and rewarding. It’s a lot of fun to play with these guys. It translates to the live show as well. All the pieces seems to fit. It makes for a better show for our fans, and a better touring experience for us.

We have many customers who are just getting started on guitar, or perhaps they’ve been playing for a few years and are looking for some advice to step up to the next level. What would you say to them?
First and foremost, the player makes the gear. The gear doesn’t make the player. The more confidence you have, the more comfortable you are, the more it translates to your sound. With ESP, it just makes my job easier, because everything works seamlessly. I remember flipping through guitar catalogs seeing what artists were playing. It’s easy to get fixated on that. Find an instrument that you’re happy with that allows you to do your job. That will raise the ceiling as to what you want to do as a player. 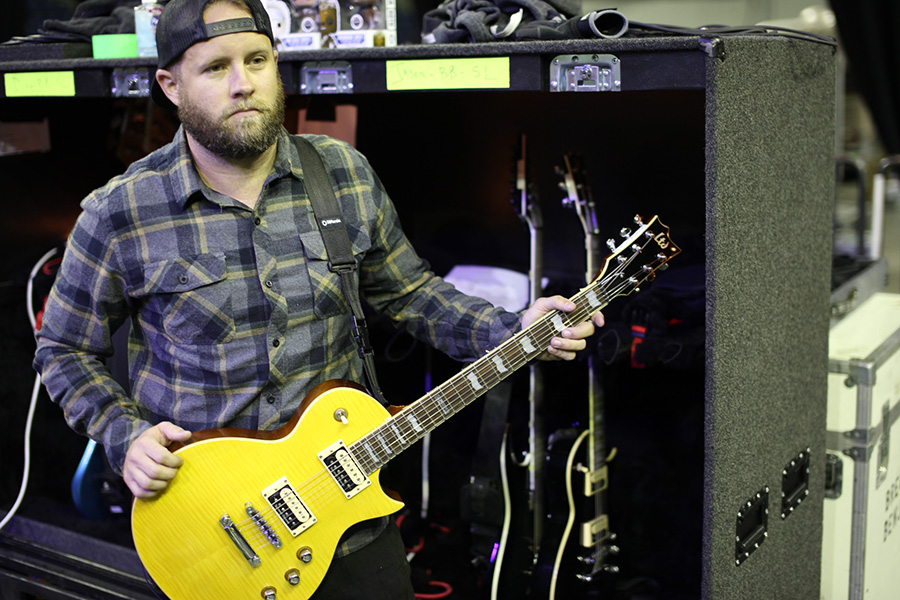 Great interview and the new BB album is great. Someone asked me what I thought and I said its BB they didn't try to do what they aren't suited for and that's what makes them a great band.

For sure an amazing artist. Keep on rocking, Jasen! \m/