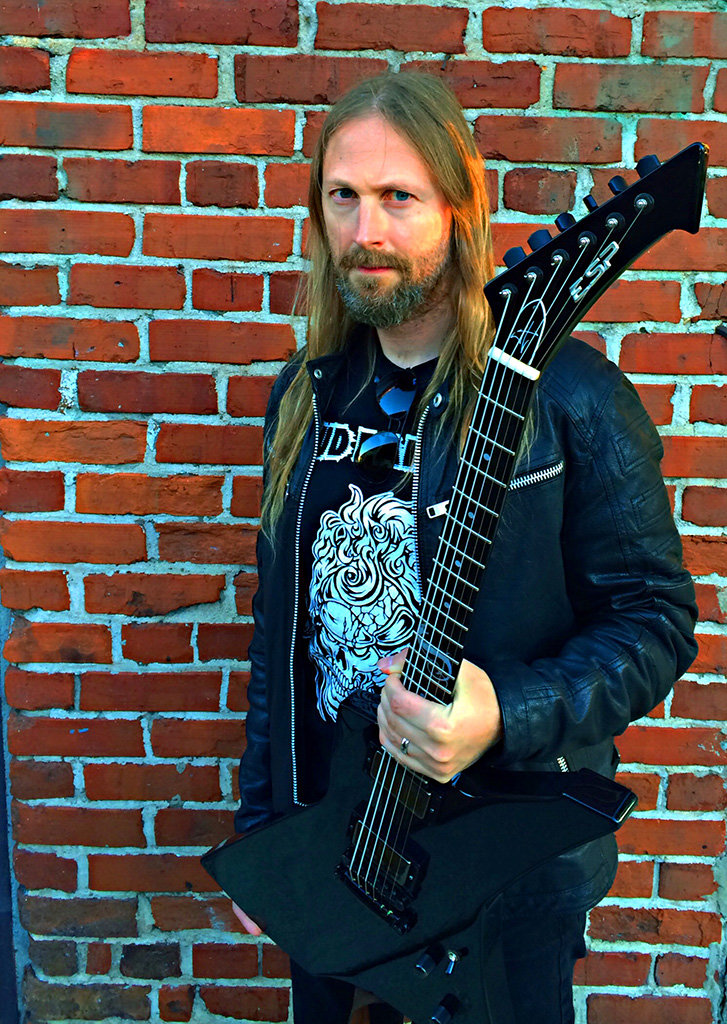 Johan Söderberg, who has been rocking guitar with Swedish melodic death metal band Amon Amarth since 1998, has been using the ESP James Hetfield Signature Snakebyte on his current tour. He sent us this review from the road:

On this U.S. tour, I'm using the ESP Snakebyte for the first time. We're about halfway through the tour now, and I have to say, this guitar is the best guitar I've ever played. It's a pretty expensive guitar, but you really feel the difference in quality on an instrument in this price range.

It's got Sperzel tuners that, in my opinion, are the best tuners. They are milled out of steel and have awesome precision. This guitar stays perfectly in tune for our entire set (which is sometimes 100 minutes). I think this has a lot to do with the wood in the guitar not being so sensitive to temperature changes. The exceptional quality of the build definitely adds to this guitar’s tuning stability. I can't thank the ESP Custom Shop enough.

I guess James Hetfield, who designed the guitar, doesn't use the tone control, because this guitar doesn’t have one. Instead, it has two volume controls; one for each pickup. I never use the tone control either, except sometimes I hit it by accident when I’m playing, and don’t realize it until halfway through a song. So, in my opinion, that being gone is a huge plus as well.

The neck is probably the best thing on this guitar. For example, on other guitars I’ve used in the past, the A on the fifth fret sounds different than the open string A. On this guitar the sound is much more equal throughout the fretboard. The resonant chug sound when playing palm-muted is also more equal over the fretboard compared to other guitars. This guitar has more sustain and the sound has more punch than any other guitar I’ve tried. It's pretty much the Rolls-Royce version among EX shaped guitars.

Amon Amarth is still touring the USA for the next few weeks, and you can check out Johan and his Snakebyte for yourself. Visit here for info on their tour dates and tickets.

I`ve had an experience to try this guitar. The sound is not bad, but it takes time to get used to it

It is indeed on the best guitar I've seen  including the sound. insurance cincinnati oh

Wow, I like your guitar and your style I am your big fan I am a professional writer in UK academic industry, and I am learning guitar writing and best play guitar is my dream.

It helps me to remember youngsters who owe their lives to their folks who pay for their sustenance and safe house, yet end up steamed and dissatisfied towards them. It appears as though they imagine that they do have moral obligation over their lives Essay Help UK anyway they accuse their setback for the legislature instead of picking the more excruciating choice of pointing the finger at themselves. For this situation, I would state yes to your inquiry.