Guitars in the LTD 1000 Series are designed to offer the tone, feel, looks, and quality that working professional musicians need in an instrument. The H-1001QM is simply an excellent all-around guitar for every playing style and musical genre. It includes high-end components like LTD locking tuners and a Hipshot bridge with string-thru-body design, as well a highly-acclaimed set of Seymour Duncan pickups that are directly mounted to the guitar’s mahogany body. It comes with a figured quilted maple top and matching headstock with a See Thru Black Cherry or See Thru Green finish, accentuated with body/headstock binding with abalone purfling and constructed with a set-thru three-piece maple neck for speedy access to the highest frets, and a Macassar ebony fingerboard with 24 XJ frets. Excellent for metal, rock, progressive, blues, fusion, or any kind of music where you want to stand out from the crowd. 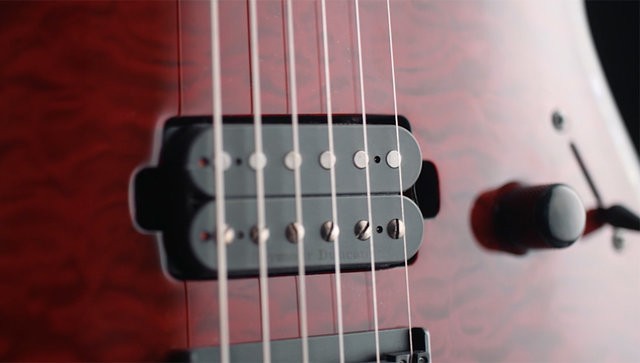 Jeff K.
0 Comments
The LTD Deluxe H-1001, available in See Thru Black Cherry and See Thru Green, is simply an excellent all-around guitar for every playing style and musical genre. Its features include a Hipshot bridge with string-thru-body...
MORE »
Like (0) Dislike (0)
Subscribe
Comments
Please log in or sign up to comment.

Please make with purple flame, it must become cooler guitar ever

Thanks for your suggestion Ridho!

MAKE THIS IN SEE THRU BLACK OR VARIANT AND I WILL PULL THE TRIGGER AND BUY THIS MODEL!!!

Hey John, got it, thanks for your suggestion.

I love this guitar and am getting ready to order it. Why can’t iget a see thru black?

Hi John, WE only offer the 2 colors you see on our site, but we've noted your suggestion for future development. Thanks for your comments and suggestion.

I OWN this guitar, in green, and everything is visually spectacular!! I've been a visual artist for 55 yrs, and I wouldn't change anything! If I didn't play, I have for over 55 yrs, I would hang this instrument, and look at it, a lot!! As far as the complaint about three of the tuners being under the headstock, I would refer you to a youtube video entitled, "And your excuse is what" that starts with a guy playing guitar, with his feet, because he has no arms!! Oh, and he has the biggest smile on his face, ever!! Just "keepin' it real" You guys keep building the best guitars for the money that I have EVER played, and over the years, I've owned HUNDREDS!! Oh and the bass I just bought is ridiculous as well! My guitar tech, here in Austin, who also happens to BUILD basses, thought it was really nice as well!! I'm beginning to get arthritis in my hands, and don't have an issue with "reaching under" to tune, really?? Anyway, I'm looking forward to my next ESP guitar. I don't know which model it will be, but I know it will be The best guitar all around that I can buy for my money spent!!!

Hi Gary, We appreciate all your kind and generous comments and are thrilled to hear how much you like your instrument. Thanks for sharing your experience and thanks for choosing ESP!

The old h series headstock was gorgeous. Are you planning on bringing it back?

Hi George, There are no plans at the moment but you never know......thanks for your suggestion.