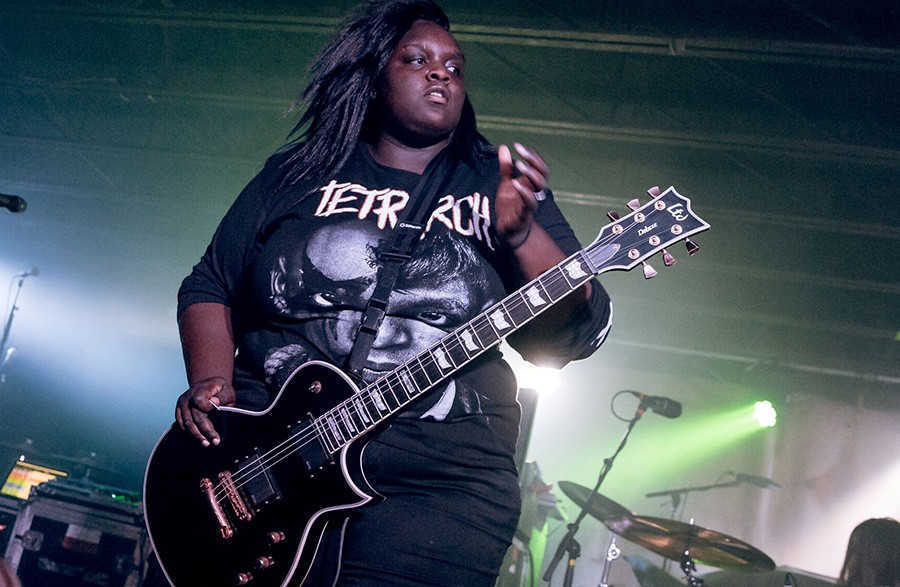 It was the day before Halloween when we got to talk to guitarist Diamond Rowe of Tetrarch, the metal band that was founded in Atlanta in 2007. Their new album Freak, released on September 29, debuted at #3 on the iTunes Metal Chart and #17 on the iTunes rock charts. It’s quite an amazing accomplishment for a young and talented guitar shredder who doesn’t look like most of her metal contemporaries.

Diamond, it’s great talking to you and we’re really happy to have you in the ESP artist family.
Thank you! I’m happy to be part of the family as well.

Do you recall when you first discovered ESP Guitars?
Probably like a lot of other people. I saw a video of James Hetfield of Metallica, playing his white ESP EX guitar with “EET FUK” on it.

Were there other artists who you made an early association with ESP early on?
There were many while I was learning guitar and growing up. Beyond James and Kirk Hammett, there were other guys like Alexi from Children of Bodom, who is another favorite of mine. Him and Dan from Atreyu, as well as Bill Kelliher of Mastodon.

More recently, one of my good friends, Bill Hudson, is a huge advocate for ESP. He piqued my interest in ESP a little later. But all the time, a lot of my favorite guitarists played ESP.

We know you have a few different ESPs. What model are you playing now, and what’s your favorite?
I just got a brand new one, and it’s my current favorite. It’s the see thru black EverTune EC-1000. I had never played a guitar with the EverTune bridge. I love it. Also, it has Duncans.

You’d been using guitars with EMGs before. What advantages do you find in passive versus active pickups?
It’s crazy. All my other ESPs have EMGs. The first time I saw it, I noticed it had Duncans. What I really like about them is that you can really hear the tone of the player. EMGs have their sound, and I like that too, but I feel like with the Duncans, you really hear the character of the player, which is new for me.

I should also say that I love my Stef Carpenter seven-string.

Let’s talk about how Tetrarch got started.
Me and the rhythm guitar player and singer, Josh, met in middle school, in 7th grade.

Were you already playing guitar at that point?
I had just started playing guitar, and right away, I wanted to join a band. But I wasn’t very good. They had a little band, and I was like, “Can I jam with you guys?”

What was the reaction?
The first reaction was, “We don’t want a girl in the band,” but then the drummer was like, “We should give her a chance.” (laughs) Luckily, it went pretty smoothly, and the rest was history.

How did things go from there?
Like a lot of bands, it was a gradual process. As time went by, we realized that we wanted to do it seriously, and started getting more gigs through the end of high school and into our first years of college, which is when we started touring. But we figured out early on what we wanted to do. 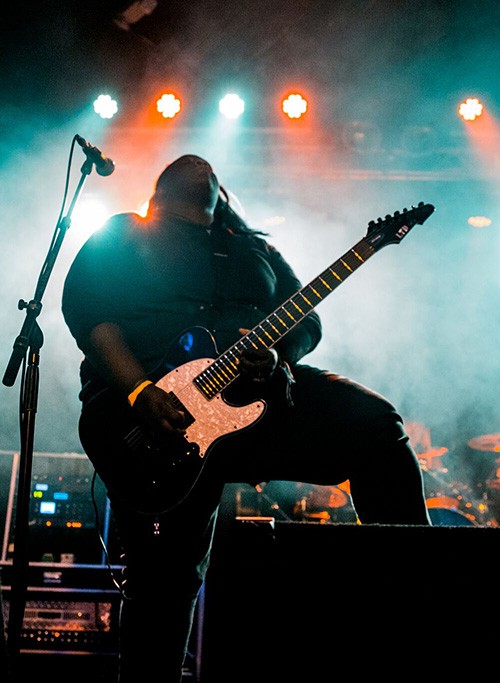 Probably 90% of the people in the world of metal bands are white and male. What initially attracted you to metal?
I have never been very normal. My favorite sports coming up were motocross and hockey. I was a super good softball player. I met a friend in high school who was a little older than me, and she was really into grunge bands like Nirvana and Pearl Jam. I was like, “Let me check out these bands.” At the time, I was into hip hop. I listened to Nirvana and said, “You know, this is kinda cool. I dig it.”

So at the same time, I bought Nevermind, and gradually went into heavier stuff. It matched my personality. It was more aggressive.

Has there been a specific reaction, good or bad, with audiences who might not be expecting to see a black woman shredding in a metal band?
There’s definitely been a reaction. I’m happy to say that 99.9% of the time, it is positive. Maybe one time, as a kid while we were doing our first shows back in Georgia, a guy said something like, “Blacks don’t belong in this kind of music,” but that has thankfully not been the normal reaction.

There have been times that someone has come up to me after the show and said things like, “Oh, I saw you setting up and I thought you were the band’s manager,” or told me they were curious as to how this band was going to be when they saw me. But then they always say that they were impressed afterwards.

I now actually think of it as an advantage to me, and to the band. It’s something unique that most bands don’t have.

That’s really good to hear. Let’s get back on the subject of the guitar. When you first pick up a guitar, how do you know it’s going to be right for you?
My answer is interesting in that most people may say the opposite, but I can’t do with a lightweight guitar. I want to feel like there’s something around my neck. My very first guitar was heavy, and I got used to that. My first Eclipse was a full-thickness CTM. My Stef Carpenter guitar is also heavy.

Other than that, I’m generally drawn to single-cutaway shapes.

Is neck feel important?
My only consideration is that it’s not too thick, and not too narrow. I like the medium-sized necks, like the one on my new EC. That is the perfect neck for me.

You were about 12 when you started playing. Who were your early influences, then and moving forward in your life?
One thing I was taught while growing up and learning to play is that you should play like yourself. It takes some time, but that’s the ultimate goal of any musician. Some people I listened to were Mark Morton of Lamb of God, Jim Root and Mick Thompson of Slipknot, and of course James and Kirk from Metallica, and Dave Mustaine.

But even with shreddy players, I appreciate guitarists who know how to serve songs well. I was never a lead player that liked to shred over everything. Serving the song has always been my goal. 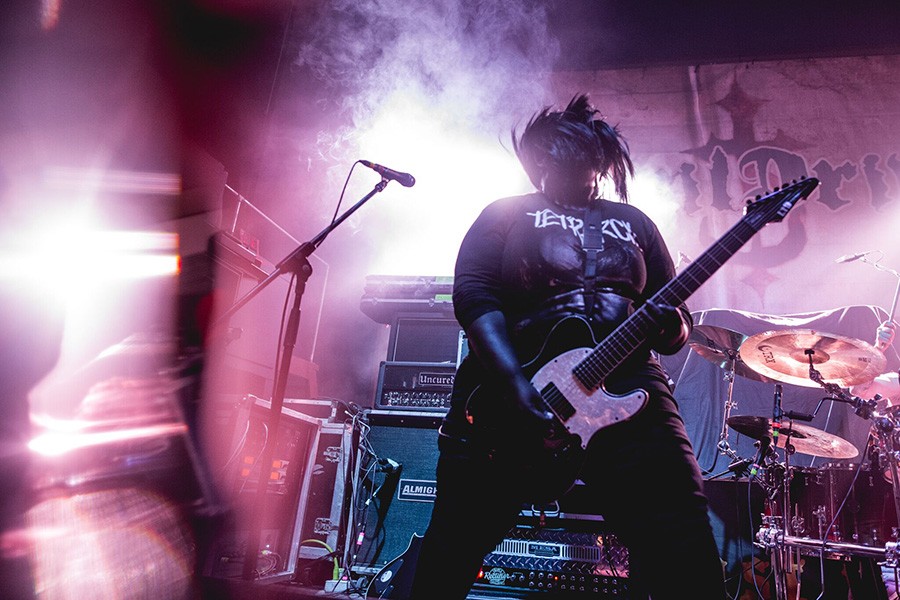 Do you try and continue learning and growing as a guitar player?
I always try to stay excited about it. A lot of the people who stop playing, it’s because they lose interest when they don’t continue to find things that excite them.

What keeps you interested and motivated to play?
I like learning new songs from my favorite bands that come out. There’s nothing like that feeling. I also continue to learn different types and styles. Not becoming stuck in monotony is important. I like to make sure I’m getting better. At any time, it’s like, “Alright, today I want to work on triplets, or sweeping, or whatever.”

A lot of the guitar players we talk to say that it’s good to play with other people who are better than you to push you out of a rut.
We’re just coming off this tour with DevilDriver, and I was just watching them every day… watching Mike and learning. I’d be like, “How do you do that?” You can really improve quickly when you have other players around to inspire you. No matter what level, you should always want to learn, ya know?

Keep up with Diamond and Tetrarch here.

It's nice to read and learn about you, wishing the very best for you and your band!

Cool band. Never heard them before but it was cool